Trains and Automobiles: Riding Across the Interior of South Africa

Left Cape Town under another blanket of gray cloud and threat of rain. The first few hours out of Cape Town on the train were beautiful with dramatic scenery of steep stark mountains rising straight up from fertile valleys of bright green vineyards and golden wheat fields. The occasional shanty town, seemingly in the middle of nowhere, appeared. Once I saw several ostriches running across the fields. 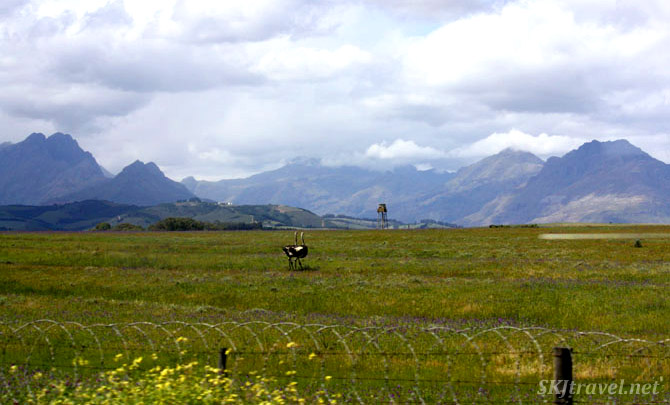 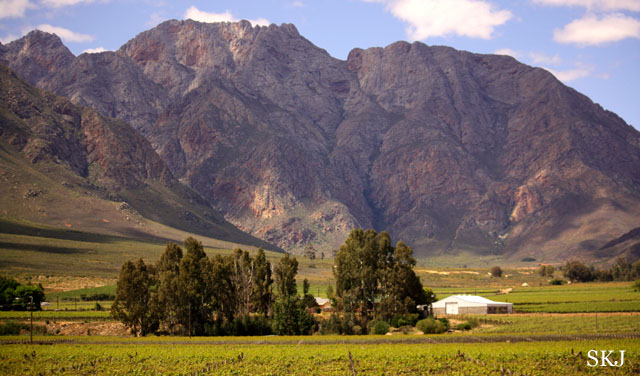 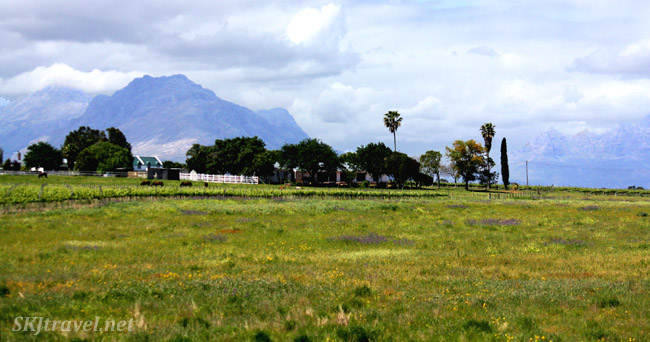 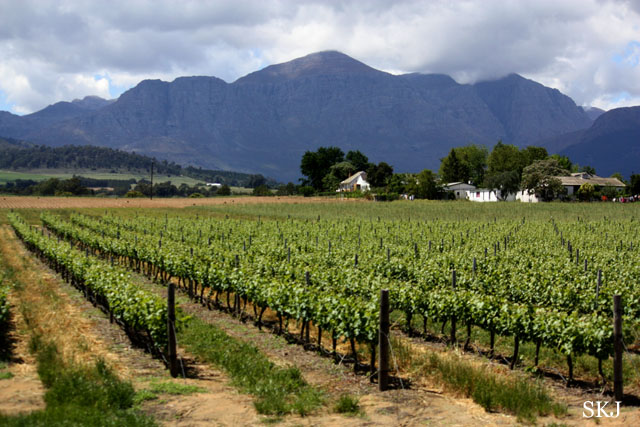 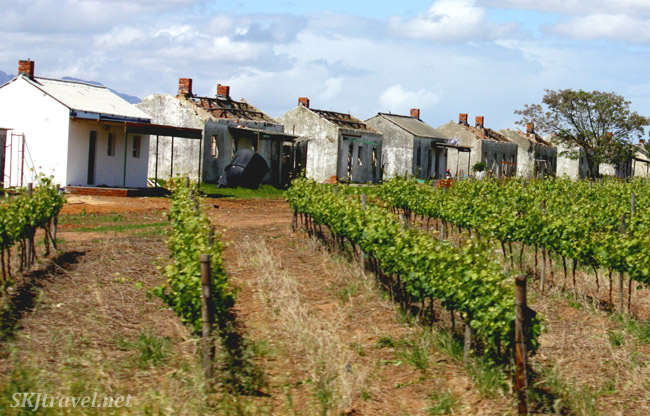 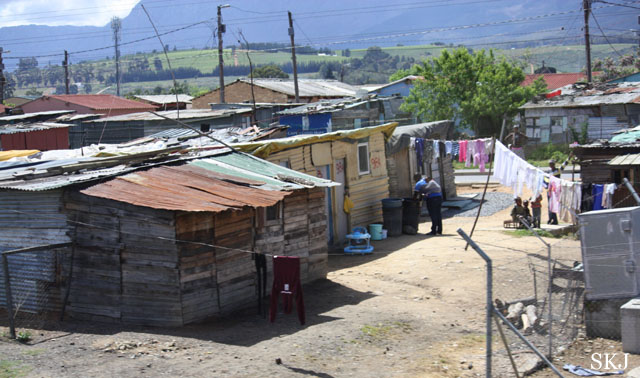 After traveling through the longest mountain tunnel in southern Africa, a 13-minute ride, we emerged into a completely different ecosystem of scrubby proto-desert. Very dry, mostly flat land. At one point a high mountain range rose up far in the distance. But mostly sparse desert land. The train itself is lovely. We have our own private compartment. All meals plus high tea are included in the train fare. Nice food so far. I feel a bit chilly, so I’m sitting in my compartment typing with the thick robe they provided (there are showers available) on as a coat. 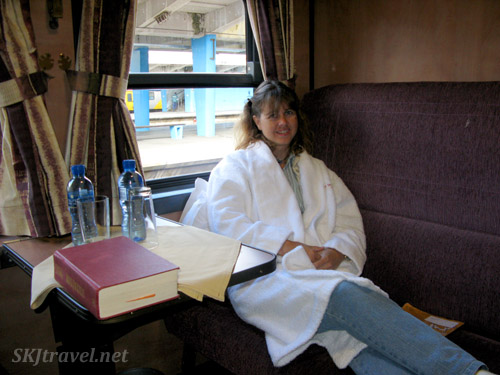 The scenery isn’t so interesting at the moment. Erik’s reading Bryce Courtney’s “Tandia,” a sequel to “The Power of One,” which we found in a used bookstore in Joburg.  We both got so much out of The Power of One, not just as a great novel, but many informative things about South Africa…. we are often pointing out “oh, just like in Power of One.” Highly recommended book. The boarding school social system described is apparently still in place; when NCM told about his school days, I would have had no idea what he was talking about if I hadn’t read the book. 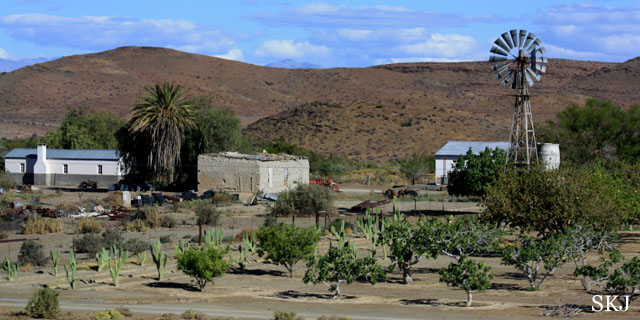 And you won’t believe this, but our fellow South African train passengers are very friendly. Who could have guessed? (p.s. if you have just joined us, we have been overwhelmed by South African kindness so far) Probably the majority of passengers are retired folks in the wealthier tier.  At lunch, an older couple sitting across from us invited us to sit at their table in the dining car, since the views at that time were better on their side. (With that exception, the views have mostly been best from the side that we look out of in our private compartment.)  Had nice interesting conversation and they told us many informative things about the country. At high tea, a group of 4 retired folks (2 couples) invited us to sit at their table, just because it seemed to them it would be more comfortable than the bar stools we had started to sit at. Again, brilliant folks who have given us some valuable advice for our upcoming travels through Lesotho and led us through nostalgic ruminations of days past on the premier trains as both regular passengers and the men rode the trains when they were in the military service. One of the men was particularly upset to hear of our truck rental woes and took down the name of the company to give to his friend at the equivalent of the SA BBB.

Watched the stars shining bright in the deep darkness of the interior of the country outside the window. Orion is on his side here, it’s strange to see him, either sleepy or slain. Then in the middle of the night the train came to a standstill in the middle of nowhere, and stayed that way for many hours. Another train had broken the power lines and we had to wait for a diesel engine to come fetch us and tow us onward. We are now at least 6 hours behind schedule. This will have implications for our continuing itinerary. 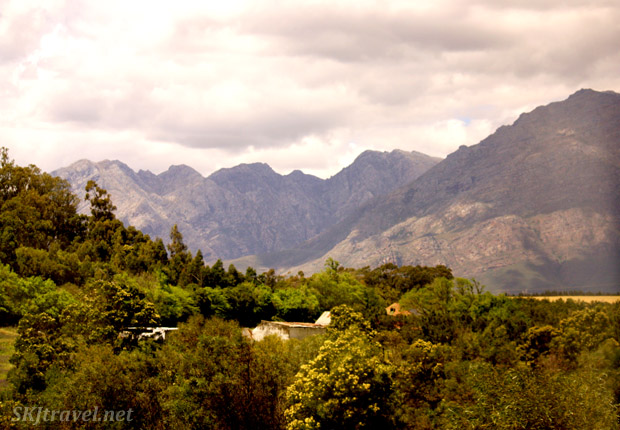 And here's another shocker in light our experiences to date with the vehicular gods who for some reason loathe us: when we got to the Joburg airport to pick up our new rental truck from a different company, the battery was dead as a doornail. So another hour’s delay as we had to insist on getting a different vehicle despite them jumping the car and claiming it was good to go. So our plans for the day were shot. But we decided to drive as far south as we could before stopping for the night. Found a room in a family hostel – was essentially a garden shed turned into a bedroom. I actually thought it was pretty cute. And we brought with us the rain.  Apparently the first rain they’ve had since April (similar to Pretoria). So we seem to be very good luck for the folks here, towing the rain on our bumper.