Florence is one of Italy's many amazing cities, which I only spent two days in, so only hit the highlights and took photos of two of them. Firenze, which we call Florence in English, is most famous as a base of the powerful Medici family and of Michelangelo to whom they were patrons. I had read the book, The Agony and The Ecstasy, by Irving Stone many years previously and so I appreciated a lot of the sights we saw here from having read that biographical novel of Michelangelo. Even if you never visit Florence, I recommend this book.

We visited the Accademia dell'Arte del Disegno where Michelangelo's famous statue of David resides. It's not so much inside a museum like most other famous works, like say the Mona Lisa in the Louvre; rather, a museum was basically built around the statue. The hallway where you queue for a long time to get into the atrium with David is lined with other marble statues and carvings that are interesting, but you go there to see one thing: David. We weren't allowed to take photos inside, but I wrote an essay about this experience, as my reaction to the statue surprised me. You can read "Approaching David" HERE.

We strolled through the world-renowned Uffizi Gallery and took in the Ponte Vecchio bridge and a few other sights. The architectural highlight was the Duomo and the Baptistery.

So my pictures are nothing unique or meritorious. This trip was so long ago that I only had a digital point-and-shoot camera. Though I think Canon's S and G lines were exceptional for point-and-shoot. But to share with you what I did see -- either to inspire you who haven't been or to reminisce with you who have .....

Here we have the magnificent exterior of Florence Cathedral and bell tower. The cathedral goes by several names, often simply The Duomo, or its official name, Santa Maria del Fiore. The cathedral was built on the site of the 7th century church of Santa Reparata, whose foundations can still be seen in the crypt. The cathedral was begun at the end of the 13th century by Arnolfo di Cambio, and the dome, which dominates the exterior, was added in the 15th century, designed by Filippo Brunelleschi. 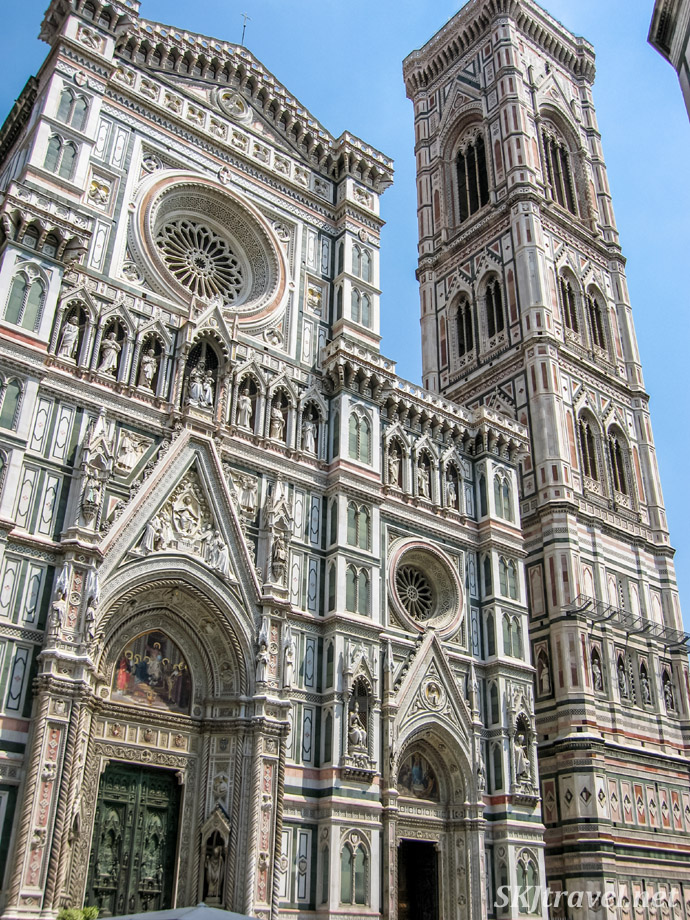 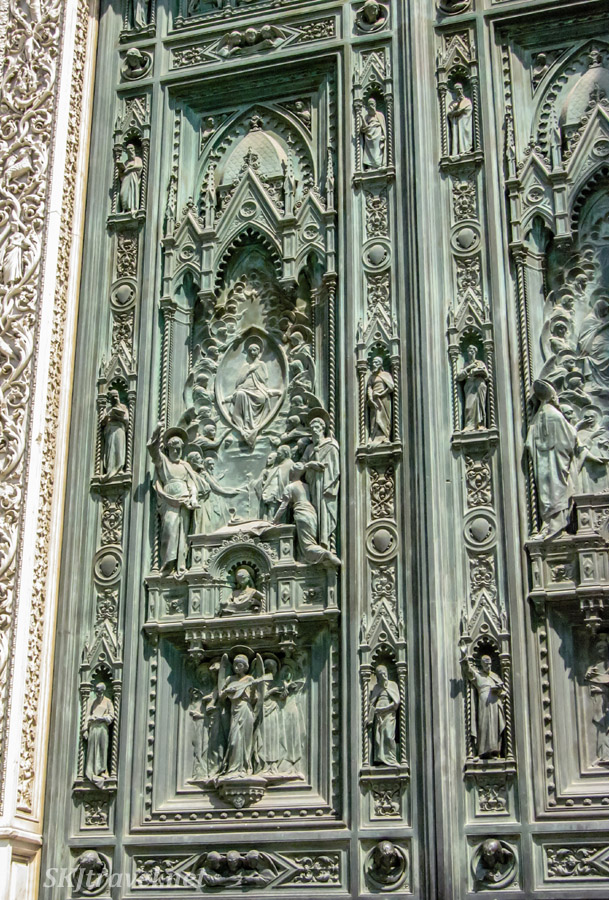 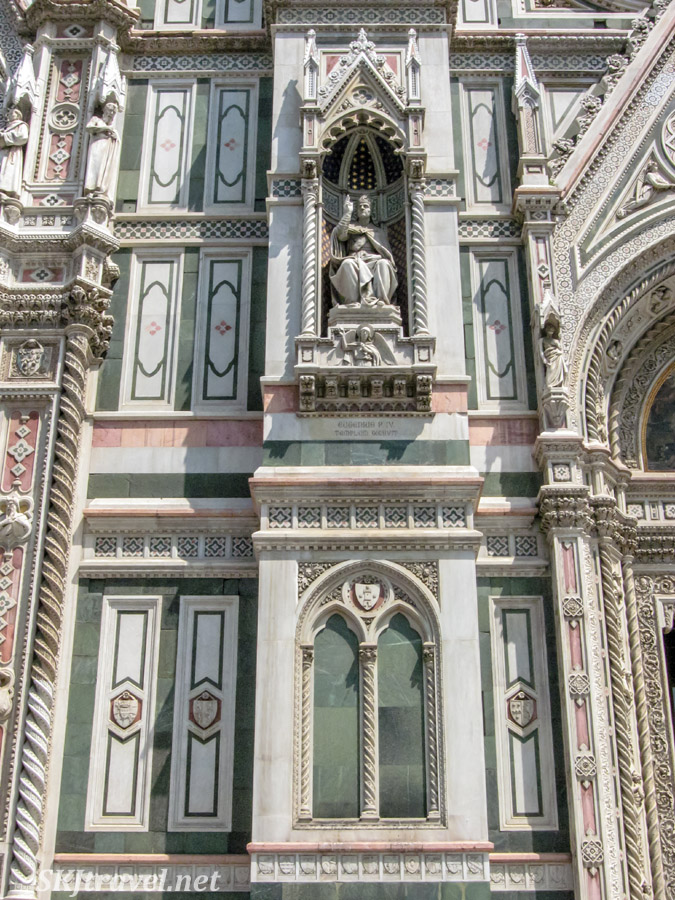 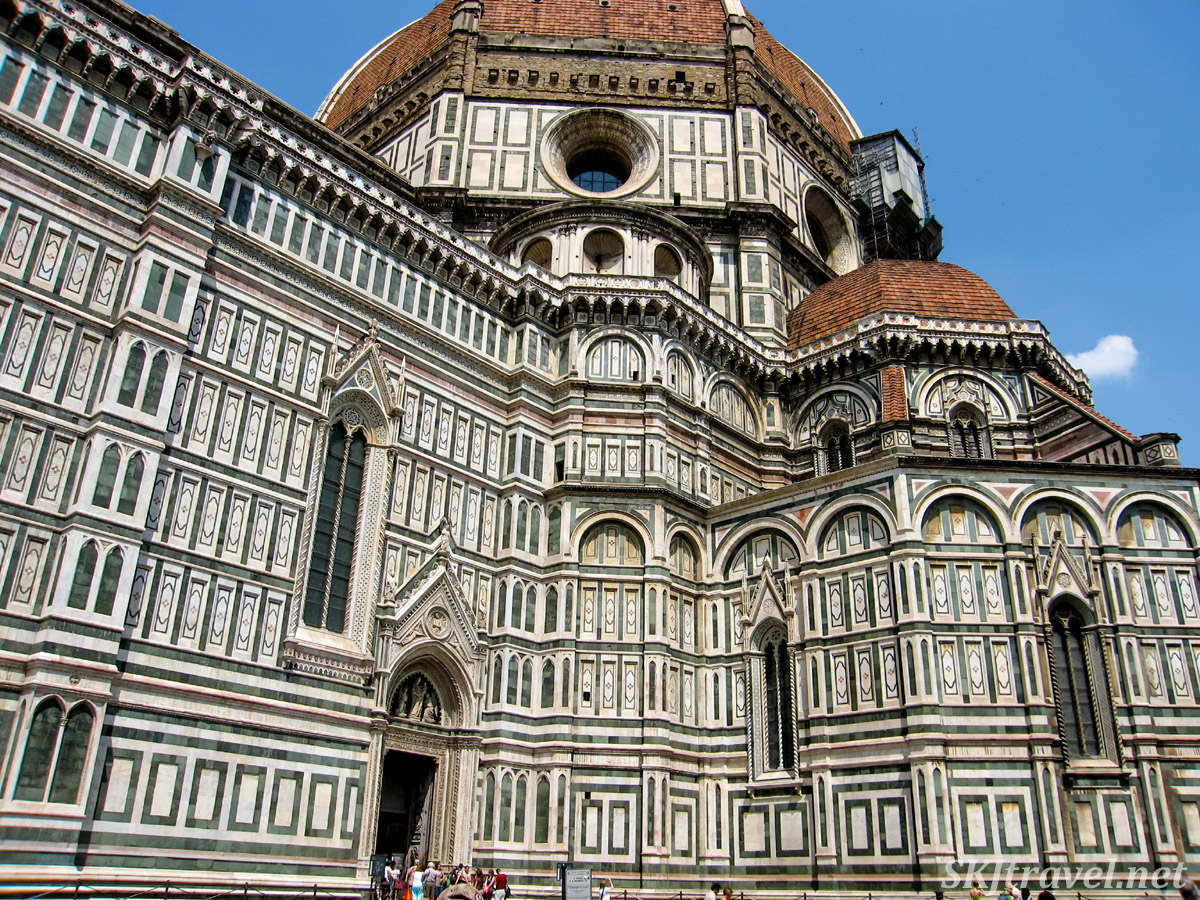 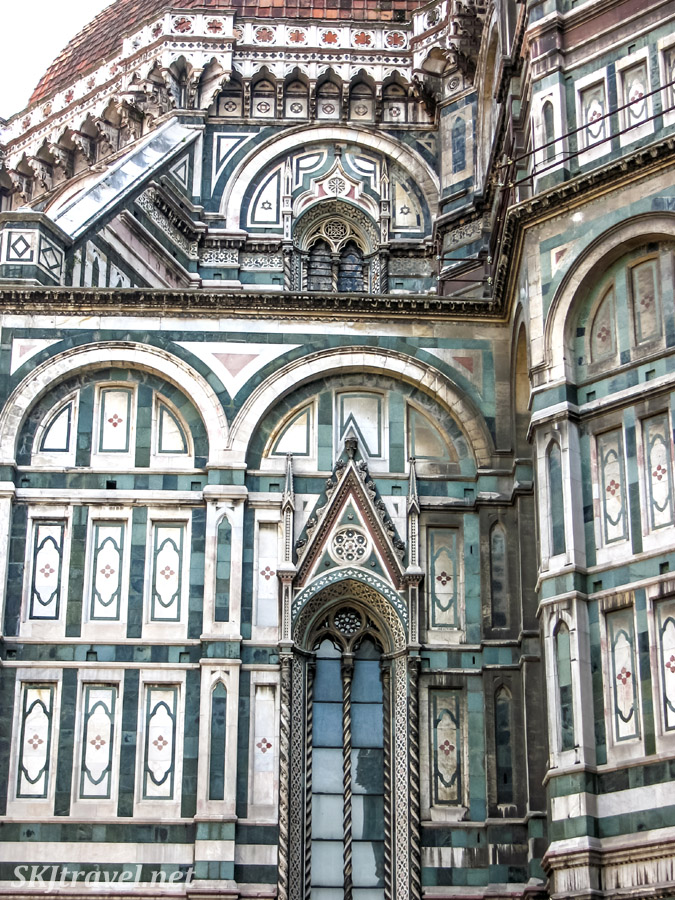 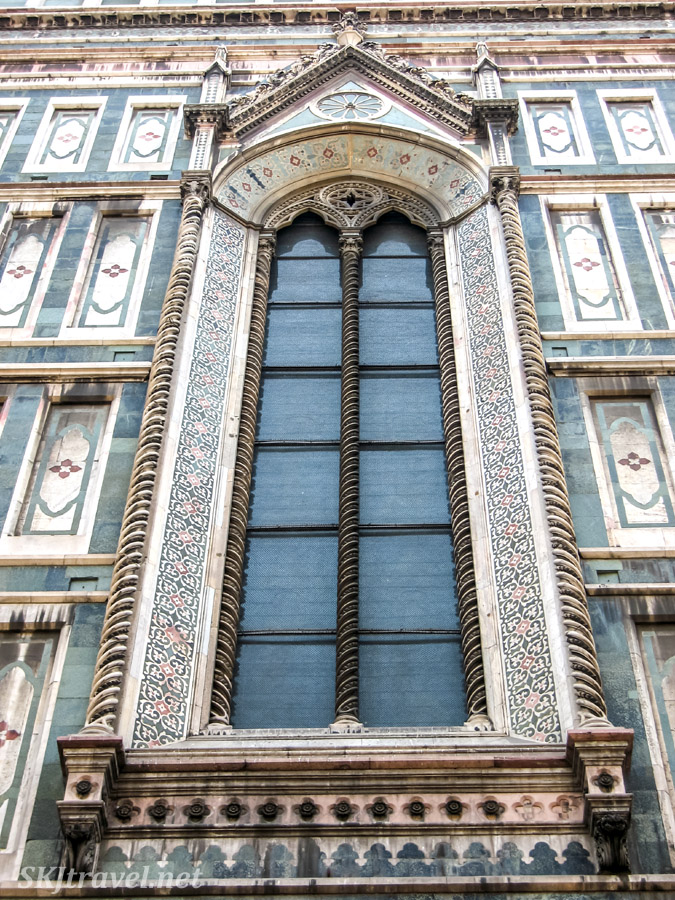 The interior of the dome remained unfinished for over a century until Grand Duke Cosimo I de’ Medici commissioned Giorgio Vasari in 1572 to paint frescoes on it, and so the vast dome, with six concentric layers, became the canvas for a depiction of The Last Judgment. Vasari paired with Vincenzo Borghini, who envisioned the iconographic subjects and added other themes taken from Dante‘s Divine Comedy. I mention a lot of the artist names in posts on Italy because in their circles in history they're very famous and will be recognizable to a lot of people. Not to all of us.

Vasari died in 1574 and the painting was completed by Federico Zuccaro 1579. The explanation of the fresco I'm copying in from other sources: "High up in the fresco in the dome, around the cupola, hovers a temple with the twenty-four elders of the Apocalypse; beneath this, on terraced registers, follow choirs of angels with the instruments of the Passion, then groups of saints, then personifications of the gifts of the Holy Spirit, of the virtues, and of the beatitudes, and finally the regions of hell with various deadly sins." I think if I was a painter of the hell portion, I might have nightmares about what my own imagination was capable of coming up with! 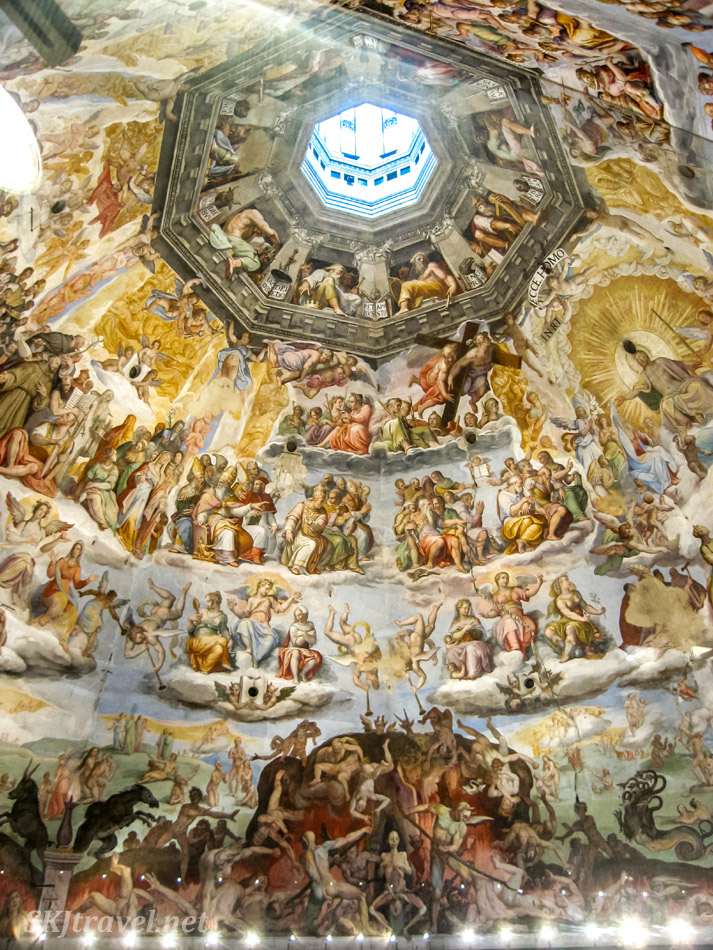 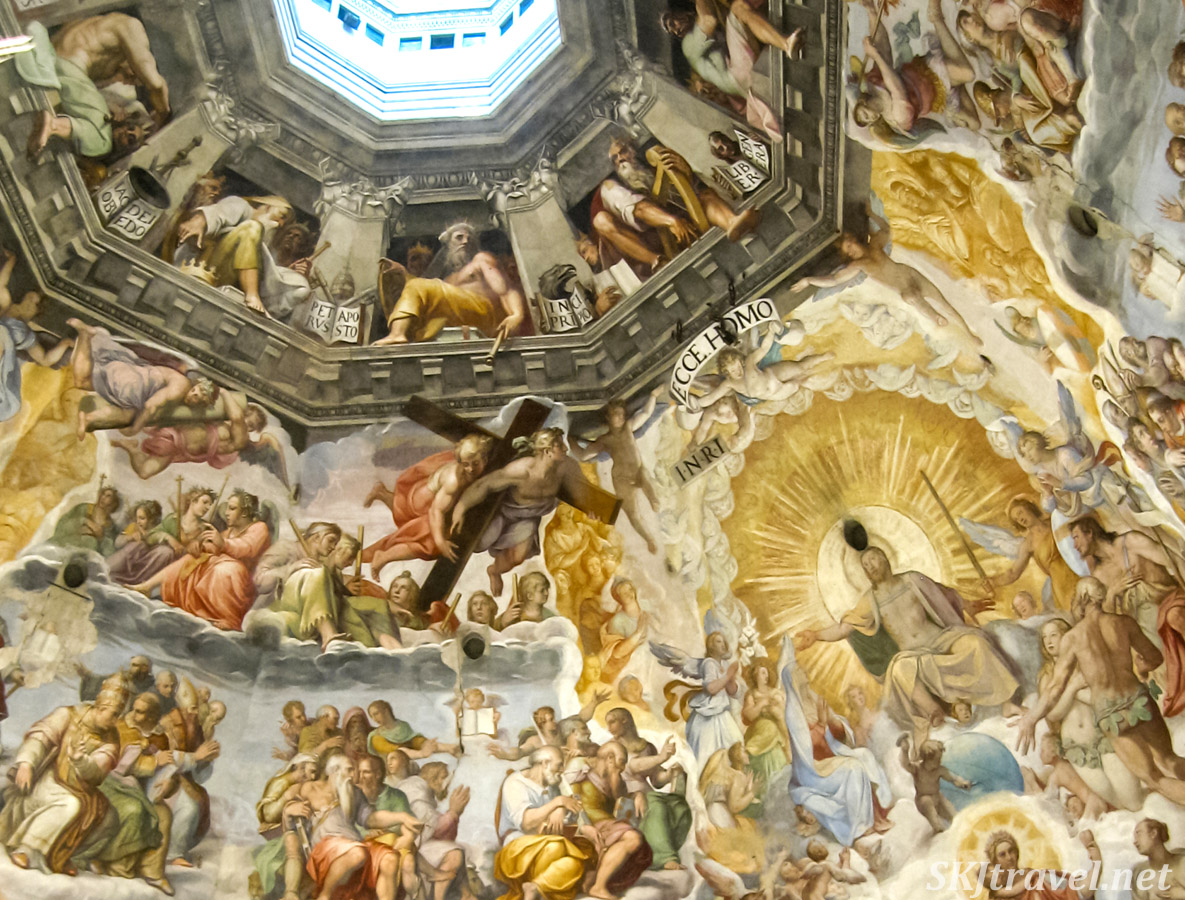 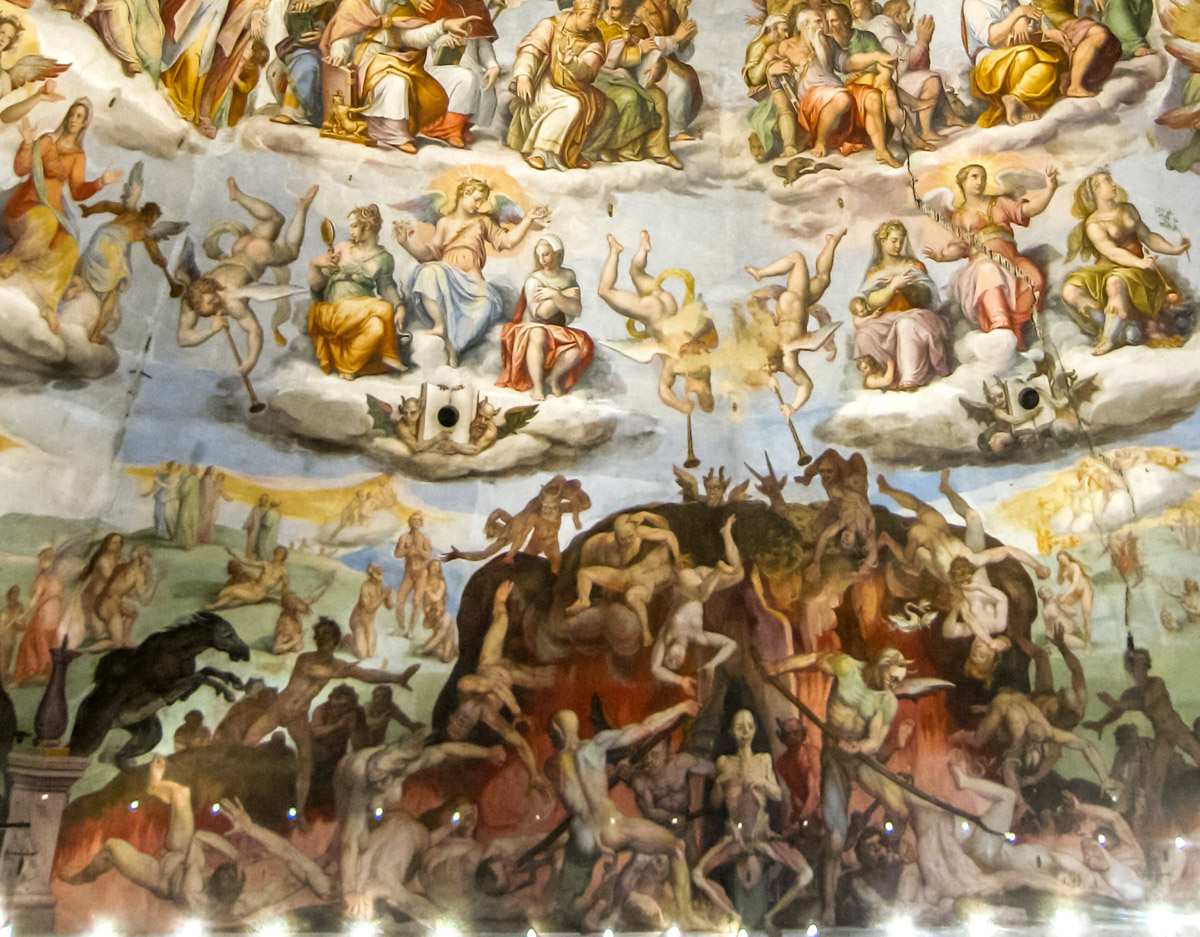 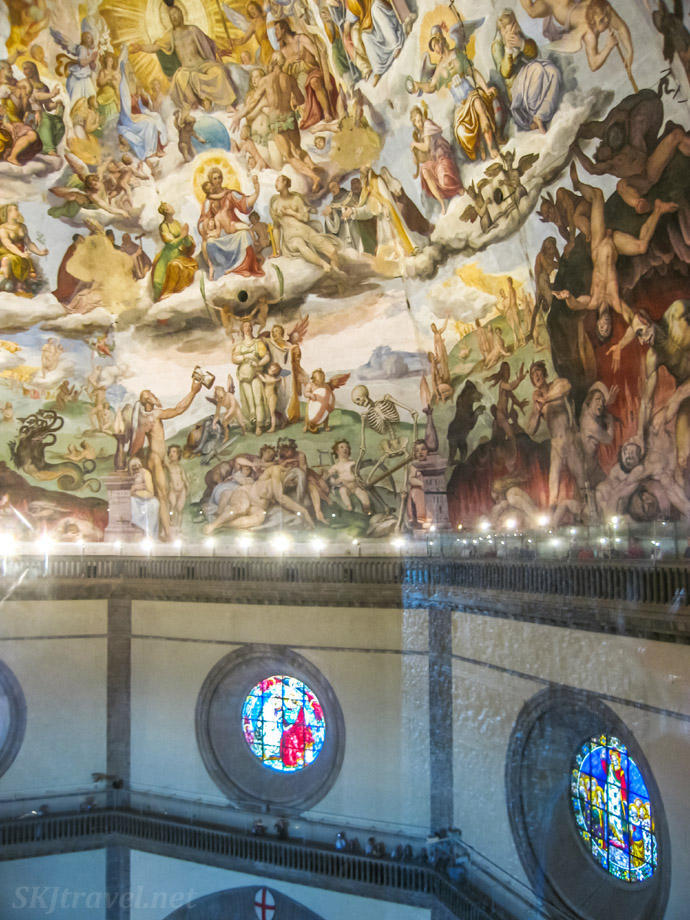 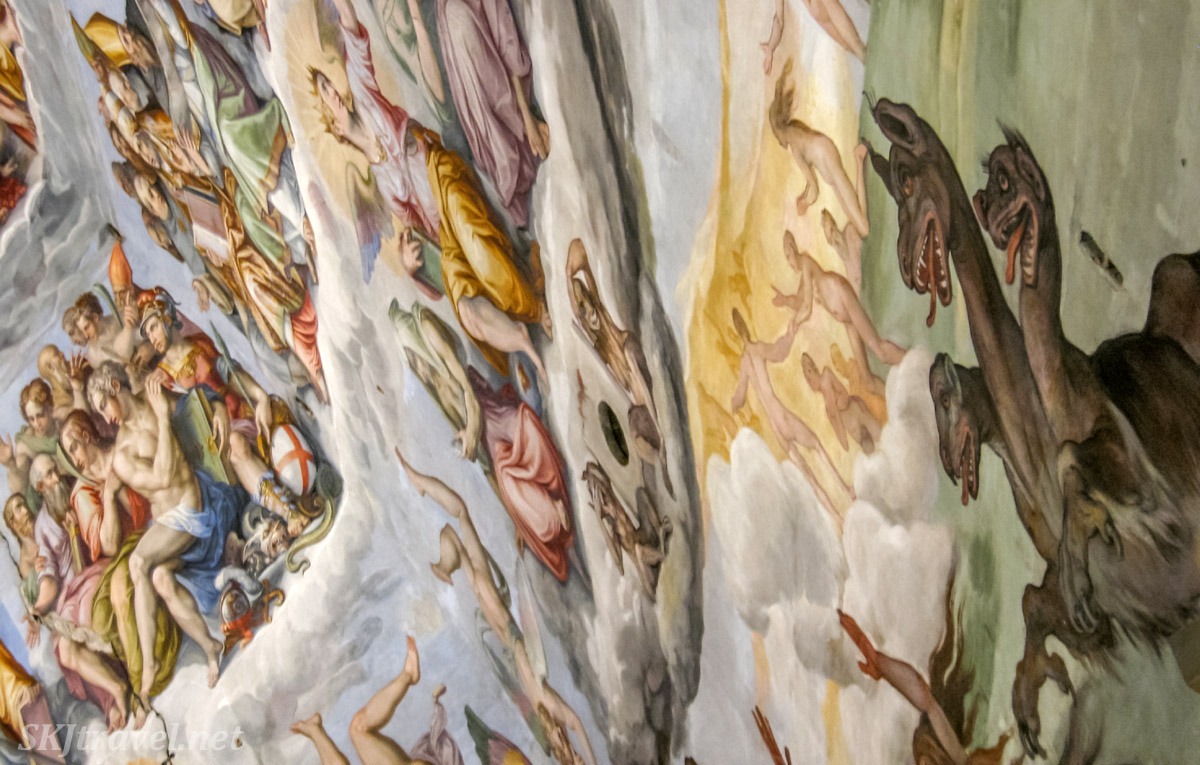 Across from the Duomo, in case you haven't been dazzled quite enough, is the Baptistery of St. John. The oldest Christian religious site in Florence, it was consecrated as a baptistery in 1128, though it was built on top of a much older Roman temple. Up until the end of the 19th century, all catholics in Florence were baptized here.

There is a lot to be said about the sets of huge bronze doors with golden panels that stand on three of the four cardinal sides of the baptistery. A contest was held for the design of one set, and several of Italy's most famous artists were involved. The panels that were judged the best were given the direction of honor ... the eastern side that faces the Duomo. At the time we were there, some of the original doors were still in situ and have since been moved to the Opera del Duomo Museum for restoration. Today much of what you see on the outside of the baptistery are copies, including the statues above the doors, while the originals are protected indoors. In the photos, the panels that are all perfectly shiny gold are replicas and the ones with only flecks of gold remaining are originals. 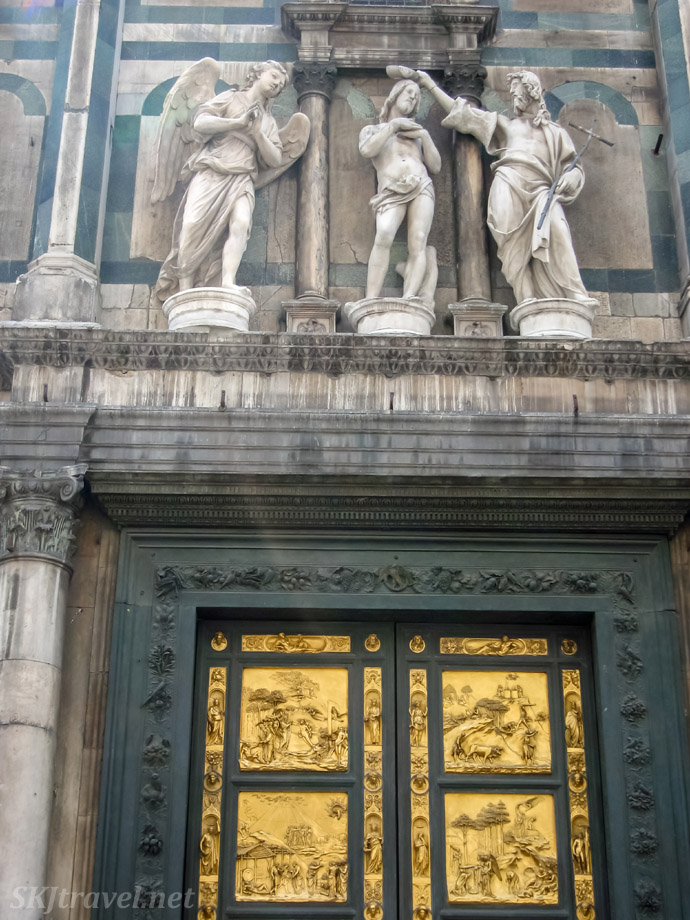 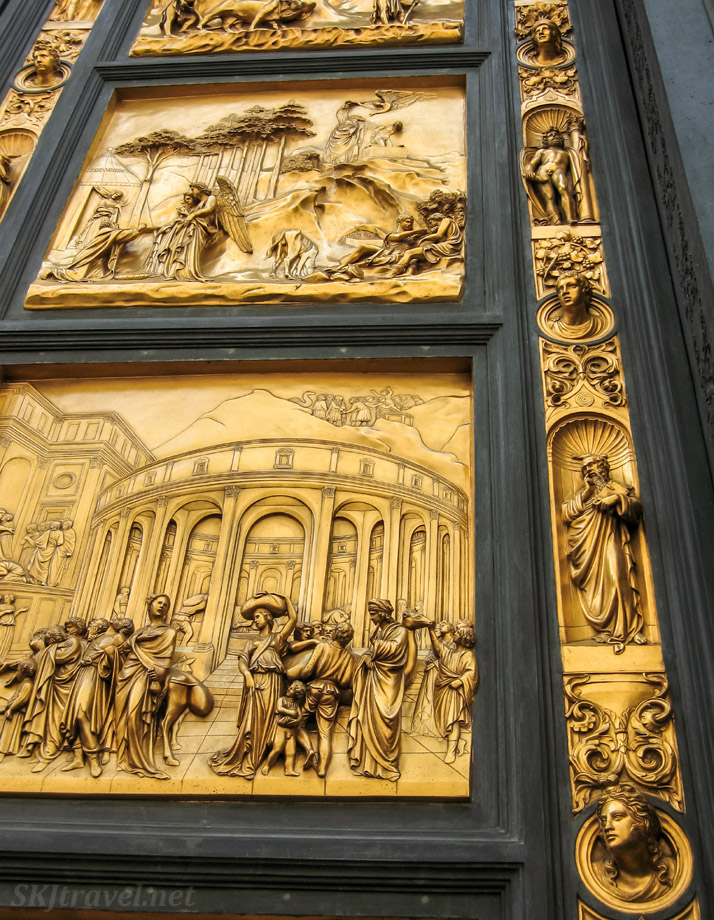 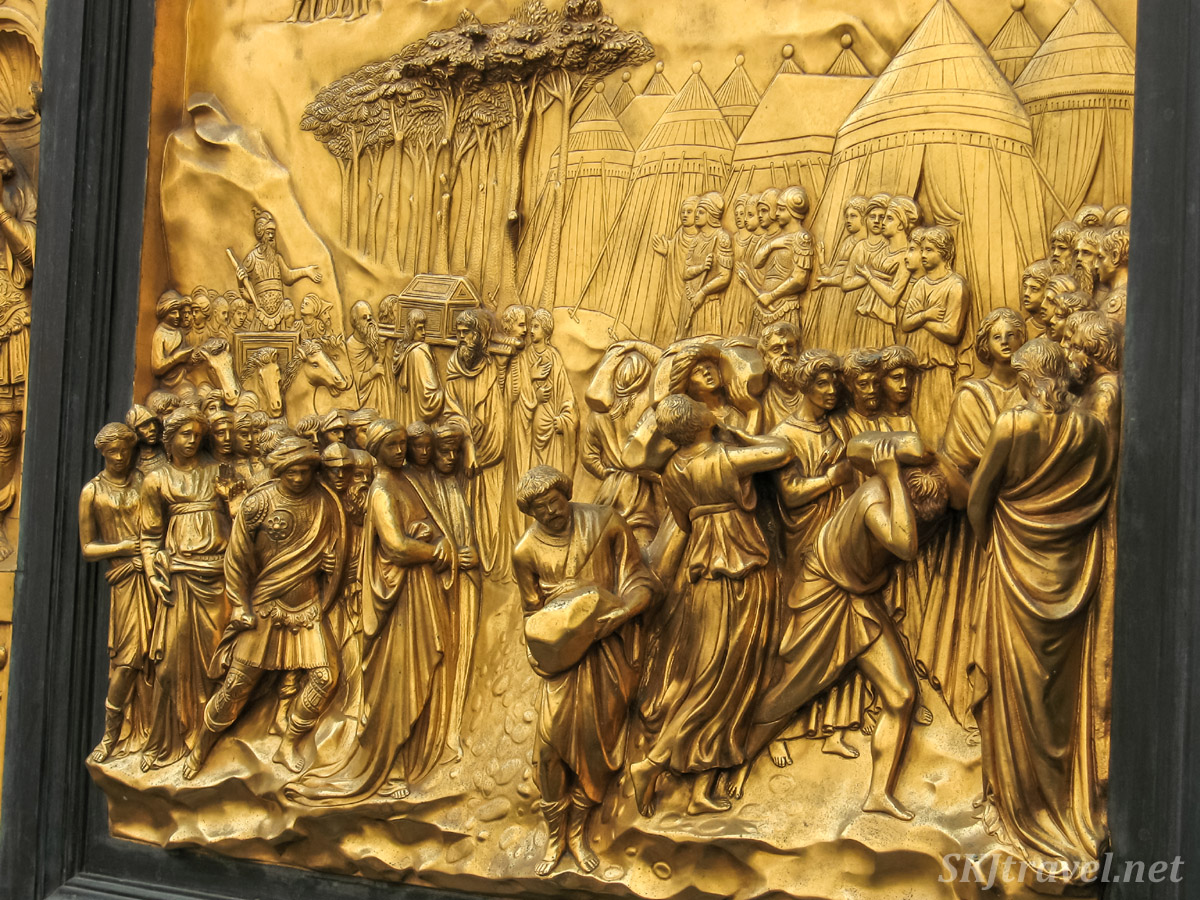 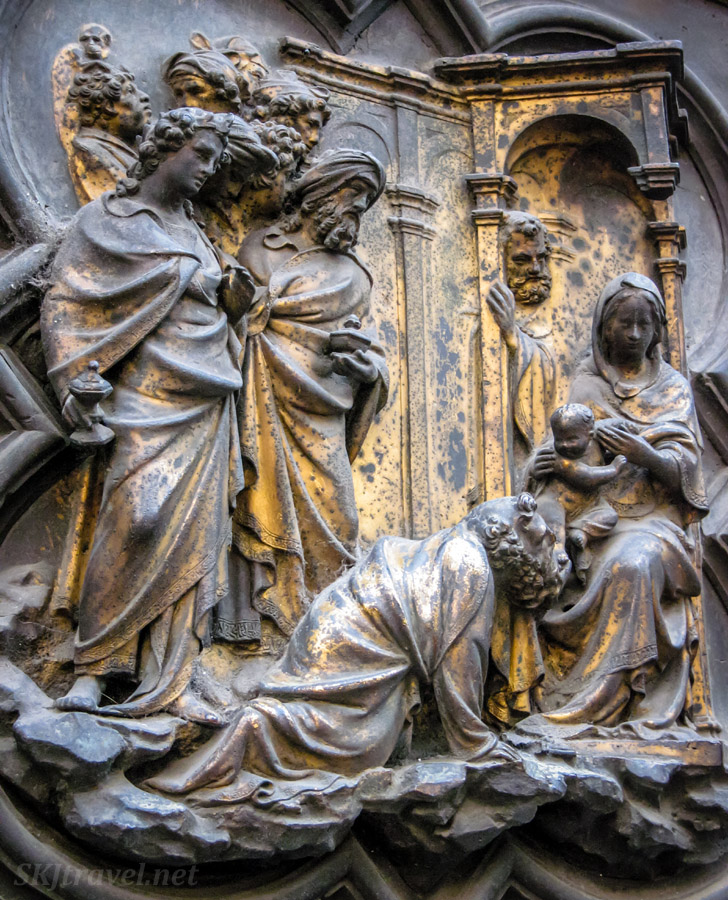 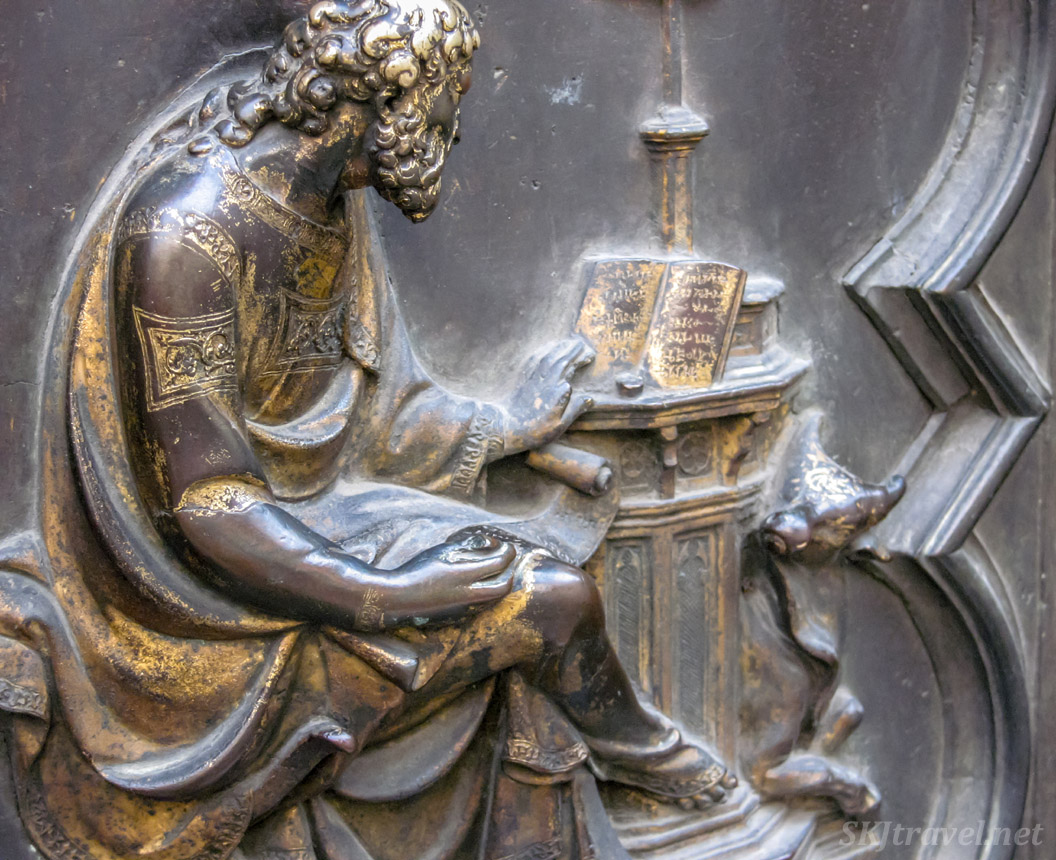 Impressively, the interior dome is covered not in paintings but in mosaics set on a gold background. The scenes were generally based on designs by prominent Florentine painters. This mosaic process was a very labor-intensive endeavor begun about 1228 and taking 100 years to complete. Unlike the Duomo's ceiling which took the narrative poem of a medieval author for some of its inspiration, the scenes in the baptistery are a bit more spiritual and ethereal with Biblical origin and inspiration, depicting in large part stories from various books of the Bible, including St. John the Baptist. You can see the panels are divided into levels, like in the Duomo, each level representing scenes from a specific book or theme from early Christian art . 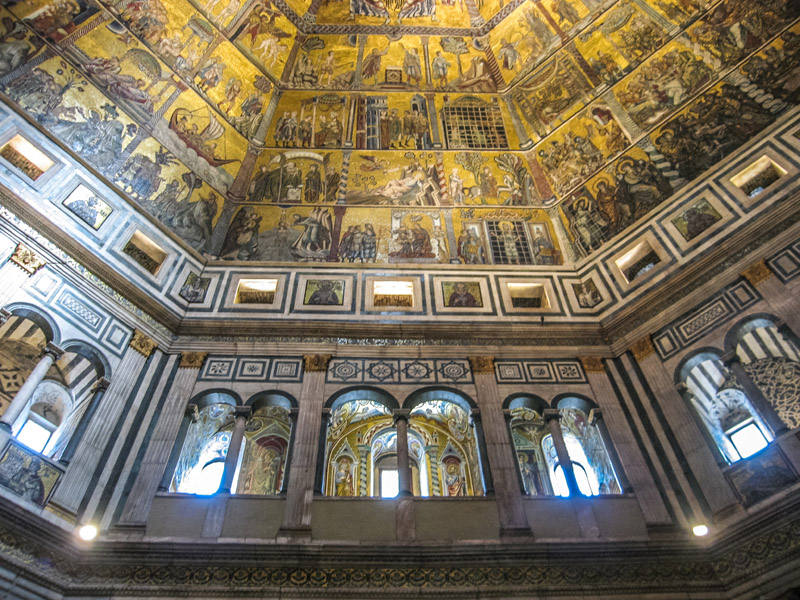 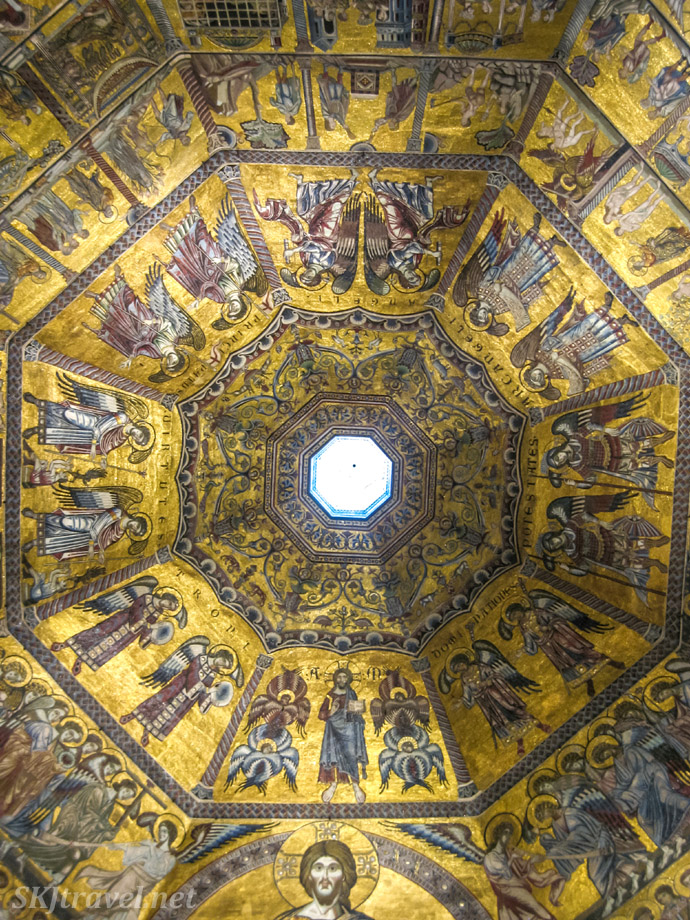 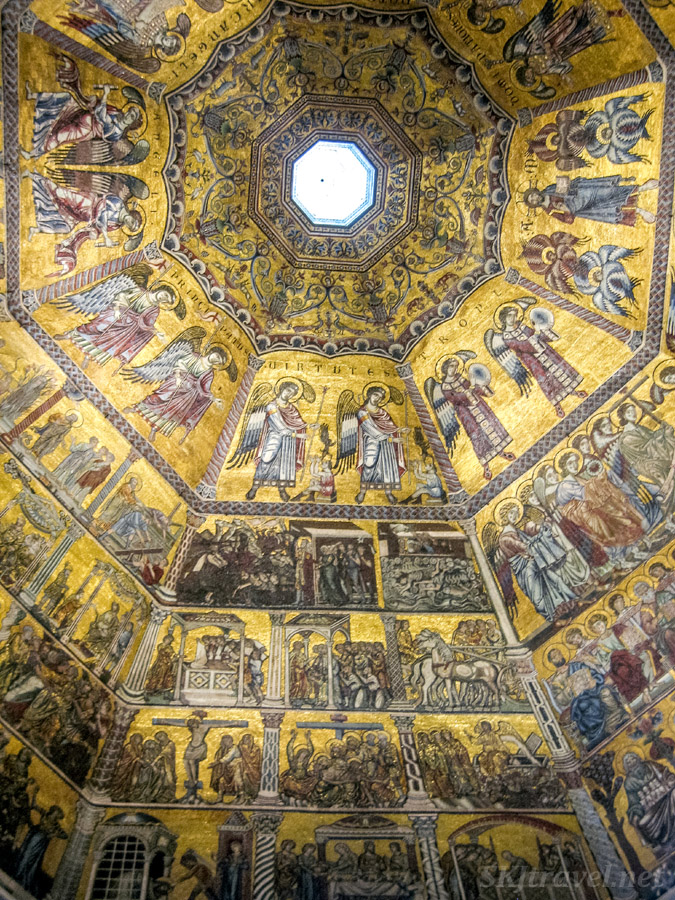 This is the tomb of Baladassare Cossa - Antipope John XXIII - created by Donatello and Michelozzo between 1422 and 1428. It cracks me up that there is a title, "Antipope," but in the labyrinth of politics and intrigue in the Catholic Church, there are about 40 men throughout history who have garnered this title by challenging the legitimately elected pope for the position of Bishop of Rome and leader of the Catholic Church. Clearly this one was looked upon rather fondly and his lavish tomb was commissioned by Cosimo de Medici. 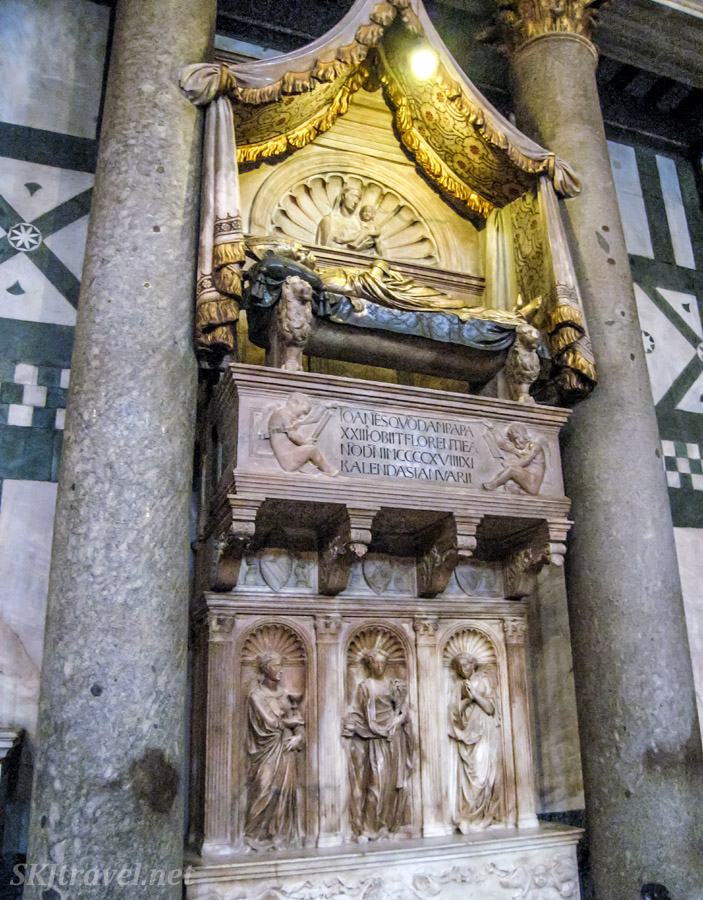 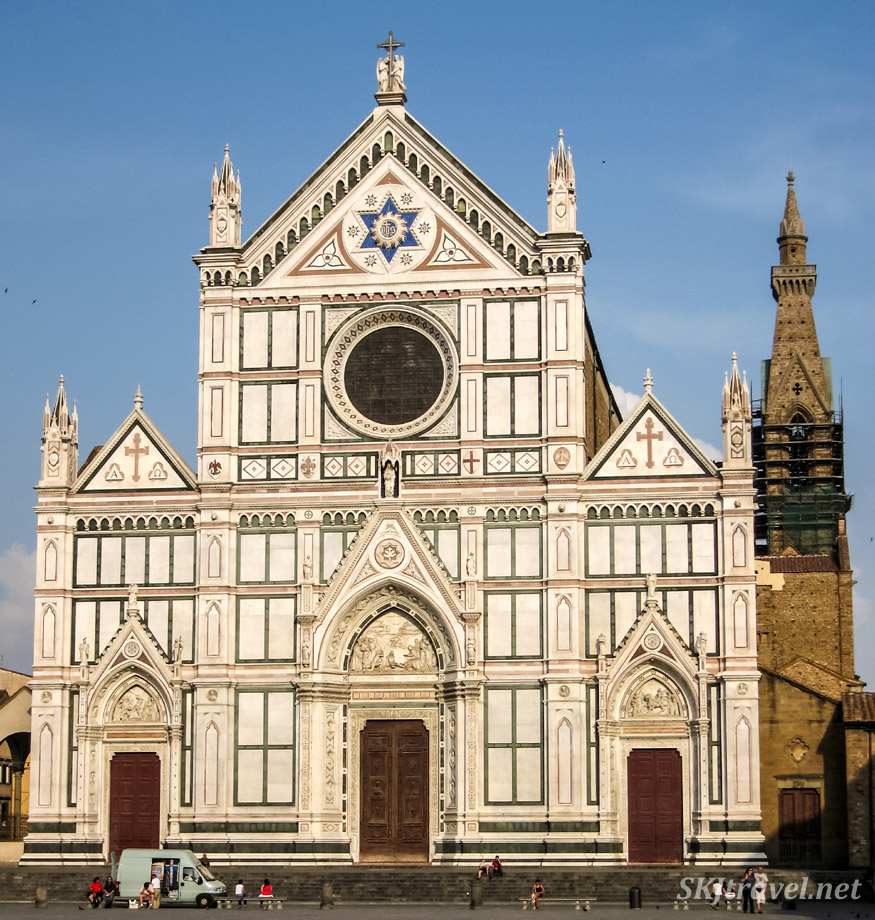 Another day we spent hours inside the renowned Uffizi Museum. No photos allowed inside, but here is a statue on the outside. Many famous works of art grace the galleries in the Uffizi. Even someone who's not particularly an "art-lover" would surely find a sweep through the museum worthwhile. Tickets are timed-entry tickets. 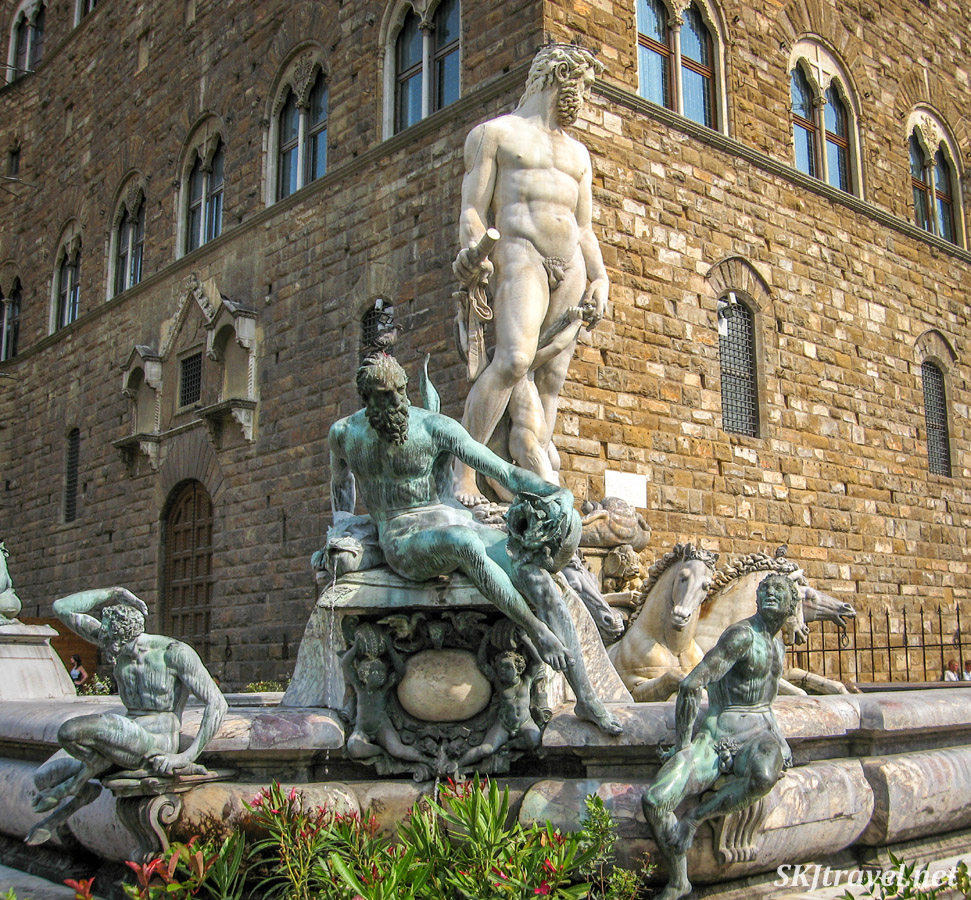