Monstrous Meal in Marrakech and a Sudden End to our Trip

The Morocco Archive explains why I was in Morocco. This is the story of how we left at the mercy of the spreading Coronavirus.

So our last day in the medina, after we had lunch, we had a brief conversation with the waiter about locally available liquors and he made a comment along the lines of, "Since you're stuck in Morocco, you might as well drink!" We didn't know what that meant, but it nagged at the back of my mind, and as soon as we reached our riad in the early evening, we checked into the internet to find out what might be going on. We had already read a couple nights earlier about the USA closing it borders to flights from Europe except citizens would be allowed in, so we had not reached "alarm" stage. (Both of our flights home had layovers in Europe.) By good luck, I checked my email just as a message came in from the artist residency director. She is actually Australian, and she told me she just received a message from the Australian embassy that Morocco was closing all borders to everybody the next day. We had 24 hours to get out or possibly be stranded indefinitely.

Well *this* was alarming. I suddenly knew what it felt like to be a peasant in a medieval walled city and hear the calls, "Raise the drawbridge! Close the gates! Prepare for a siege!" Our plan to head to our usual happy-hour spot in the riad's courtyard and enjoy a beer evaporated and was replaced by a panic rising from the stomach as we were overwhelmed with not knowing what to do. I ordered the beer anyway and Erik brought it to the room where we both sat on the bed each with our own laptop frantically trying to figure out what to do. Our tickets had been booked through Travelocity. Everything I read about how to go through them said you would be on hold for many hours. I dialed them up anyway with my Google phone number and sat on hold while we continued to research. But even if we got through in a few hours, the prospect of changing both of our flights, which were booked independently because we had different return dates, to the next day seemed highly improbable, plus we were on different airlines, and Erik had multiple airlines within his own journey back. It seemed too much, especially to get done before tomorrow and it was already about 6:00 p.m.

Finally we decided we just had to ditch our roundtrip tickets and look for new one-way tickets. At first glance, tickets that were costing $800 or $900 before we left home were pricing out at $5,000 up to $9,000 per ticket ... price gouging people in a panic. My heart sank, there was no way we could afford that. We also wanted a direct flight to USA because the situation was changing at light speed and we feared we could then get trapped in Europe on a layover.

So as we're both searching every travel site we can get to on the web, on one I'd never even used before I found a flight direct to New York for $1,500. That's a lot more than we paid for our RT tickets to get there, but at least basically affordable. Frankly, it seemed miraculous that precisely the flight we needed had seats for the next day at a not-insurmountable price. I snagged them but then got a message saying the seats would be confirmed after the company confirmed our payment with our credit union. Ack! I wondered how long that could take. We waited on pins and needles for the confirmation to go through, hoping the seats didn't disappear in the meantime. While waiting, Erik decided to browse the internet looking for places to eat and came across a place fairly near to our riad that was pretty highly reviewed but outrageously expensive. It was, however, a flat fee for a multiple course meal and all the wine you could drink. (!! -- not too common in a place like Morocco). Fortunately we could order dinner from our riad if necessary and were figuring we'd need to just stay in waiting for our confirmation. But huzzah! we got confirmation about 9:00 pm and were overcome with relief. Sadness, too, at having to ditch the trip, but right at that moment relief was the primary emotion.

I figured Erik was pretty sore at me because he didn't think it was wise to travel and had hoped I would cancel the trip. But I had told him if he didn't want to go to Morocco, then I'd still go anyway by myself just for the residency portion -- this was my birthday trip, one of those milestone birthdays nonetheless, and I wanted to be abroad! But rather than not allowing me to go, he simply wouldn't allow me to go by myself. I agreed that I would change my tickets to fly back with him if the world started to fall apart and abandon the residency. We, even he, had no idea it would do so within a few days of our arrival.

So, having secured our tickets, we decided to make the most of our last night and splurge. So we put on our shoes and set off, even though it was quite late. It's a very out-of-the-way place. We followed Google Maps to get there. The door where a man is standing as a doorman isn't the real door; once he has discerned you are there for dinner (pretty much any foreigner standing there would be) he leads you down an alleyway to another door. We felt like we were part of a secret club, haha. So first we were led to the rooftop terrace for a look over the city. There were tables but we weren't invited to sit, maybe it was too late at night. 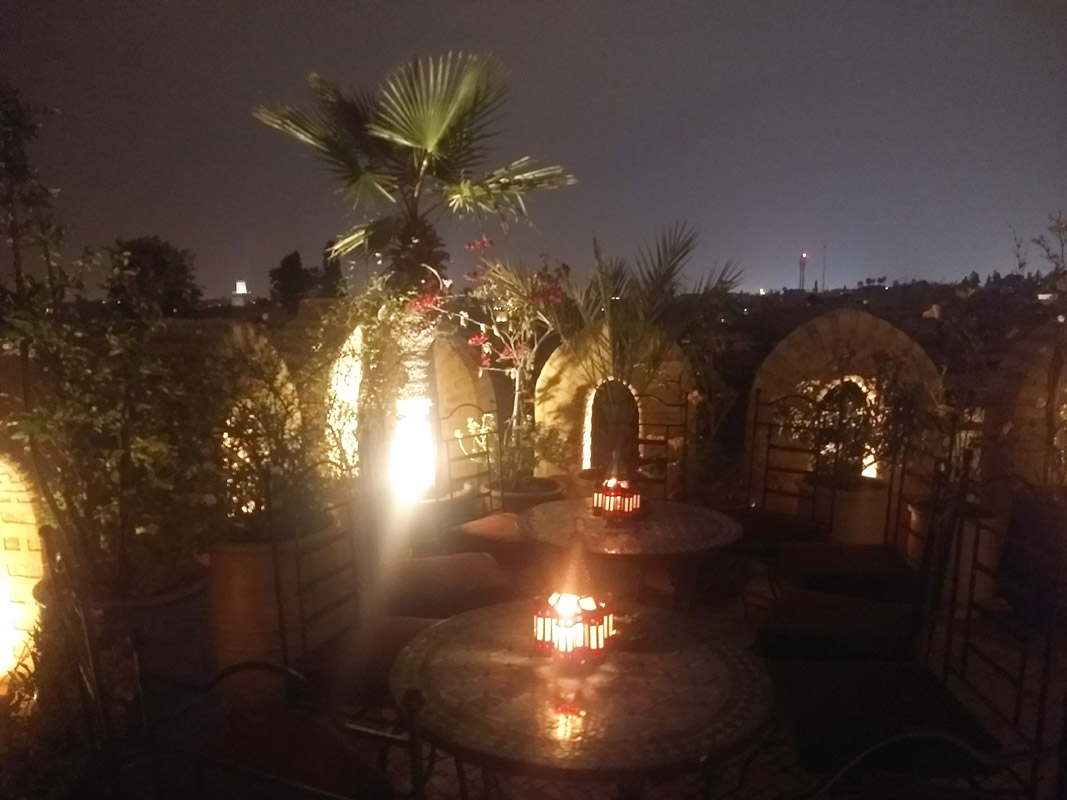 Then inside to this room for nuts and cocktails, listening to a couple musicians playing a sintir and castanets, the same instruments the two waiters at our restaurant in Essaouira spontaneously played. It's tradition that they wear hats with long tassels on top and occasionally swivel their heads around in circles to the music so the tassels go flying around their heads. It's amusing. No pics. 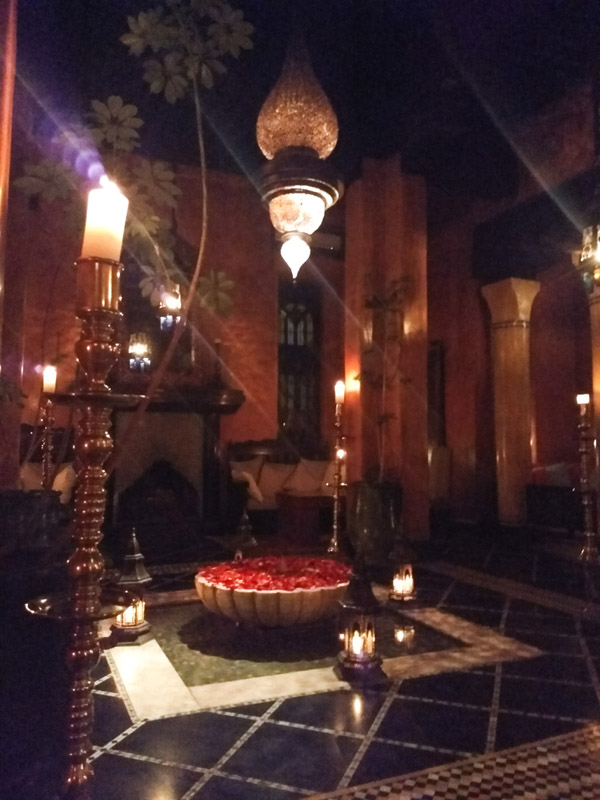 Then walk by this pool to our dinner table in the dining room. 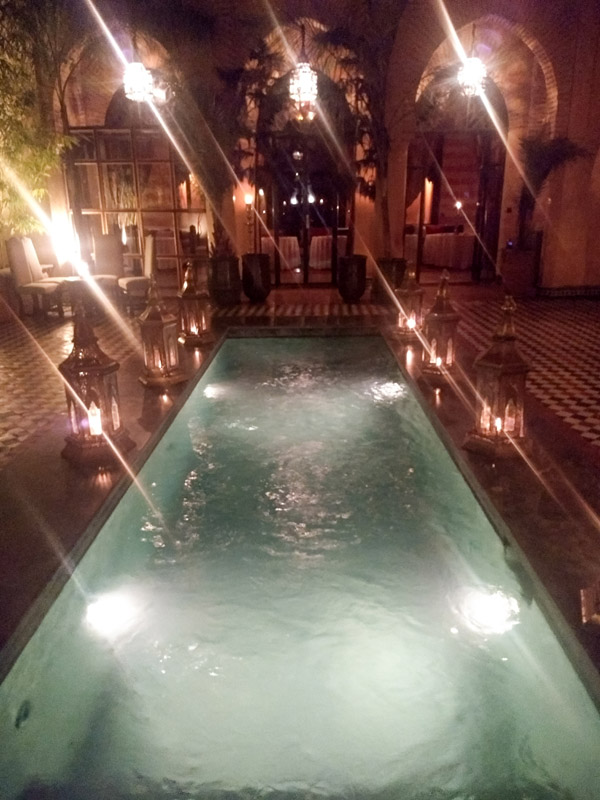 We had a nice little private nook in a back corner of the room. And unlimited wine ... yessss! Exactly what we needed for stress decompression and we took full advantage of it. Only downside was it made it slightly more challenging after we got back to our room to pack, haha. Fortunately Erik is a champion Throw Everything In At Once Packer. So I mostly just sat on the bed and watched him pack up the room. Remember the Bugs Bunny cartoon (best one ever), "Rabbit of Seville," where Bugs is making a fruit salad on top of Elmer's head, just tossing fruit over his shoulder ... I was thinking of that. 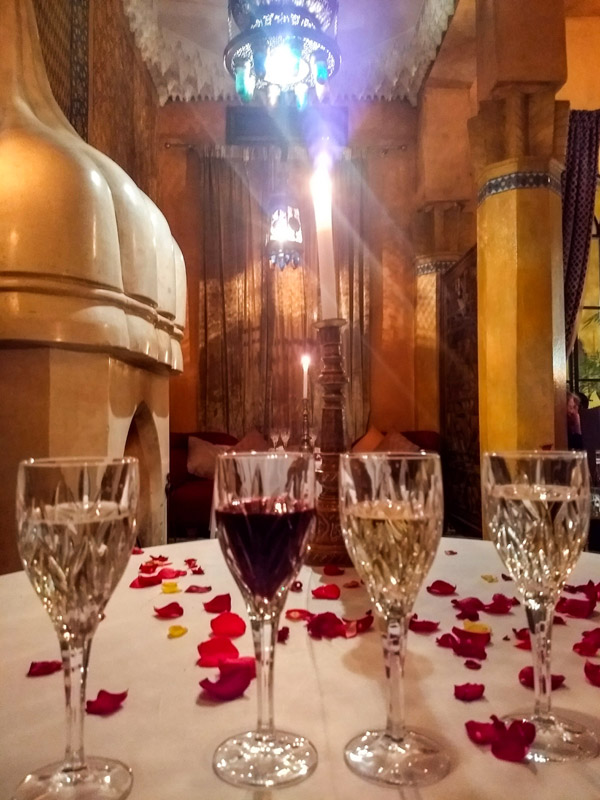 So this ... this was the appetizer course (below). I'll be honest with you, I felt guilty about it, about how almost all of this food was probably going to go to waste. It looked to me that they served the same plates to every table no matter whether there were six people or two people at it. I'd feel bad even in America, but in a poorer country ... ack. But I of course wasn't going to get up and leave, it was already on the table. So I just pushed that feeling down and we had a lot of fun trying all the plates. Erik tried every single one, even the one with eggplant! (one of the exceedingly few foods he's averse to) And guess what I tried -- sheep liver! It was about as unpleasant as I was bracing myself for and fortunately there were other yummy dishes I could eat as a chaser. 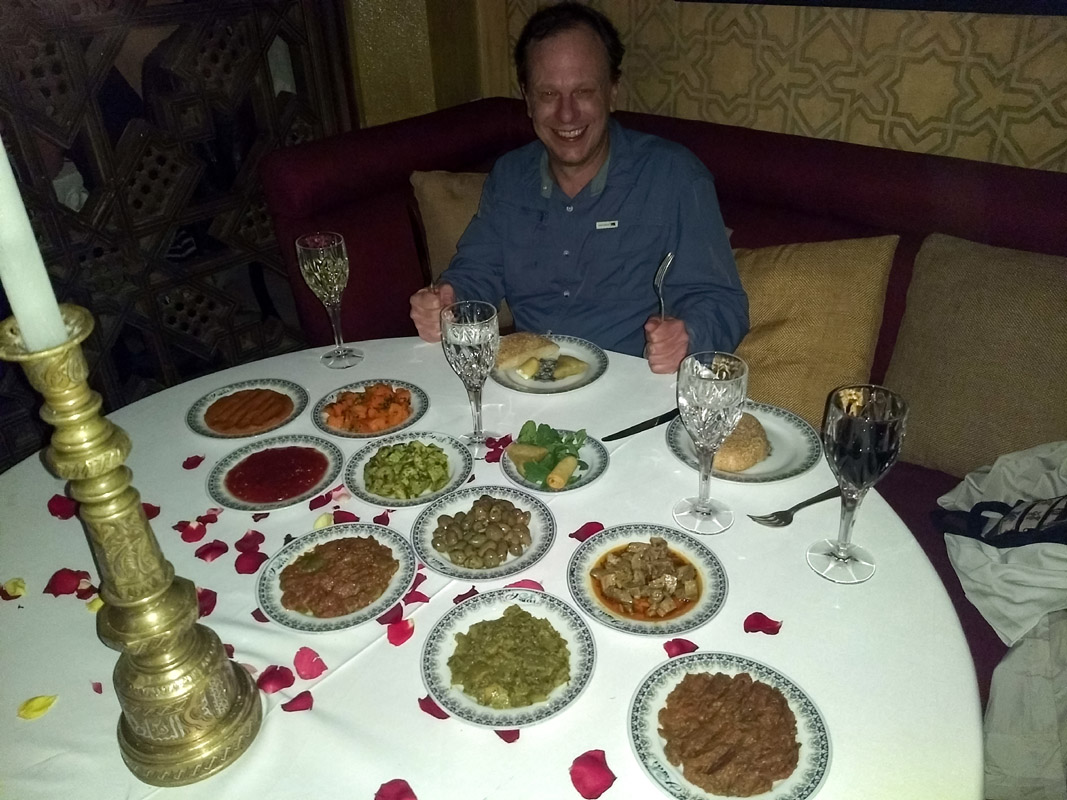 After this ridiculousness, came the main course. That is to say, two main courses. First a chicken and then a lamb. Well no, not *a* lamb, but a big chunk of one. The chicken had some white things lying on top of it that looked like strips of white onion. Erik took one and ate it. He made such a face, I couldn't even discern exactly what it was about. I kept asking, "What is it? What is it?" He didn't speak, just kept up that face. Finally I decided it was something he couldn't bring himself to swallow. "Spit it out! Spit it out!" I told him. This was absolutely unprecedented for him to be so immobilized by something in his mouth. "Spit it out!"

At last, with the item swallowed, he was able to speak. "That is NOT an onion." There was another slice on the chicken and so he broke off a teensy tiny bit and told me to try it. I did and my face instantly puckered up. I don't know what it was, but it was like an extreme form of citrus. So he'd eaten at least ten times more of it than I had ... I understood now the face!

And then came the dessert tower -- four levels of goodies -- and a giant plate with what was similar to a crispy sopapilla with a delicious sweet sauce on top. Quite divine. 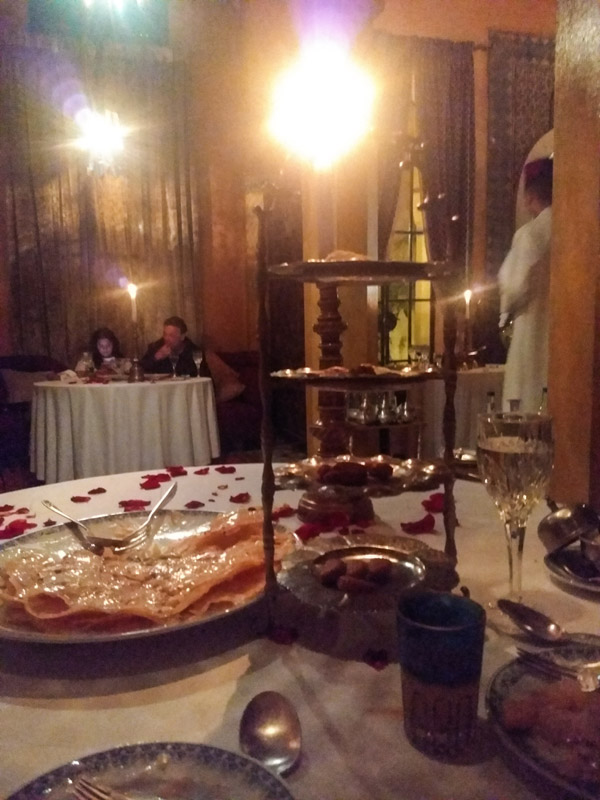 Oh my, we were barely able to roll out of there. I doubt we will ever spend that much money on a meal again in our lives. But under the circumstances, our last night of a severely aborted trip, we decided we deserved it, and it really did take the edge off the stress we'd gone through earlier in the evening. So we flew back home on the 16th and later learned that on the 16th all restaurants were shut down in Marrakech, and so we got in literally at the very last moment for our momentous meal. Many Europeans were stranded and are still stranded as I write this several weeks later.

Our flight went to New York City, and we had to spend the night there and book another flight the next day to Denver. All the airports were spooky, so empty, restaurants closed. Maybe 20 people on our flight to Denver. Shortly after that NYC shut down and things really got awful, so we feel fortunate to have gotten out in the nick of time.

I'm bitterly disappointed at missing my residency, aborting the sightseeing I was greatly looking forward to with Erik, and being home on my birthday. But it's a trifling matter when an awful lot of other people have or are going to have way, way worse problems as result of the COVID-19 virus, whether it be health related or job related or any number of other very unfortunate effects and upshots of this pandemic. I feel lucky; I feel blessed; I'm grateful for not being stuck abroad in an unpredictable and rapidly changing situation.

It's hard to know how the travel industry will recover from this or how long it will be before international travel is appropriate. I've seen enough of the world, I have absolutely nothing to complain about if I am homebound for awhile, even for a long while. Thank you, dear readers, for your armchair companionship on my travels as I share my memories and experiences with you. Take best care, everyone!