OK, so that's not a very clever title, but an expedient one: you already know what you will find here! I thought it was a very picturesque place and a workout for the wide angle lens. Because I had a problem culling the pics -- there were too many I wanted to share -- I didn't want to combine a post about it with any other sights.

The Palace was listed in guidebooks as one of the top sights to see in Marrakech. The proprietor at our guesthouse also circled it as an important stop on the city map. I figured we would enjoy it, but first I had two other priorities, the Saadian Tombs and the Majorelle Garden. I almost came to specifically not want to see it on account of all the people annoyingly telling us, "The palace is that way!" as we walked past, hoping we'd stop to ask more about it so they could attach themselves as our guide. It also annoyed us that everyone presumed we were wanting to see the palace. So when we ran across it, just by accident of covering so much ground, we decided to check it out, though it didn't look like much of anything exciting from the street. Admission wasn't too expensive so we paid it to see what all the fuss was about.

Well, I'd say the fuss is well-deserved. I consider it very serendipitous that we came across it, because I don't know if I would have taken the effort to find it and it ended up being a highlight for me. In our travels, we often come across things in a way that makes Erik say, "We were meant to see this," or "to find this," when we look for something without directions, just winging it. It's probably simply because we are wanderers by foot and by car, so odds are in our favor of running across cool stuff. The architecture and the detail in the wood, stucco, painting and tilework were as mesmerizing as at the Saadian tombs, but there was much more of it. Courtyard after courtyard and room after room. We certainly didn't see all of them but the entire palace complex has over 150 rooms.

There weren't many plaques inside the palace, we weren't given a brochure guide and the rooms are all empty, so we weren't given much context to decide what any given room was for. This is a rare time when a guided tour might have been enjoyed (not usually our style), because I can't find much information on the internet either about what the various rooms are called. I often do my research after I get home from a place to be able to label photos with more information than I documented at the time. So there's not much I can say about most of these except "a pretty room," "impressive ceiling," over and over.

Below, notice the level of detail in the door, the ceiling, the archway, the floor, the stained glass ... every inch of this palace is covered in exquisite detail. It took thousands of craftsmen to render this dazzling opulence, working for seven years. Materials were transported here from throughout Northern Africa and the finest Italian marble was imported from Carrara. 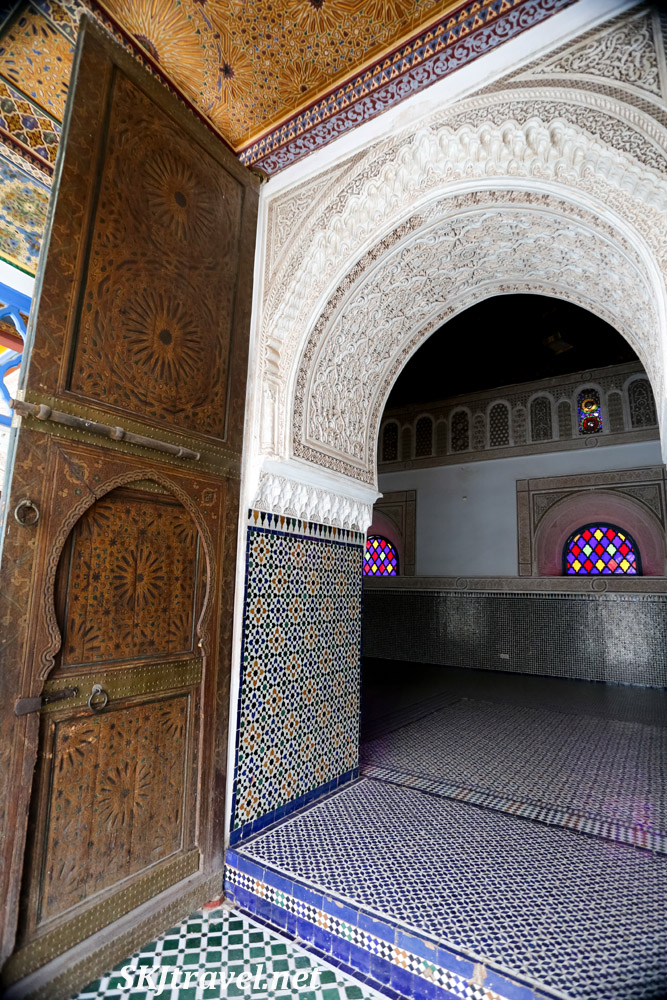 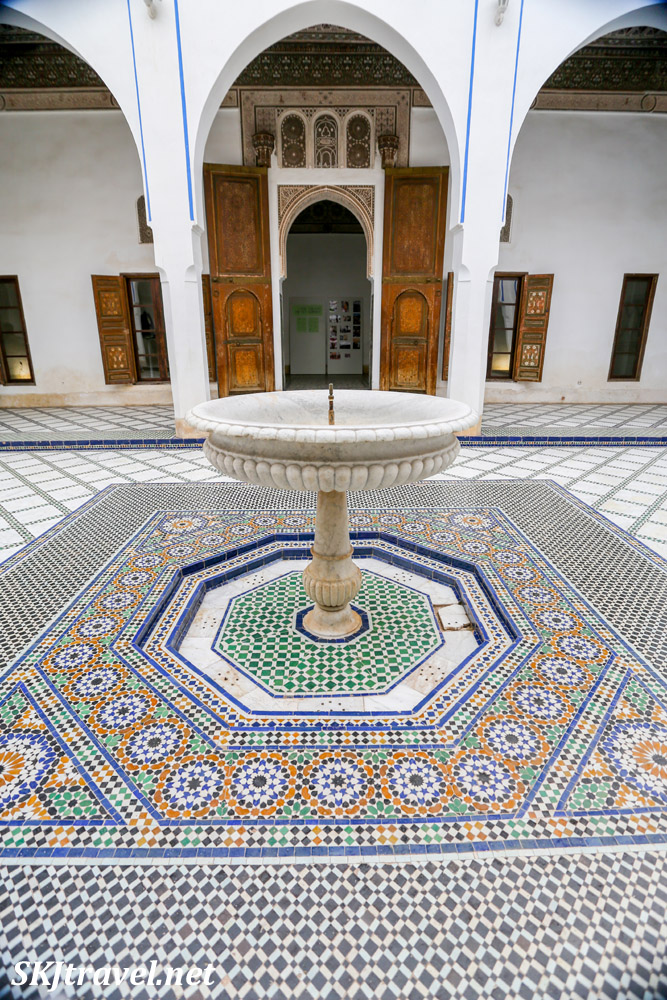 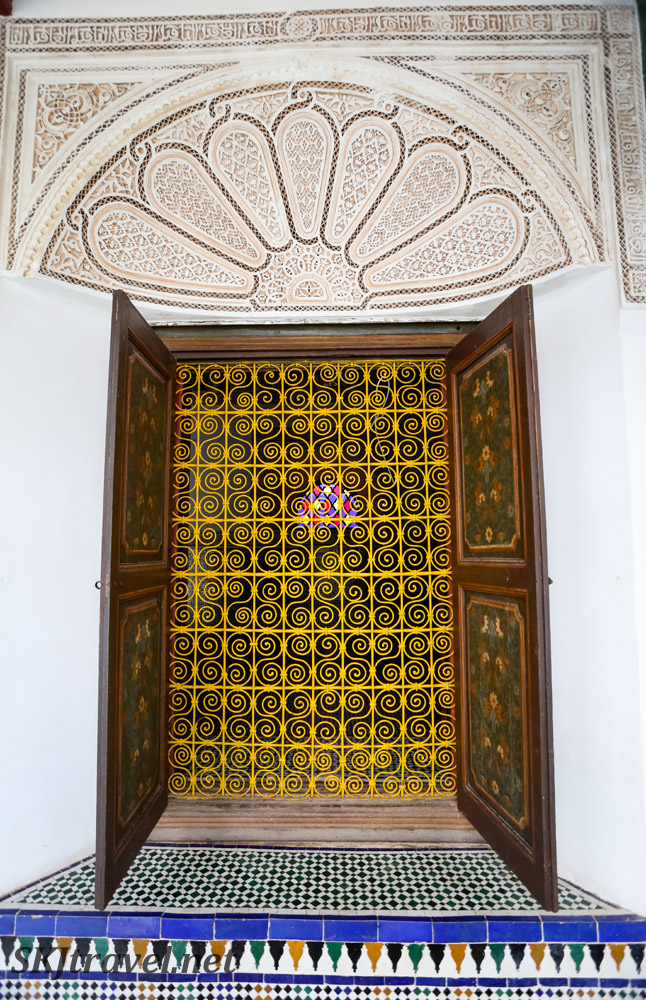 Perhaps the most interesting thing about the palace is that it was not built by a king (a sultan) nor by a wealthy merchant -- by far the two most common builders of ancient splendor. No, built in two phases in the second half of the 1800s, it seems like a fairy tale or a story extracted from 1001 Arabian Nights. Born as a slave and growing up with the heir to the throne, when said heir became sultan, he promoted his slave, Si Moussa, through the ranks to eventually become Grand Vizier. Once he reached this status, Si Moussa commissioned the Bahia palace for himself.

But the real depth of splendors were added when his son, Bou Ahmed, succeeded him as Grand Vizier to the next sultan and served as regent of Morocco while that sultan was still a child. Bou Ahmed added many rooms including ones to accommodate his four wives and harem of 24 concubines. Many of my friends who have been to southern Spain have commented that what they see in my photos reminds them of sights there. And indeed the renowned architect hired by Bou Ahmed had worked in Andalusia, and the Bahia Palace is considered an excellent example of Andalusian and Moorish architecture.

The Grand Vizier Bou Ahmed died in 1900 and his splendid palace was quickly looted, his treasures stolen. Morocco was then a French Protectorate and Bahia Palace was the centre of the new French administration. The most famous official of this era was General Hubert Lyautey, who played an important role in the cultural history of Marrakech. It was during his tenure that the Saadian tombs were rediscovered. Now the palace belongs to Morocco’s royal family and has received a UNESCO World Heritage designation. At the beginning of the 2000’s the palace was extensively restored.

Every surface from the floor to the ceiling is remarkable, but I found the ceilings to be the most notable. All the rooms and nooks had gorgeous cedarwood ceilings hemmed with excruciatingly detailed stucco work. Here's a sample of them. 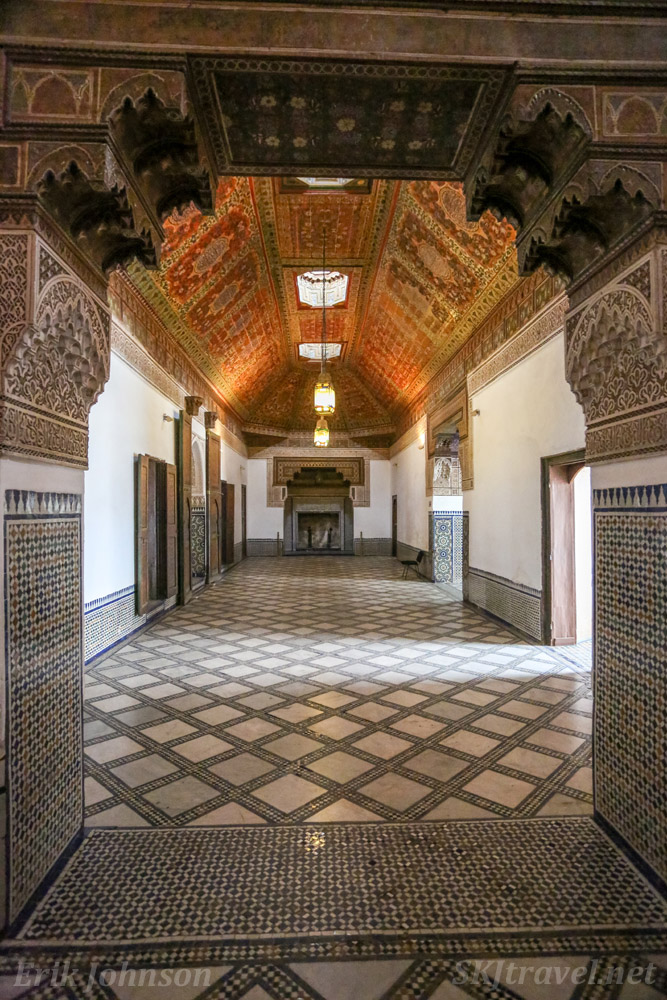 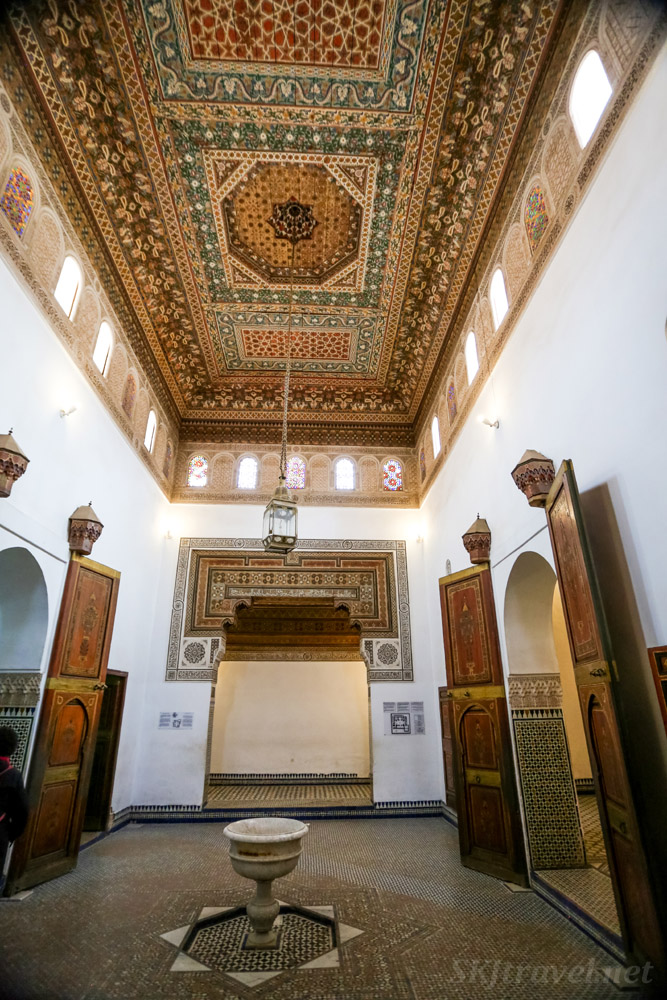 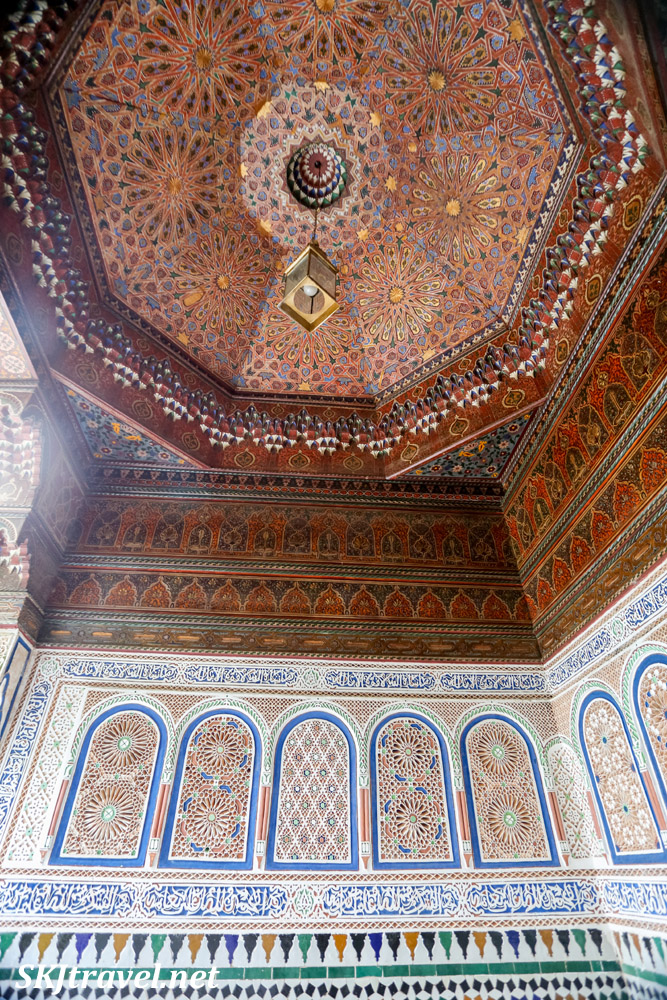 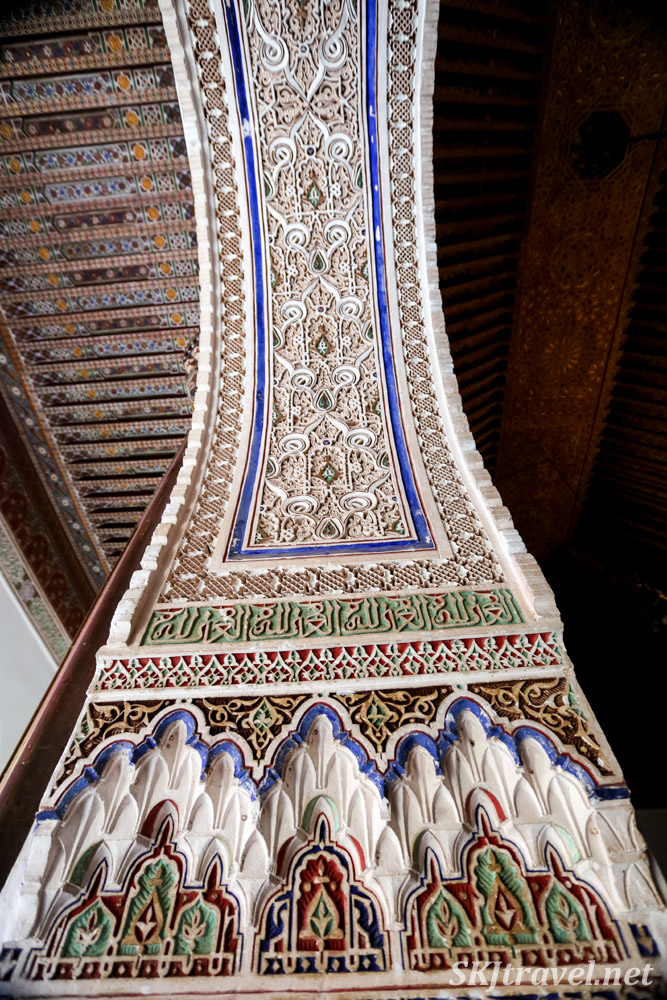 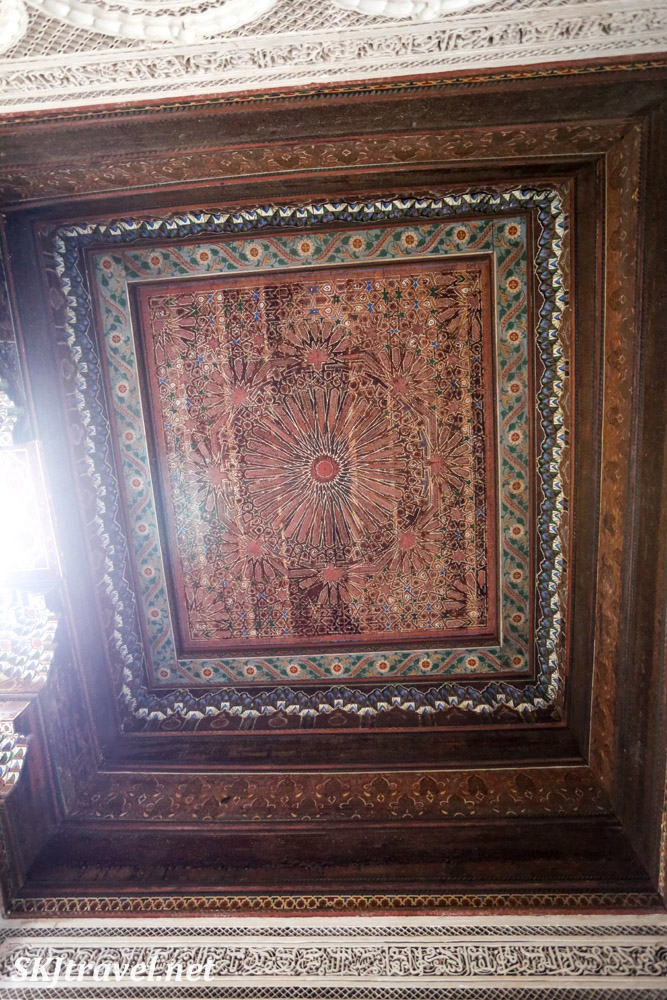 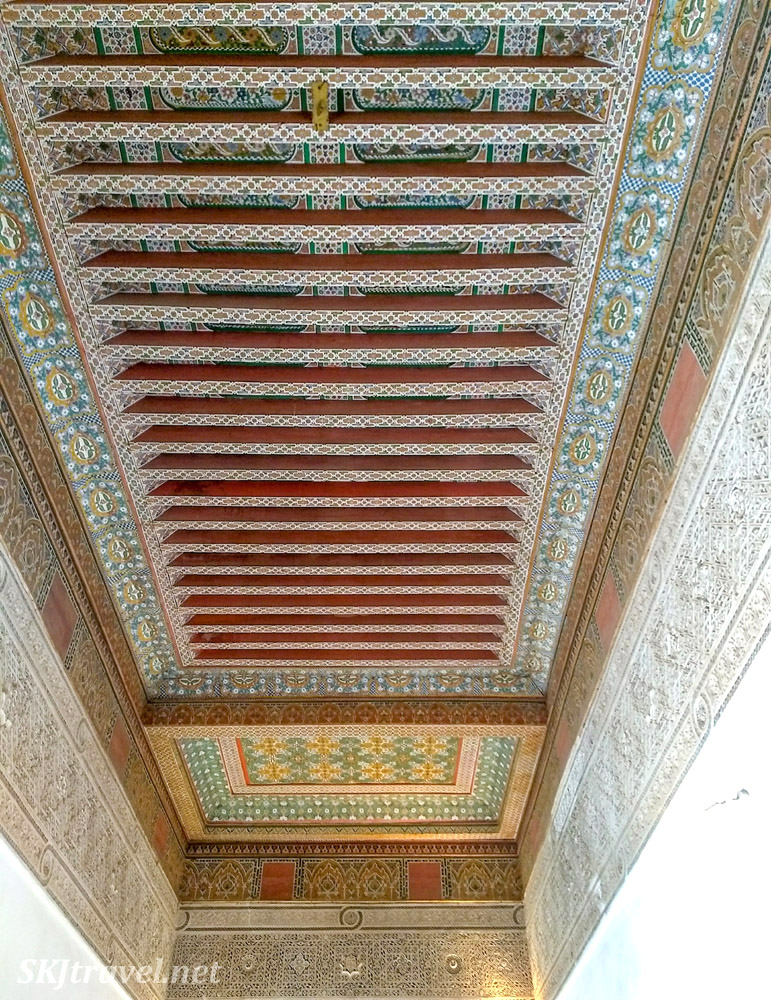 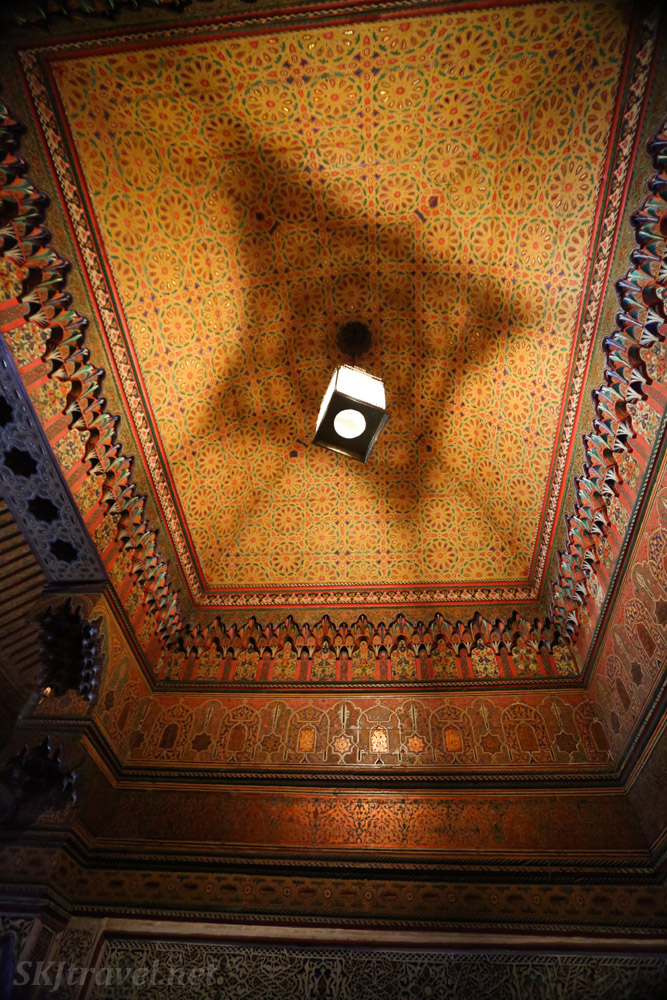 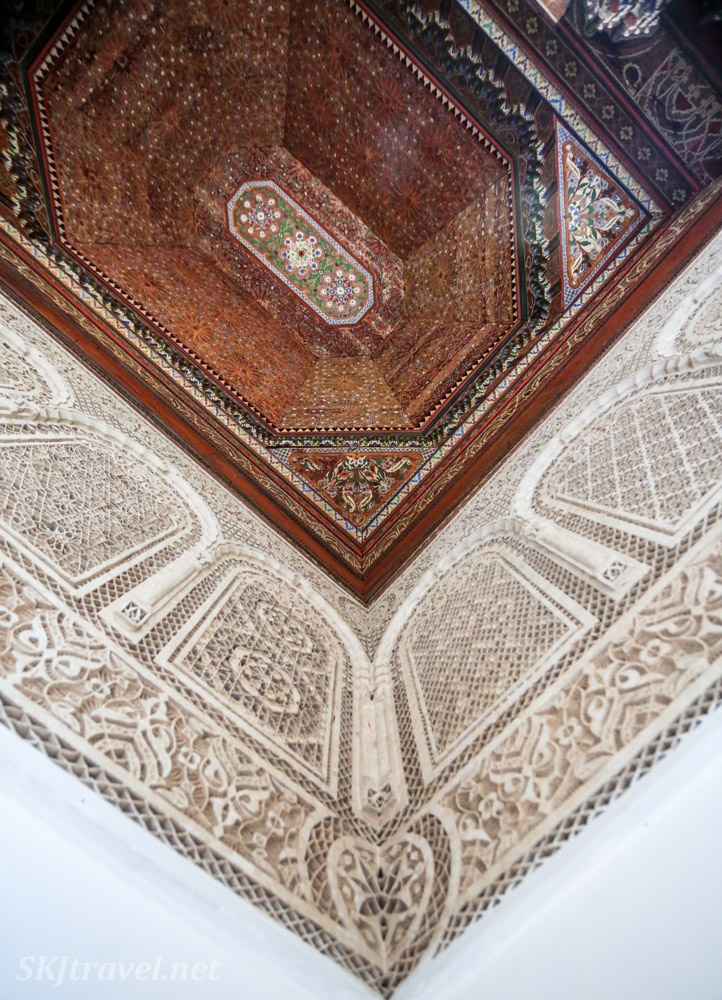 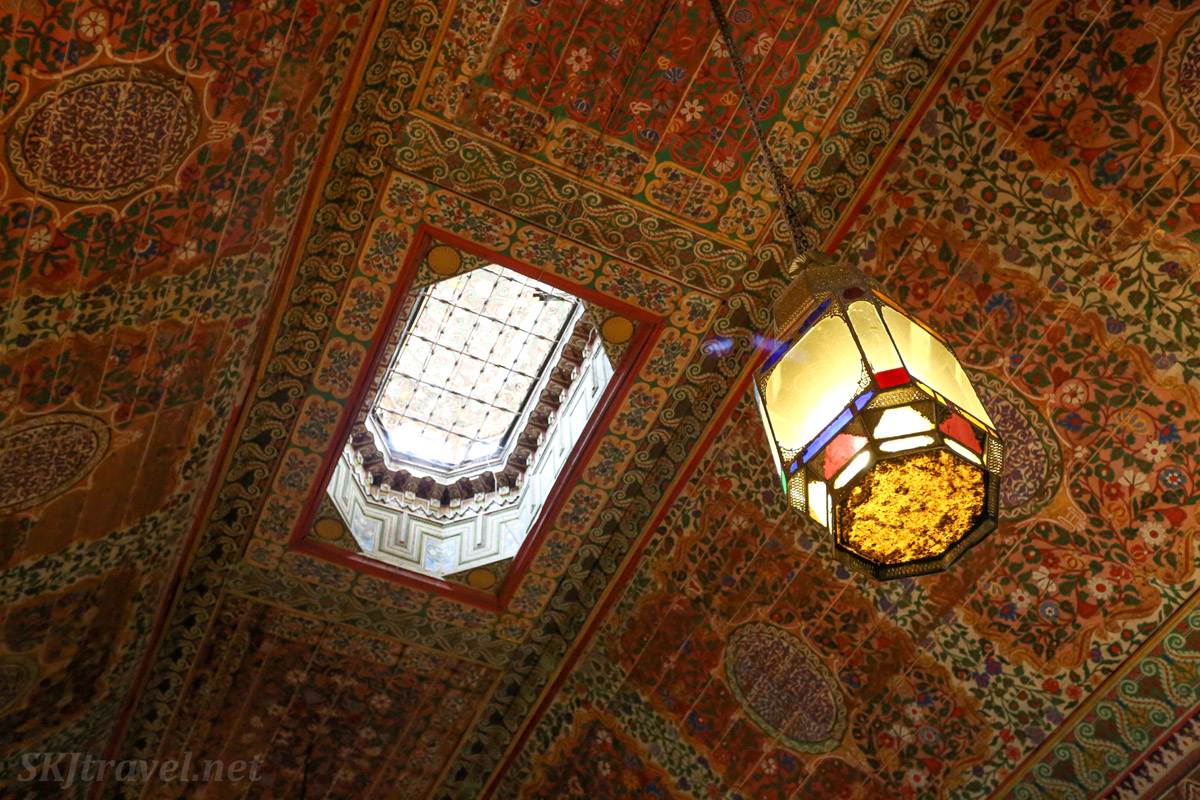 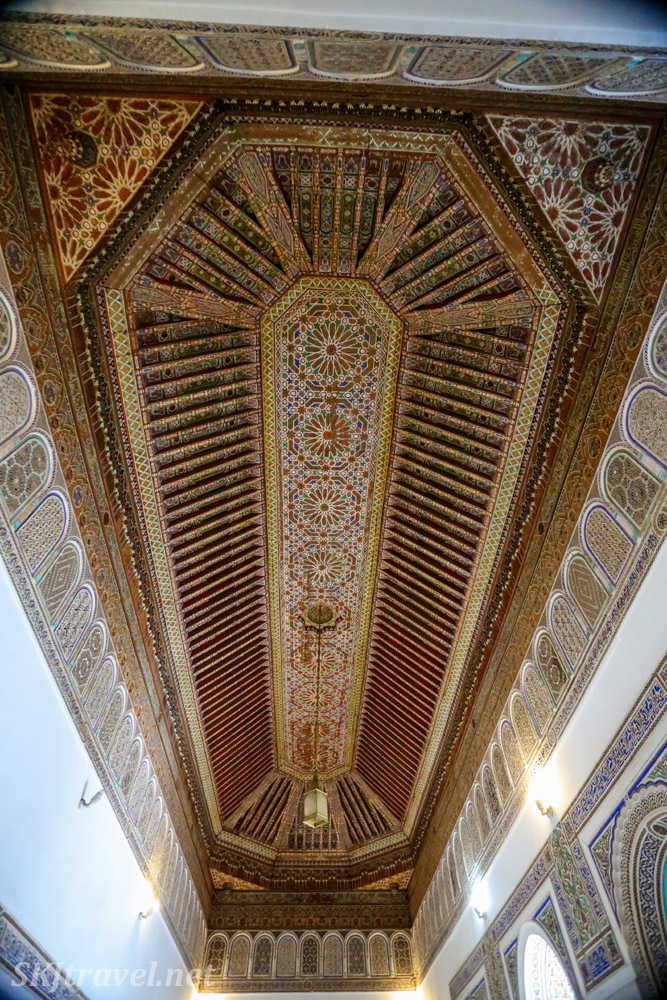 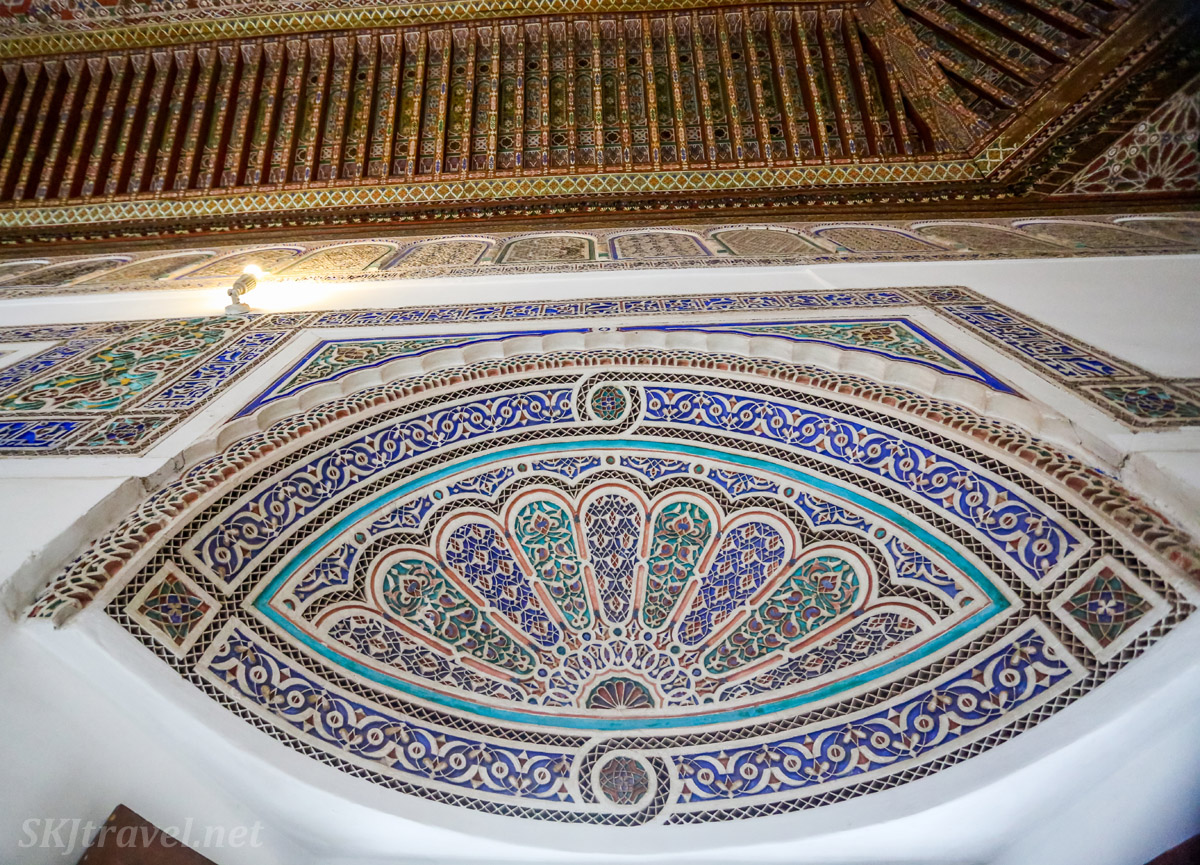 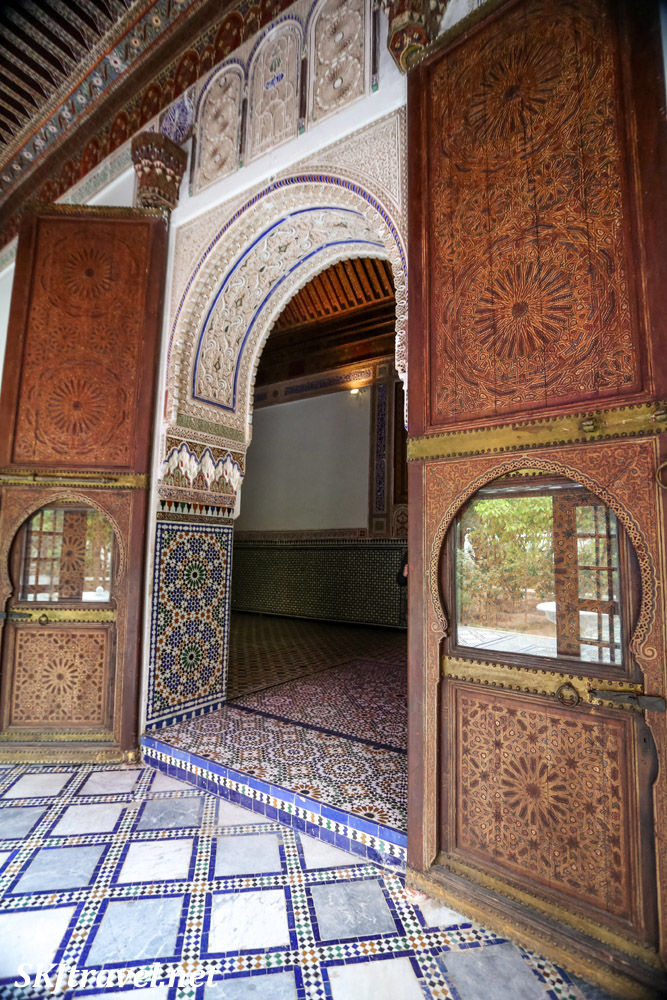 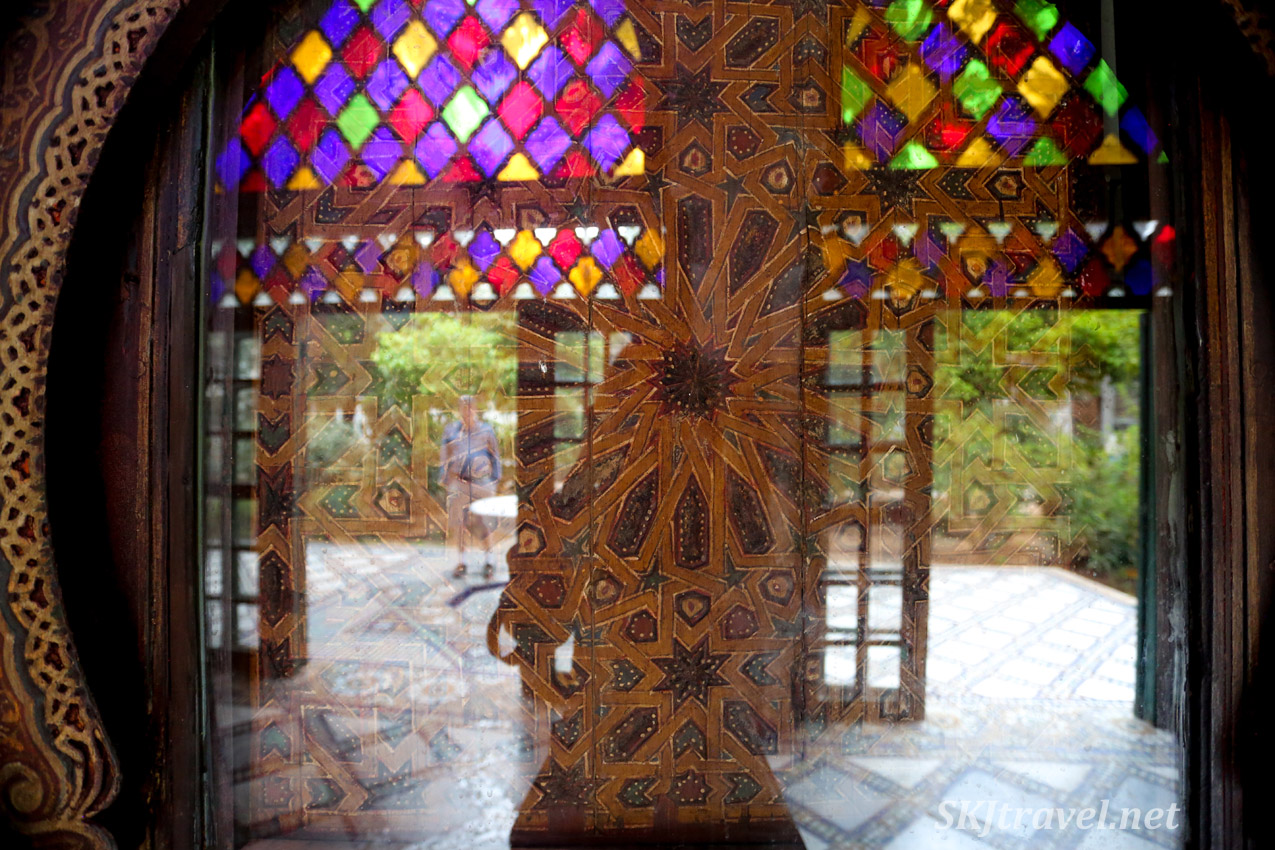 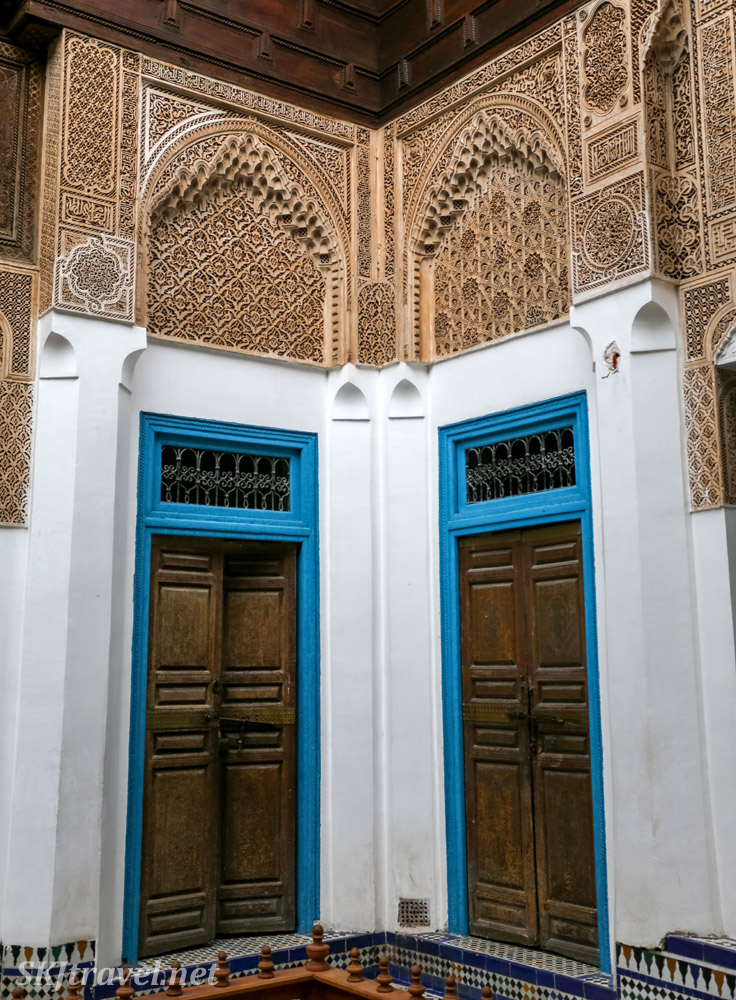 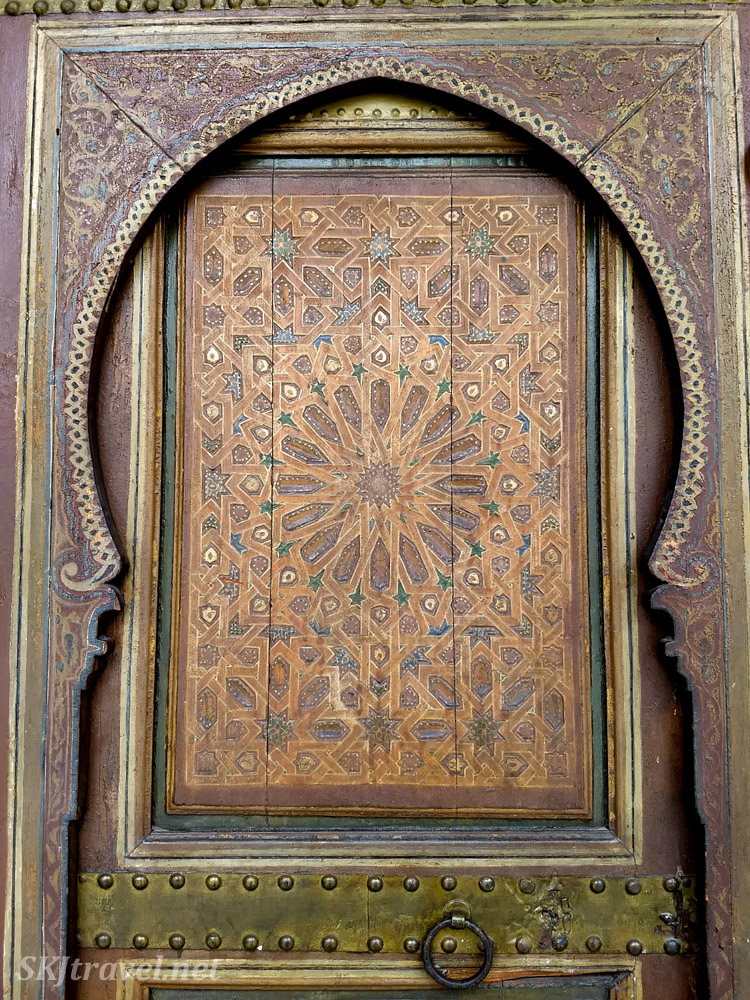 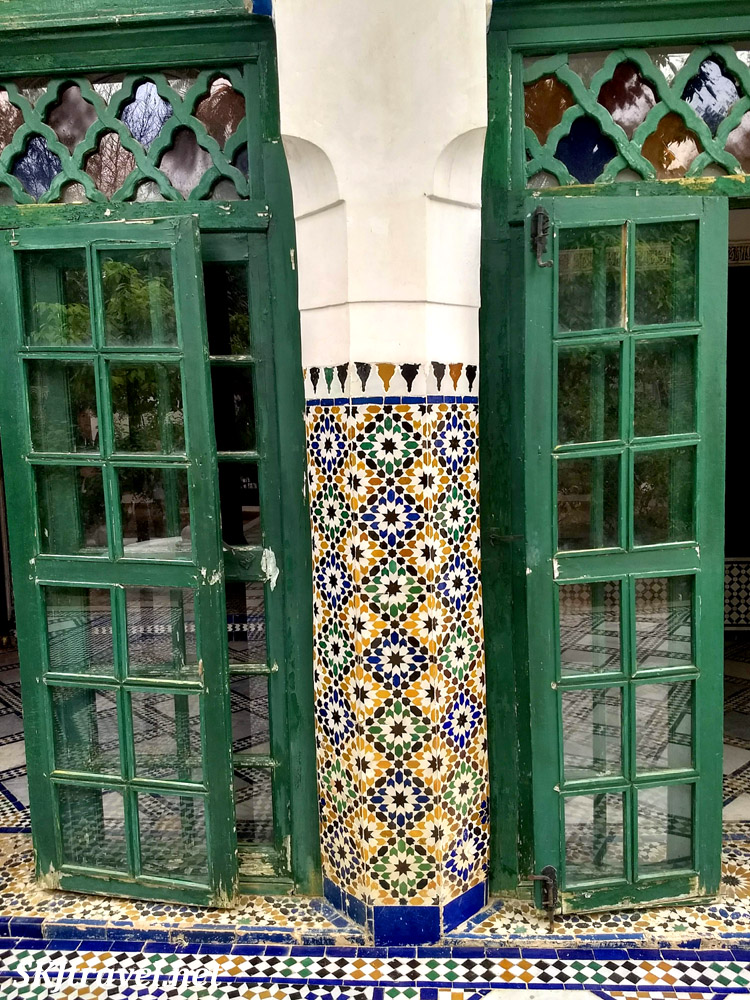 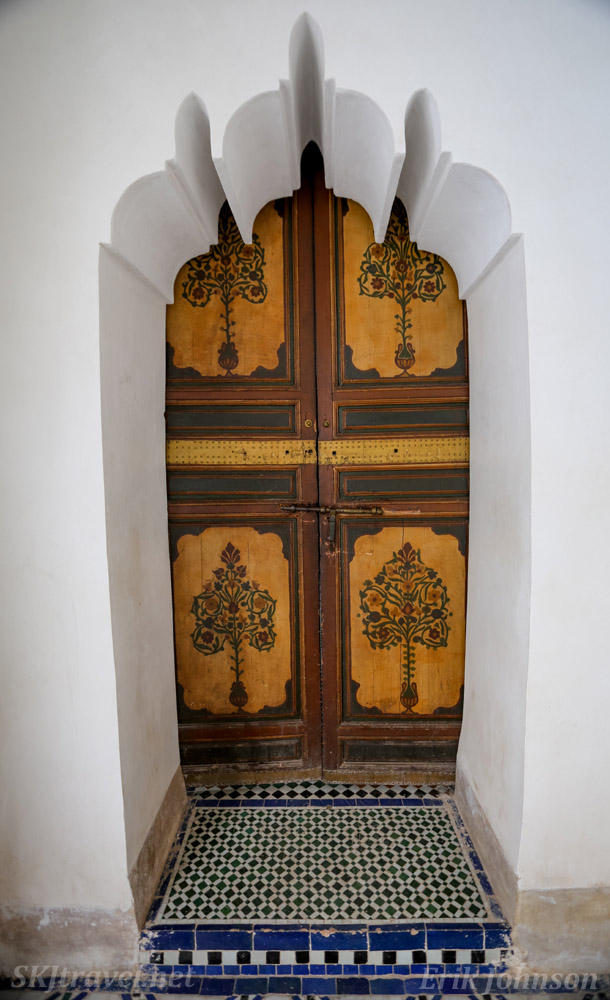 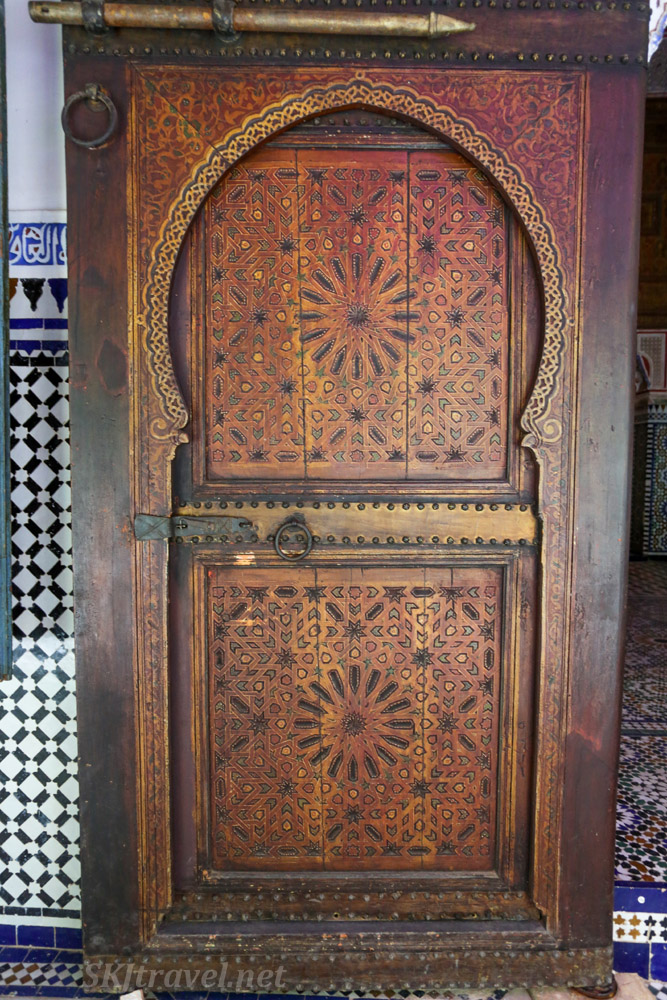 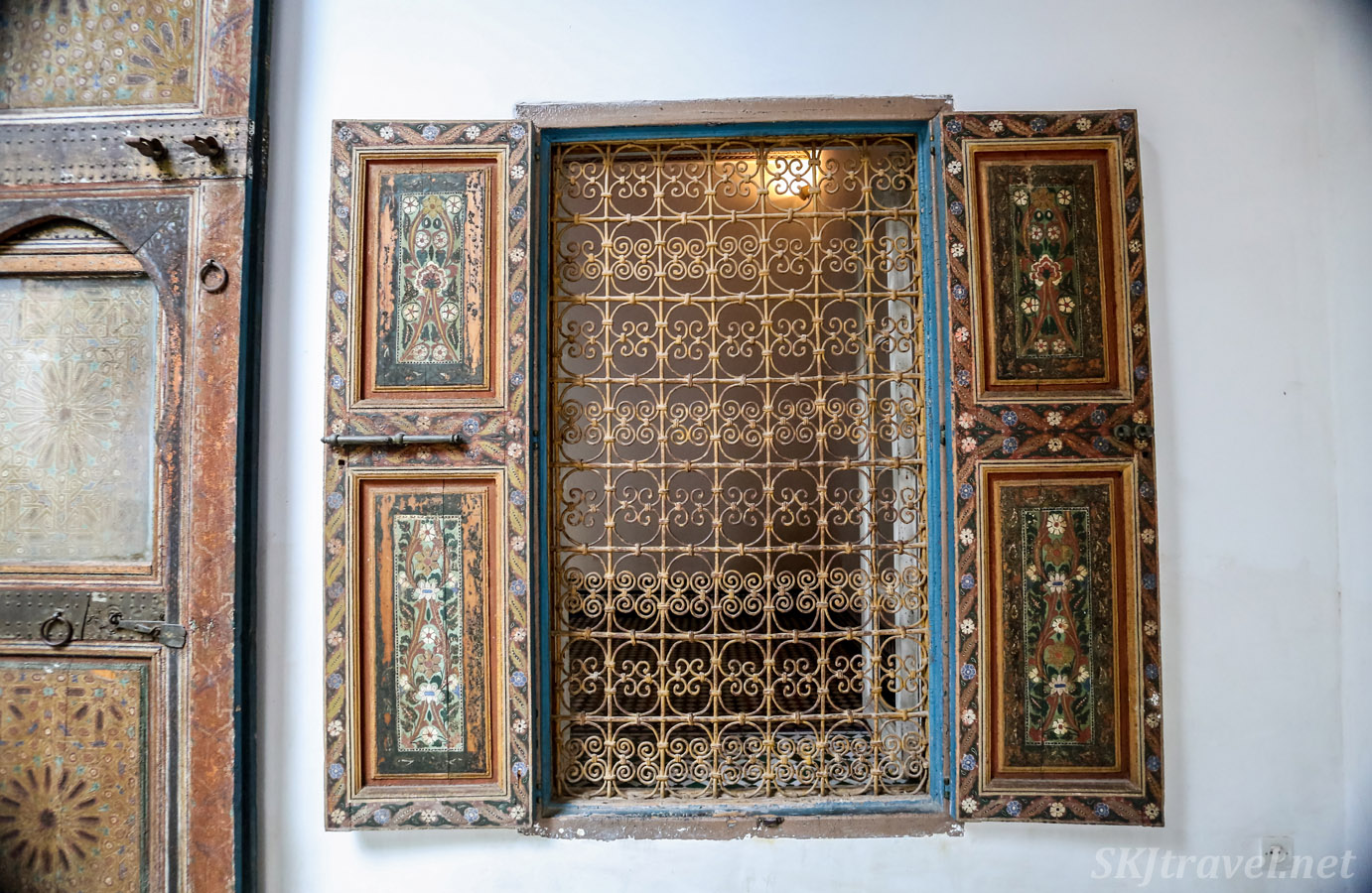 Fancy a fountain, anyone? 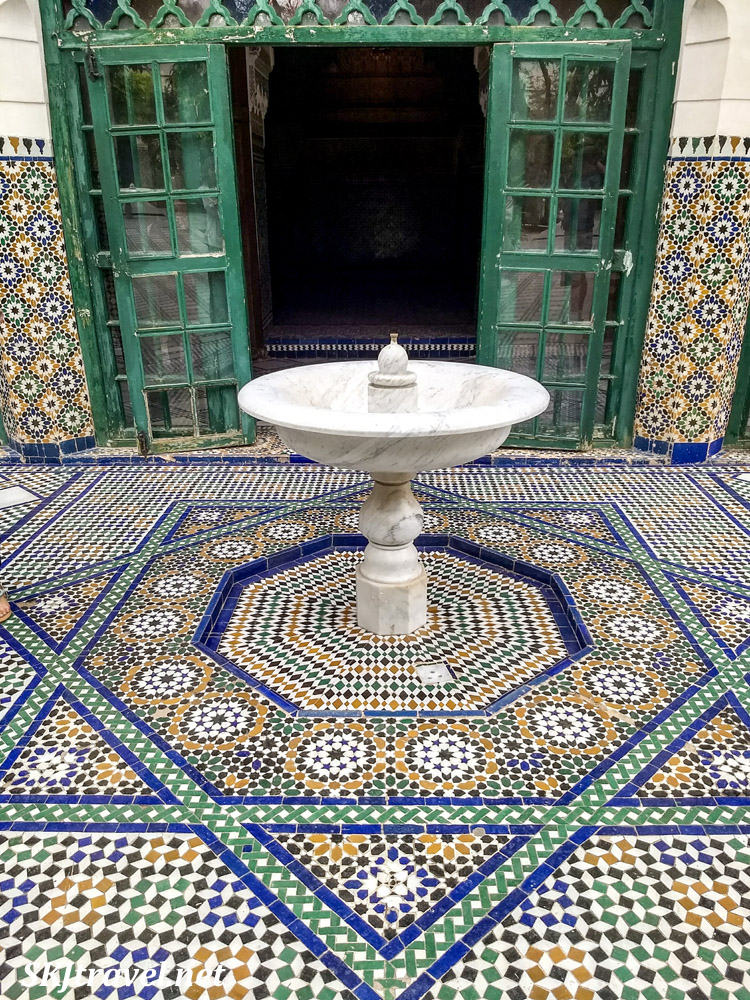 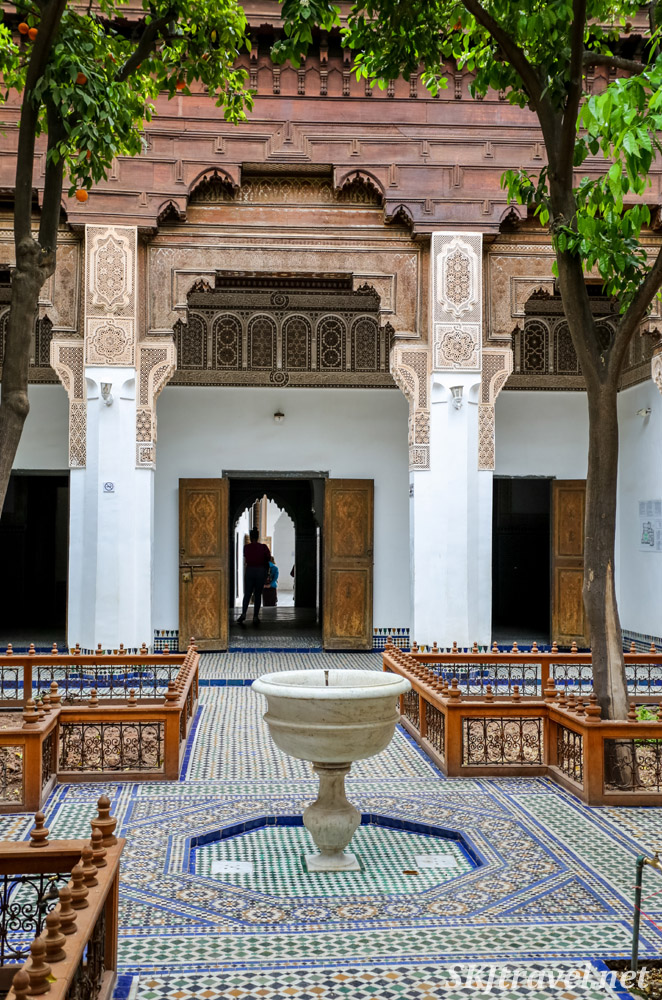 Just another crazy-fancy room below. I can't imagine actually living in this place -- the rest of the city, the largely monotone pinkish-orange medina, the gray cobblestone streets, would seem so drab and bland and boring. If I were the palace's resident, I think I would feel scared of the dullness of the world outside and rush back home as quickly as possible to the comforts of color and design. 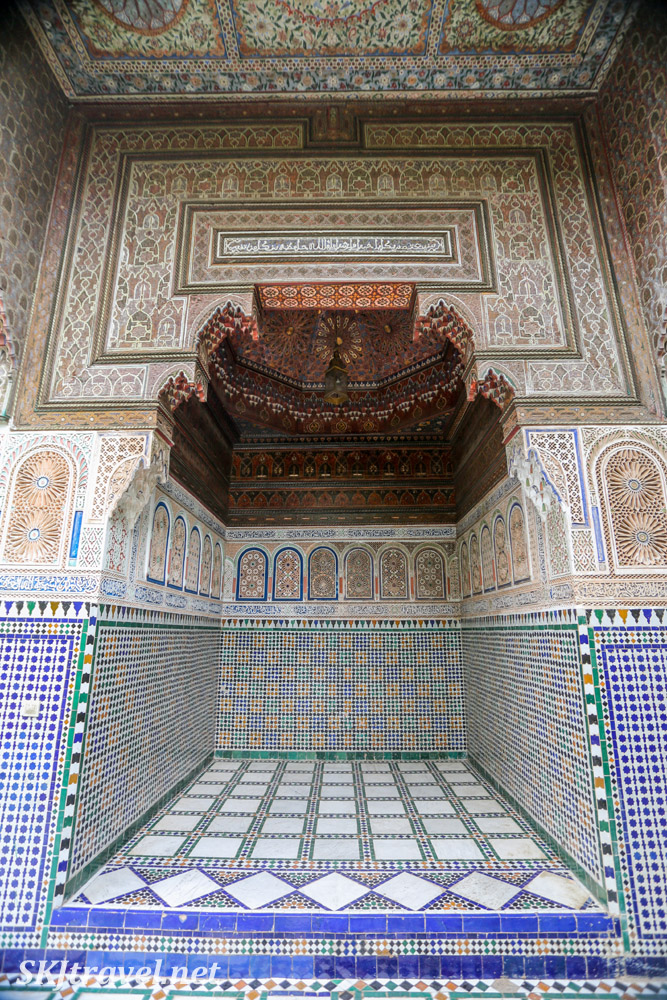 But now, dear readers, we must leave this delicious grandeur and go back to our simply decorated lives. I wonder how the grand vizier and his concubines would feel being lifted up and plopped into a minimalist-designed house. I think it would feel like a lunar landscape! Or in my house they would just feel disoriented and confused by the widespread randomness and pockets of chaos and wonder when I was going to get someone in to paint those plain wooden beams.