The Lost Tombs of Marrakech and a Jaunt in the Jardin

I decided to check out the Saadian Tombs in Marrakech based only on the fact that I love cemeteries and tomb stuff and a recommendation from another FB friend. But I really had no idea what they were, so I was stunned to find something so grand and lavish beside the crowded cobblestone alleyways of the medina.

On the way in, we read some information panels on the walls along the tunnel that led into the necropolis about how the tombs were discovered in 1917 and restoration work began, etc. This didn't really help me imagine any better what we might see, and it certainly did not prepare me for the soaring ceilings and incredible craftsmanship ... how could something so spectacular be lost in this crowded ancient city such that it was then "discovered?" I mean, usually underground chambers and buried treasure are "discovered," or buildings that lie deep deep in a jungle or mountains. 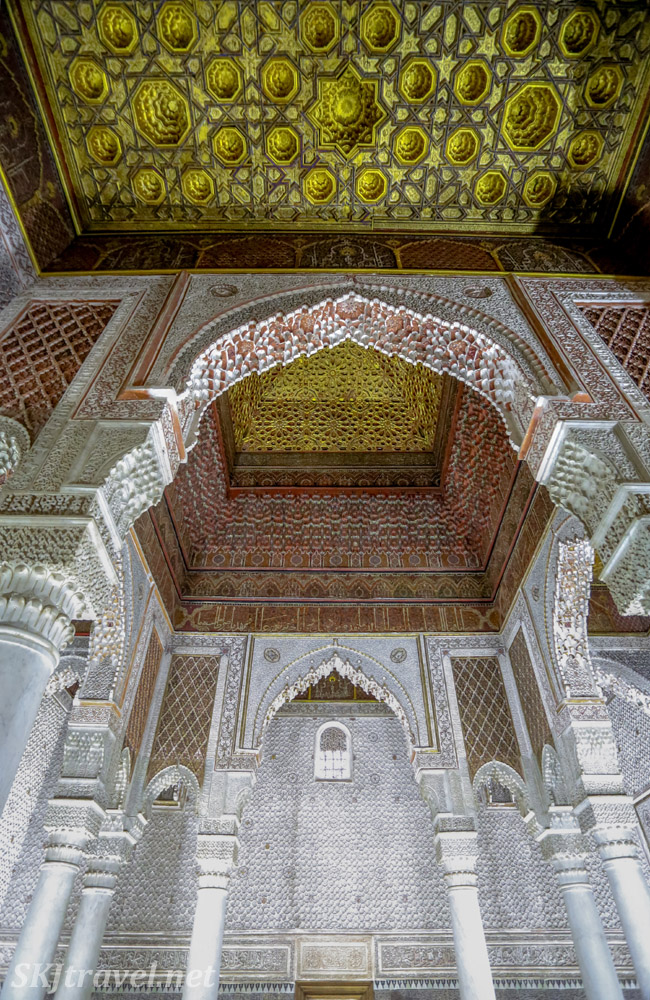 Evidence suggests that the area might have been used as a burial ground from as far back as the 1300s. But the large mausoleums were built in the late 1500s by sultans of the Saadian dynasty (also spelled Saadien). The founder of the Saadi dynasty rests in one which was built by one of his sons (a subsequent sultan). Then progressively more elaborate mausoleums were added, the last and most magnificent one was built by Sultan Ahmad al-Mansur who died and was buried there in 1603. As I have not been a student of Moroccan history, the name did not mean much to me, but apparently he was the most renowned ruler of the Saadian dynasty and gained control of the desert caravans which supplied Europeans with sugar at exorbitant prices -- funding his ability to make opulent tombs and palaces -- as well as other high-demand commodities like gold, slaves, ivory, and ostrich feathers.

So this is Ahmad al-Mansur's tomb in the middle, in the room called the Chamber of Twelve Columns. 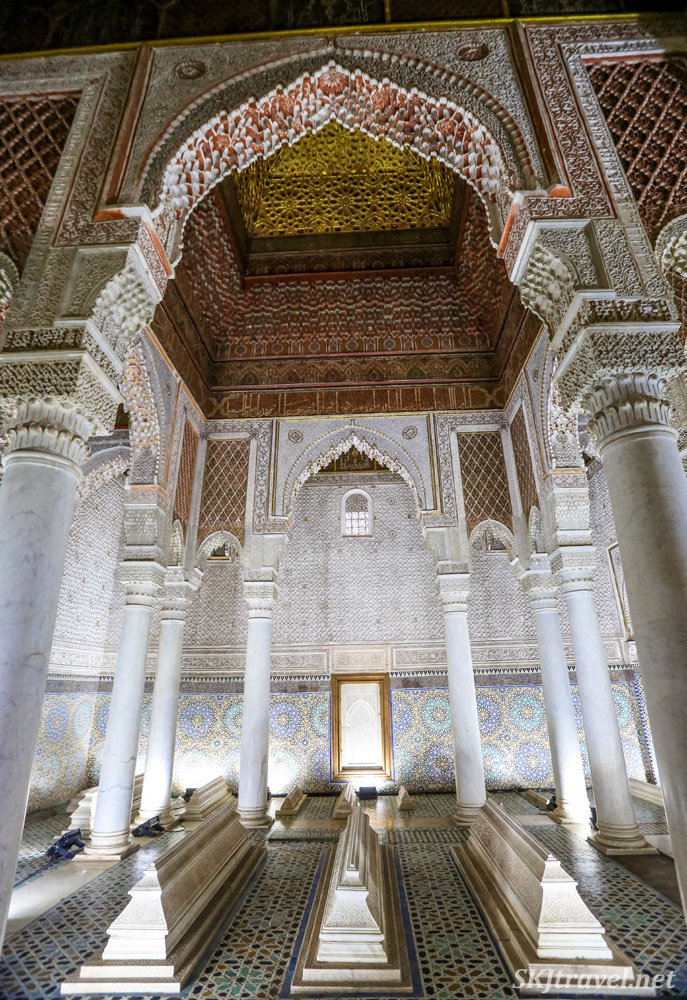 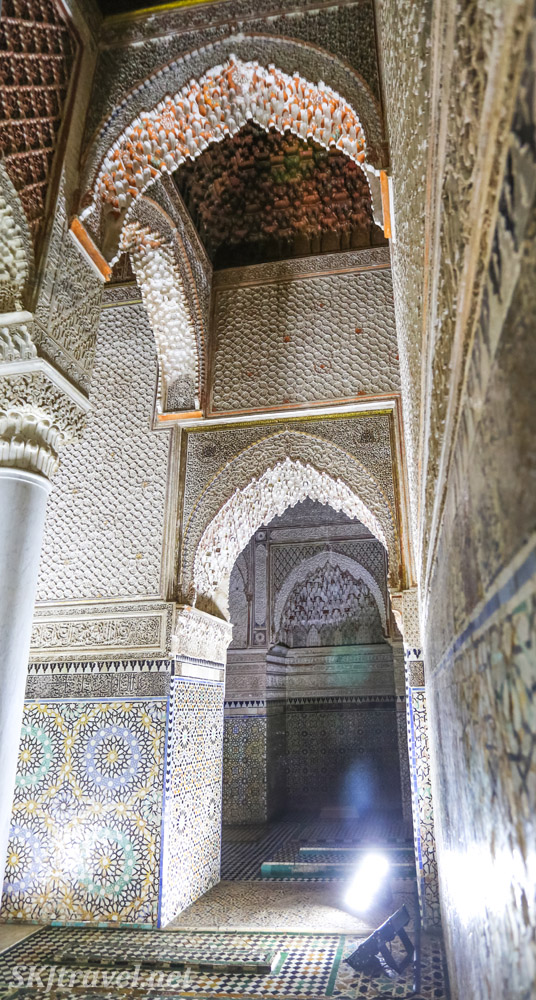 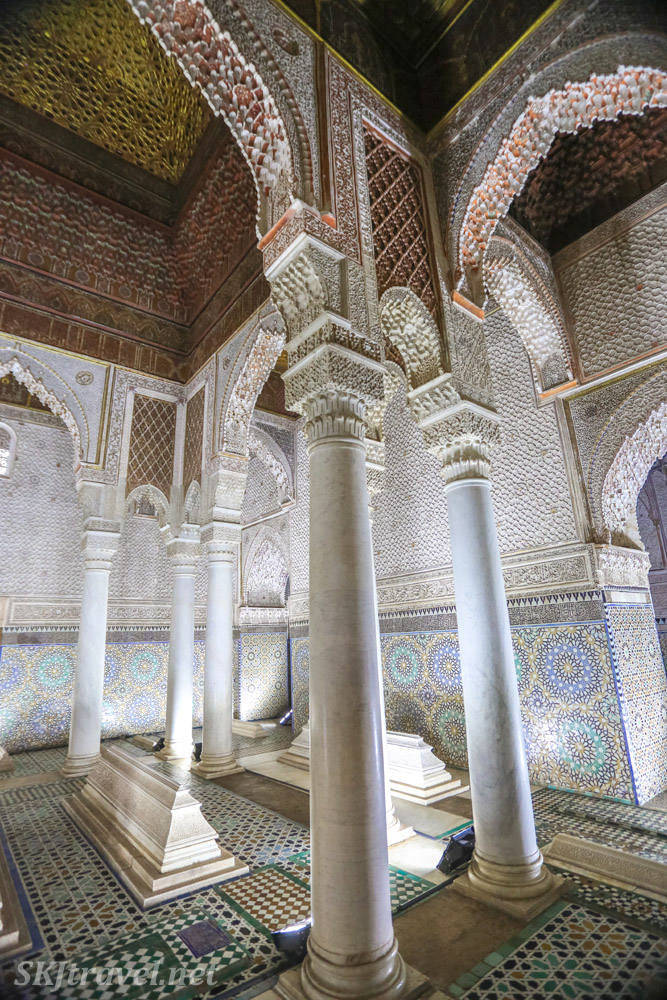 The elaborate cedar wood ceilings of the chambers were high achievements of Moroccan and Saadian art. It's hard to tell the difference sometimes between the materials all carved with similar intricacy -- carved stucco is perhaps the most prominent material, but also parts of the Chamber of Twelve Columns have marble carved with the same detail. Add in the meticulous use of colored tiles, and the artistry and craftsmanship represented is truly overwhelming. 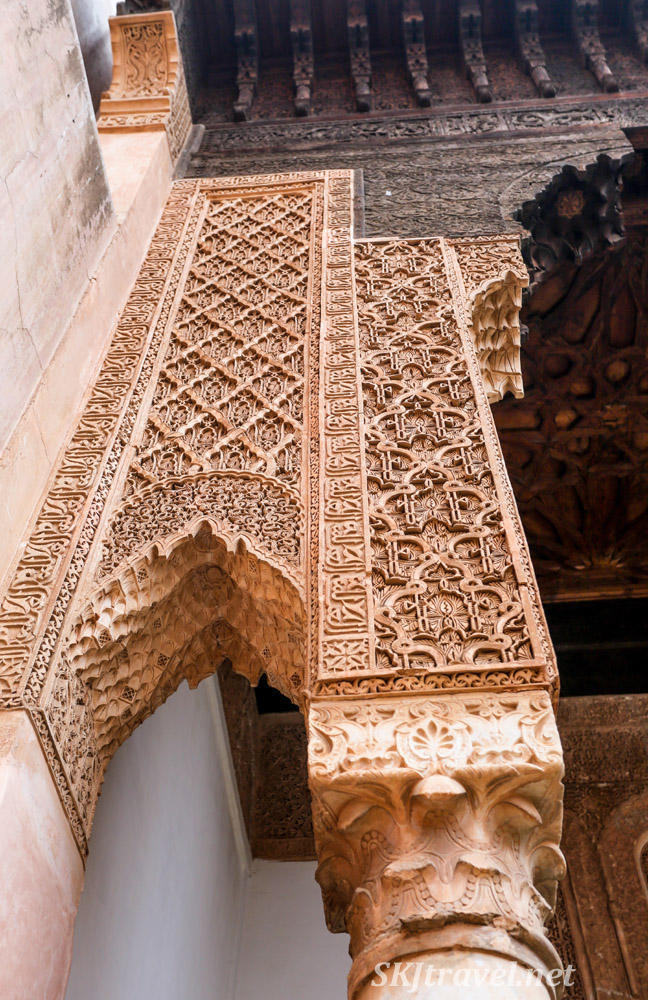 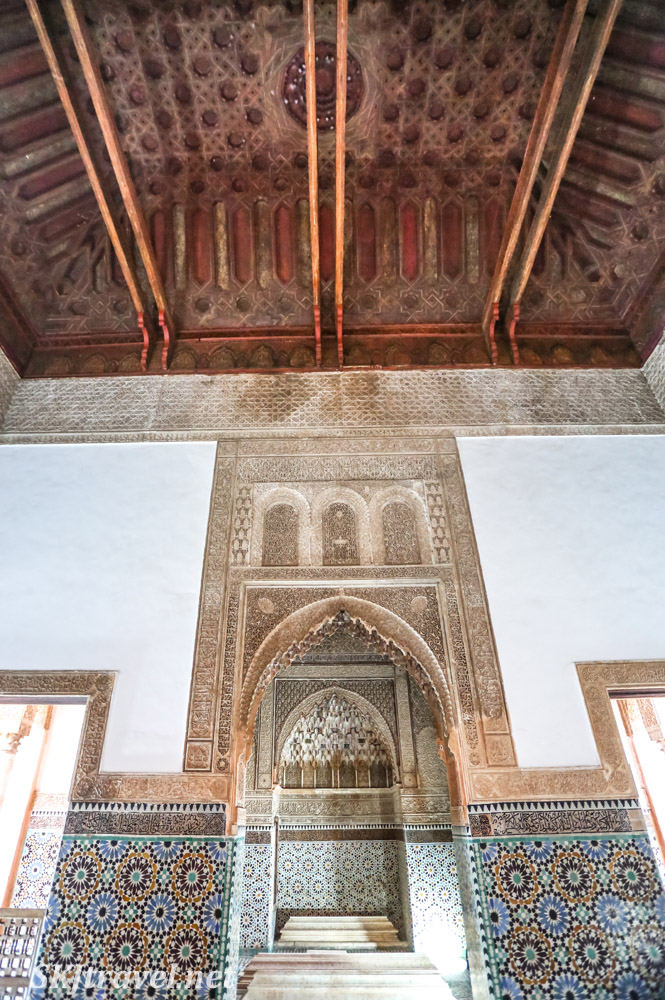 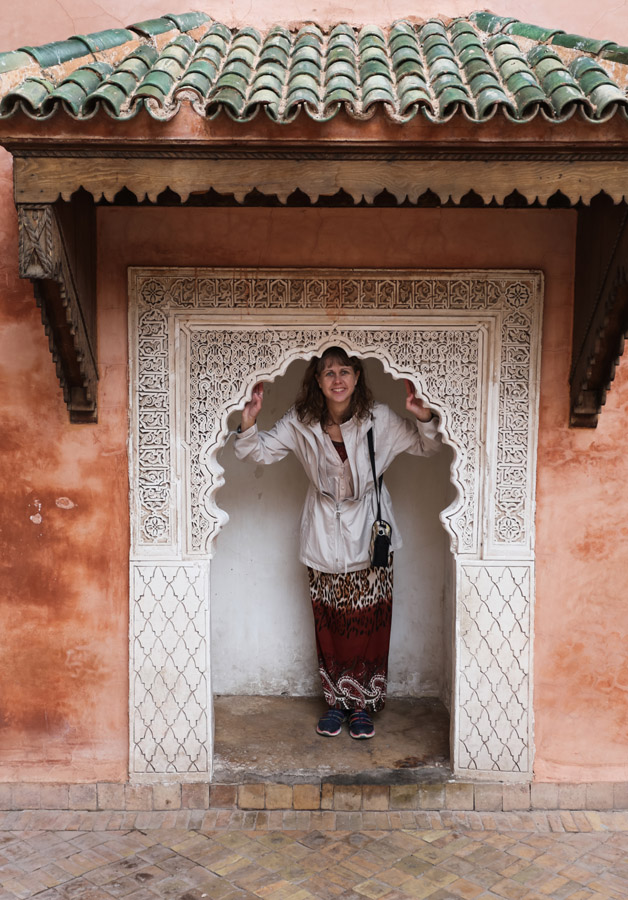 In the whole of the burial complex, which is relatively small (just a few mausoleum buildings and small courtyards), there are about 160 people buried, I think a large number having some relationship to this al-Mansur ... wives, sons, advisers and trusted officials. Naturally, there are plenty of kitty caretakers roaming the courtyards keeping watch over the graves. 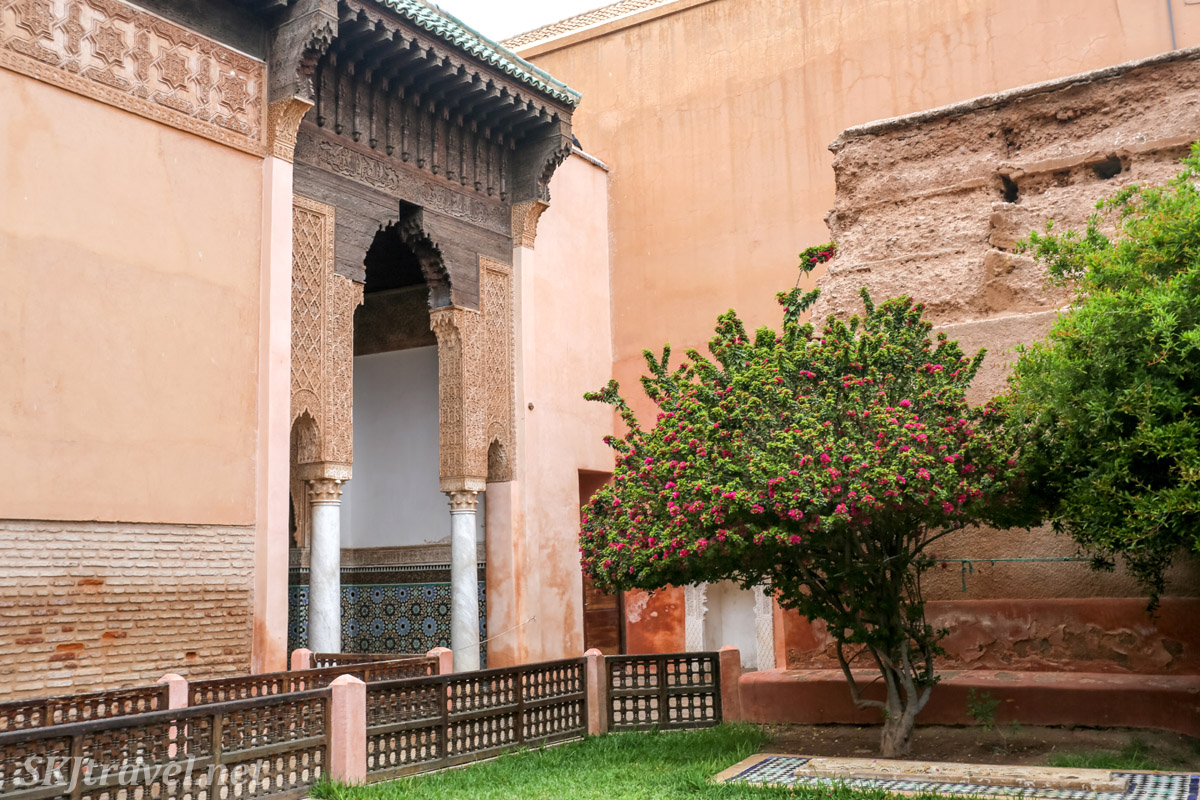 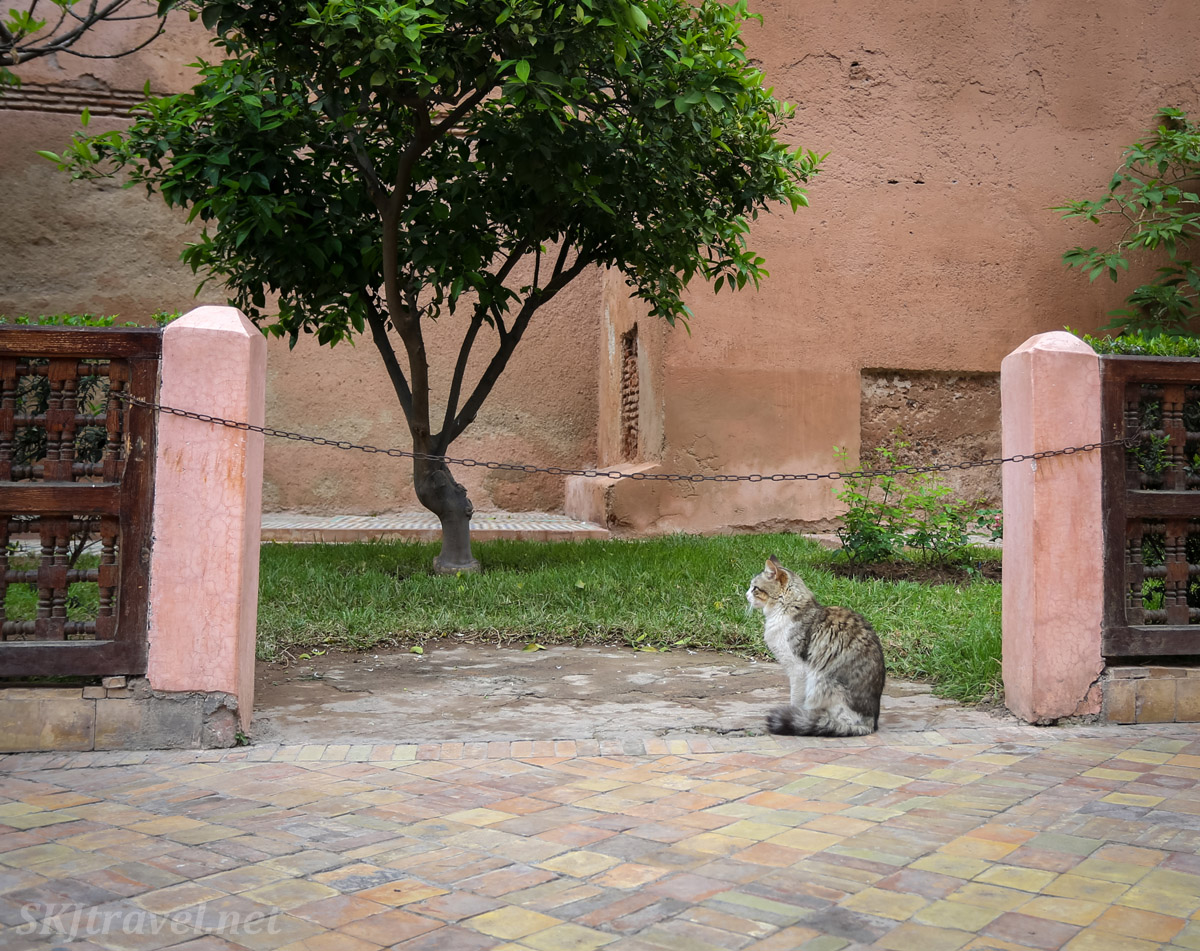 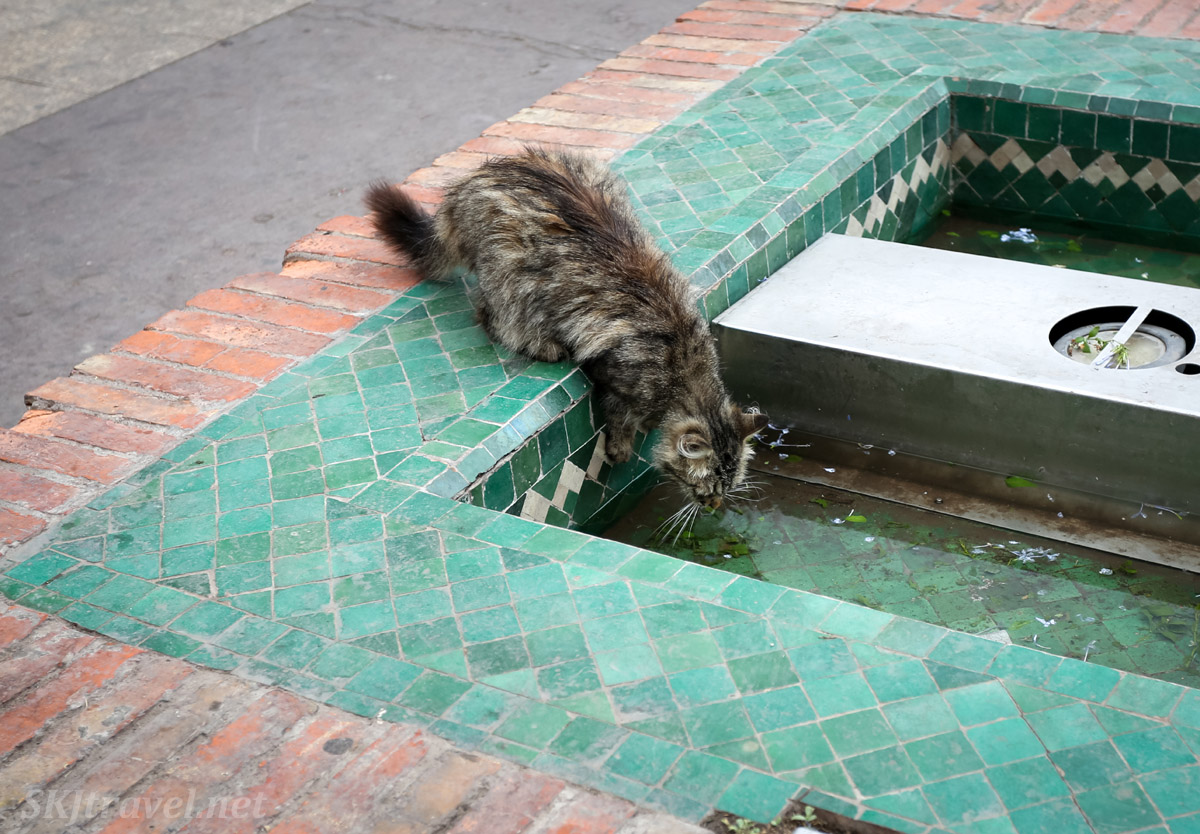 By the year 1672, the Saadi dynasty was over and a dude named Moulay Ismail came to power in Morocco and went about constructing his own legacy, in the pursuit of which he had the Saadian Badi Palace destroyed, but fortunately he seemed to have scruples about demolishing a place of burial. So instead, he simply sealed all the entrances, walling it off, which ultimately achieved the same aim -- out of sight, out of mind, the neglected tombs were largely destroyed by the indifferent forces of weather and time. And so the beauty of the detailed wood and stucco work started to slip from memory until it was completely forgotten, even though the necropolis is adjacent to the Kasbah Mosque, one of the main attractions in the city. Of course we could not visit inside the mosque as we are not Muslim. 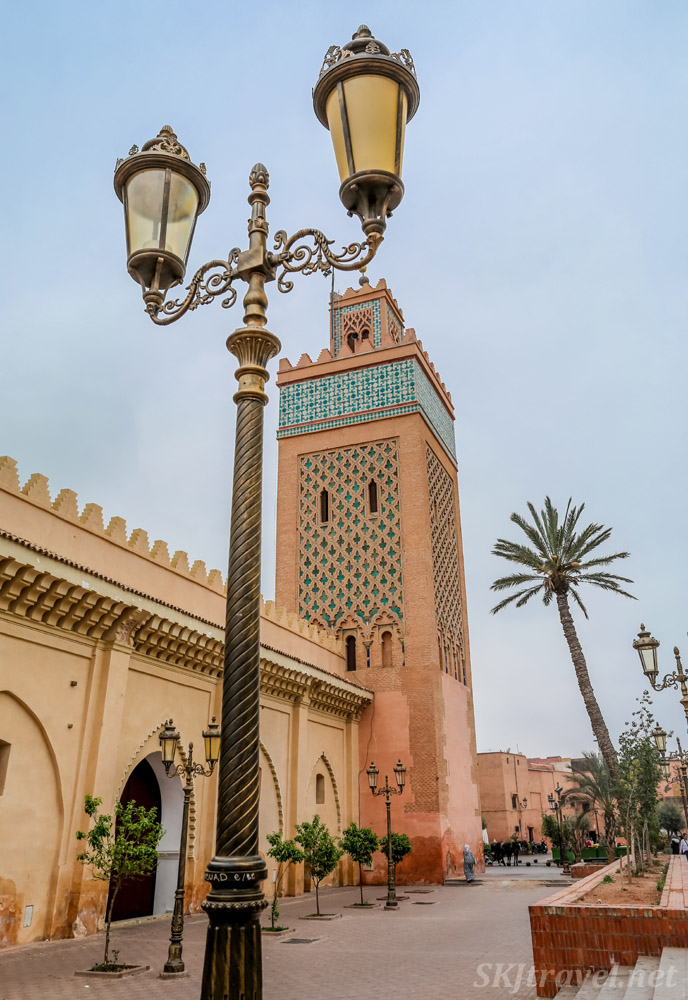 Then in 1917 a plane was flying over the city taking aerial photography and saw this space from above. Imagine, you'd be like, "Holy cow! What is this?" I can imagine a bit of explorer adrenaline rush. This is a picture of what the place looked like when they first started restoration work in 1917. We watched a video of the restoration process, which is impressively painstaking and completed with admirable patience. 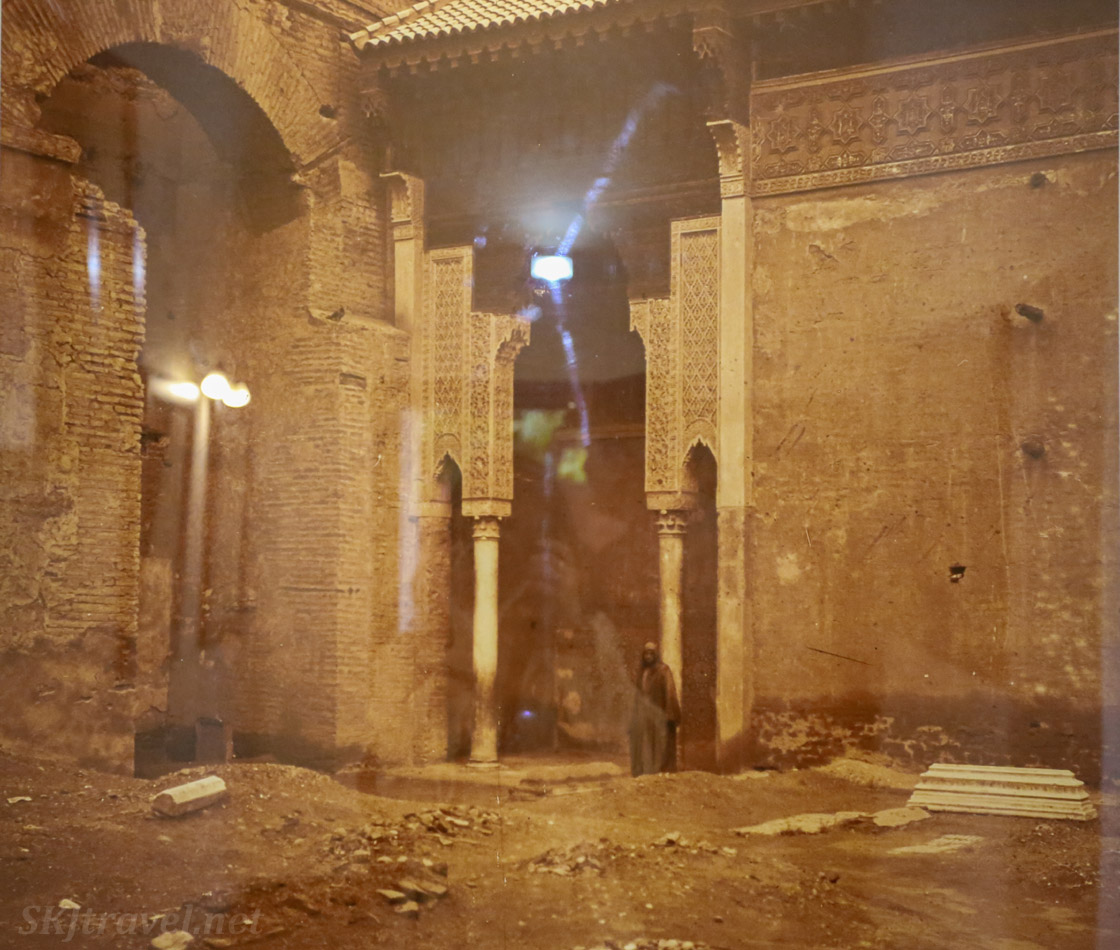 I could just stare at the details for ages, imagining the time, effort and skill it took, mesmerized by the patterns. This is the Chamber of Lalla Mas'uda, the oldest mausoleum in the necropolis, built over the tomb of the founder of the Saadian dynasty and includes now the tombs of the son of the founder who commissioned it and the mother of Ahmed al-Mansur. 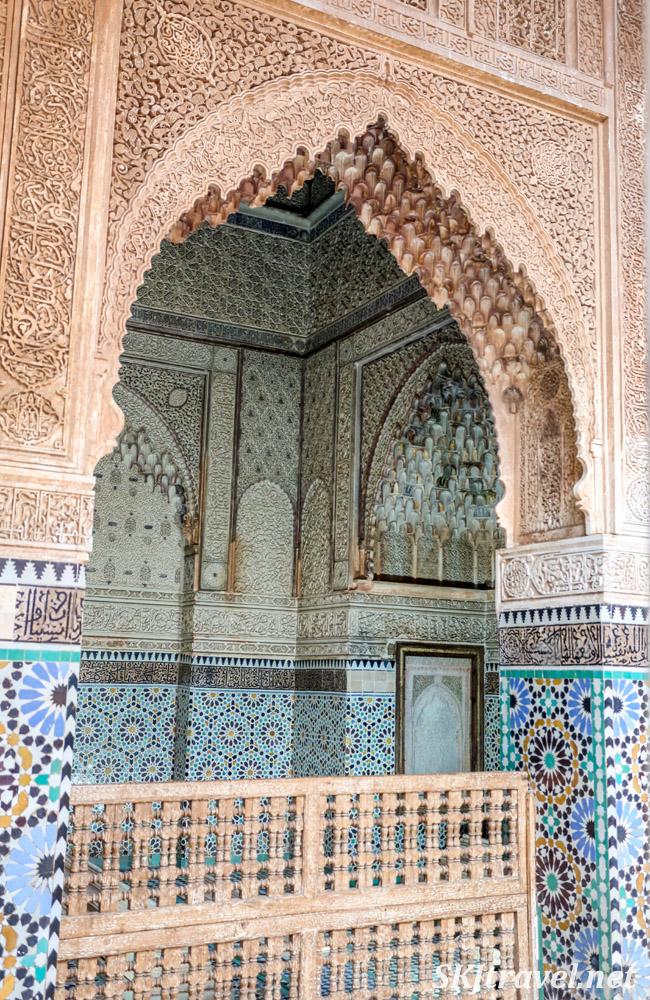 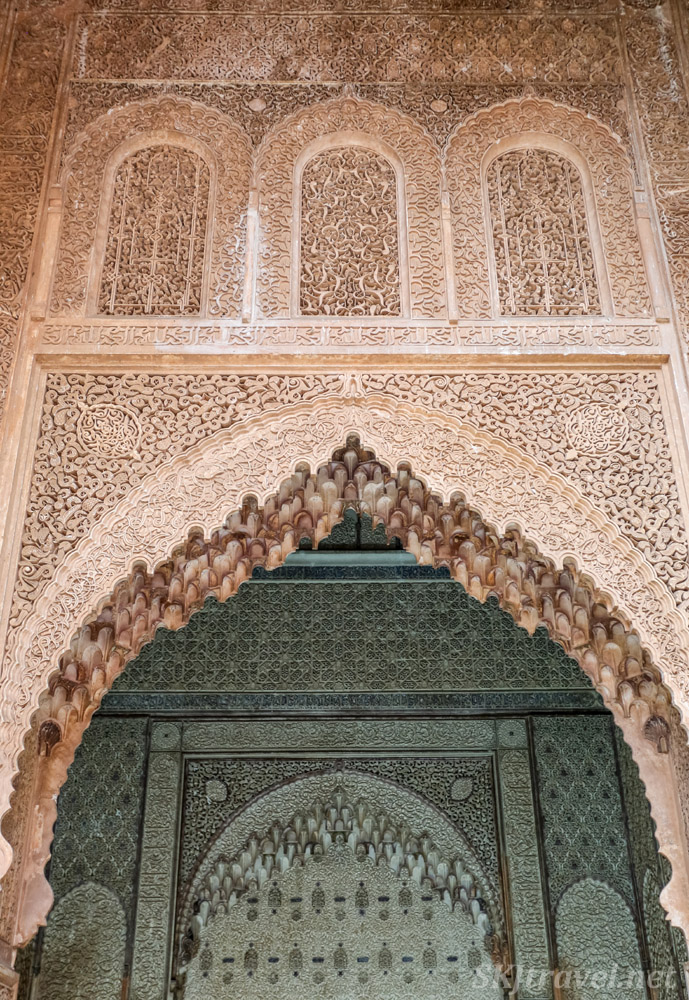 I wanted to share the really impressive stuff first, but the day we saw the tombs began with a jaunt through the Jardin Majorelle. It's a short walk outside of the medina. It's a small botanical garden but full of color and variety and water features. It was put together over several decades by French painter, Jacques Majorelle. He referred to the garden as “vast splendours whose harmony I have orchestrated… This garden is a momentous task, to which I give myself entirely. It will take my last years from me and I will fall, exhausted, under its branches, after having given it all my love.” He acquired the land and built the gardens for his own pleasure, but the upkeep was costly and so he opened it to the public in 1947 as a way to pay for the maintenance through entrance fees. 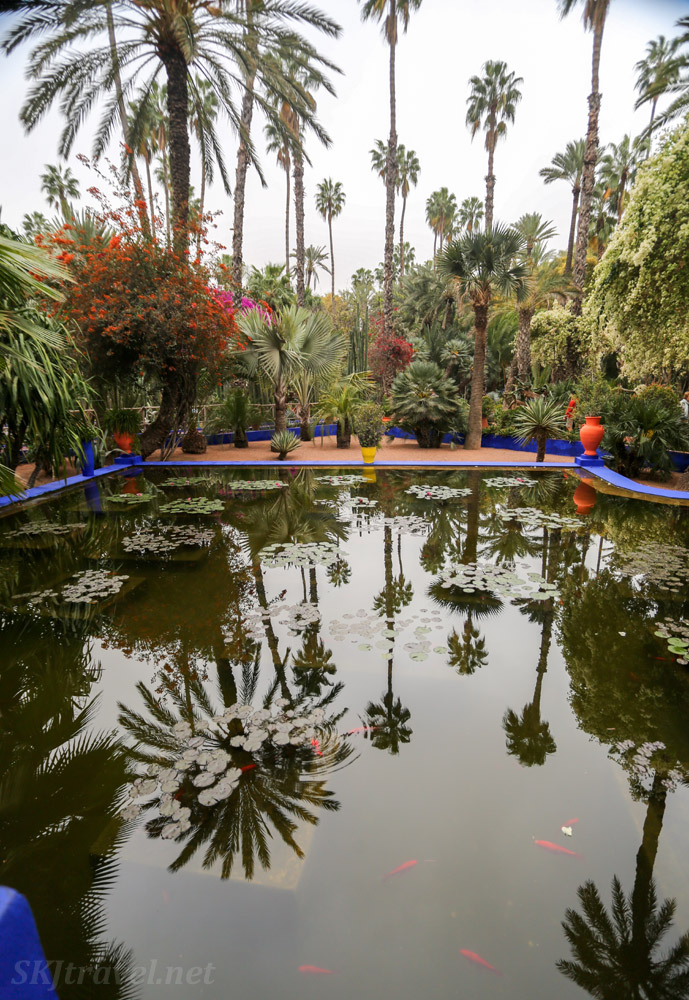 At its "height," I believe it was about 10 acres. But after suffering some accidents and a divorce, he was forced to subdivide it on several occasions, and eventually sell what remained to pay for medical expenses. He died in France in 1962 after he was taken there for medical treatment, sadly separated from his beloved garden. His passion, essentially abandoned after his death, fell into disrepair.

Then, much like the happy fate of the Saadian Tombs, the garden was "discovered" by the fashion designer, Yves Saint Laurent, and Pierre Bergé. Enchanted with it, they bought the garden in 1980 and saved it from being razed and the land used for a hotel complex. The new owners undertook the restoration of the garden, respecting the vision of Jacques Majorelle. 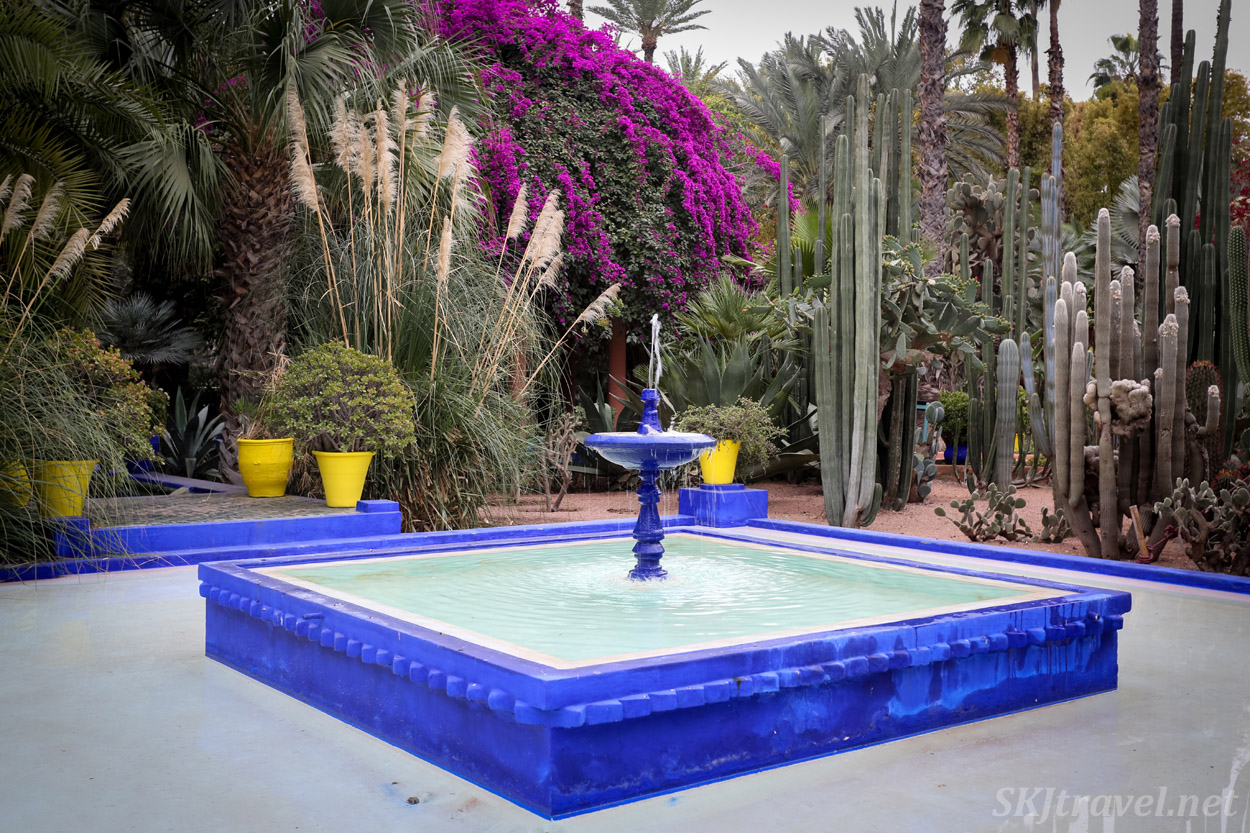 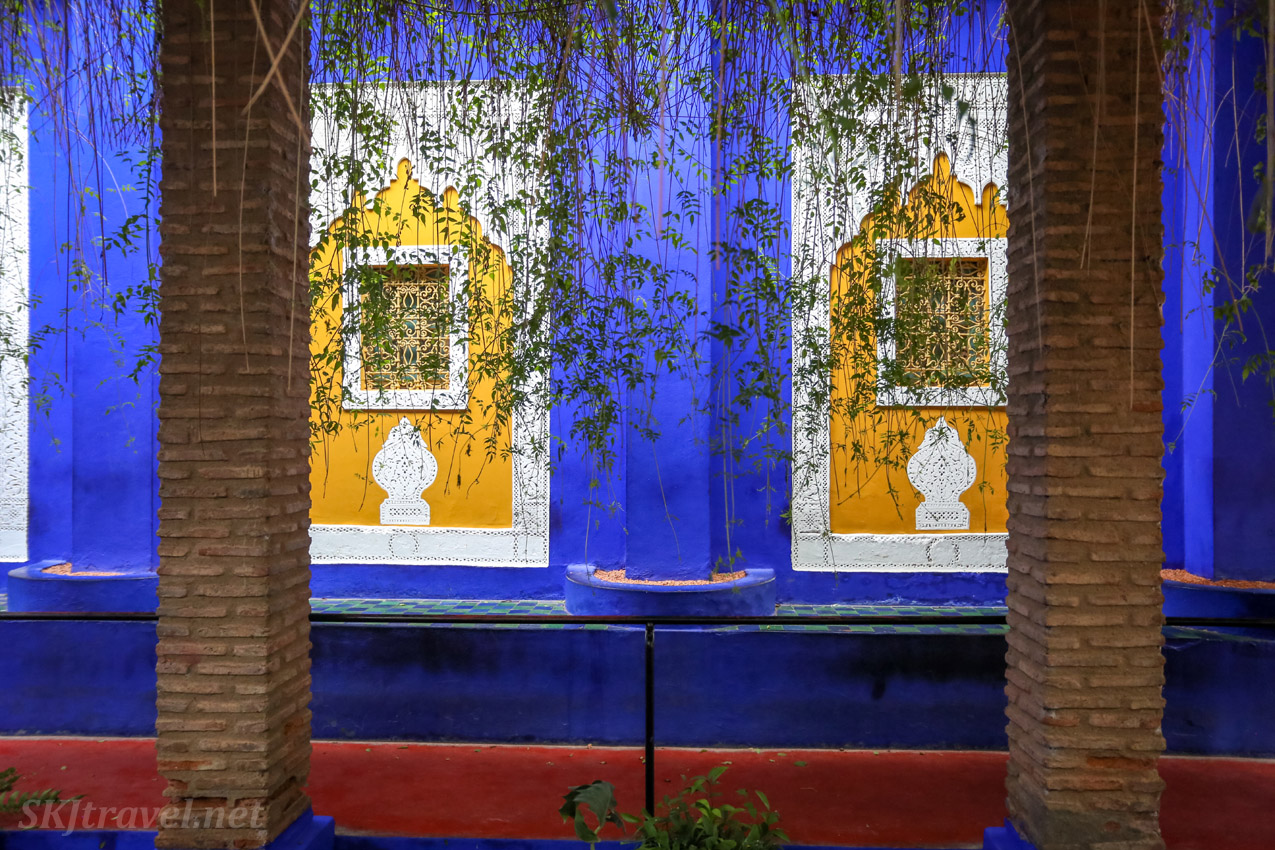 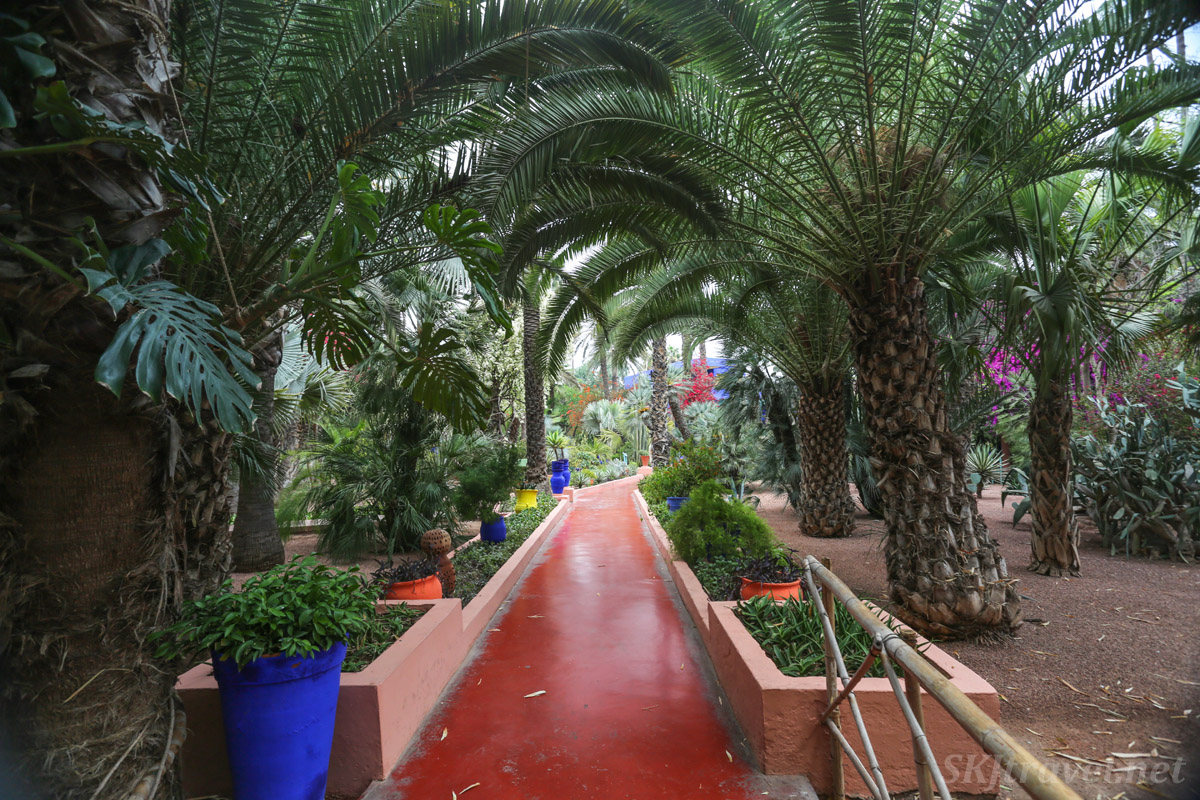 In 2008, Bergé donated the garden to a Parisian foundation after the death of Yves. At two and a half acres now, new plant species have been added since 1999, increasing the total number from 135 to 300, and a team of 20 gardeners works to maintain the garden, its ponds and fountains. 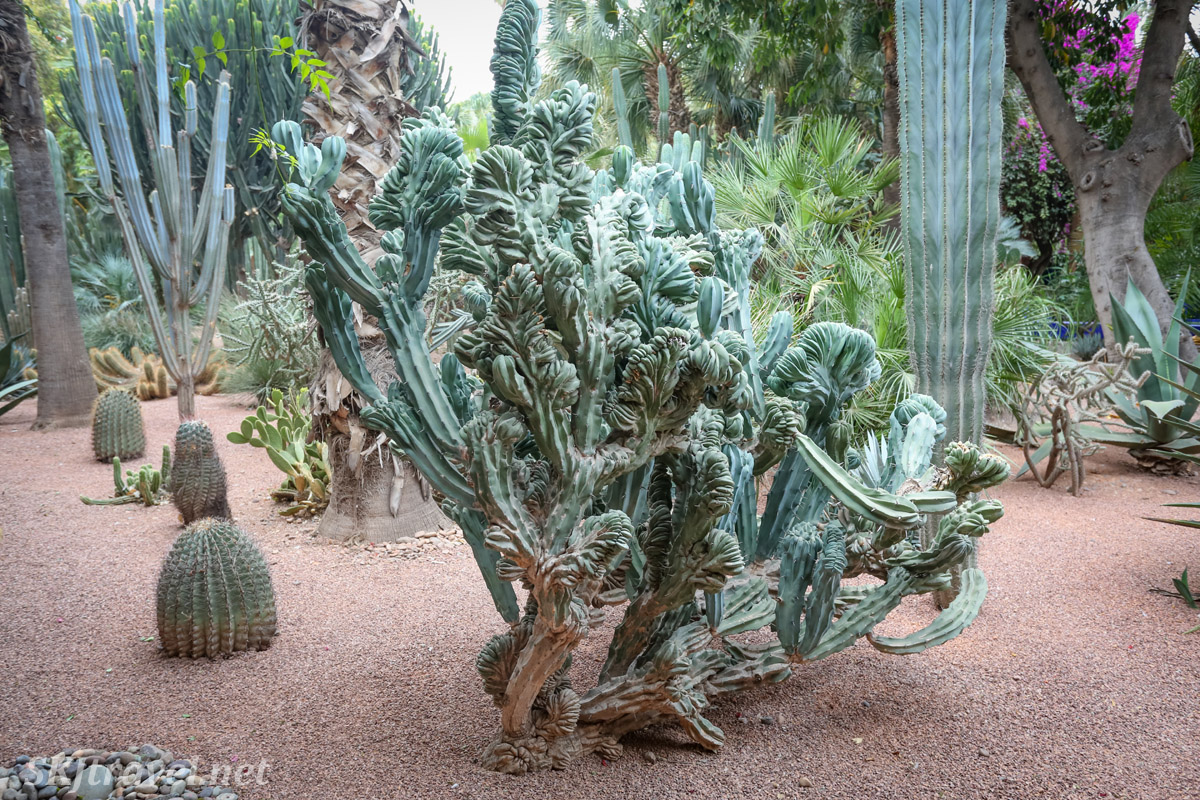 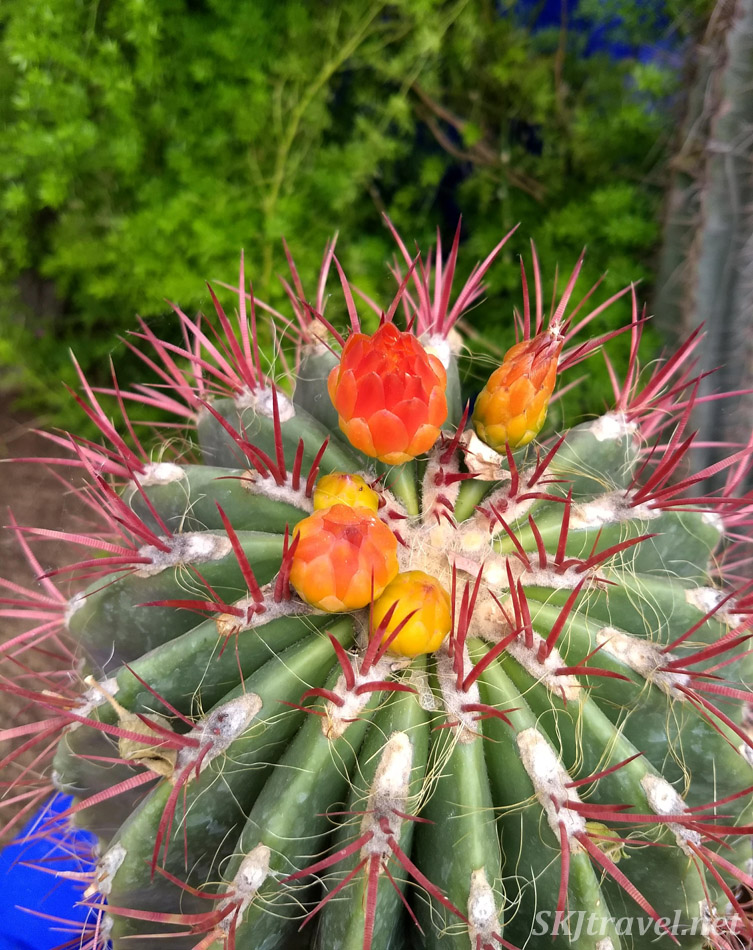 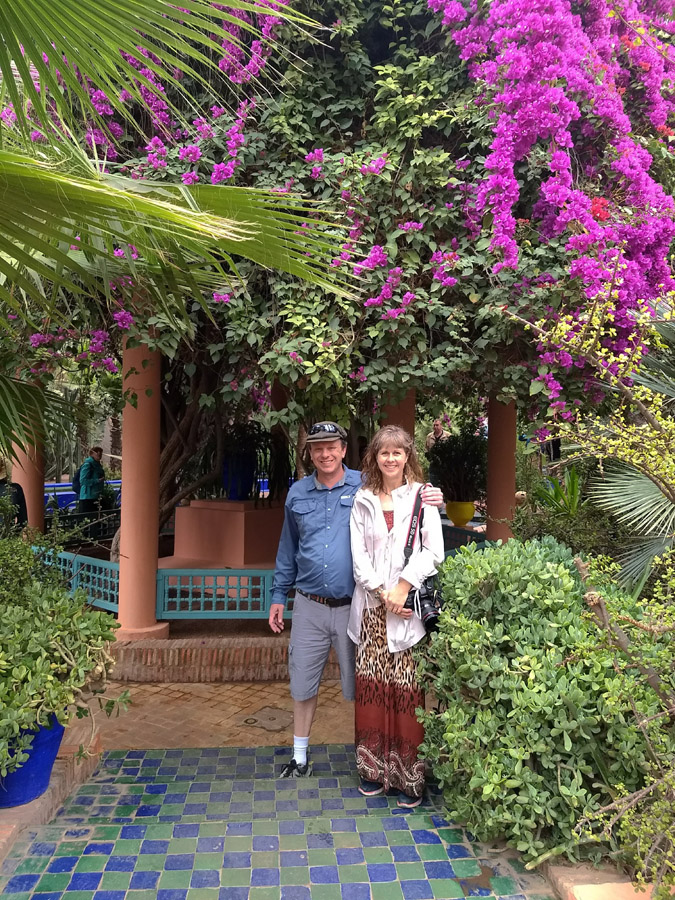 The proprietor of our guest house suggested we couldn't walk to all the primary tourist sights, most of which ring or are inside the medina, as they are too far apart and we should take a guided taxi tour. As guided tours are just not our thing, we ignored the advice, but if you're trying to see the city in one day, she absolutely has a point, but if you have a few days (as we did) to delve into the city, I think you will find your feet can cover a lot of ground, particularly if you have Google Maps to help you navigate expediently. We didn't hit everything I've seen on "best of" and "top 10 lists" for the city, but the tombs and the garden were two things that I set out with intent to see; we did them both in one morning and I recommend them to other visitors!