I feel I hardly need to provide an introduction to this post ... but if this the first Mexico trip you've joined me on, the following are photos from my favorite little lagoon at Playa Linda, Ixtapa, Mexico. It's known by several names: the crocodile farm (but it's not a farm), the crocodile refuge, the crocodile reserve, Popoyote lagoon, and probably by others. It's a reserve, vaguely fenced off from the public, designated originally for the protection of the American crocodile. However, the lagoon ecosystem is also home to many beautiful species of birds, iguanas, turtles and other creatures. Since I started visiting there, I've watched the roseate spoonbill population explode. I've gotten more adept at spotting smaller birds such as the green heron, which has become a favorite of mine. And I've become fascinated by two types of lizards ... perhaps the most amazing thing of all since I am not a lizard kind of gal. Mostly I am repulsed by them. But these crocodiles and iguanas have opened my eyes and my heart to watching them more closely and appreciating them in their natural environment.

So without further ado ... not much text to accompany this post, just enjoy my menagerie of lagoon creatures. Yes, it's MY menagerie! To see my encounters with them in years past, please see the Ixtapa archive HERE. It feels like my personal little lagoon, haha.

Who to start with? Well why not start with my favorite photo between these two years. A green heron, the light shining on his opened wings to show their impressive iridescence. But I think its little head playing peek-a-boo from under its wing is cuter than all get-out. One of those wonderful surprises, I only saw this detail after getting home and looking at the pics on my large computer monitor. Yet another lesson in not deleting anything on your camera until you get home! 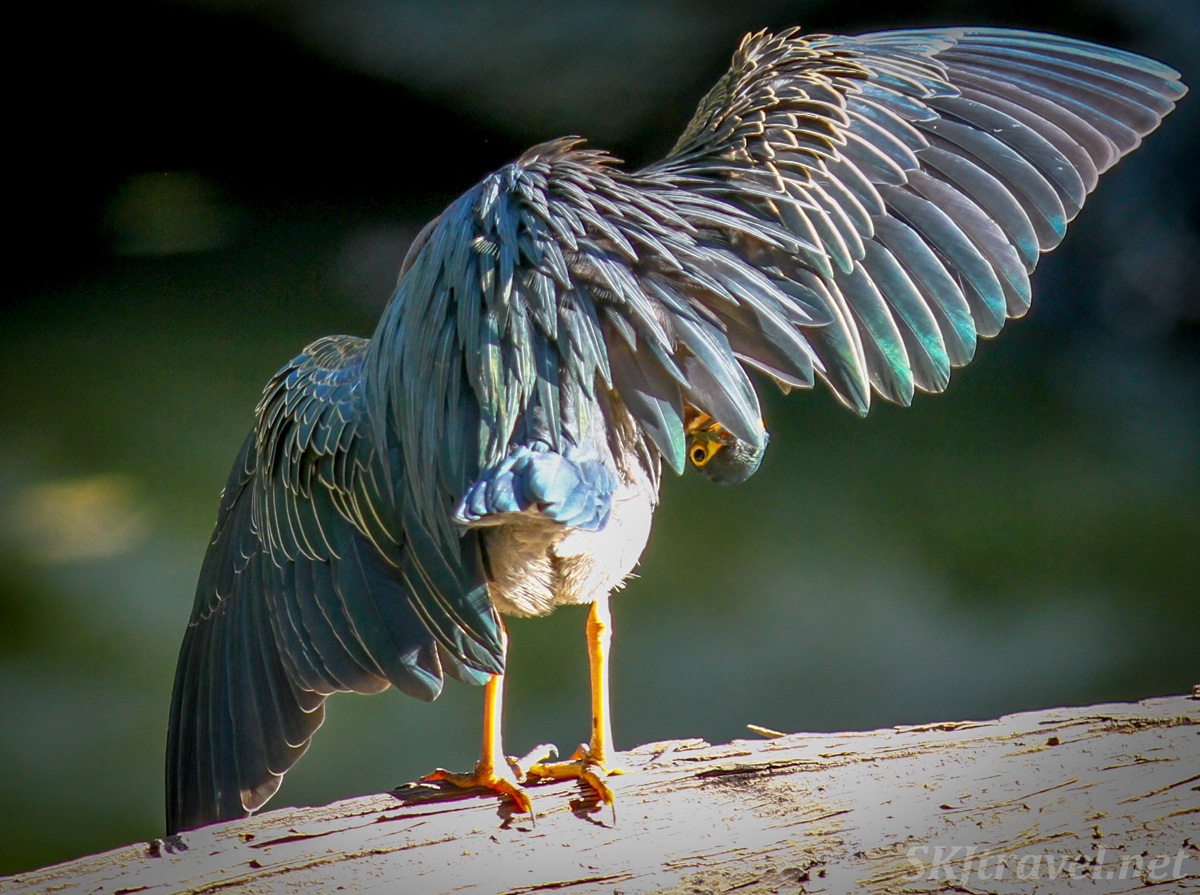 I think one of the most interesting things about the green heron is how different it looks depending on the lighting and the bird's posture. More green herons ..... 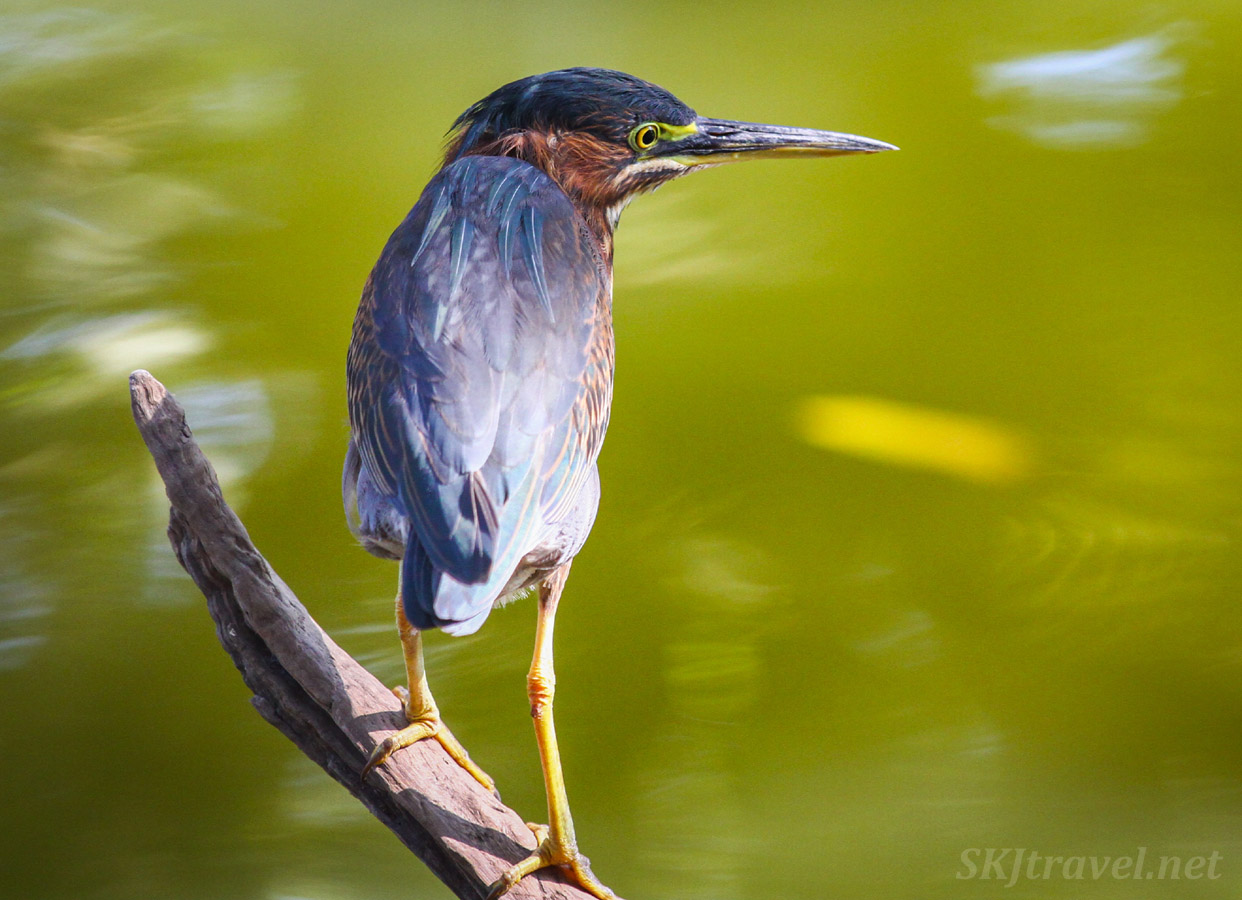 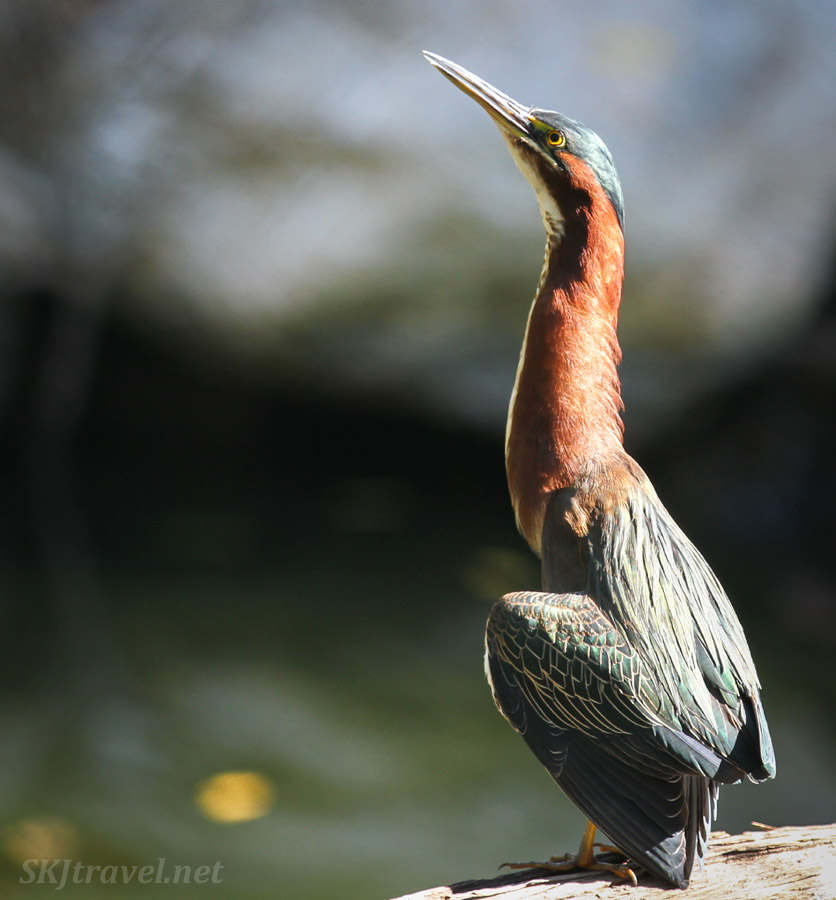 One exciting thing about 2018 was that I saw a brand new species, the wood stork. We visited a couple weeks earlier than we historically have, and caught the migration of wood storks passing through the area. As I've gotten pretty used to the same cast of characters, it was a really nice change. 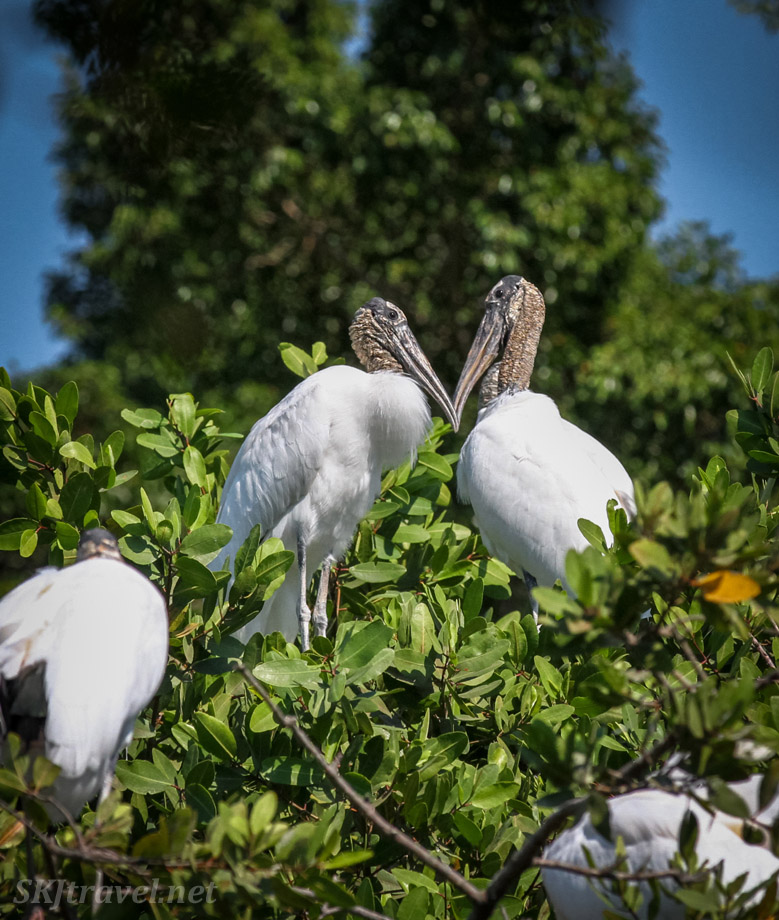 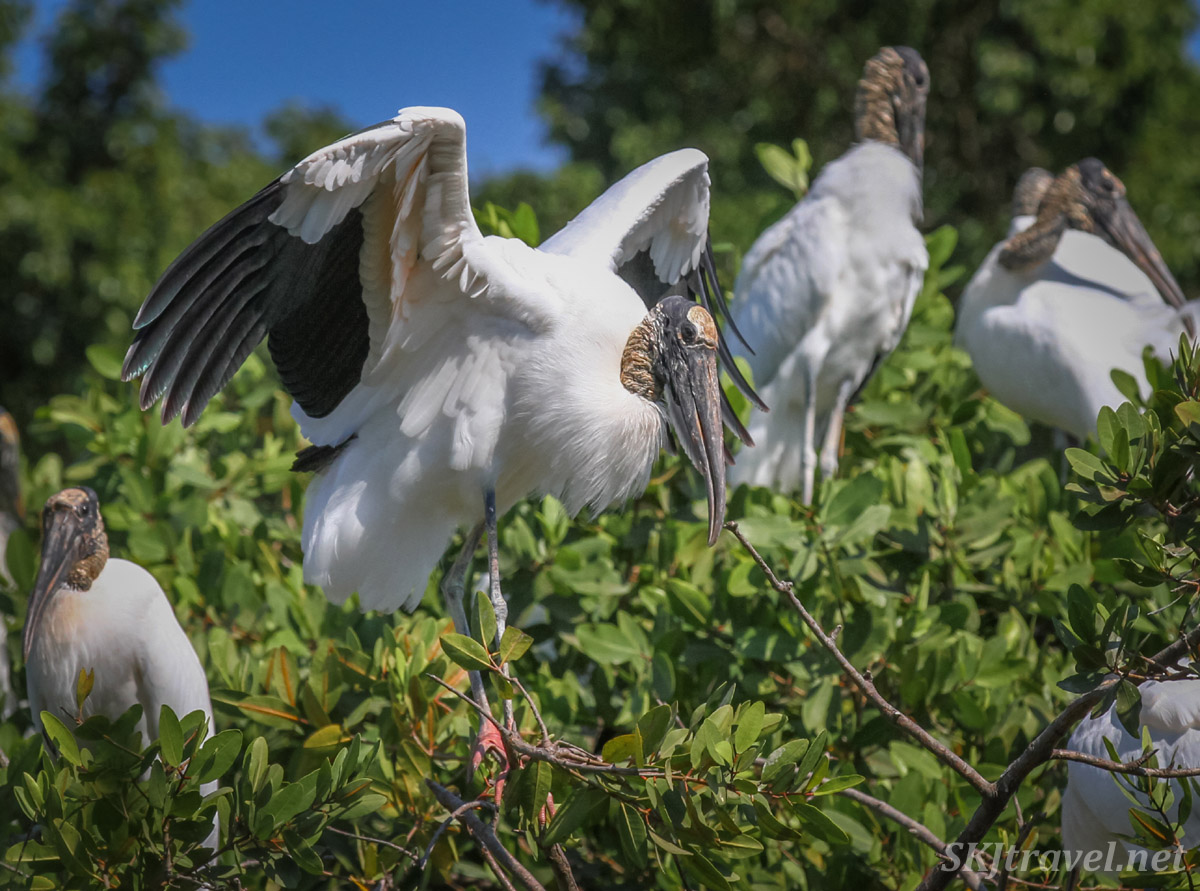 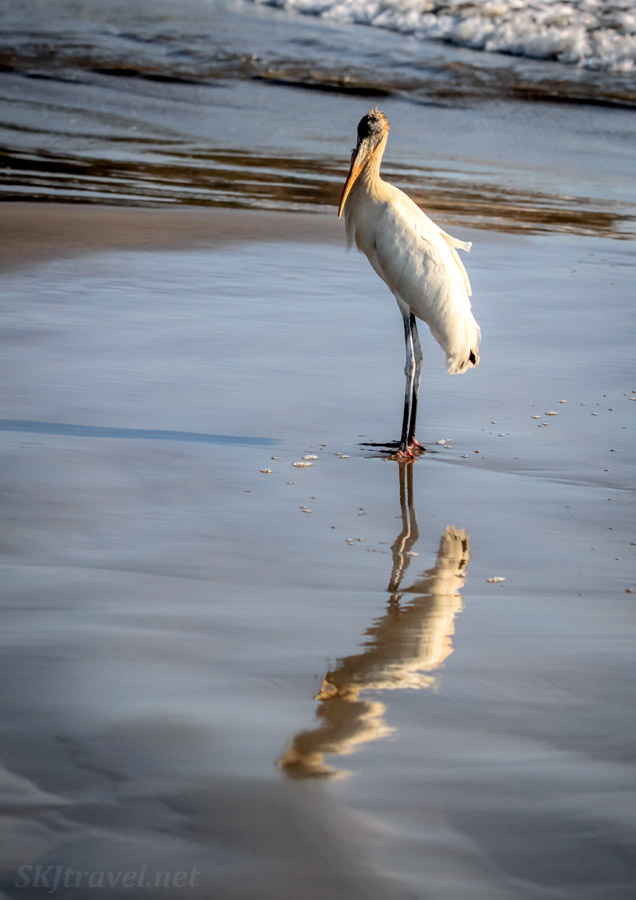 Whilst on the topic of new sights ... I've taken hundreds of photos of the crocodiles by now, but this is the first one showing a remarkable gradation of pastel colors inside the crocodile's mouth. And it's not just a one-off anomaly ... I took several shots of this open mouth, all came out the same. Who would have guessed the mouth of such a fearsome, vicious creature would be a sweet and gentle rainbow?! 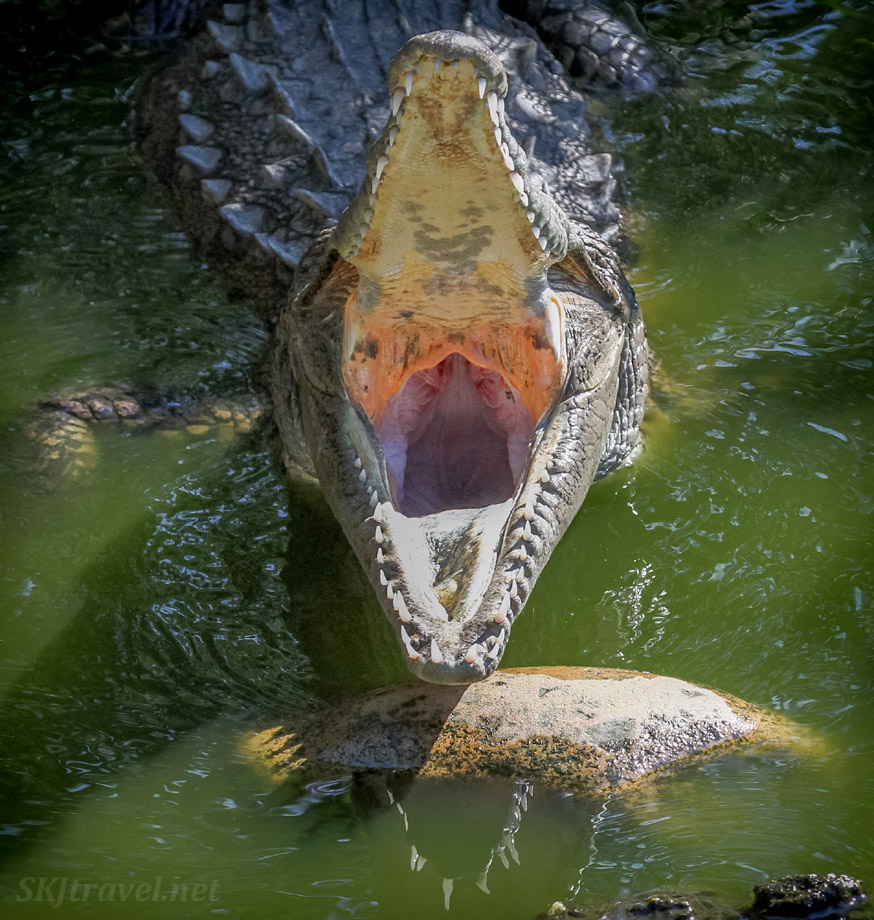 Now this guy, while not as large, is a better example of the terrifying perception we have of these ancient reptiles. 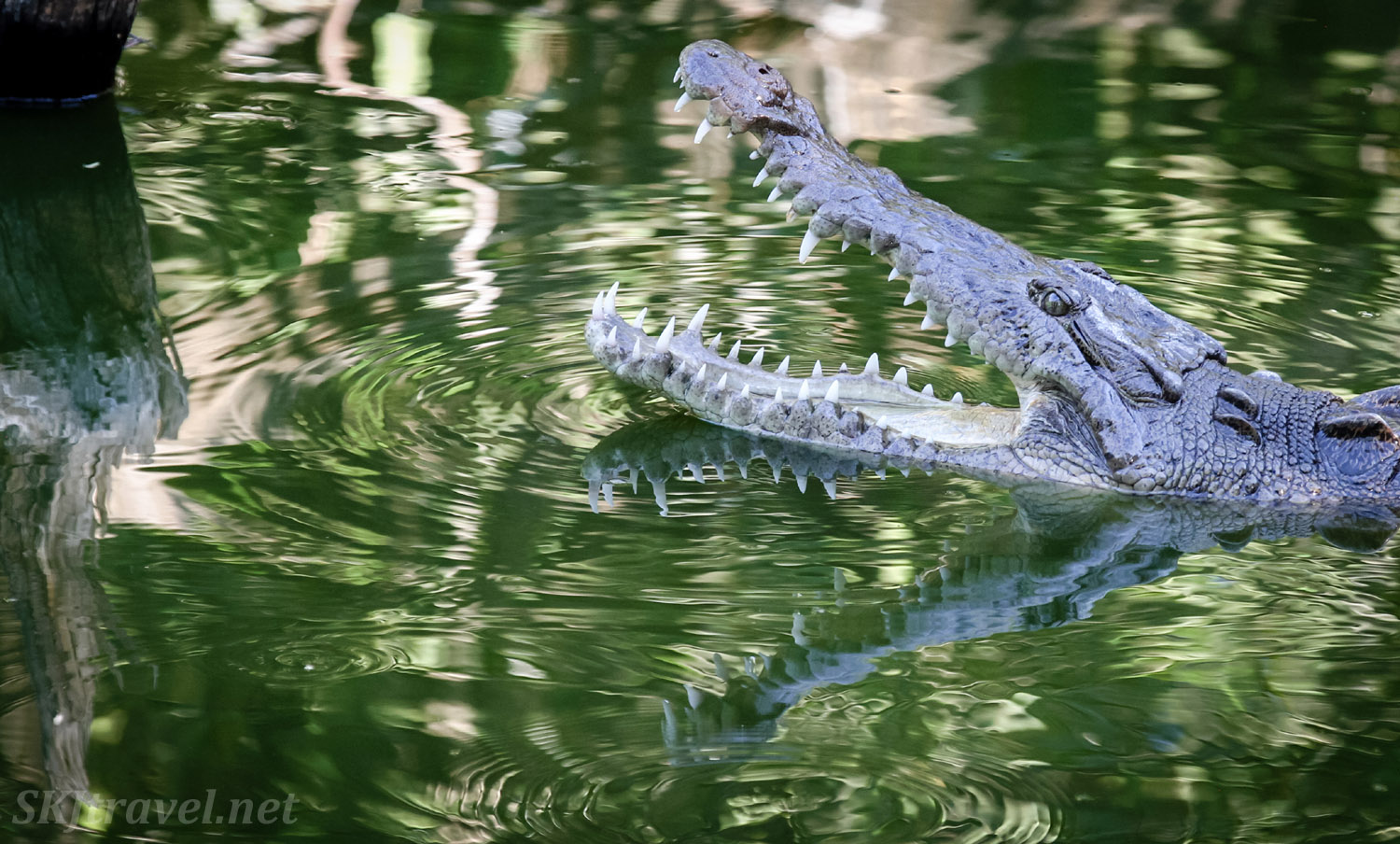 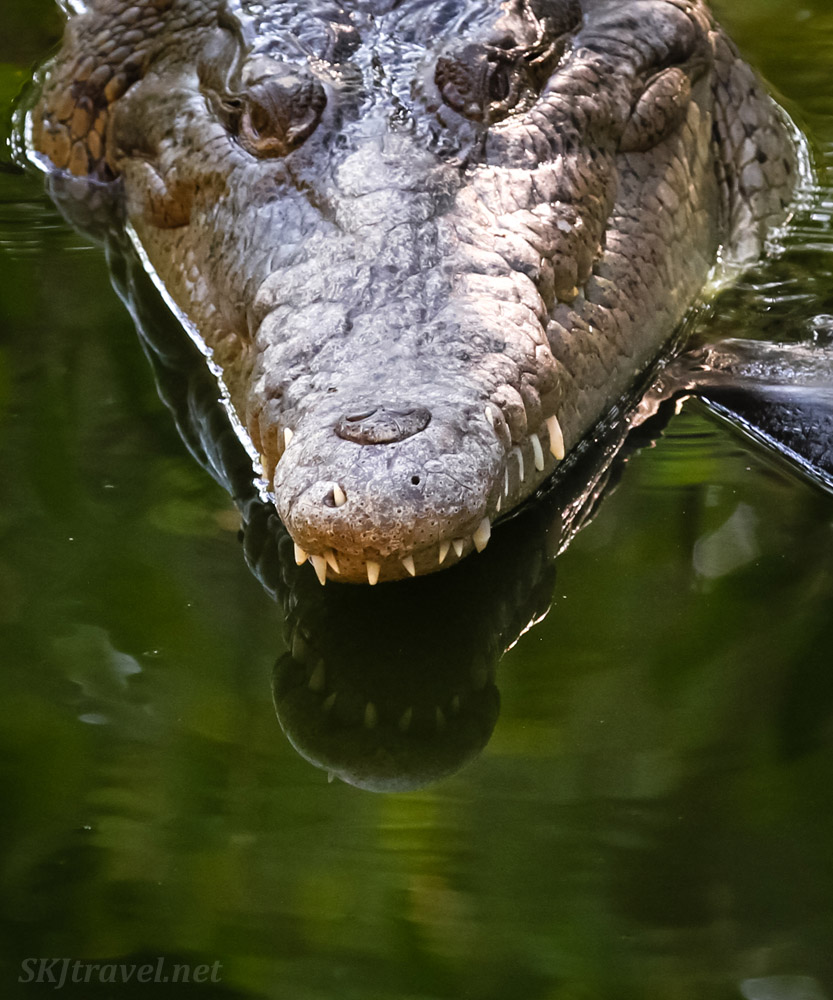 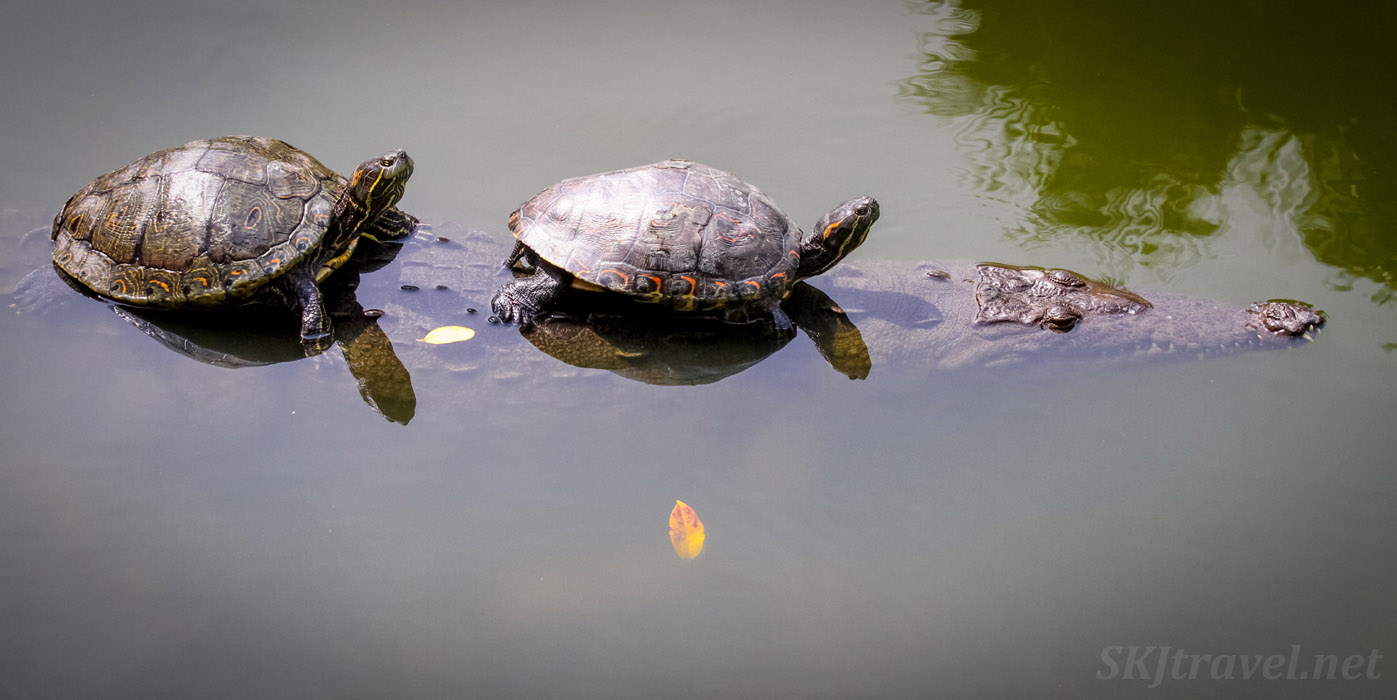 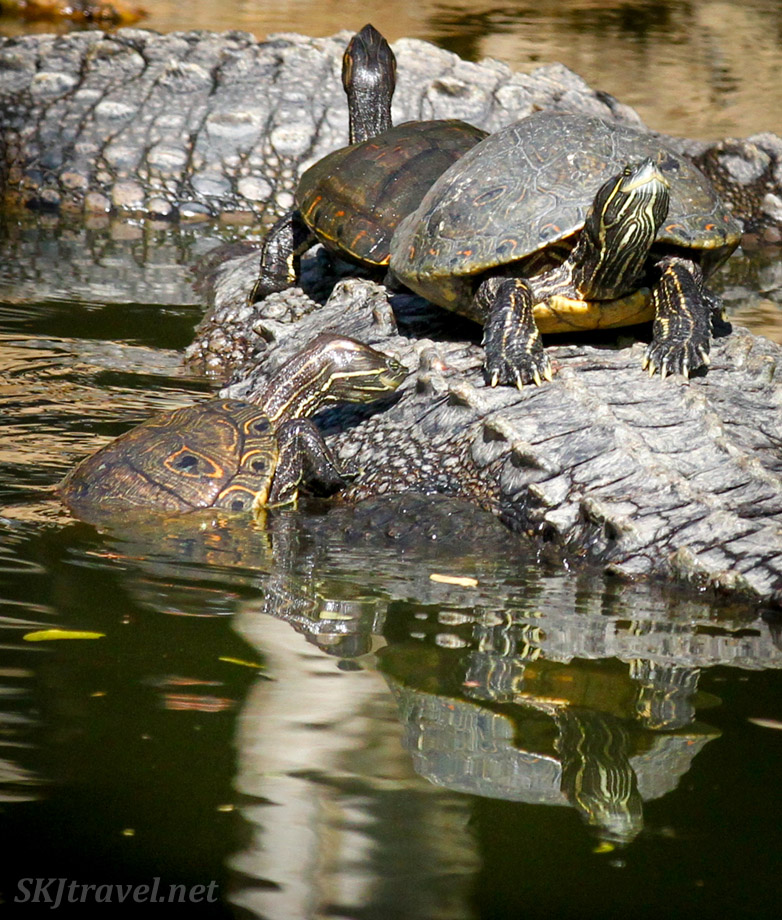 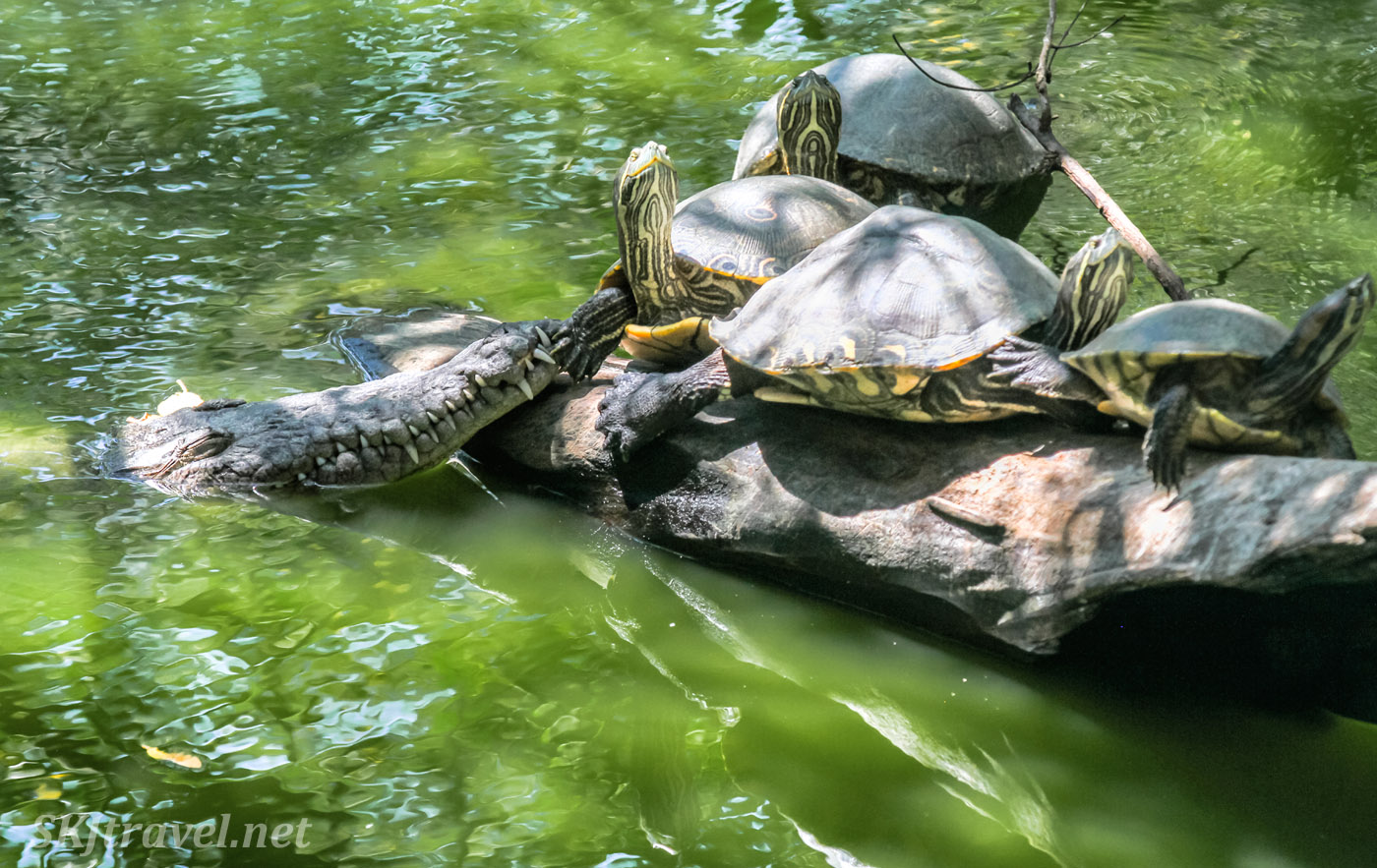 The iguanas continue to fascinate me. I also get a kick out of the other tourists around me who are visiting for the first time when they spot their first large male iguana. They get quite excited, and because I've taken so many pictures of iguanas already, I am often looking at something else. So a lot of them tap me and say, "Look, look, there's a big one right there!" as if I cannot see it. 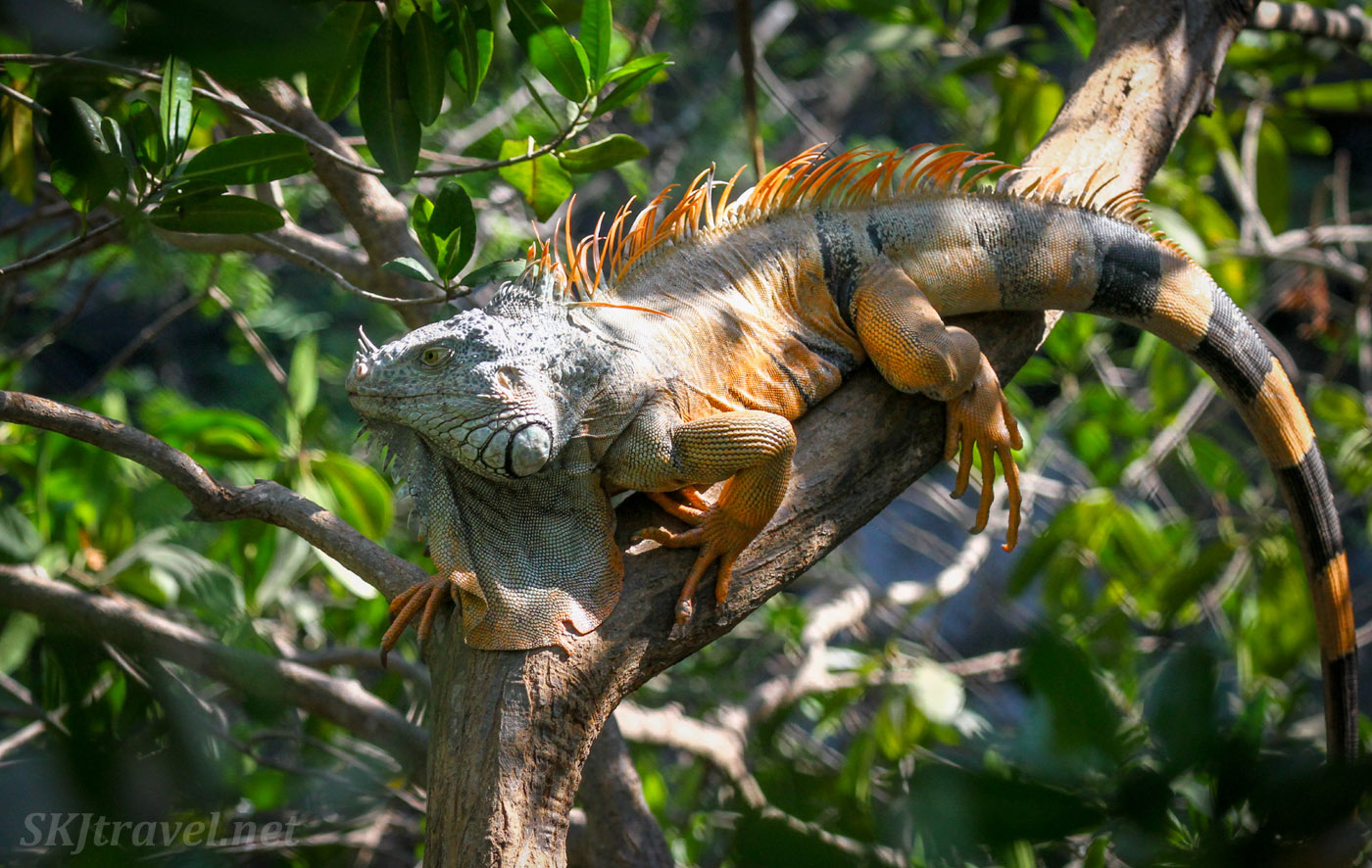 This guy looks so pensive, perhaps daydreaming of some pretty green female he's smitten over. 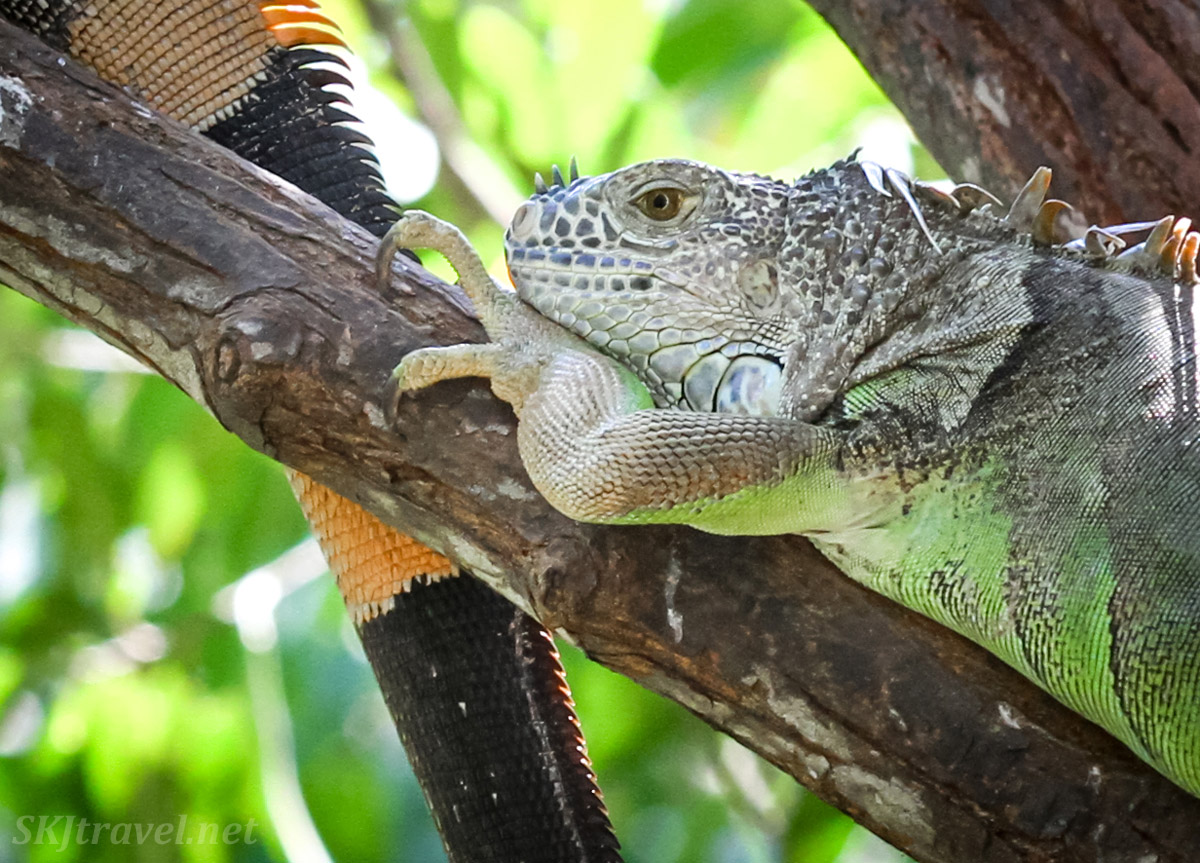 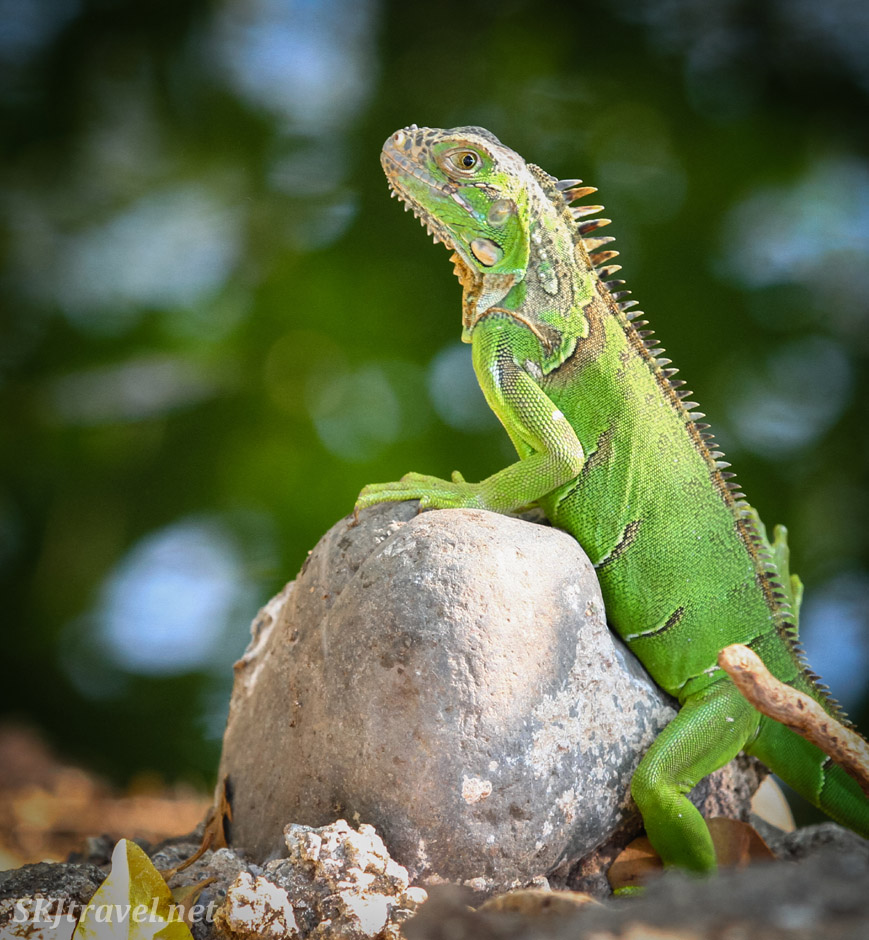 What I like about the first pic below is the shadow cast on the ground. The iguana in the second pic is looking pretty mean, maybe going to have a few words with somebody ..... 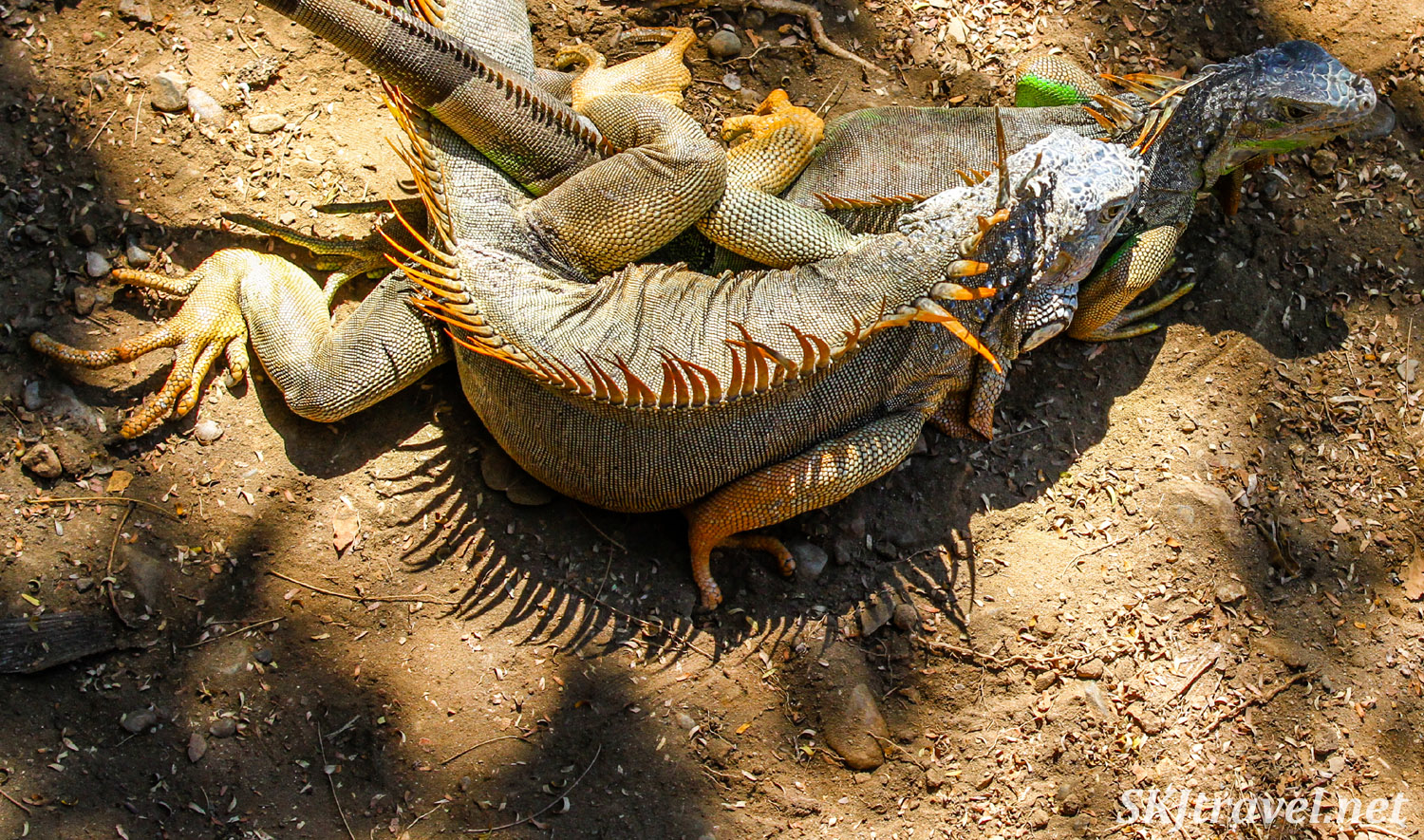 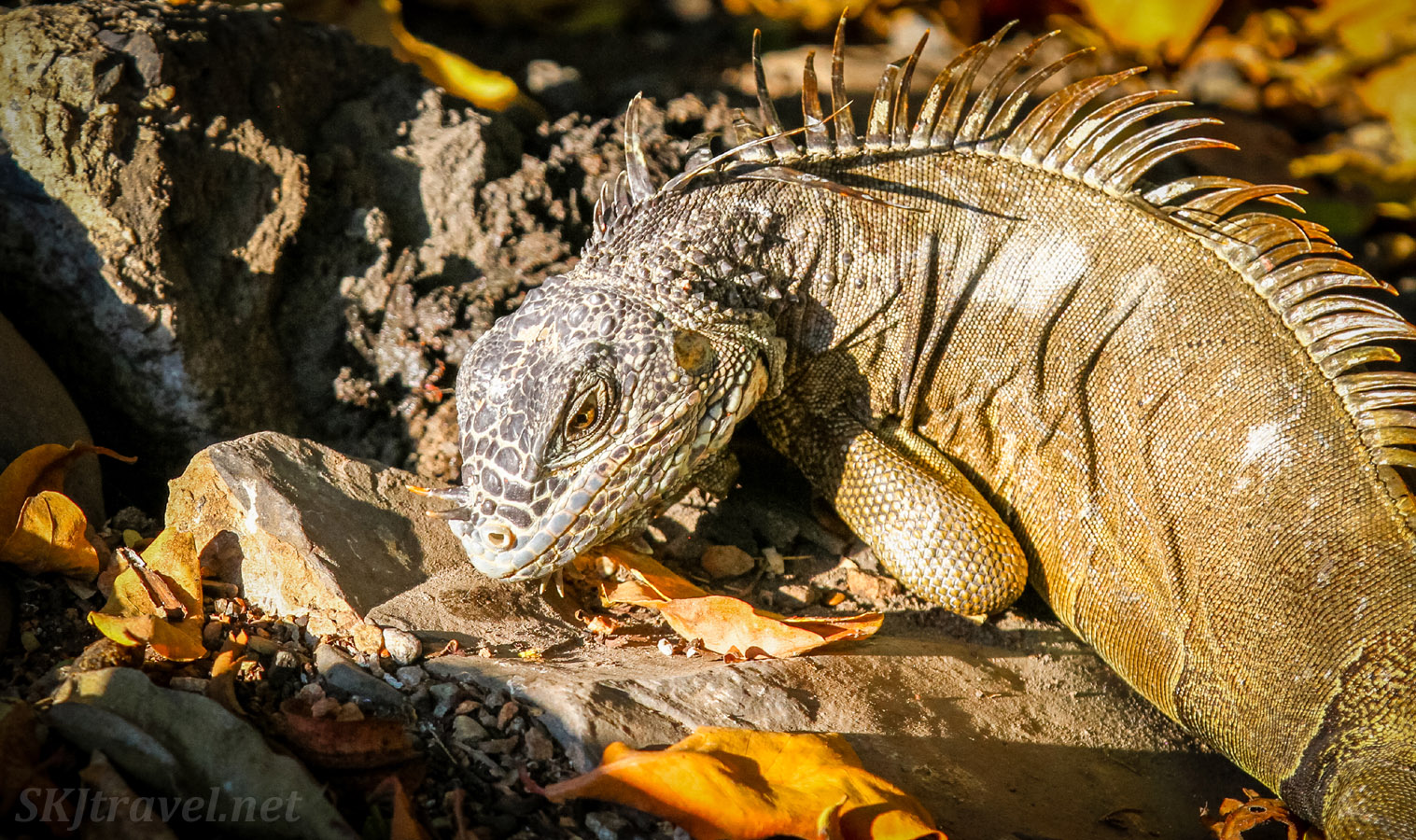 Here is a, umm, brown bird. I was pretty happy to get a shot of it tossing a fish up in the air before gulping it down. 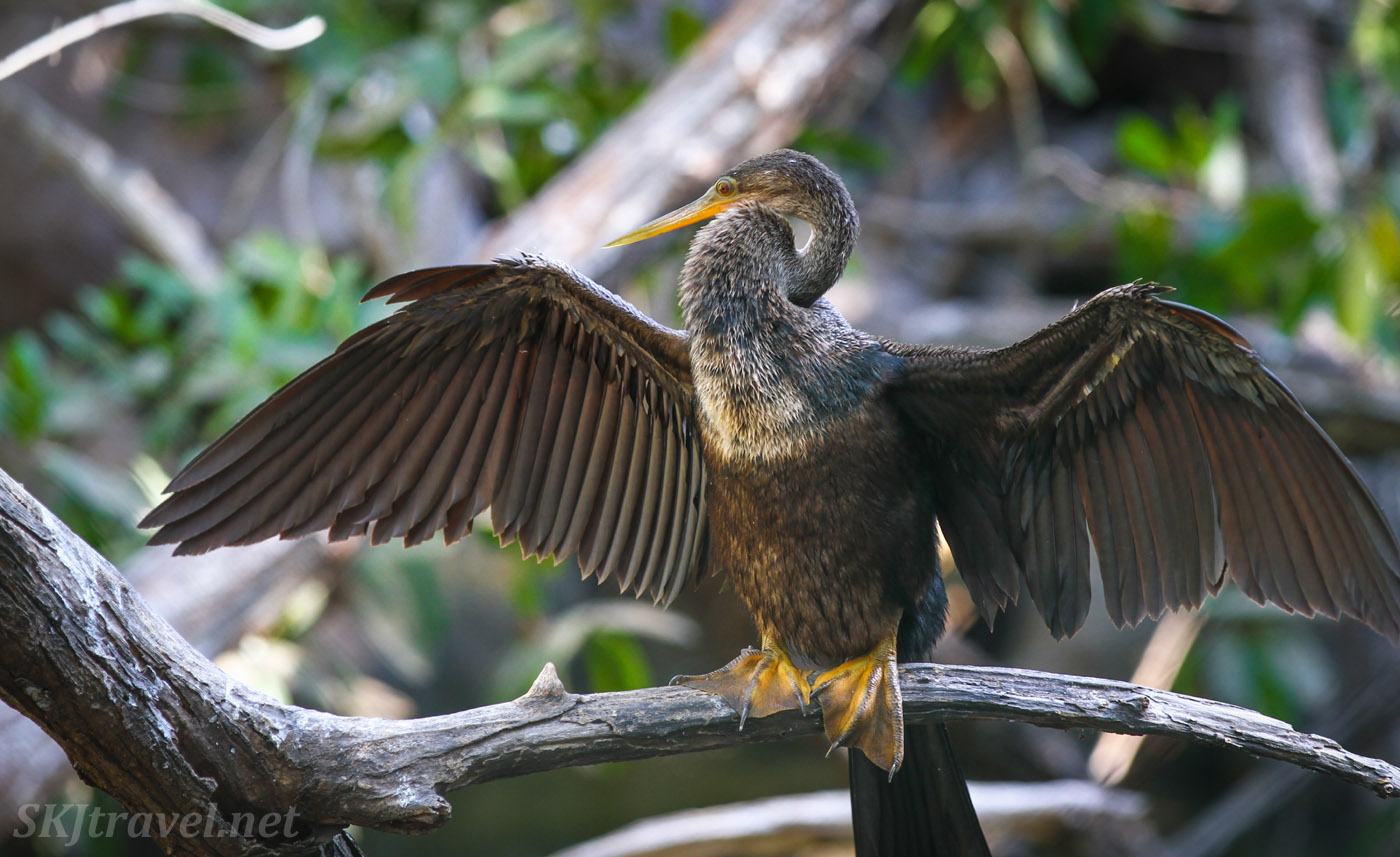 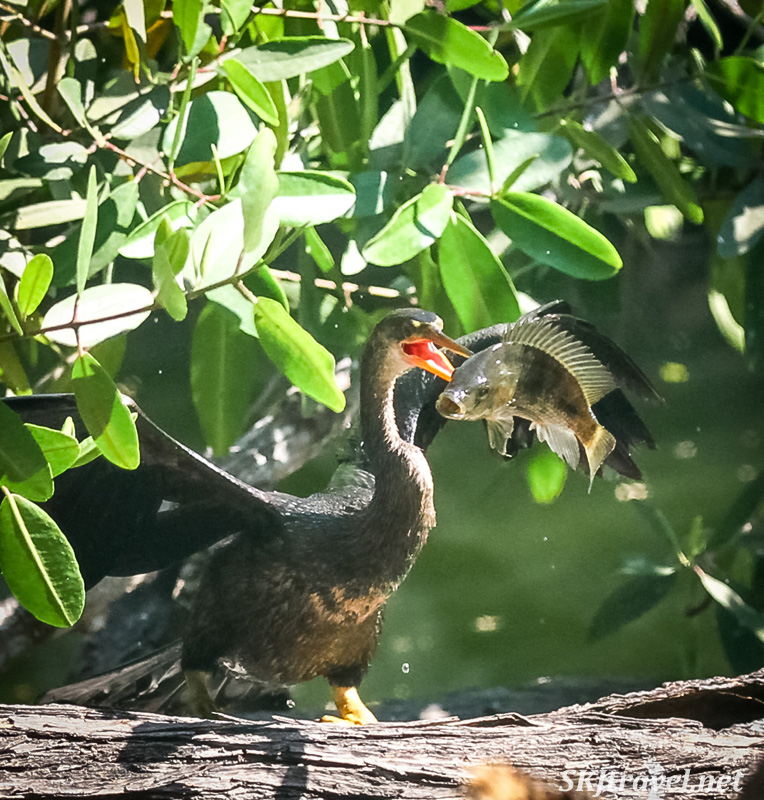 Even though they are common birds, I find the egrets to be elegant creatures with their pristine white feathers, and I enjoy watching them with their long toes and slender beaks. 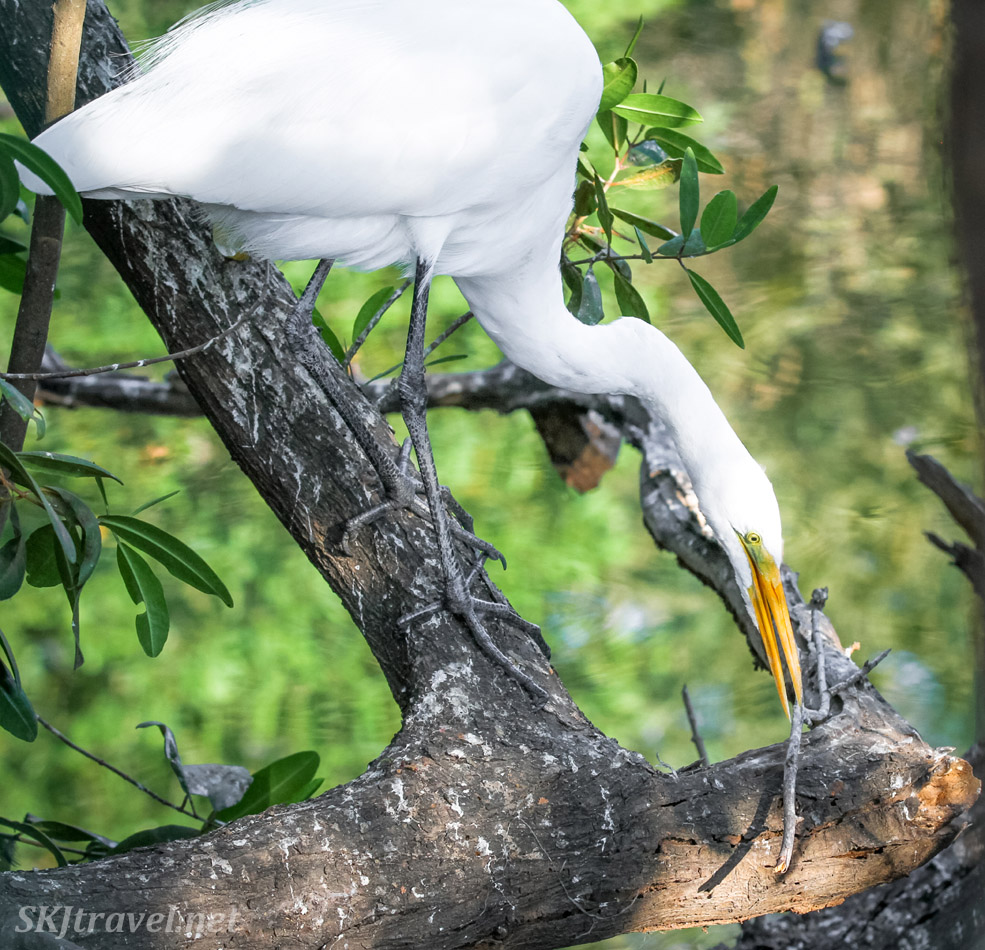 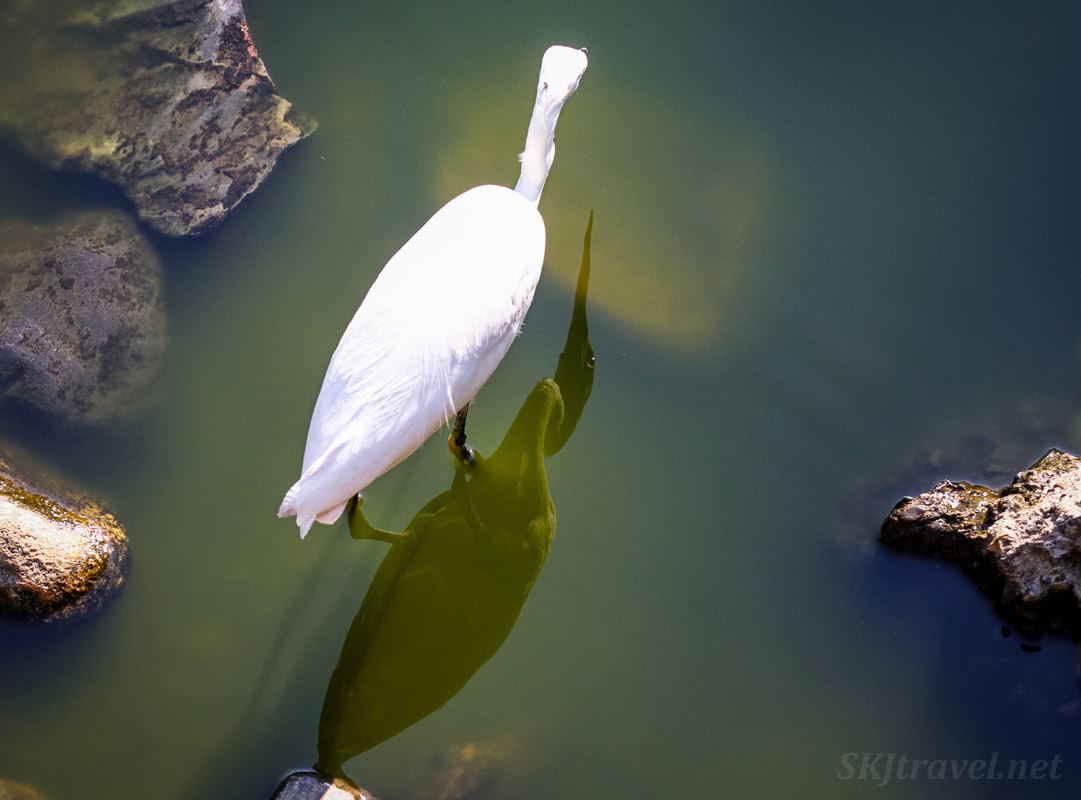 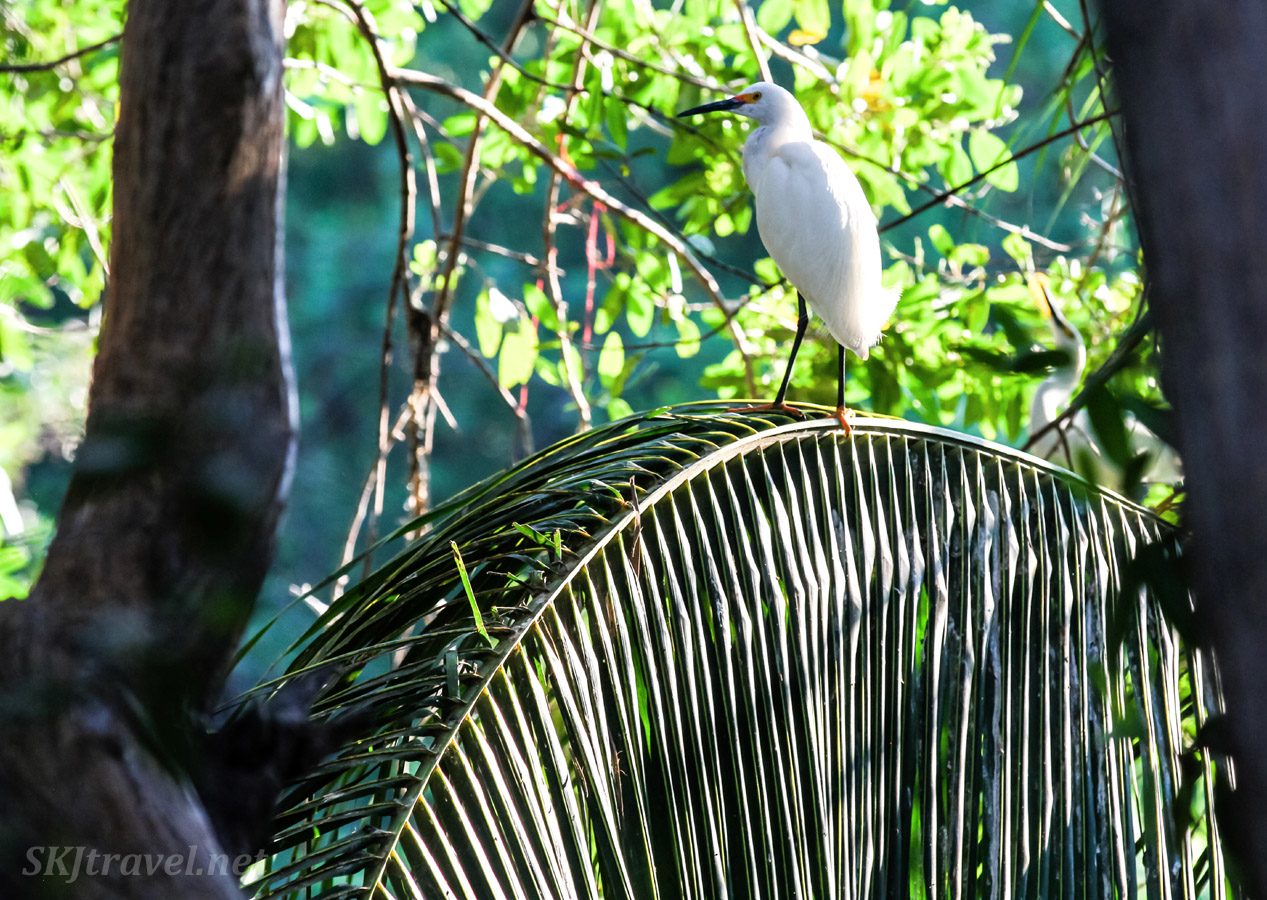 And last, but very far from least, a few photos of the roseate spoonbill birds. New visitors to the lagoon have the same response to the spoonbills as to the male iguanas, often poking me and pointing them out while I'm busy photographing something else. But it's OK; sometimes it's a tourist who has gotten me to swivel my head back to the birds out of politeness to their poking just in time to catch a new behavior. Like a spoonbill having a standoff with an iguana. The look on the iguana's face cracks me up -- he looks like he's saying to me, "Do you see what I have to put up with?" 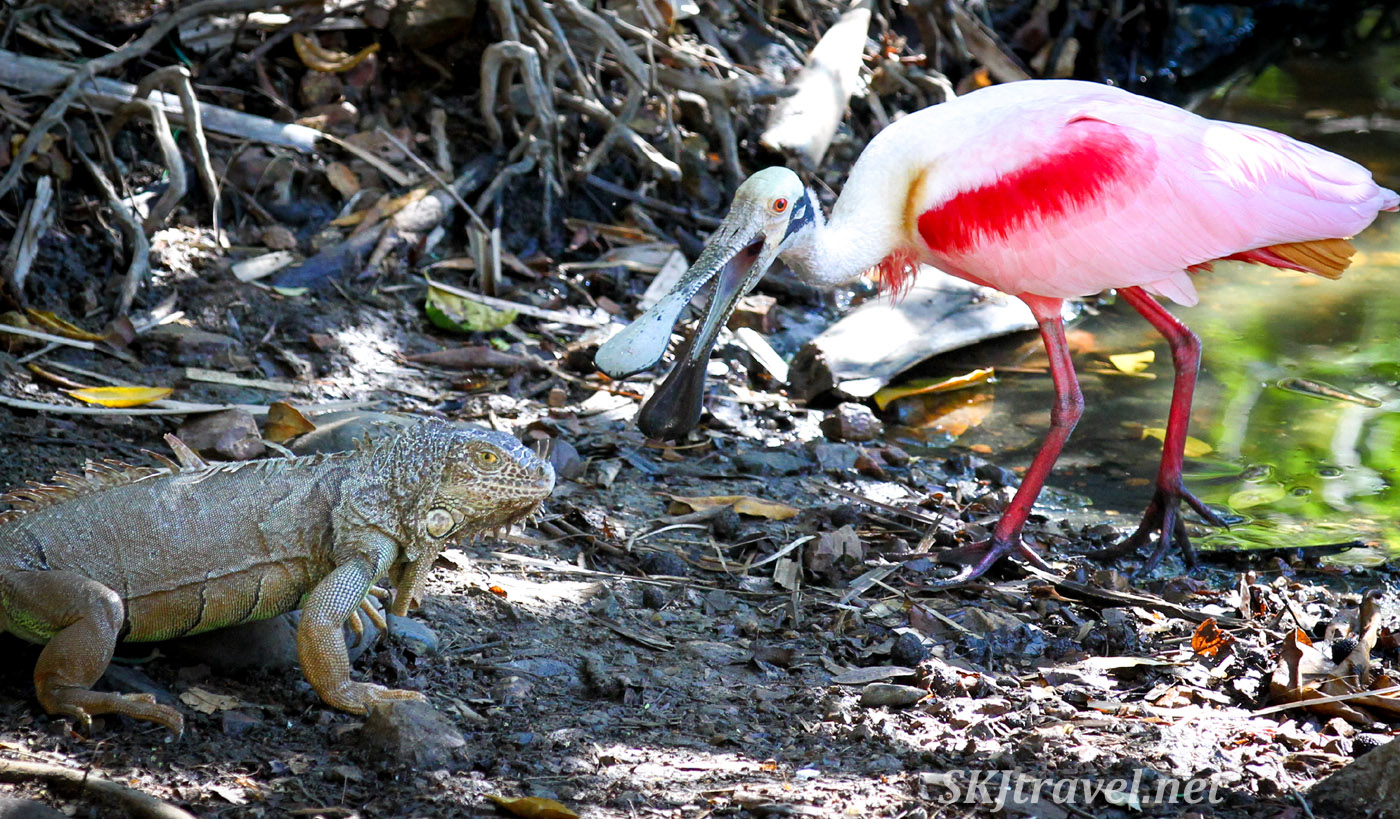 A spoonbill gathering sticks for its nest. 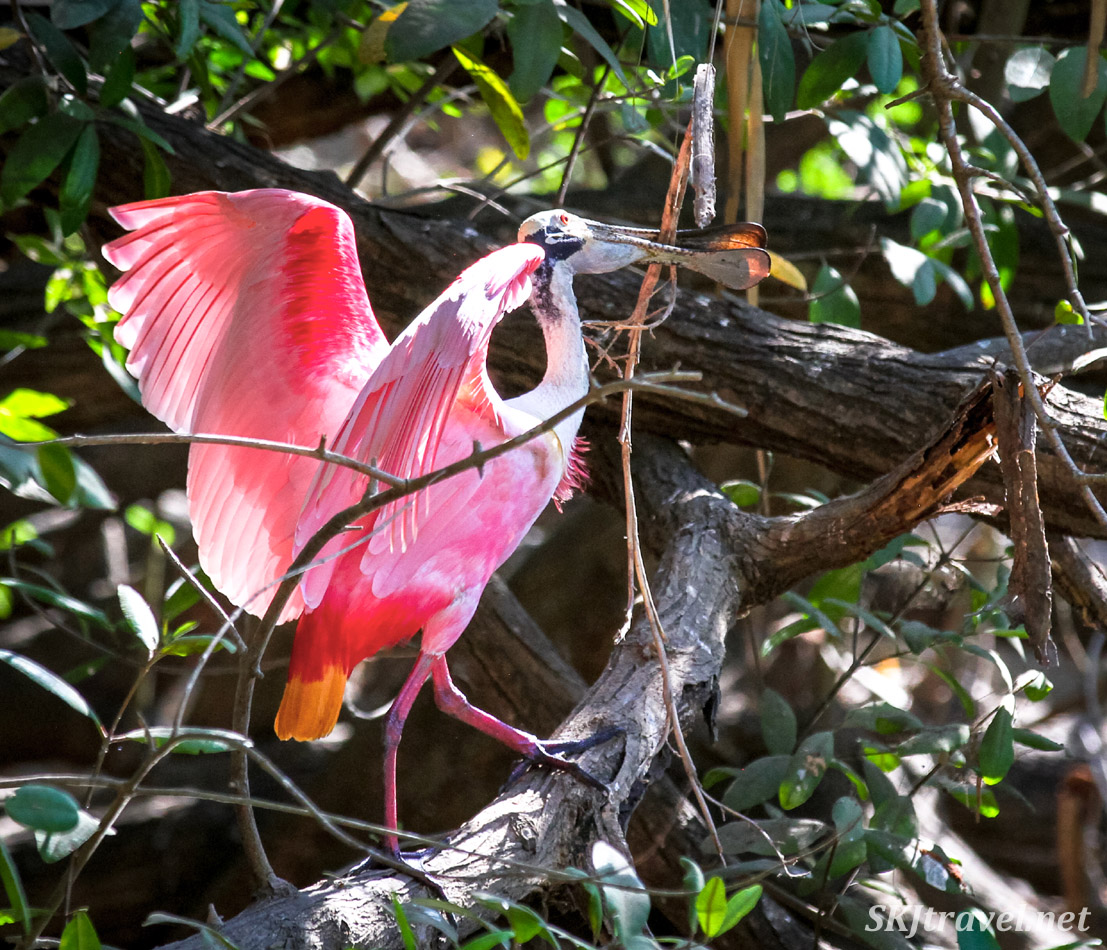 And a classic spoonbill pose, preening his feathers. Or her feathers ... unlike some birds, the males and females have the same coloring. 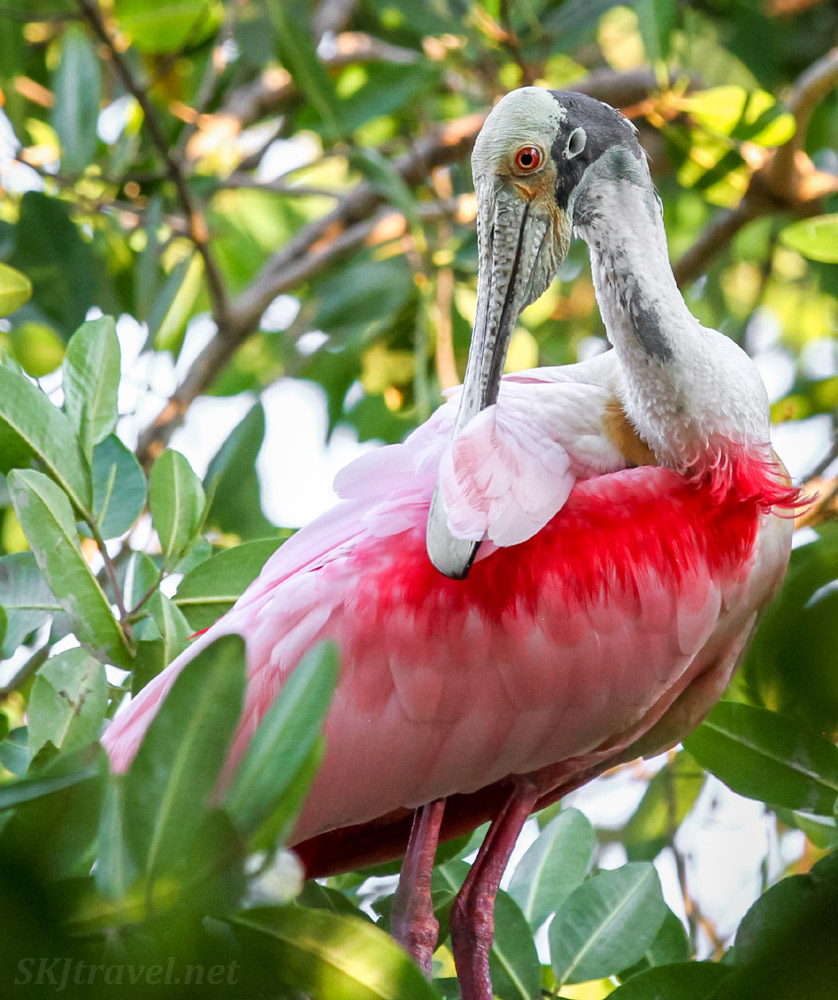 Perhaps, dear reader, you are beginning to feel like this little lagoon belongs to you, too, by now! Hope you enjoyed another round of photos with these beautiful creatures.