Can you Candombe? Parading the Streets of San Telmo, Buenos Aires

It was our last day in Buenos Aires before flying to Ushuaia to begin our Antarctic cruise. We hadn't planned anything too specific except to go back to the San Telmo neighborhood to look in their large antique malls and markets, as we are fans of antiques and that is often the kind of souvenir we will bring home from one of our travels. (and yes, we did buy some things) As late afternoon arrived, we started thinking about getting back to our hotel and finding some malbec and dinner, ultimately having a quiet night in preparing for the next leg of our trip. But our plan for the evening ahead was derailed, and ended up like this: 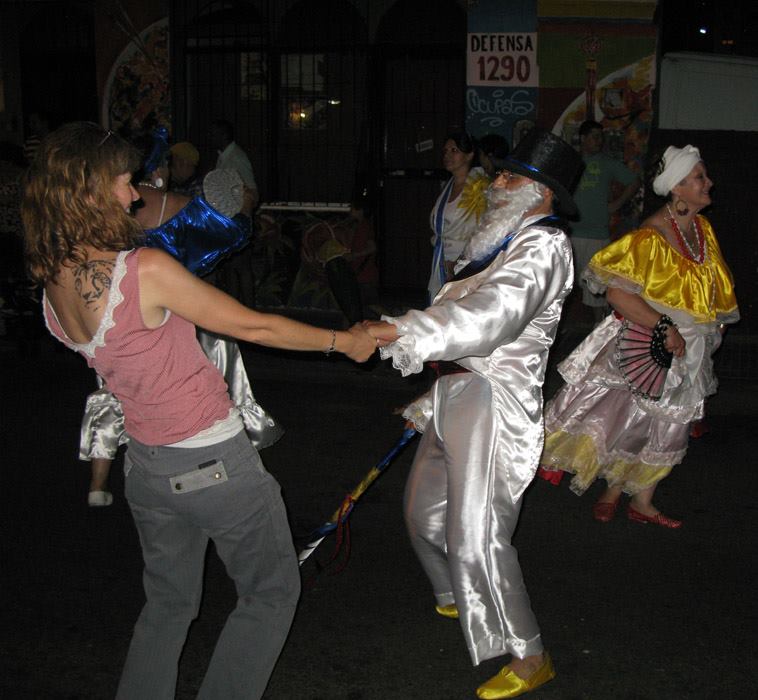 ... with me dancing with an old geezer. There are few things more exhilarating in travel than happening upon a festival or parade, that you didn't know anything about, purely by chance. We were walking down one of the main avenues and suddenly we found it blocked off and tons of people milling around. Not only just "people" people, but ones dressed in elaborate costumes, holding up banners and strapping drums around their necks. So we decided to stick around and see what it was about. 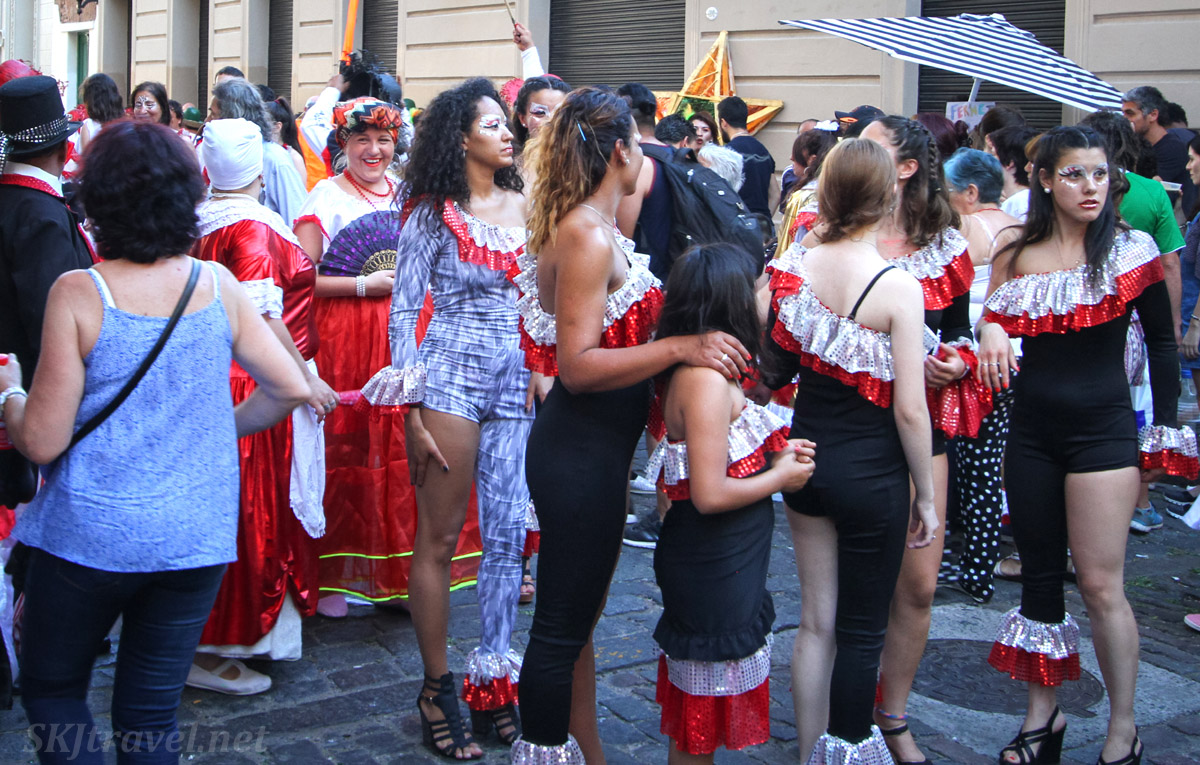 We tried to ask one of the police officers standing at the barricade what was going on. We understood him to say it was "the day of the drums." And he said it like we were one cookie short of a full jar, like, "how on earth could you not know that?"

Well! We ended up spending the entire rest of the evening until the parade ended, at about 10:00 pm and a mile away, through the streets of San Telmo. Like many other viewers, we gradually followed the paraders down the street, so in the end, we walked the whole route ourselves. The parade was comprised of some number (I don't know how many, I didn't count) of small drumming groups accompanied by their own dancers. Each unit would start marching from the launch point maybe 15 minutes or so apart from one another, stopping now and then along the route for the dancers to dance and let the groups ahead of them get further along. Allow me to say that a mile doesn't sound that long, but the way these girls were dancing, and on cobblestone streets, often in ridiculously high heels, for several hours (that's how slowly they were "marching"), it would be pretty exhausting.

Like ..... my ankels would be exhausted dancing in those shoes for over an hour! 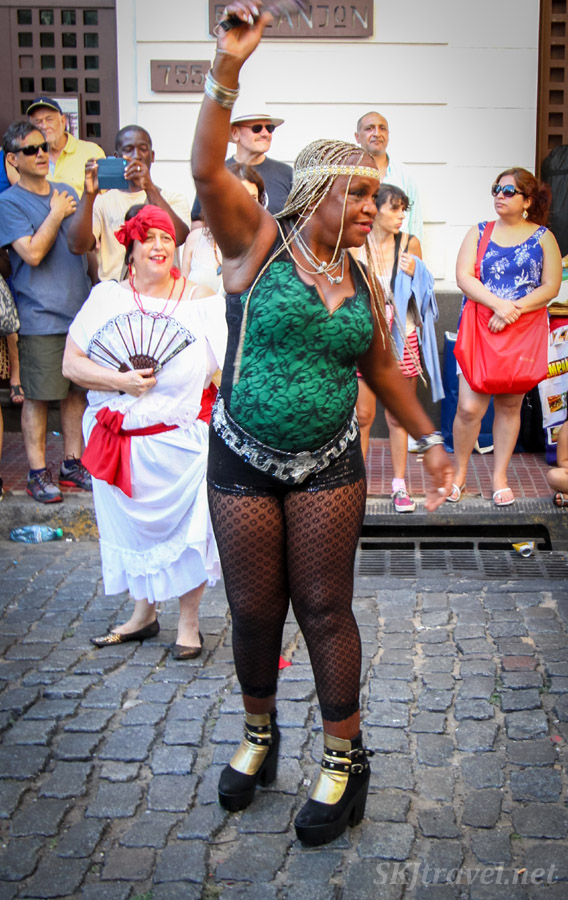 These girls have more sensible shoes, but my knees would sure be tired the way they're dancing all mysterious-like and slinky! 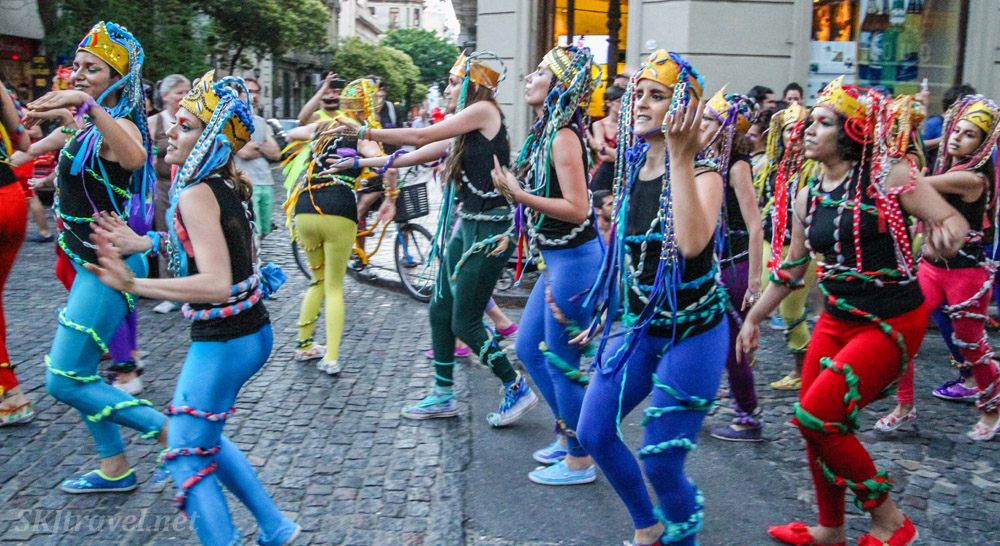 So we spent the whole evening, finding dinner at a small corner cafe along the parade route, watching this spectacle about which we knew absolutely nothing. Neither of us speaks Spanish well enough to understand any detailed answers were we to ask a fellow attendee about it. There were some other gringos, but they might not have known more than we. I figured that's what Google is for ... I'd learn about it after we got home and just enjoy the spectacle this evening. But I will go ahead and explain it to you as we go along through this little photo essay of the San Telmo Candombe. It was difficult to find any useful info online, actually; by far the best source of information I could find was this article by Galilee Abdullah on www.wfmt.com. So everything in quotes from here on has been copied and pasted (and sometimes slightly reworded) from that article. I'm here to explain my pics, not write my own research article. :-)

"Uruguay hosts the world’s longest Carnaval, which would not be complete without candombe, an Afro-Uruguayan performance tradition that is centuries old and still celebrated today. Candombe is rooted in the culture of enslaved peoples who were brought to Uruguay from Africa during the early 1800s. During the 1840s, slavery was abolished in Uruguay, at the same time the region experienced an influx of European immigrants. The term candombe means “pertaining to blacks” in Kikongo, a Bantu language." Though Uruguay is the candombe's homeland, it has also now spread to some cities in Argentina ... lucky us!

"The drums of candombe are three barrel-shaped drums called tamboriles. They are made of wood with an animal skin head, and are tuned in front of a fire to absorb the moisture from inside the body of the drums. The smallest drum is the chico, the medium sized drum is the repique, and the largest drum is the piano. The larger the drum, the lower the pitch, and the larger the drum, the larger the stick used to play it. The tamboriles are played “mano y palo,” with one bare hand and a stick in the other. The drum stick is generally used to play the underlying groove of candombe music, the clave rhythm. Much like the traditions of candombe, the clave is one that has been spread to the Latin American diaspora from peoples originally from sub-Saharan Africa." 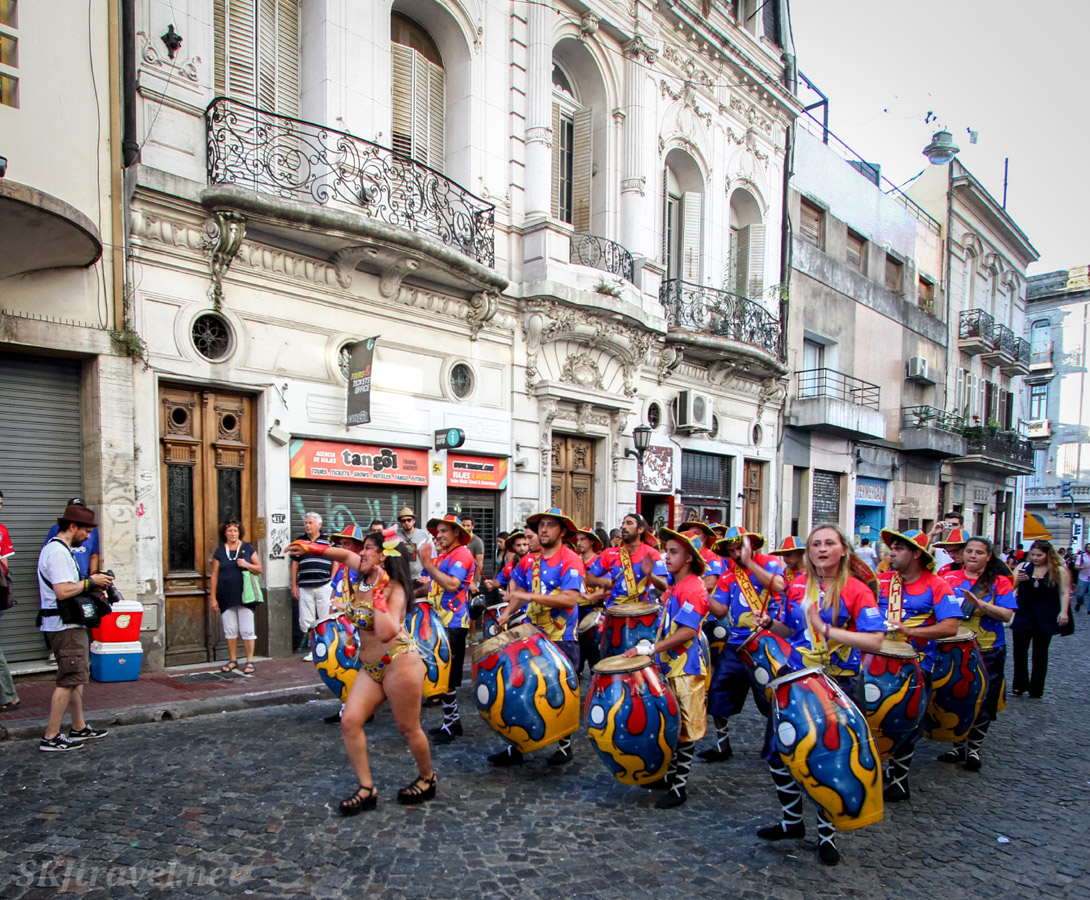 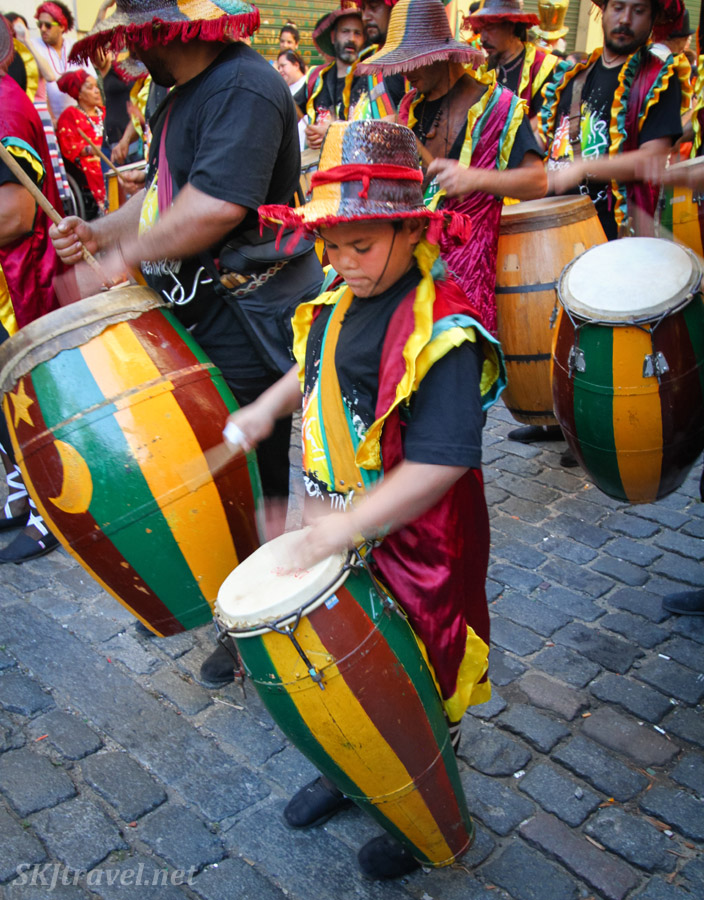 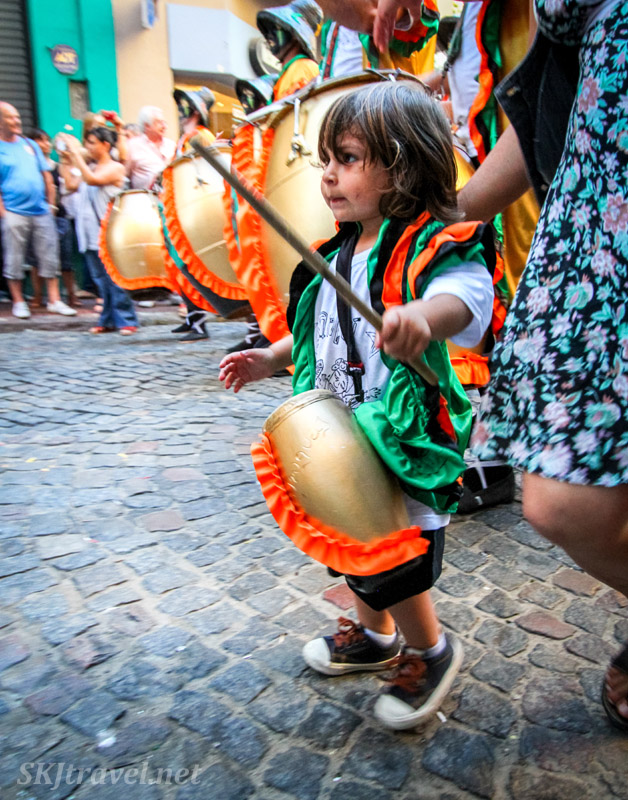 "A cuerda, which is a group of at least three drummers, must have at least one performer of each of the three tamboriles. But during Carnaval upwards of 70 performers can be seen playing each type of drum. These large groups come together to form neighborhood comparsas. Comparsas are established groups of drummers that audition and practice throughout the year in preparation for Carnaval, when the comparsas take to the streets dressed in matching costumes." 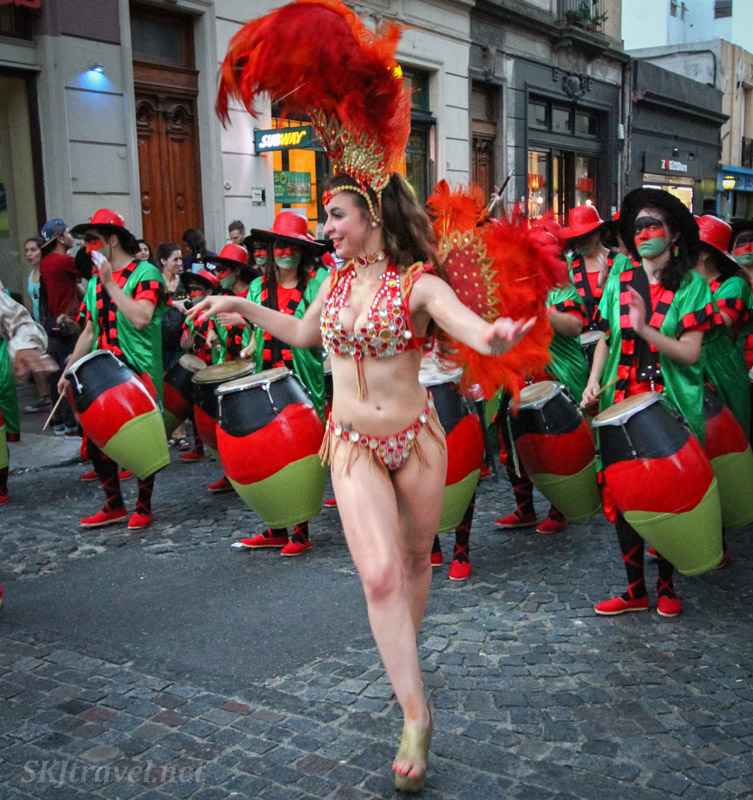 "Comparsas are led by someone carrying the estandarte, or standard, the banner that shows the name of the comparsa. They are followed by people carrying banderas – large, colorful flags." (and they are *really* large!) 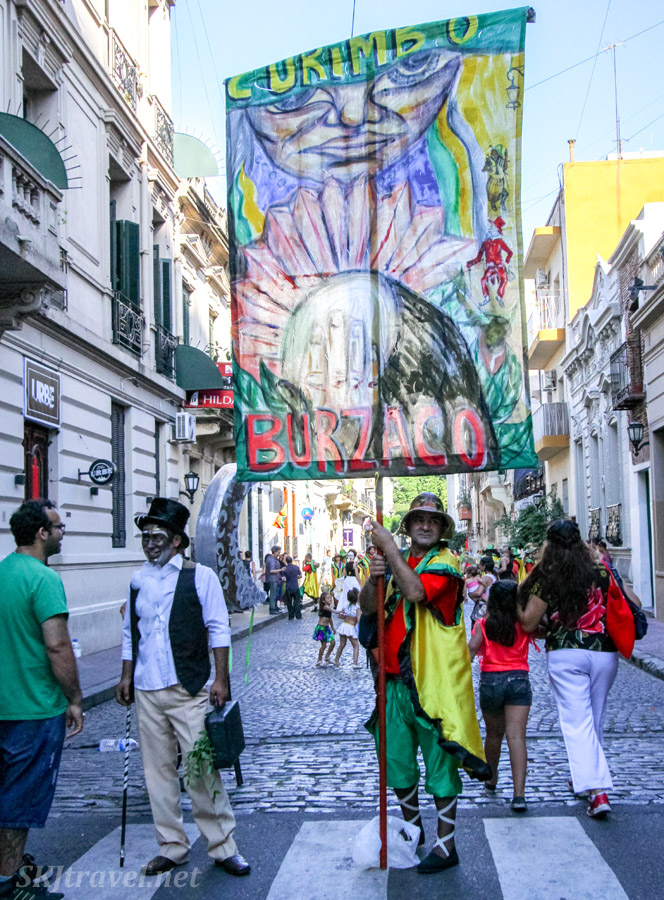 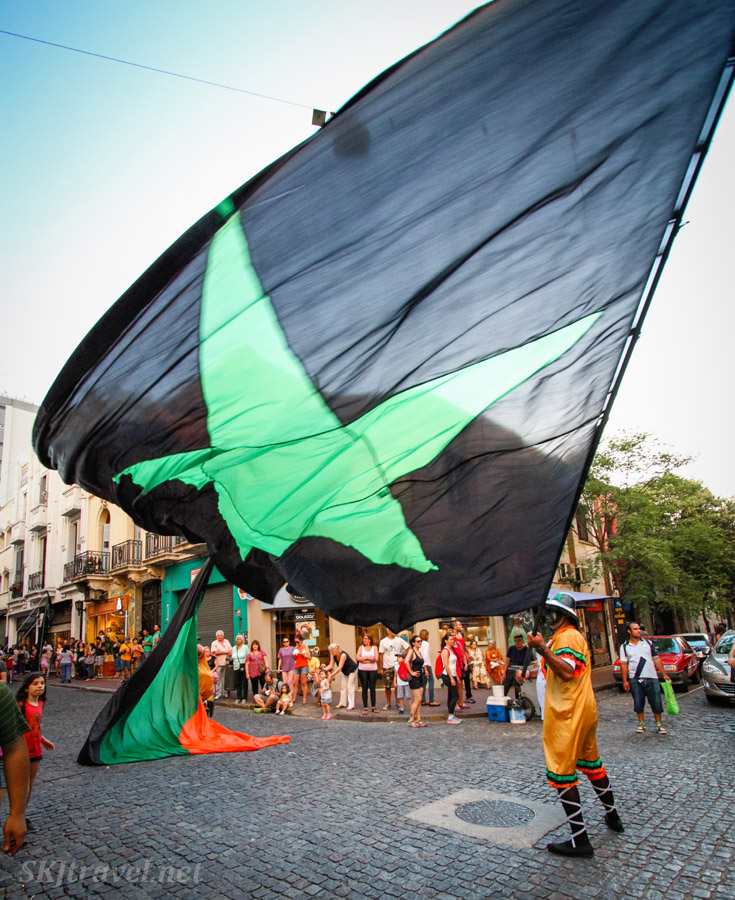 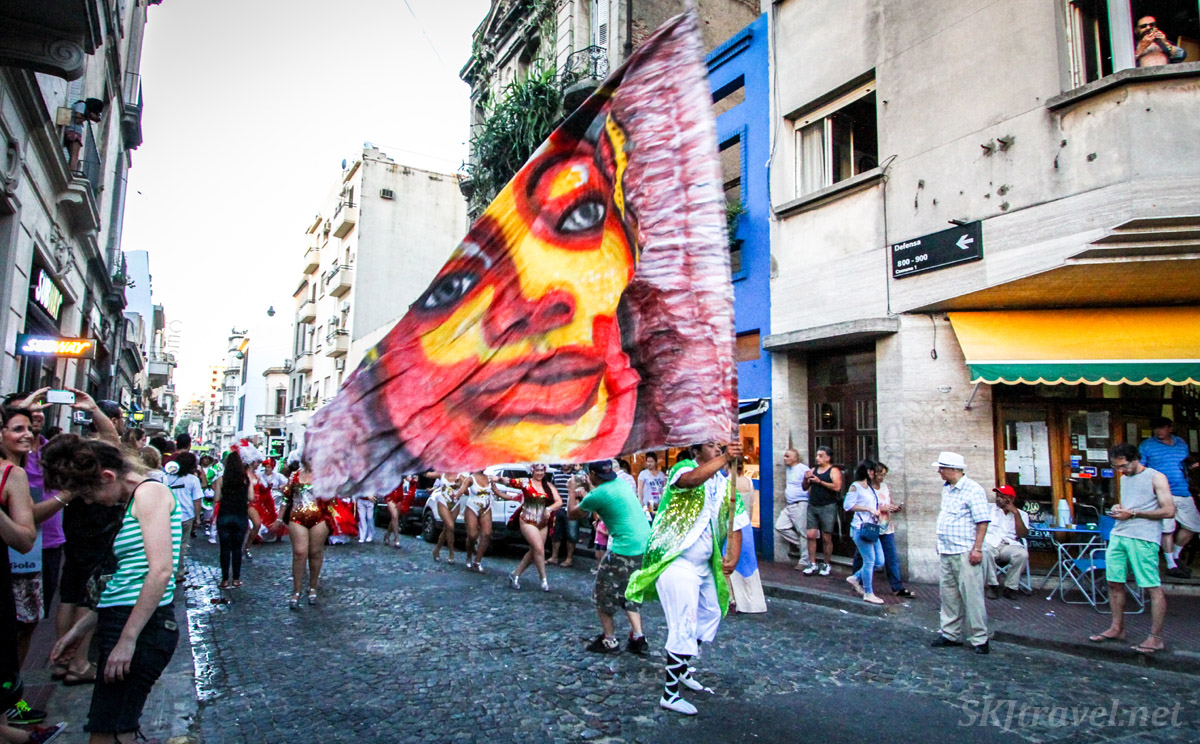 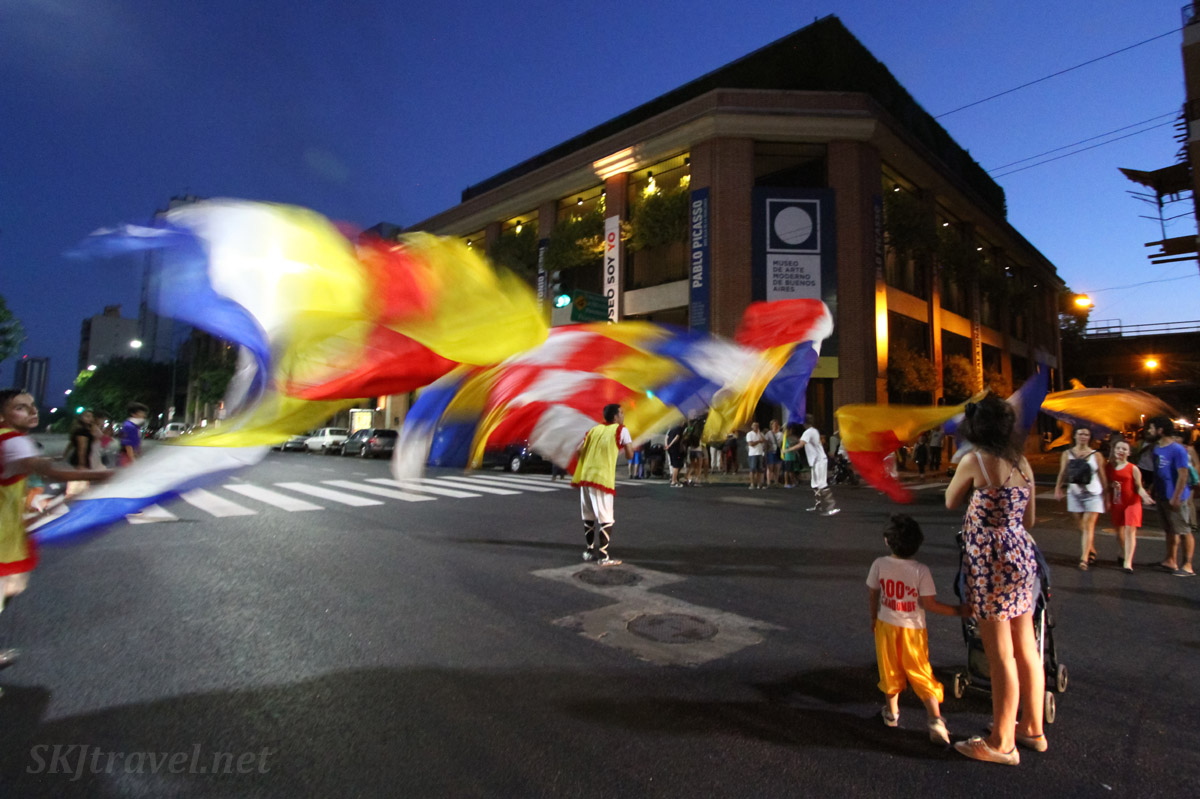 "They are followed by others carrying trofeos, or trophies, which are symbolic objects that are rooted in the early spiritual traditions of candombe. These symbols are typically two stars and a half-moon, each of which are carried by a separate person." 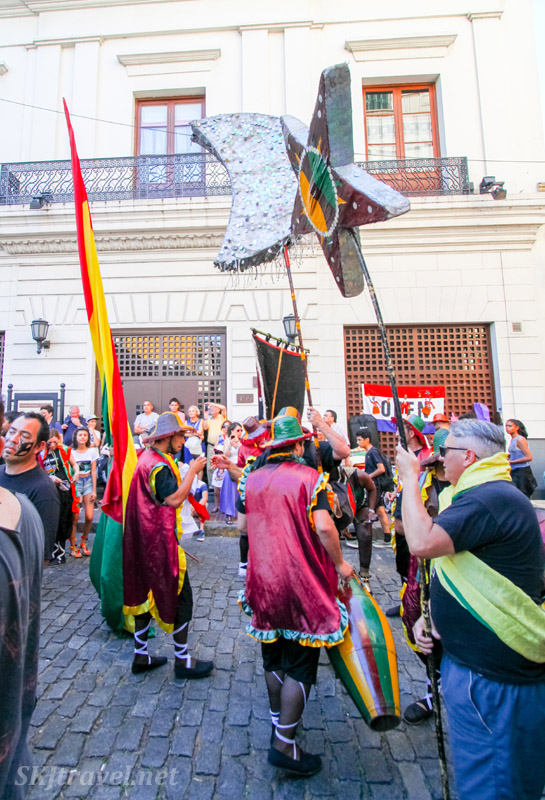 "The comparsas are followed by the cuerpo de baile, or body of dancers. These dancers are dressed as archetypal characters, including the Mama Vieja, Gramillero, and Escobero. The Mama Vieja, which means old mother in Spanish, is an older woman who typically carries a parasol and fan. She was the matron in the homes of the elite during colonial times and dances along with the Gramillero. The Gramillero is an old medicine man with healing powers, wearing a beard and holding a cane. While the Mama Vieja dances gracefully, fanning herself, the Gramillero wobbles, bent over his cane." The Gramilleros didn't always have the beards, and many of them carried medicine bags. But they always had canes. 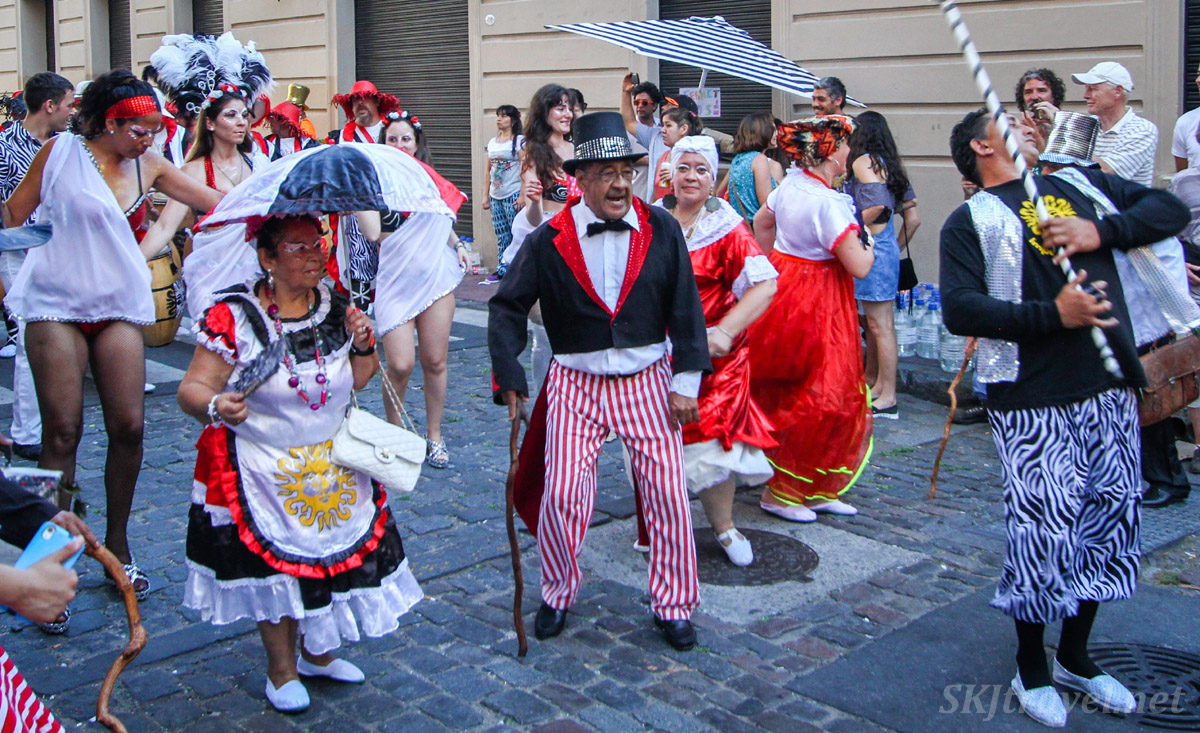 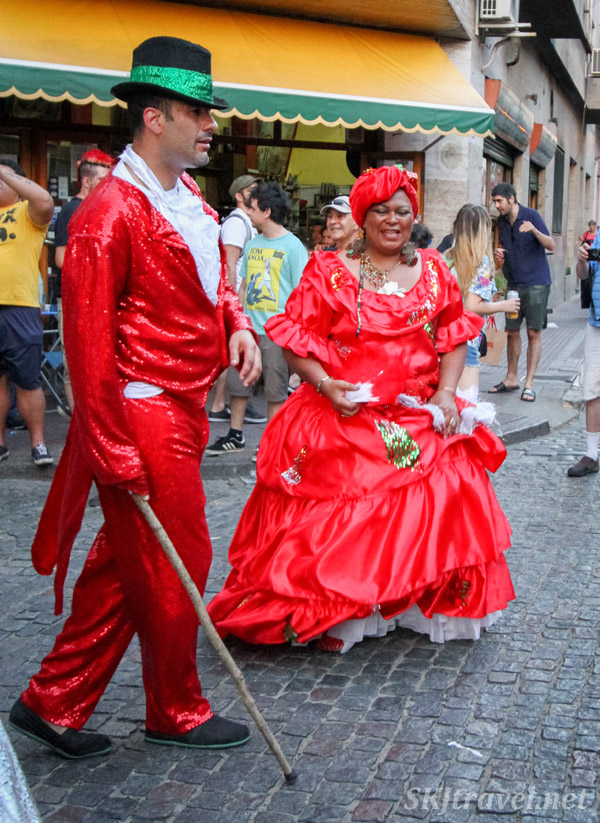 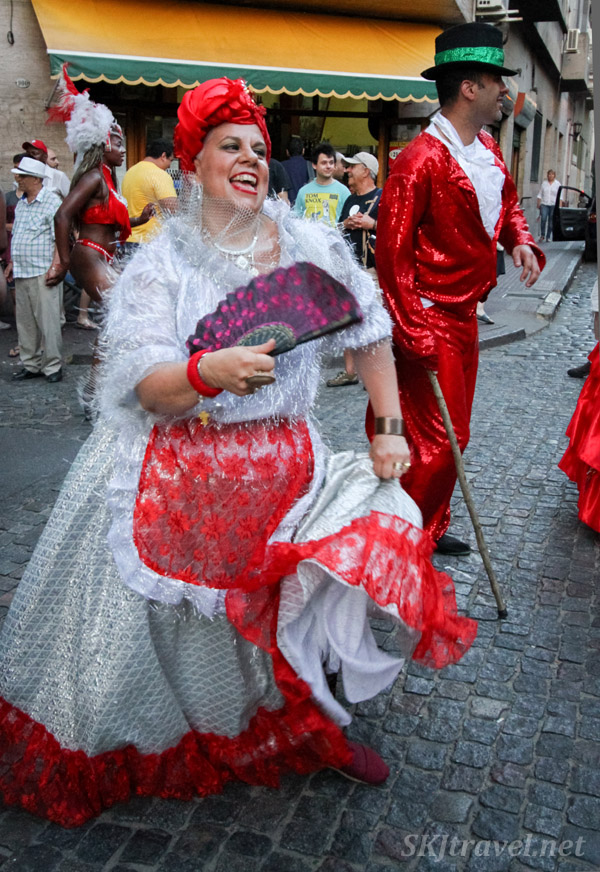 I loved this Mama Vieja, she danced with abandon like she was a princess at a ball. 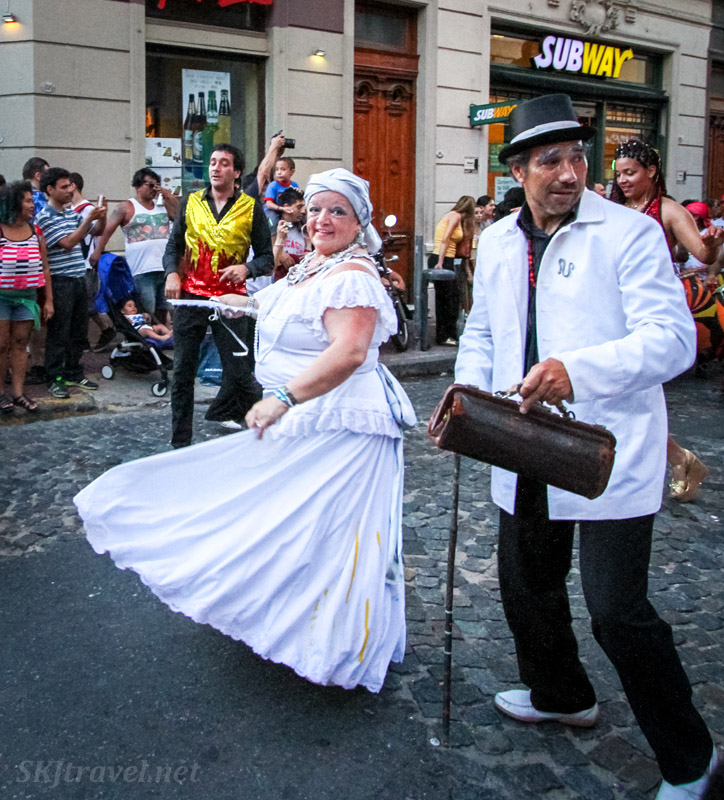 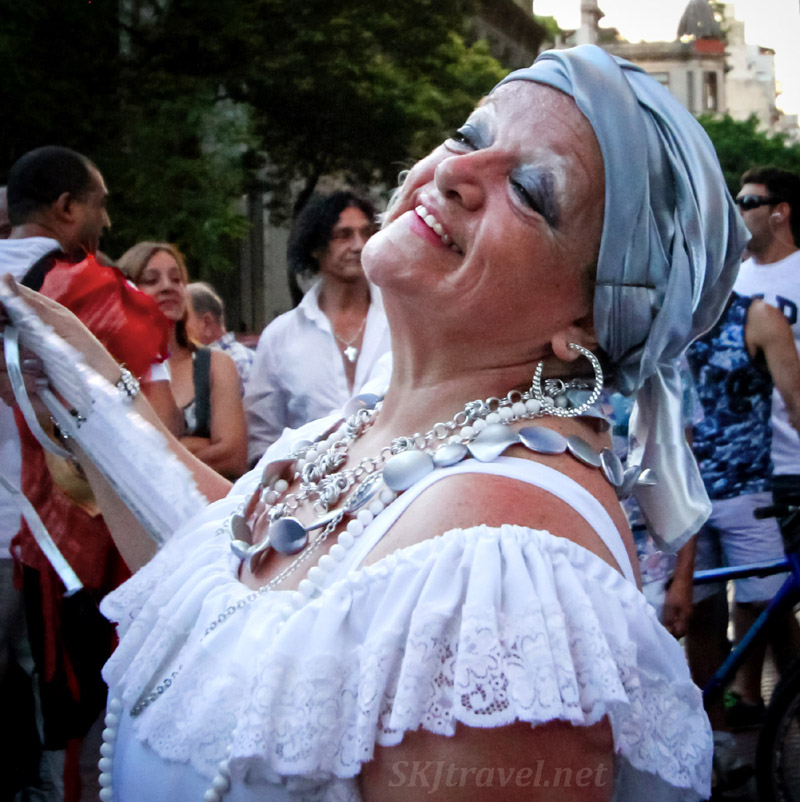 However, this Mama Vieja and Gramillero pair were our favorite. They really hammed it up the whole way, Gramillero especially, acting so old and crippled and beseeching the affections of Mama Vieja who often shoed him away with her fan. It was really entertaining. 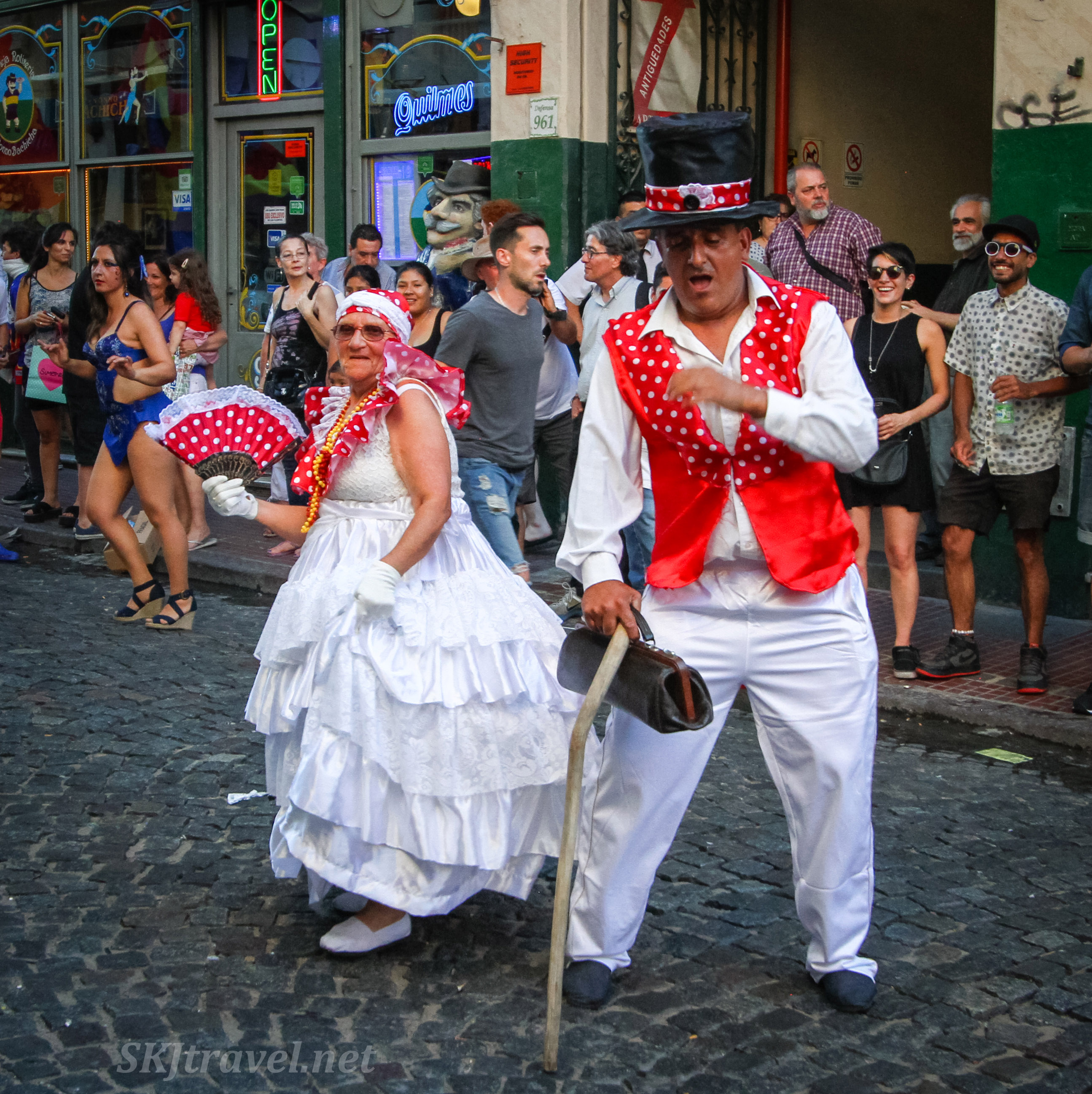 "The Escobero is a younger athletic man who does acrobatics with a headless broom, meant to dazzle and wow watchers." 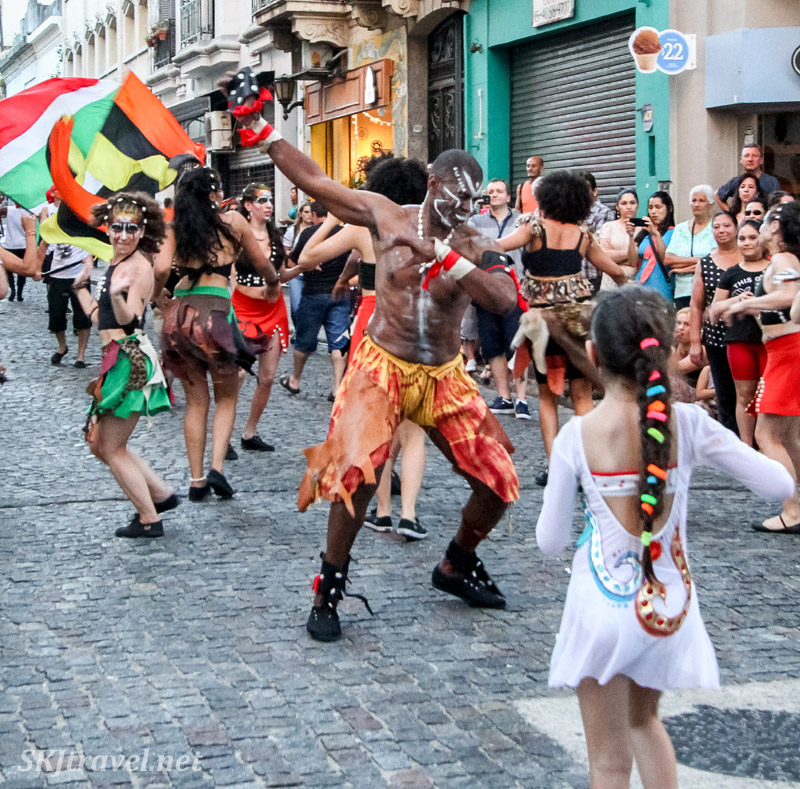 Most of the comparsas were lead by scantily clad, sometimes shockingly clad, women. I have not been to a real Carnaval like in Brazil, but I imagine you see an awful lot of these type of costumes. Some women wore them well or at least fairly well (imo) ..... 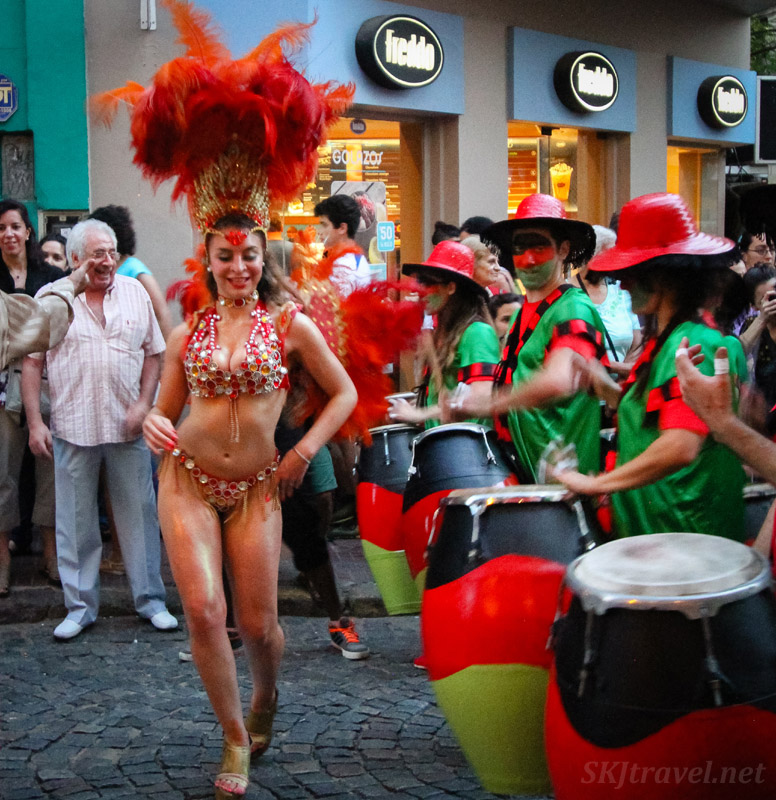 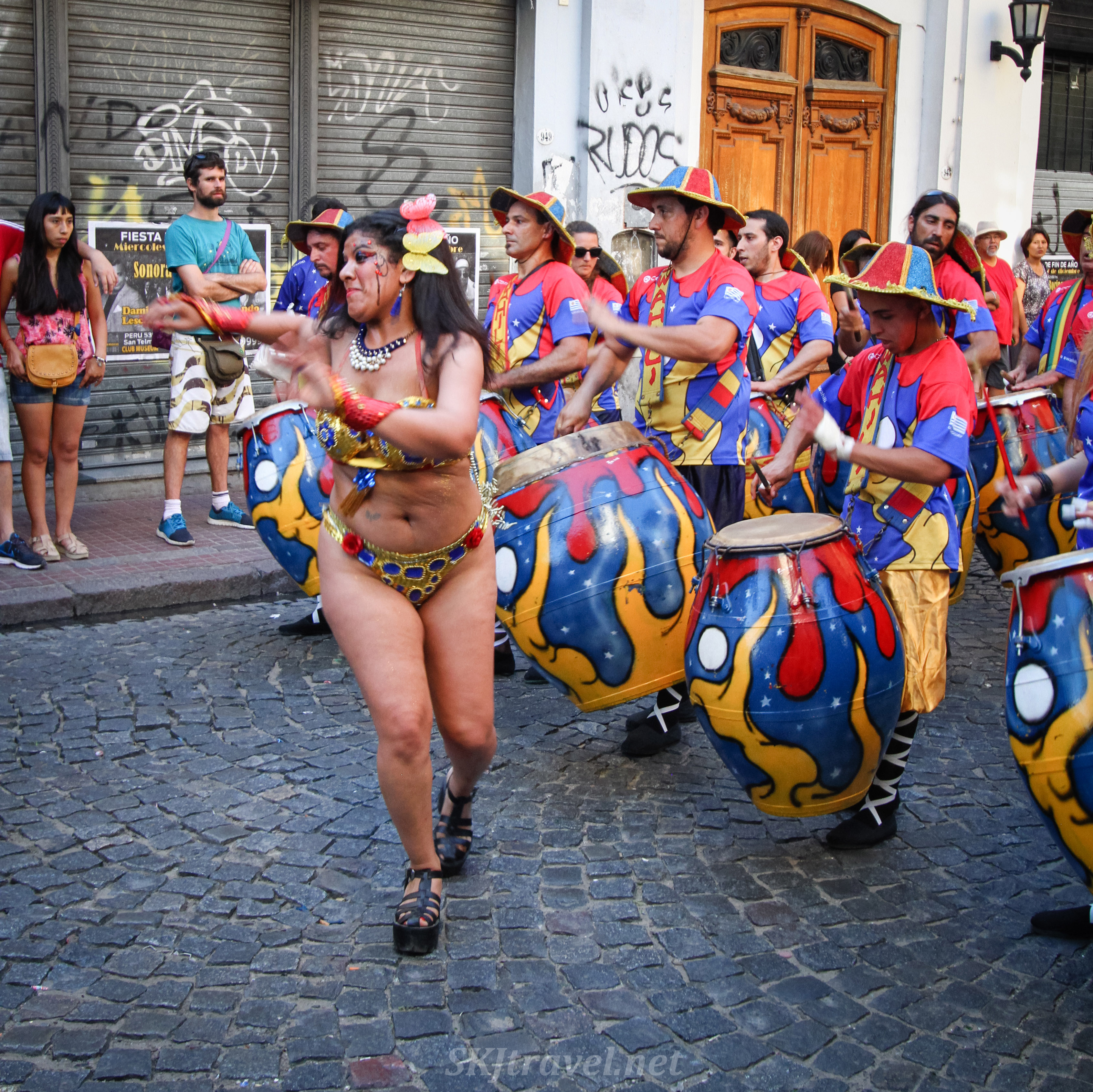 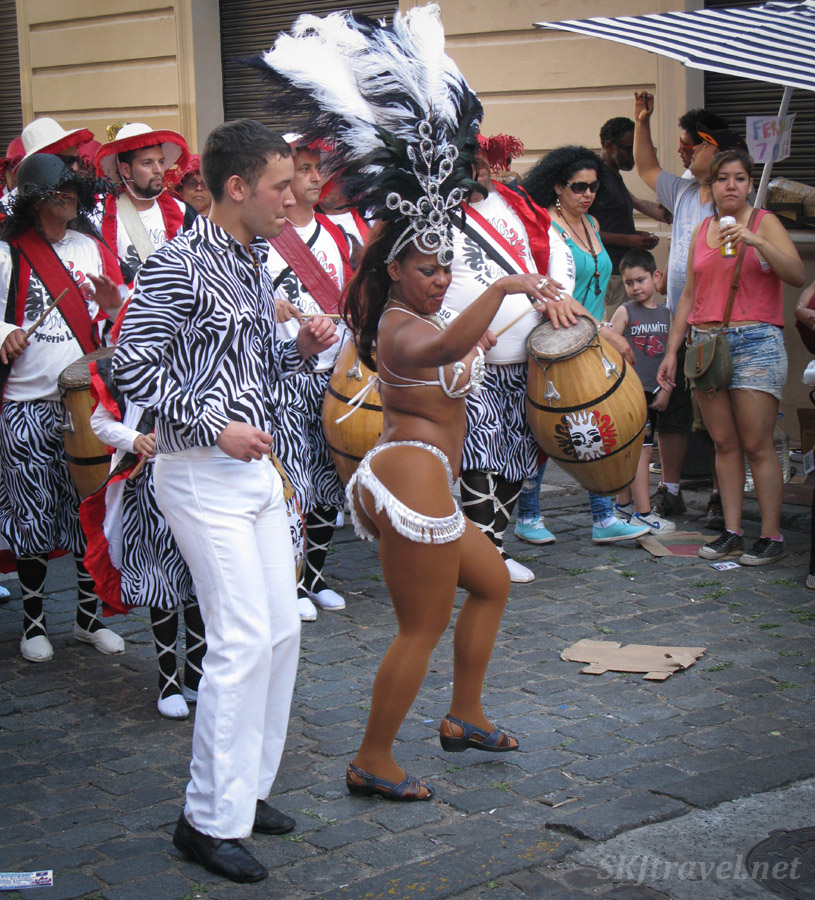 But, ummmmm ..... I realize this is a completely subjective issue of personal taste, but others were dressed maybe a little too skimpy for me to properly appreciate. 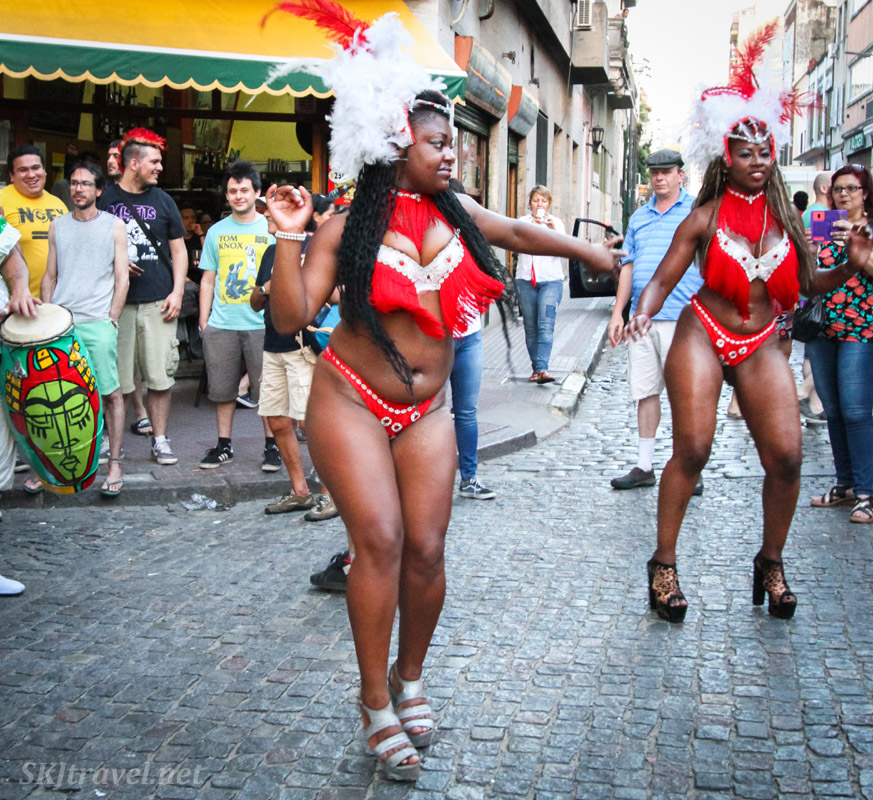 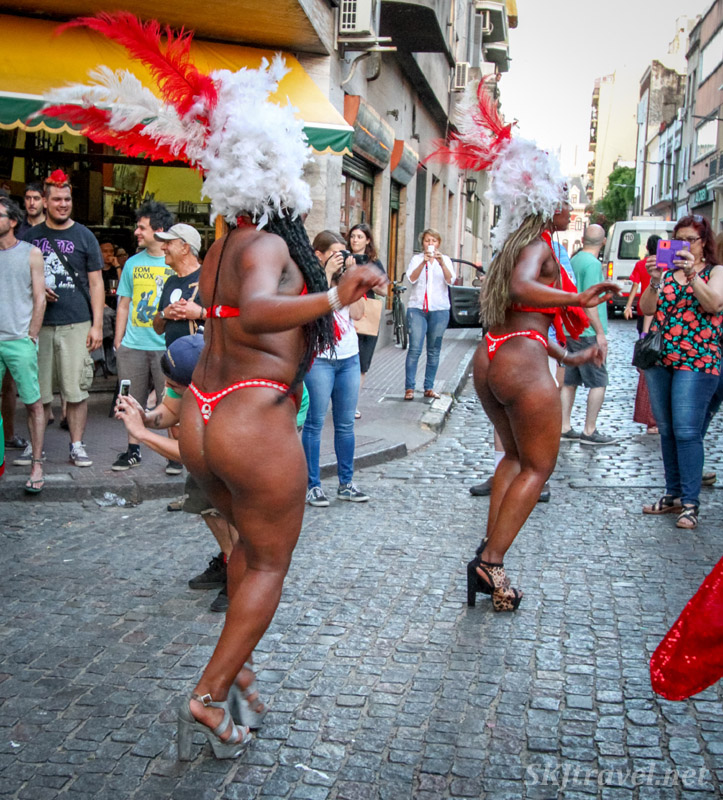 Sorry, I include that last pic to give explanation and context to the preceding statement. I fully admit I am perhaps a little stuffy about seeing thongs (the clothing type) worn in public, haha. It's just cuz I'd NEVER do it!  I also include it because this was very common and to point out again the crazy high heels on those cobblestone streets! Kudos to all those women dancing like that. My knees were tired just walking alongside them!

You'll notice the photo quality isn't so great ... I didn't know how to deal with the lowering light and moving subject situation. But we had a heck of a good time! 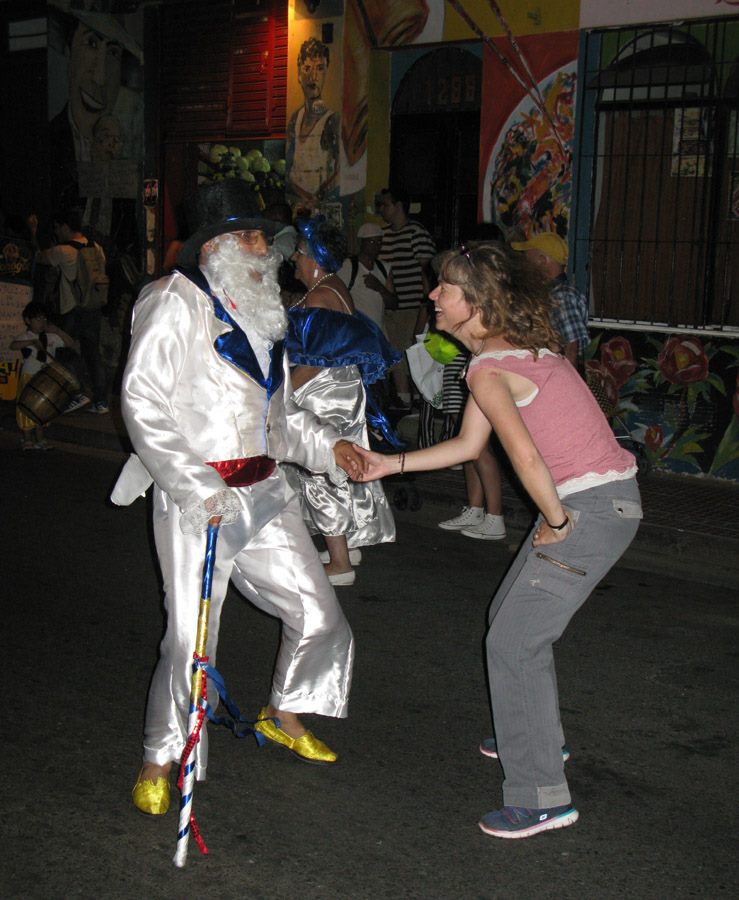