Driving around Chios Island, the fifth-largest of the Greek Islands, was an unexpected delight. I knew so little about Chios before going there to volunteer in the Souda Refugee Camp. But I will credit myself with doing just enough research to realize we should add a few days to our trip solely for sightseeing. Whew! What a nice time we had. We visited a number of interesting and picturesque villages (such as the Southern Mastic Villages), but even just driving the roads was an interesting and picturesque activity.

All along the roadsides we saw small shrines. I say "small" as a general size description, but within the context of shrine size, they varied pretty dramatically. Some were simple, some elaborate, some had a couple things inside -- maybe a candle and picture of a saint -- while some were practically mini-churches with a host of interior items. At first we thought they were for religious purposes, where people made offerings to saints. The first ones we came across were on this road overlooking the seaside village of Vrontados. We can't read what's written on them because Greek is all, well, Greek to us. 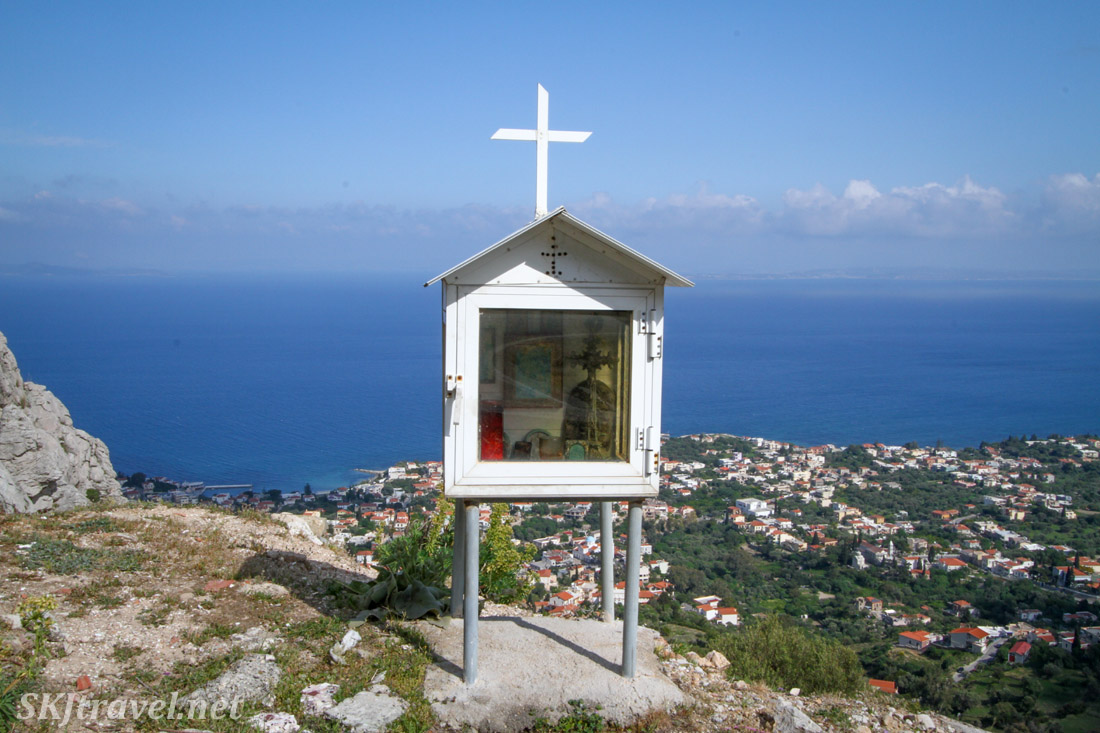 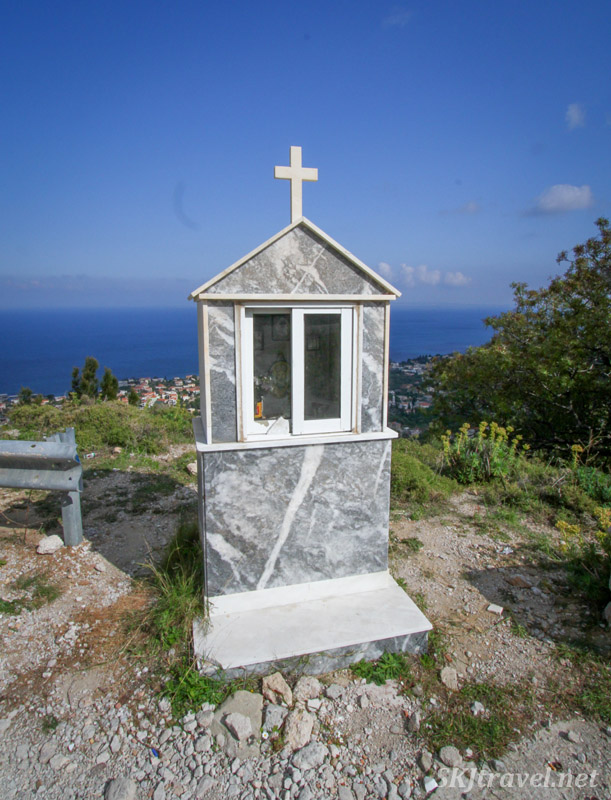 This is the interior, inside the little window of the shrine above. This is a particularly elaborate interior, and in fact the whole shrine is quite unique and upscale. The solid marble block is unusual, most shrines are elevated on a pole or stilts like the first one above. 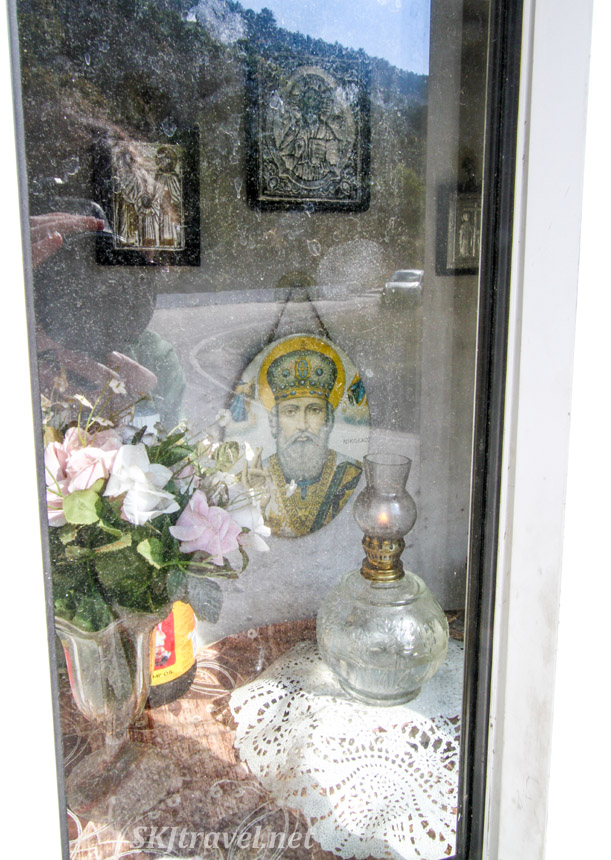 We came to Vrontados the night before, where we watched the very unique and slightly bizarre Easter rocket wars. The previous year, the tradition well over 100 years old now was called off due to complaints from some of the villagers. When we arrived, the proprietor of our hotel told us the alarming news that he didn't know whether or not the wars were going to happen, negotiations were still happening at the 11th hour with the unhappy villagers. To our delight, the rockets started going off at the appointed hour and we thought the whole show was really cool. But after we got back to the hotel, the proprietor told us that the number of rockets set off was only a fraction of the number traditionally used ... that was the compromise deal struck: the unhappy villagers said OK to a reduced number of rockets. I won't explain this event here; check out the rocket wars link. Impossible with my point-and-shoot to get good photos, as I had decided not to drag out the full camera set-up with tripod, etc., and instead just enjoy the show. But here's a couple shots. First of the rockets going between the warring church parishes and second of the moon rising over Turkey, just across the sea, reflecting on the water, red from all the rocket smoke. 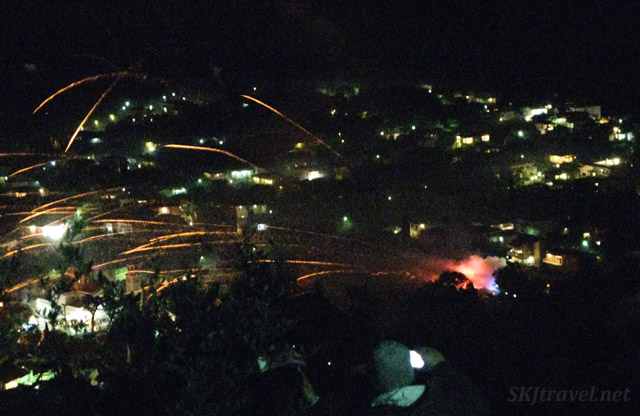 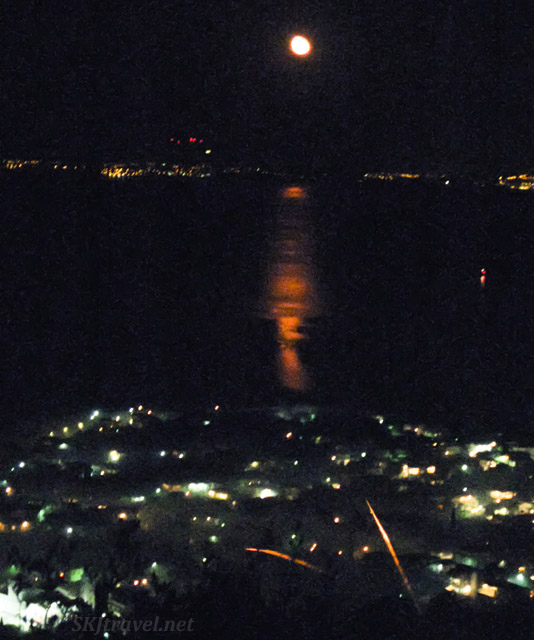 So, part of the reason for our initial supposition about the purpose of the shrines, was that where we saw our first ones above Vrontados, there happened to be an actual religious shrine. We didn't know at first what this was either -- we simply saw what looked like a little cave beside the road that was obviously something open to the public. So we pulled over and parked on the roadside, and checked out this narrow grotto. It was clearly a site associated with the island's religion: the Greek orthodox church,, but that was the best we could discern. 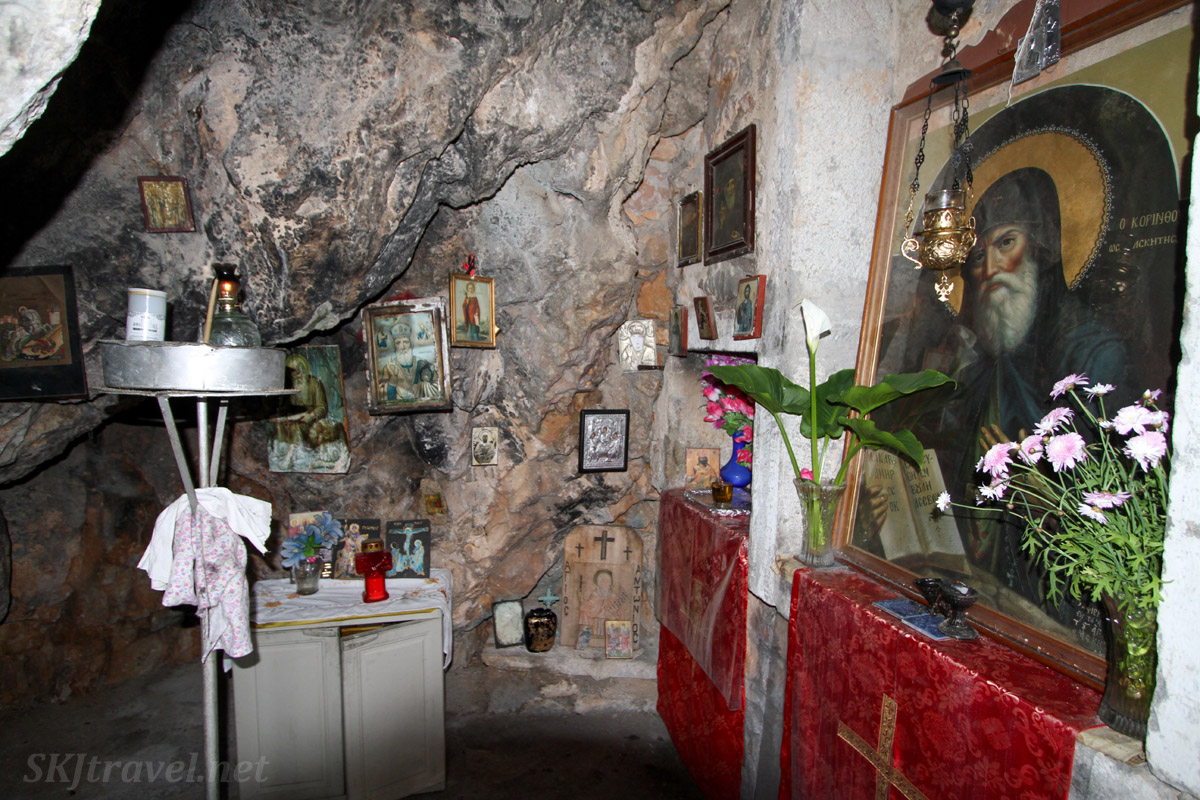 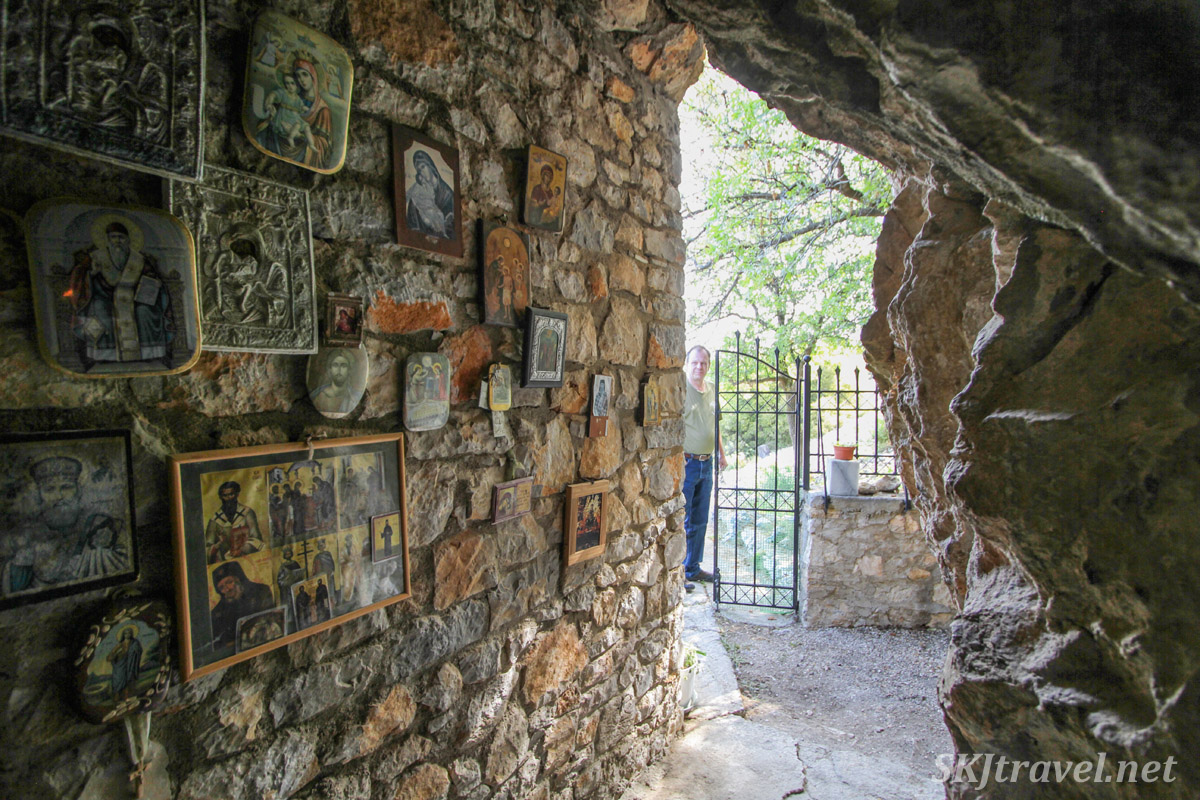 Near the grotto was what looked like an abandoned farm house. You may know us well enough by now to know we weren't going to just pass that up. We walked down the short driveway and poked around the buildings. It wasn't really all that interesting until Erik said to me from beside a little wooden pen, "There's a pig in here!"

I thought he was kidding. I laughed. I walked over to the pen, and to my surprise ..... 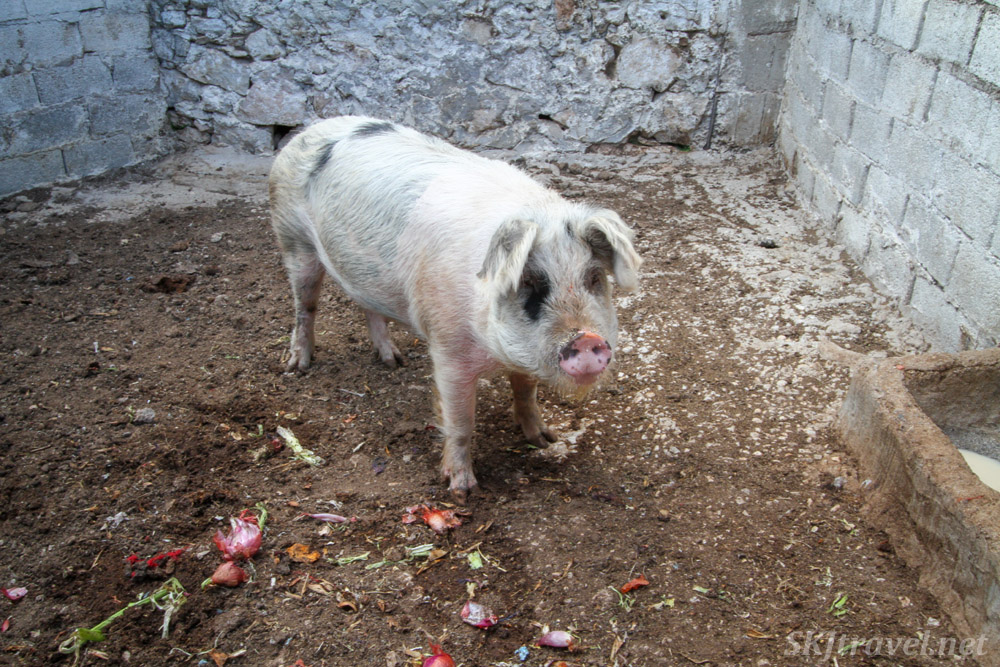 As we were walking back up the road to our car, a man parked his truck near the grotto, got out and started walking up the road toward us. He was dressed in rugged clothes and tall rubber boots. We kind of presumed he was the owner of the pig and was going to give us a little heck for trespassing. He may well have been the owner of the pig, but his mission was something else. He came up and asked us in English if we knew what that grotto was. We said, "no." He then proceeded to explain it to us, that it was dedicated to a saint that one of the churches in Vrontados is named for, Saint Nicholas. We chatted a wee bit. And that was all he wanted. He saw us, it was clear we were tourists, and he took it upon himself to educate us. Then he walked back to his truck.

As we covered more and more ground around the island, the little shrines were so numerous and so varied in size, shape, detail, we grew very curious. We couldn't work out what was the standard for building them ... why some so tiny, some so large. Were they for different saints, built by different churches, perhaps, or patrons of the churches? We hadn't thought to ask the nice man in the white truck about the little shrines because we made a presumption about them. But finally we did the sensible thing and asked a local ... our fellow volunteer, Despina, who had lived on Chios in the past. She said they are erected by the families of people who die in those spots in memory of their loved one. Our friend in Athens confirmed this. And in a very interesting coincidence ... later in the year, Erik and I were visiting our friend in Namibia, and driving out of Swapkopmund, a long section of the highway is lined with small trees, obviously recently planted and carefully tended to. Then they abruptly ended. I thought it was something the government was doing to combat the desert as they have done in northern China, where I documented a peasant village and its reforestation efforts trying to stave off the desertification of the region. I asked Berrie about it and he explained that a wealthy Greek man had died in a car accident outside of town and his family built a shrine along the road at that spot and vowed to line the road with trees all the way from the town to the shrine, but they hadn't finished yet. Just as Berrie finished the explanation, sure enough, there was a huge, elaborate shrine on the side of the road. Just exactly like Chios.

So anyway, we eventually learned their purpose, so of course they are more melancholy to run across than if they were simply places to make offerings to saints and religious figures. Yet, they were so diverse, and frankly often very picturesque, that I started taking photos of all the ones we drove by. I guess it's really no different than taking photographs of tombstones in graveyards. Like, say, the Recoleta Cemetery, where I just about broke my camera taking so many photos, haha. So, with no apologies, I offer a selection of these roadside memorial shrines ... perhaps you will find them interesting and picturesque, too. 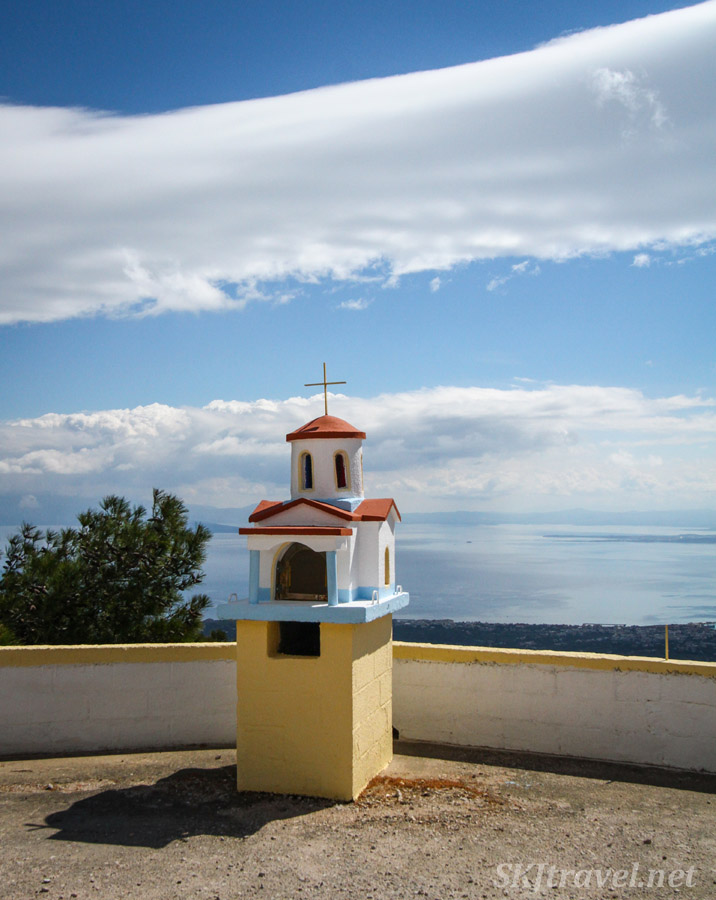 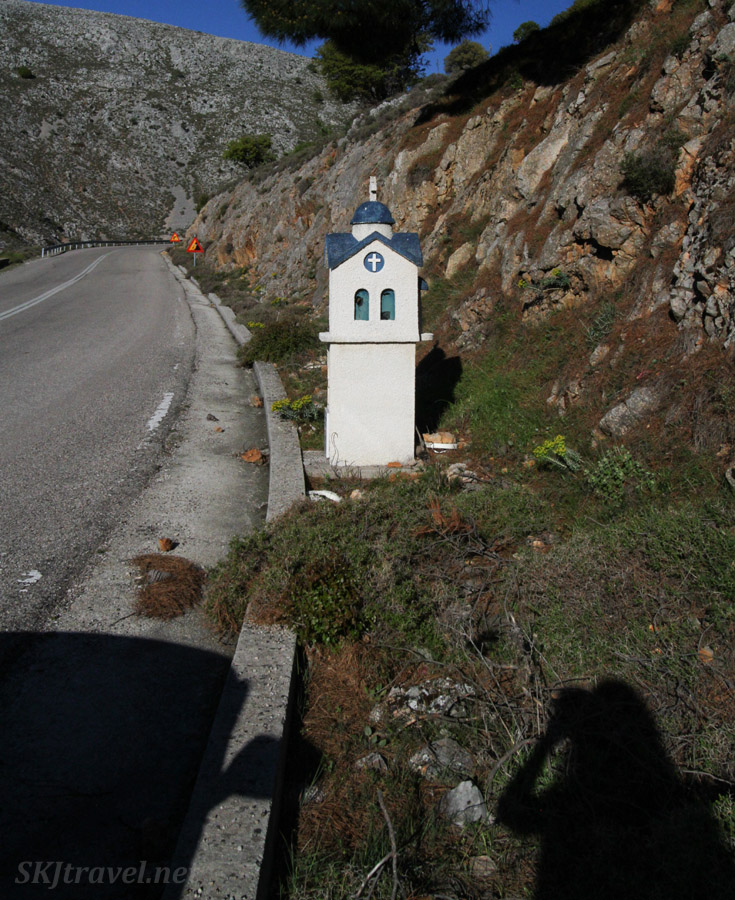 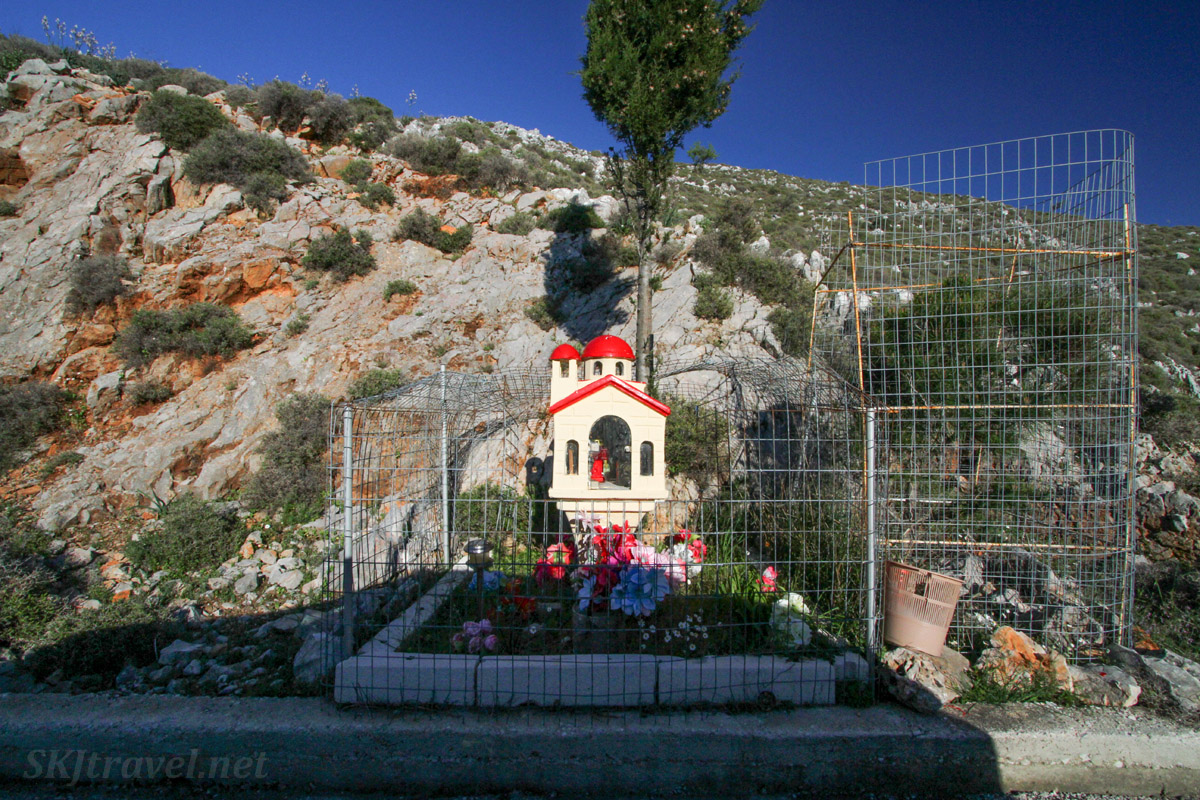 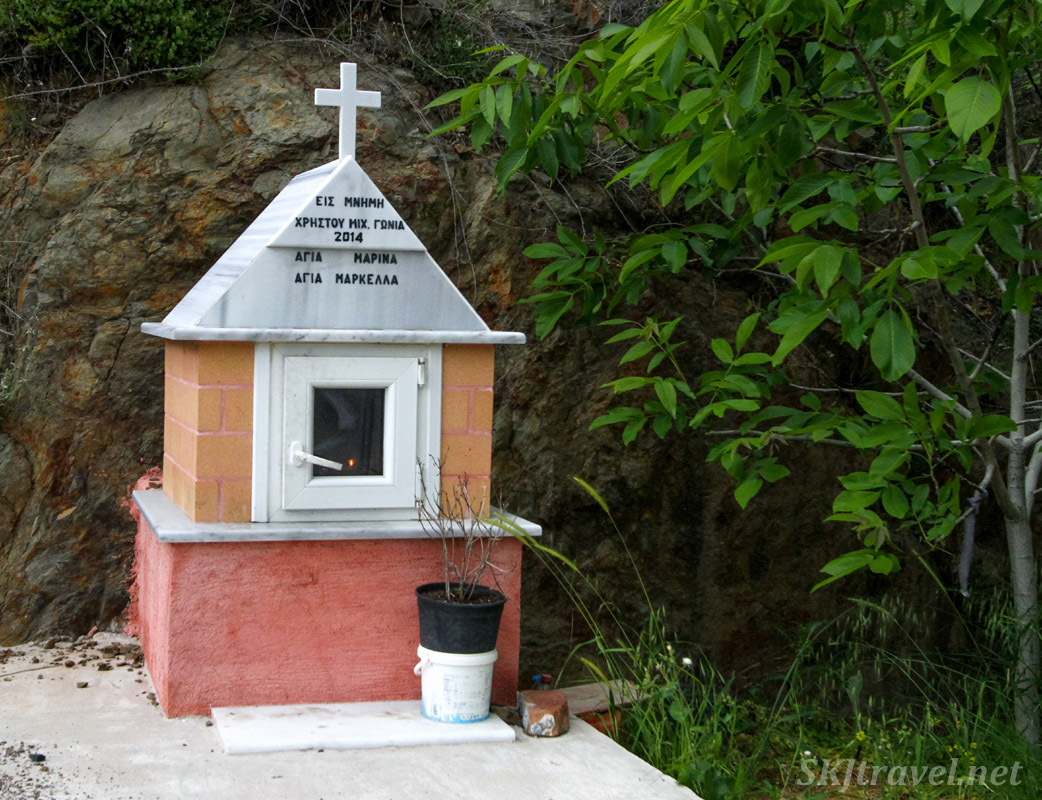 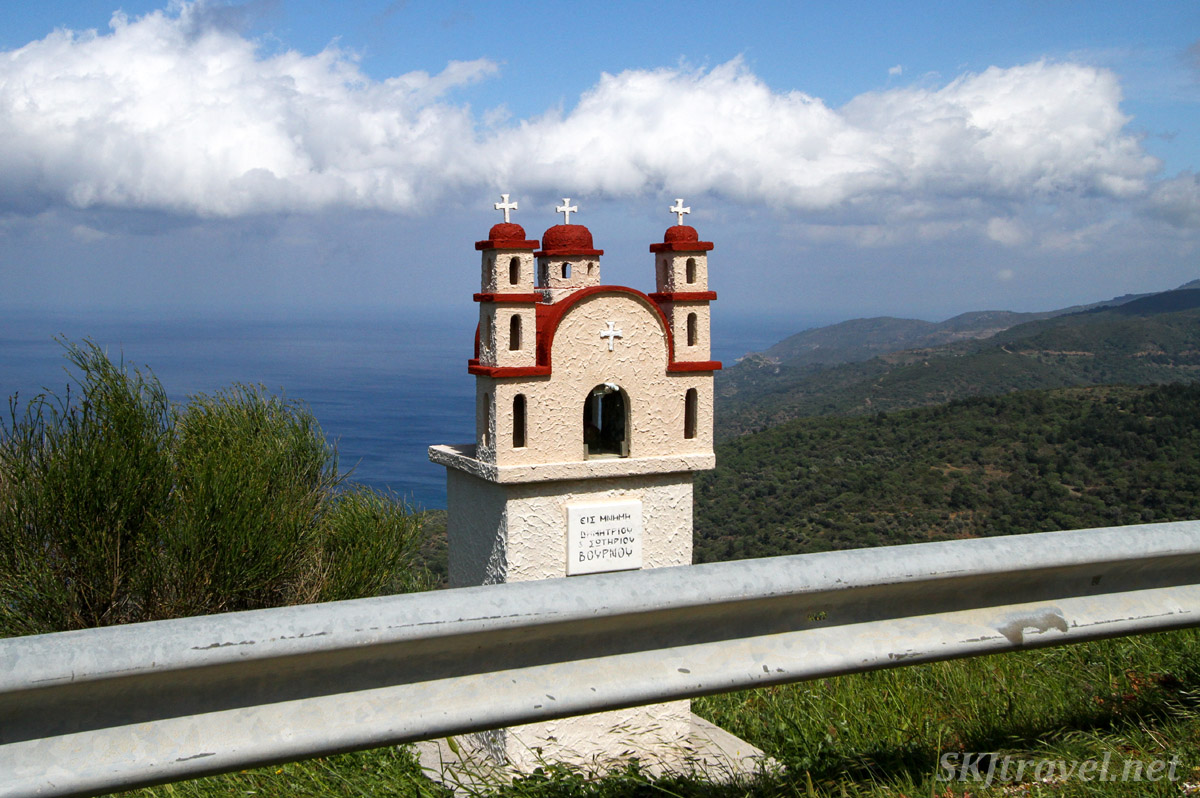 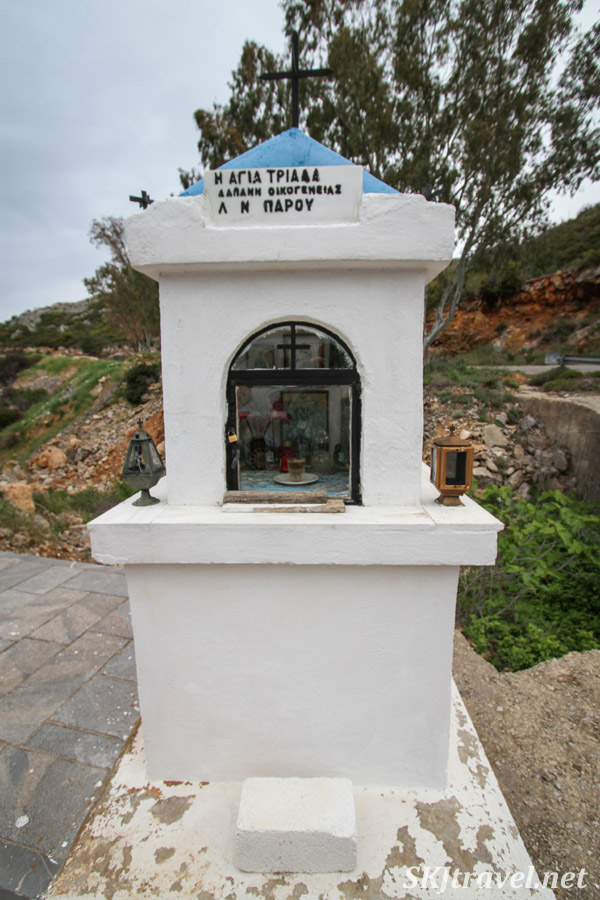 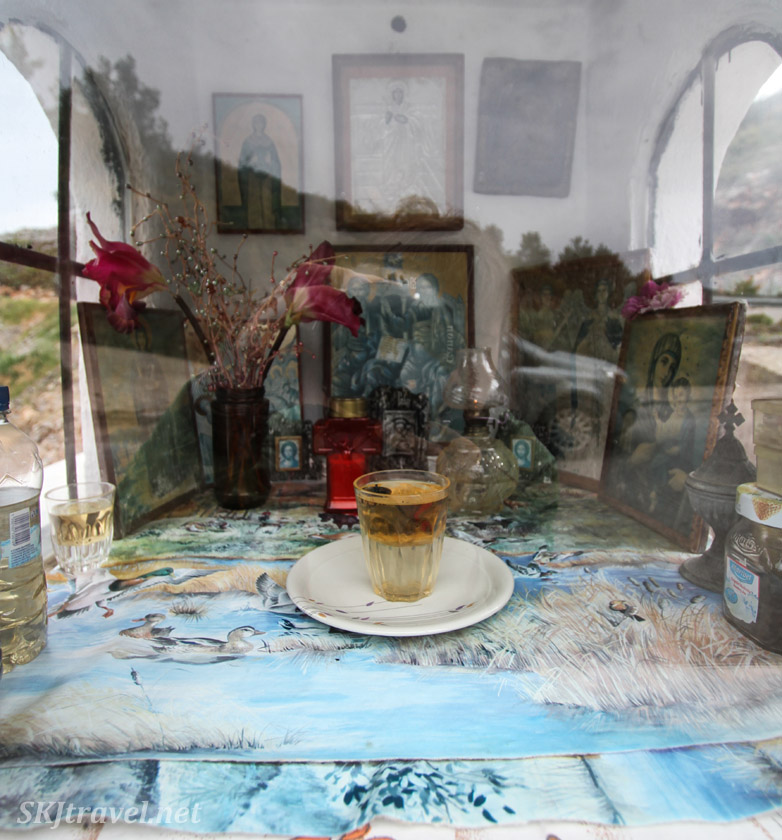 I wonder if two people died here at the same time or if there were two separate incidences. 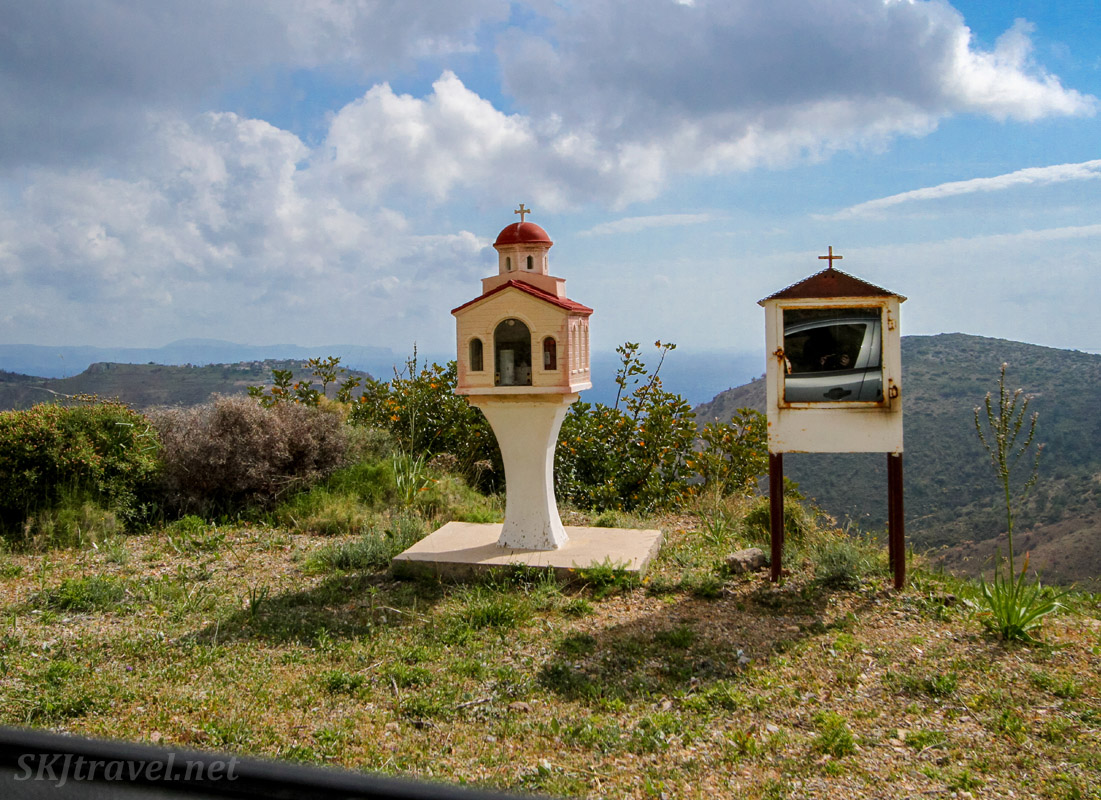 I'm fond of this small, simple, rusted one. Who knows why. Some things just speak to you more than others. 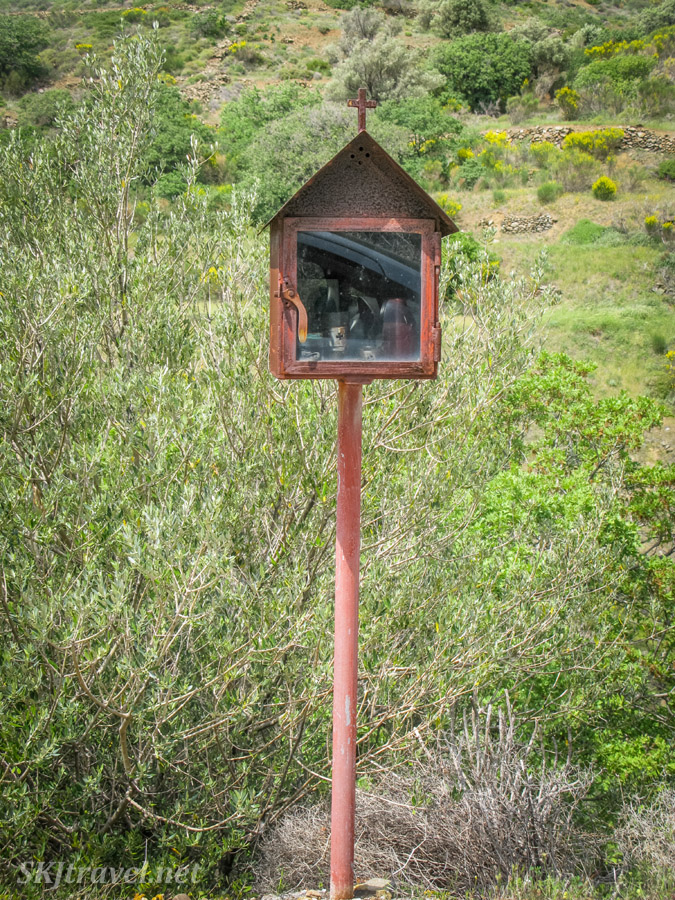 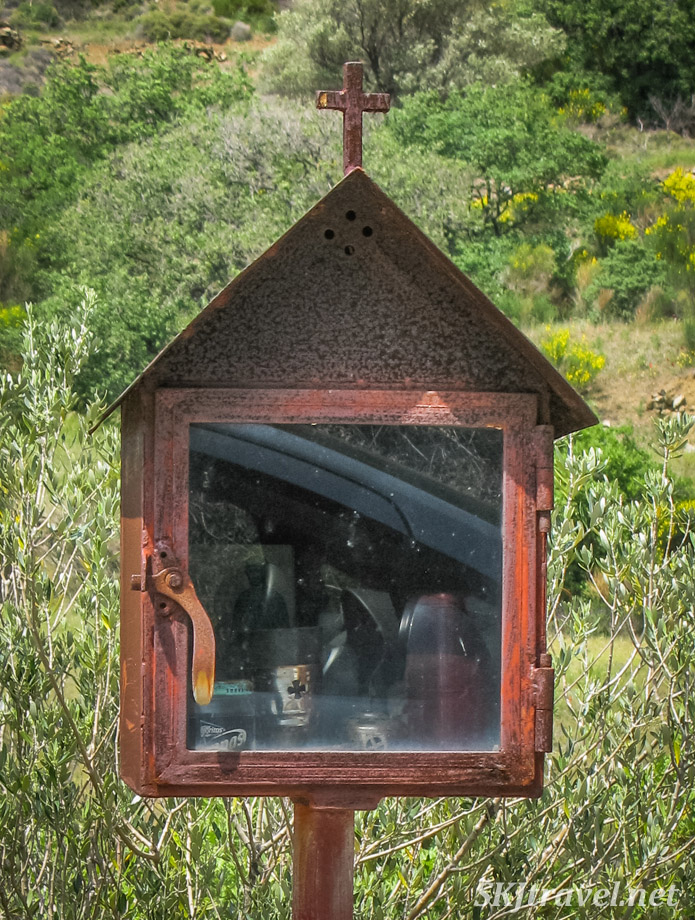 But my favorite by far was this very old stone shrine, crooked on the hillside with the lone tree and gathering clouds. 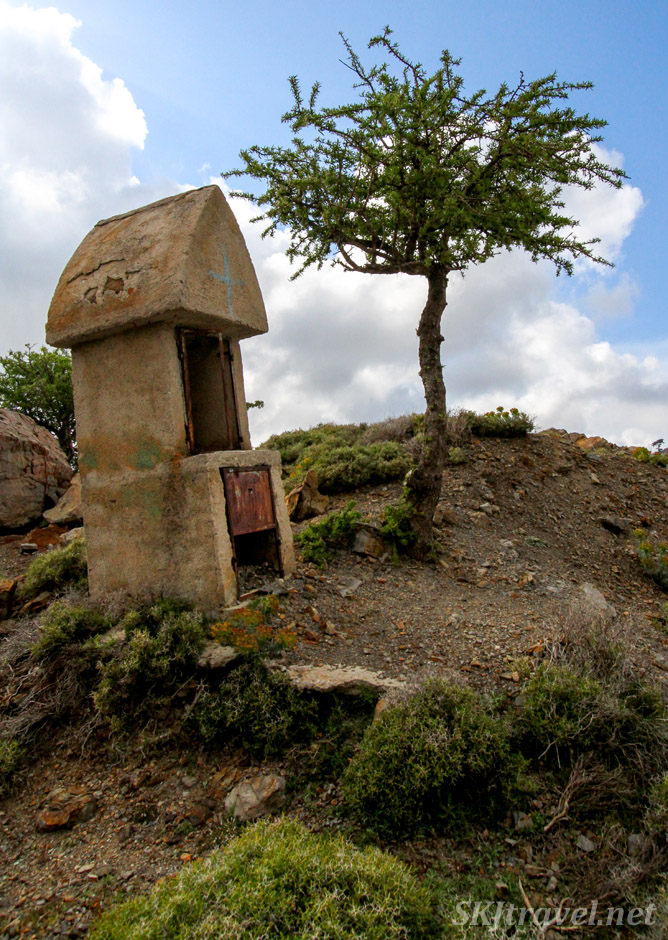 This was situated near the road and behind it, down a short driveway, was a small temple overlooking the Aegean Sea. We drove to it and got out to take some photos. Erik, of course, tried the door, and to our pleasant surprise, it opened. We walked in to this tidy, colorful and very small church. 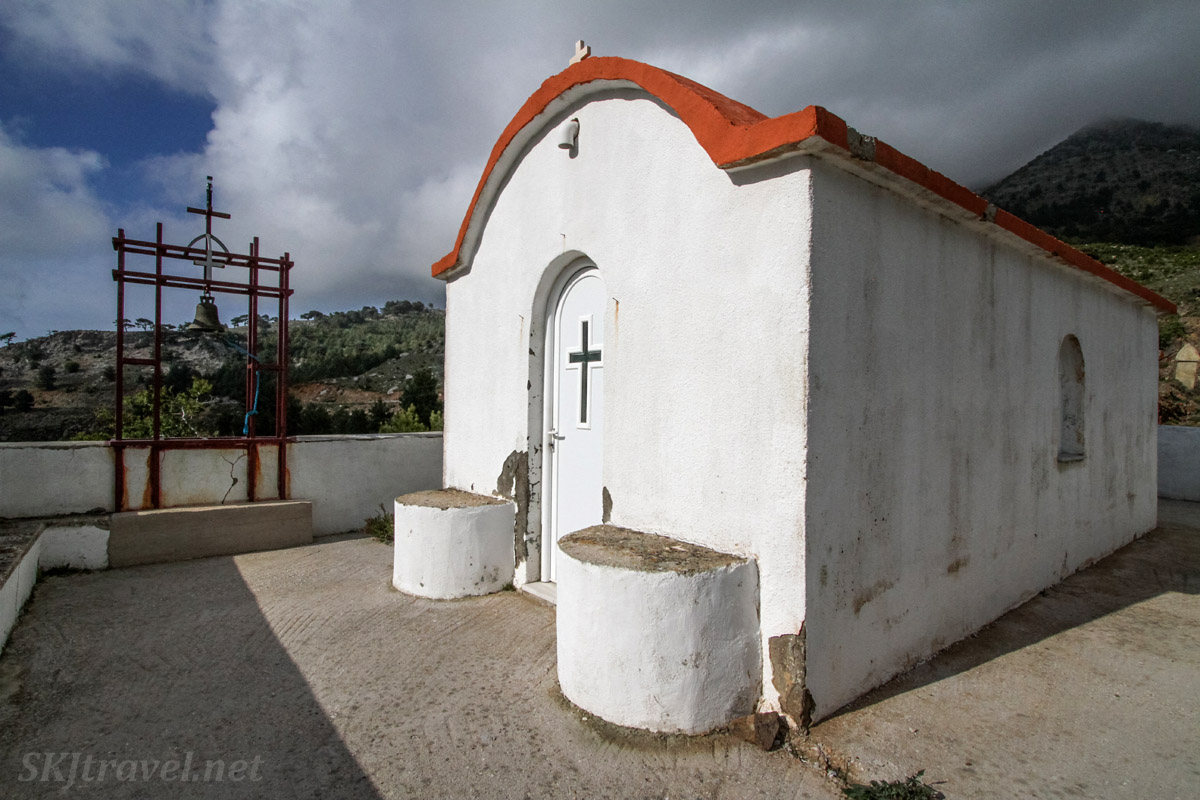 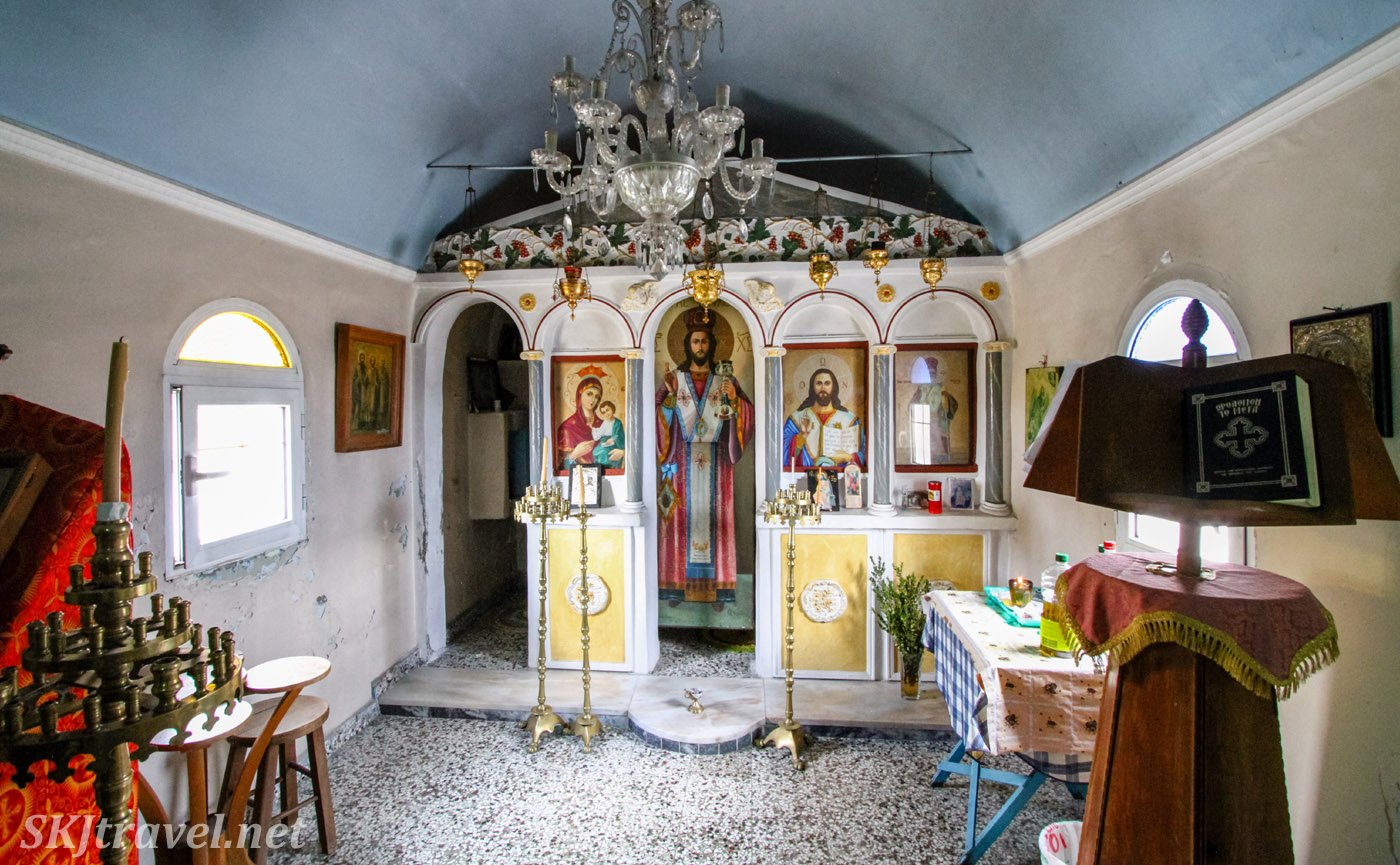 Here's another church we passed driving, which I thought was pretty, but we didn't stop to investigate. It looked like it might also be a school of some sort. 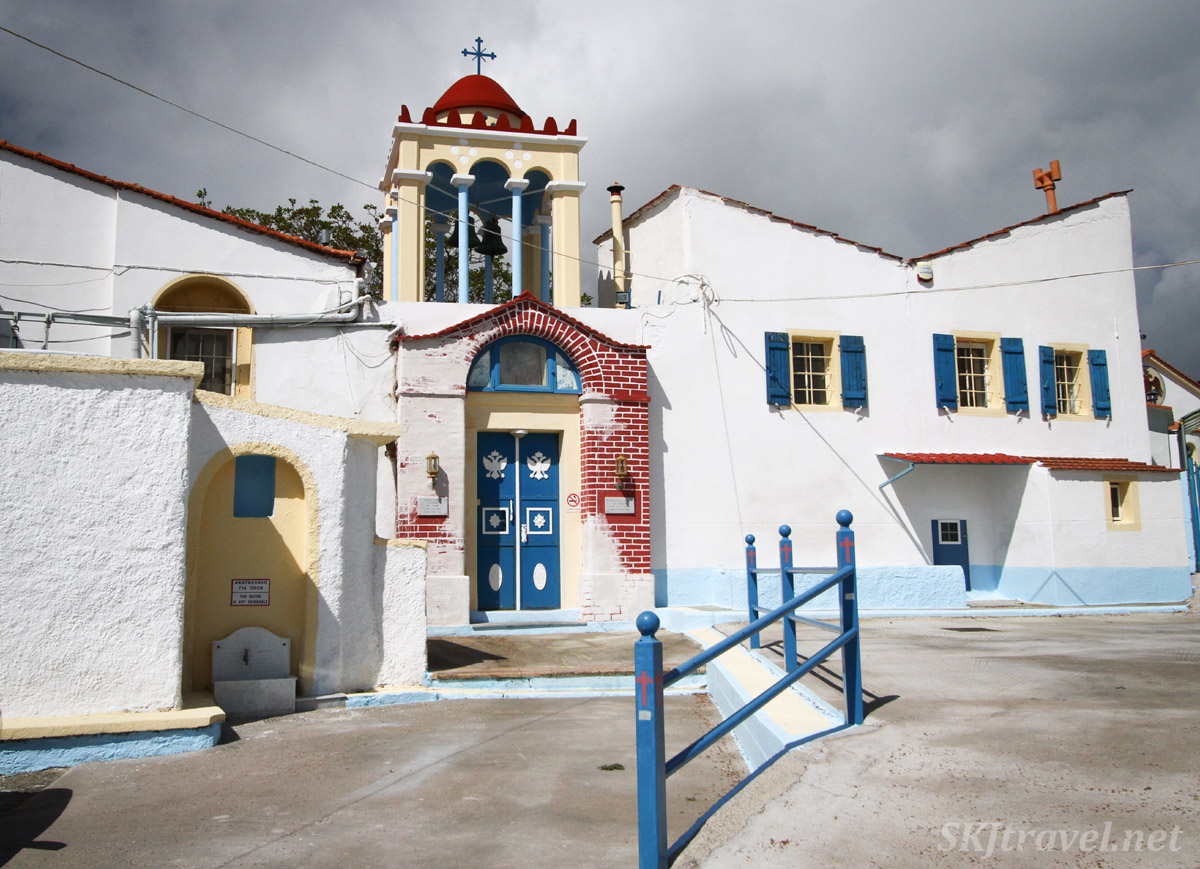 The most curious thing we saw along the roadside was this row of stuffed animals and toys, left as if in offering or memorial. Despina said they had been there for a long time and nobody ever disturbed them, but she didn't know the origin or purpose of them. I imagine it well could be a memorial to a child who died there. But you must always appreciate what seems random. 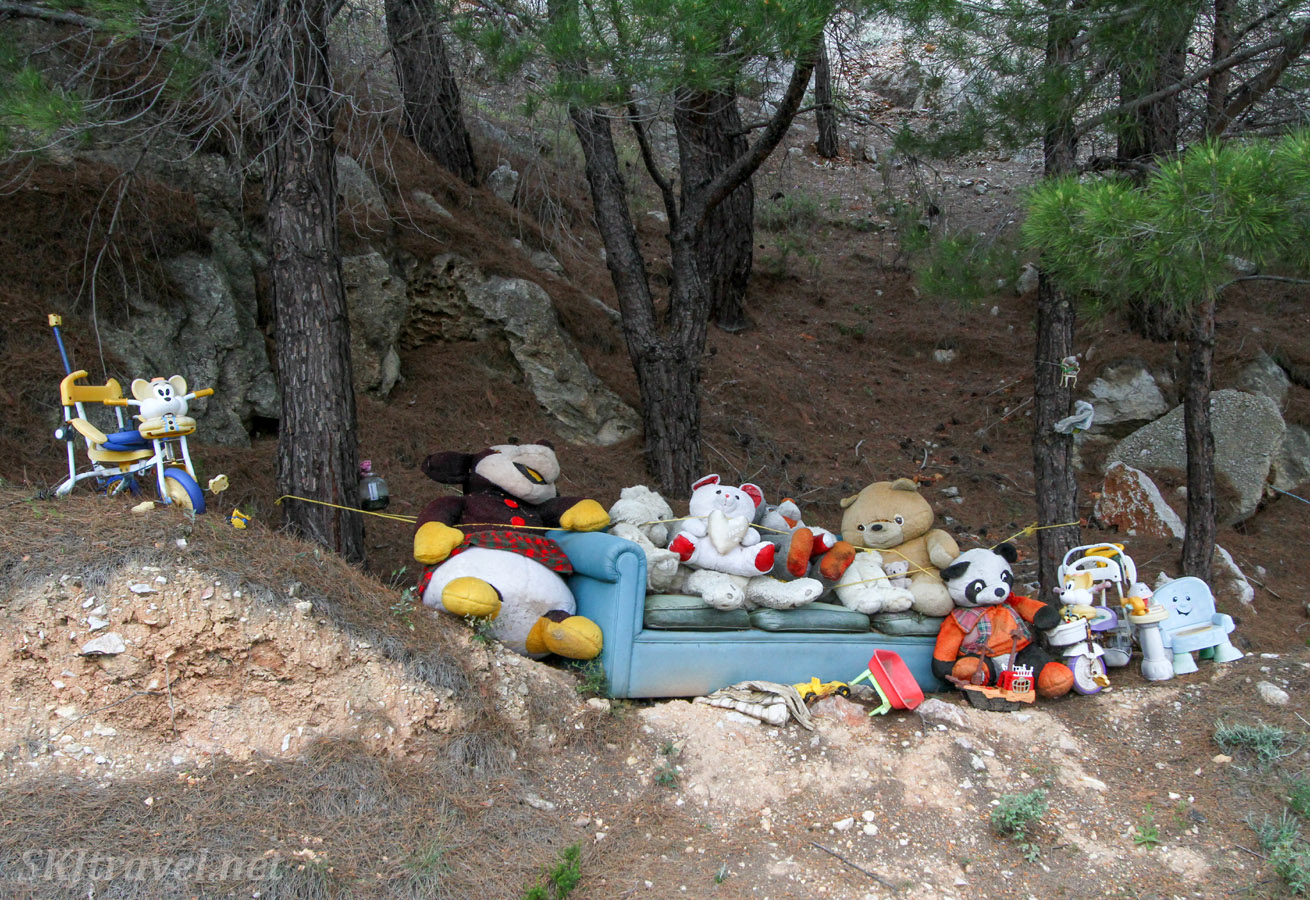