A Family Tale in the Okavango Delta

I saw her on the opposite bank of the river, her head drooping down and walking an unhealthy-looking gait. She sat down in the grass and vomited. I could see, even from across the river, that it was only stomach bile coming out, indicating that she had been vomiting for some time to have reached this point of only bile. She was sick and alone. It was that time of day when afternoon is late but evening is early, and the air was finally starting to cool down.

On my side of the river, her two sisters kept looking across. Busy nursing four children, they alternately laid down in the shade with them and stood up restlessly, eyeing their lone sister. They were clearly very keen to cross the river and be reunited with her; she was too sick to cross  herself. There was one big problem that was preventing a happy reunion:  crocodiles.

One of my favorite fiction authors is Daphne DuMaurier, and probably my favorite short story of hers is a short vignette describing a little family drama, a family who comes to the park and its pond every day. In your mind's eye as the reader, you conjure up images of all the characters. In the very last sentence, DuMaurier reveals that this whole story has been about a family of swans, not people. She so anthropomorphized the birds and their drama that the reader willingly presumed the story was about people. I always admired that skillful writing and have wished and tried to imitate that technique. But I've never been successful, and I tried it with this tale, but scrapped it, I just couldn't pull it off. The first tip-off that I'm not talking about people may have been two sisters nursing four kids, haha. Plus, I can't wait till the end to start inserting photographs, I want to include too many. So, no, this isn't a human tale, but a brief one about lions. Two lionesses and four cubs on my side of the river, and a lone sick lioness on the opposite bank. And between us, a whole mess of crocodiles. 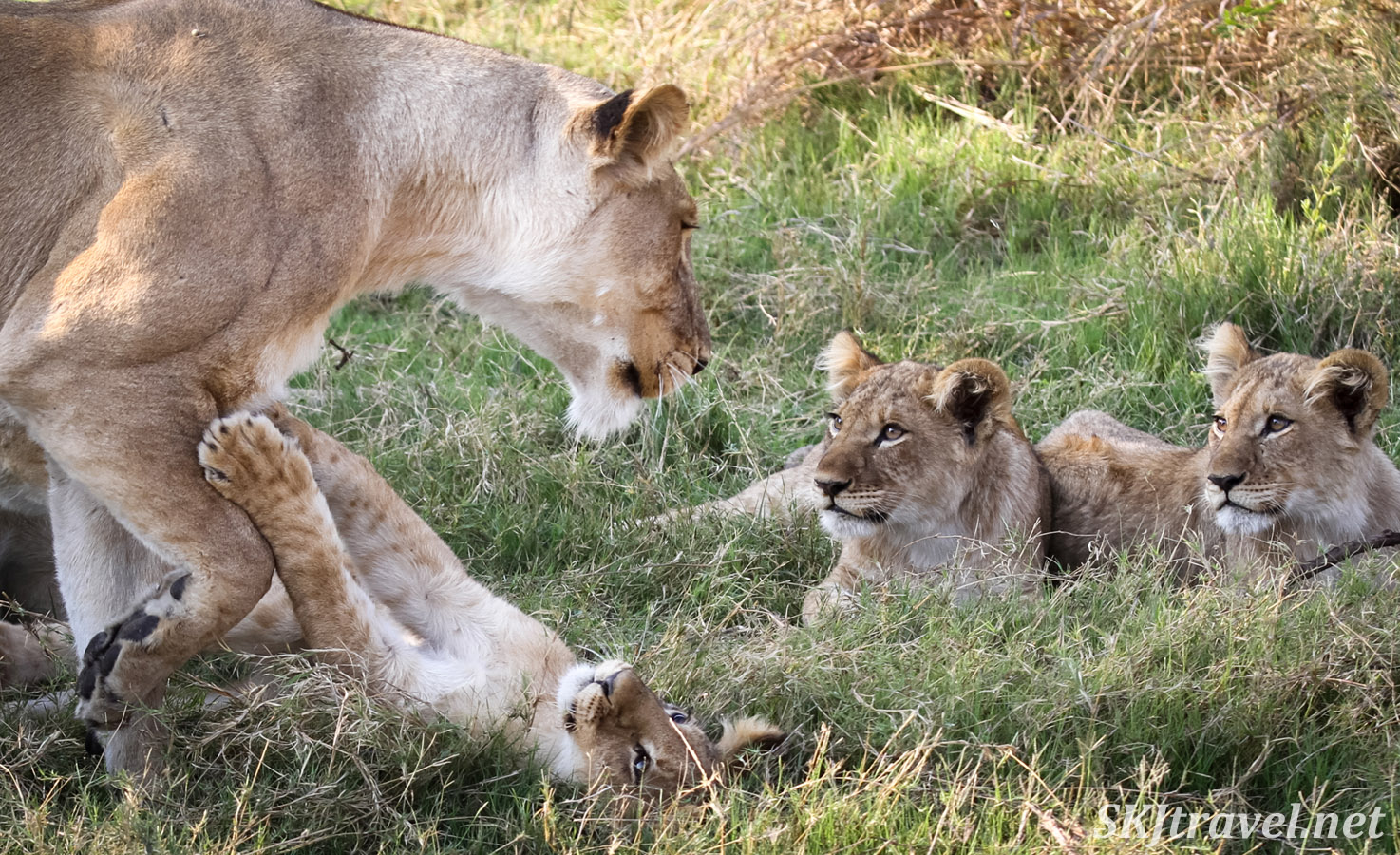 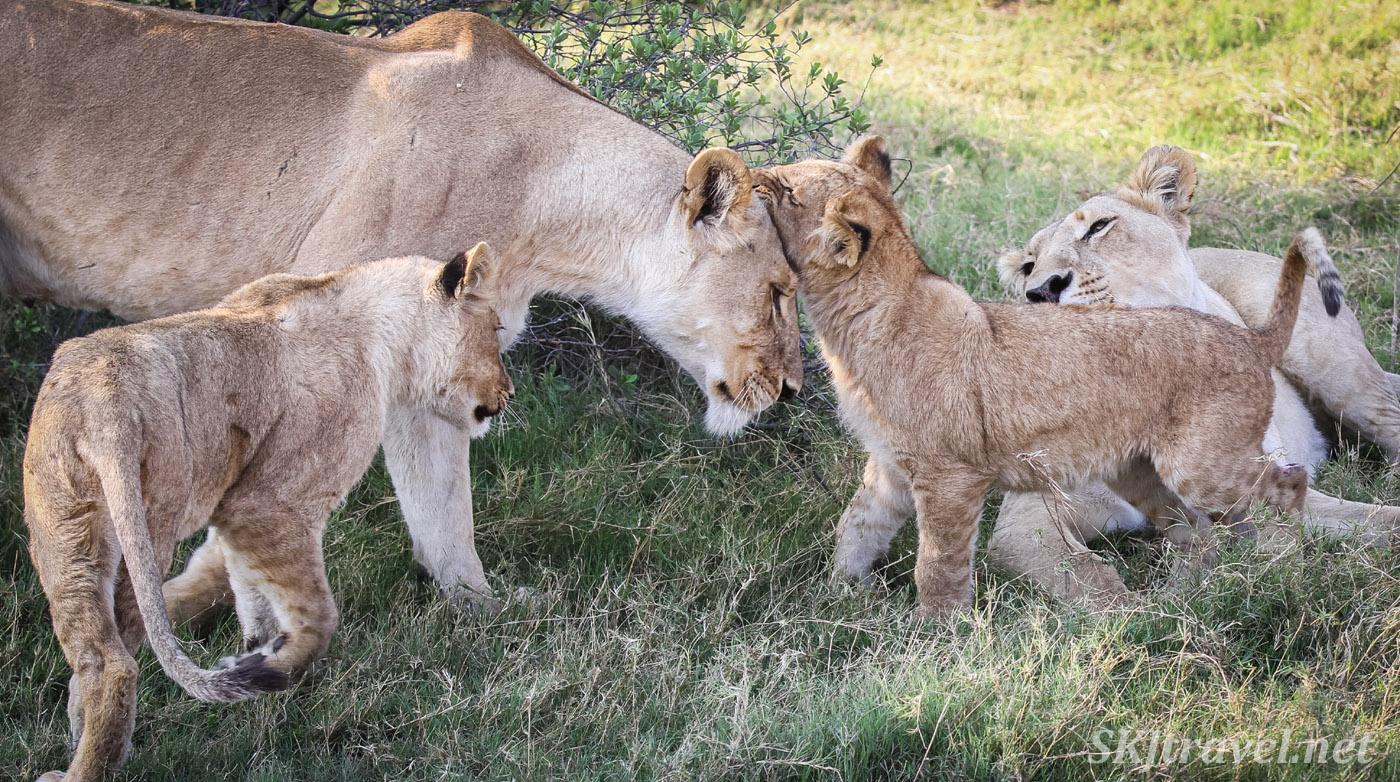 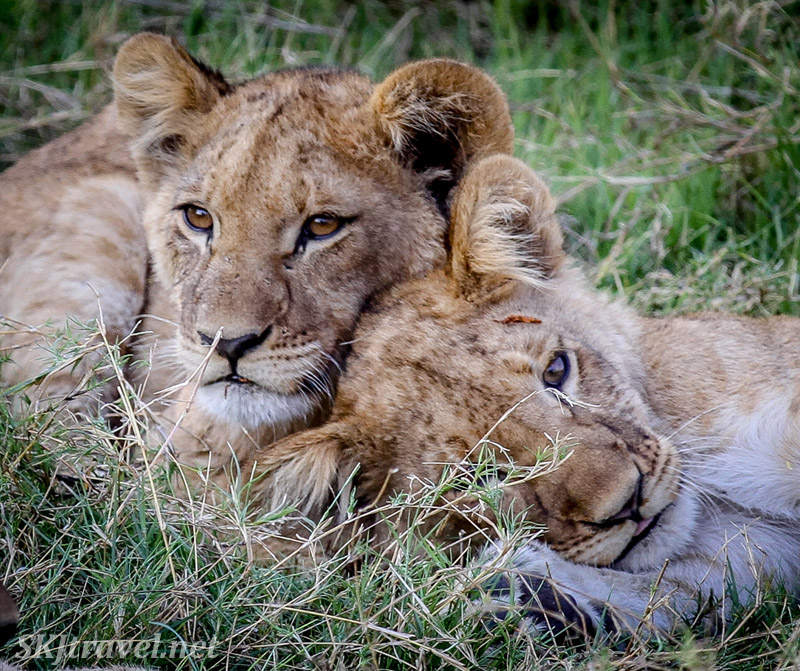 This is the first safari I've been on where we really had time to settle in and weren't just trying to see as many animals as we could in a short amount of time. We were there long enough that we could spend some quality time with individual animals or families. So on this afternoon in the Khwai Concessions of the Okavango Delta region, when we ran across the small family unit, we spent the whole rest of the day until dark with them. Watching the cubs alternately play, suckle and rest. Of course play time was the best! 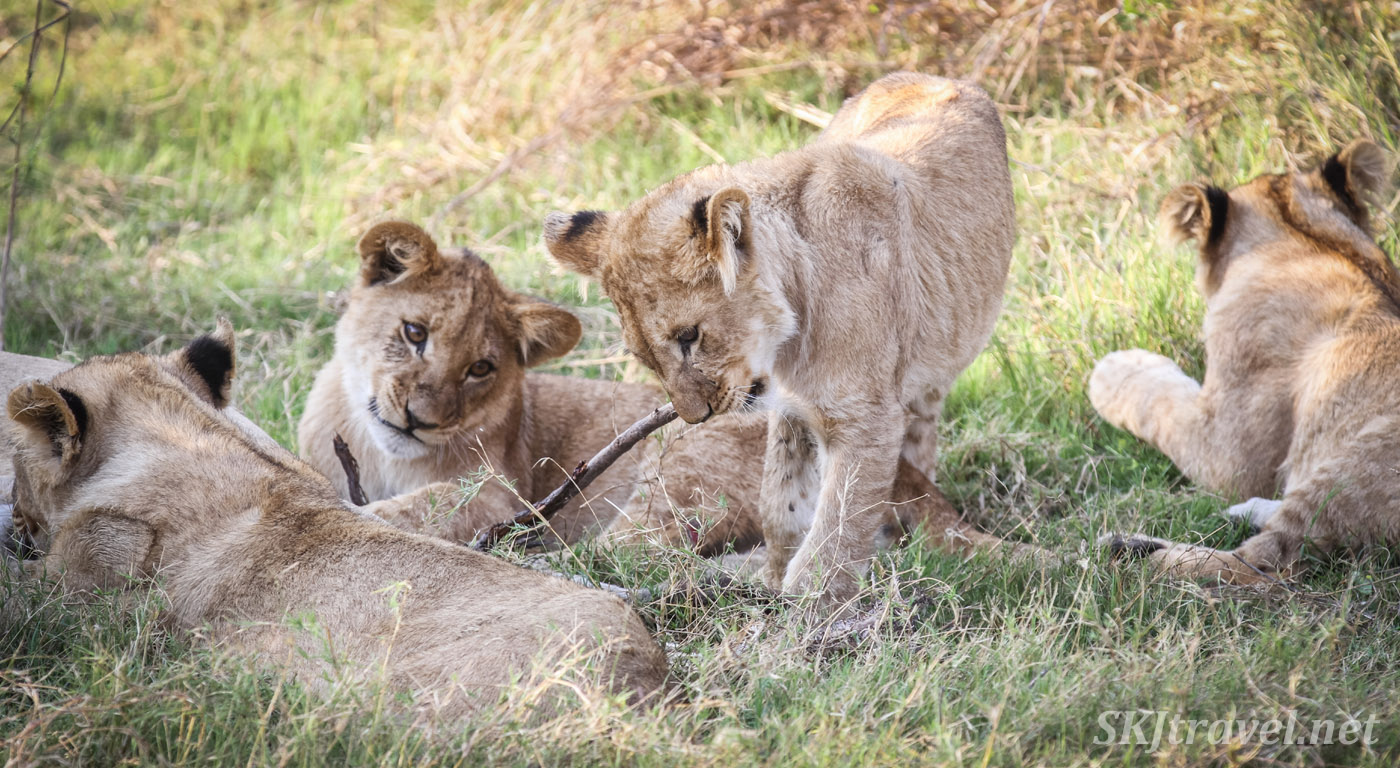 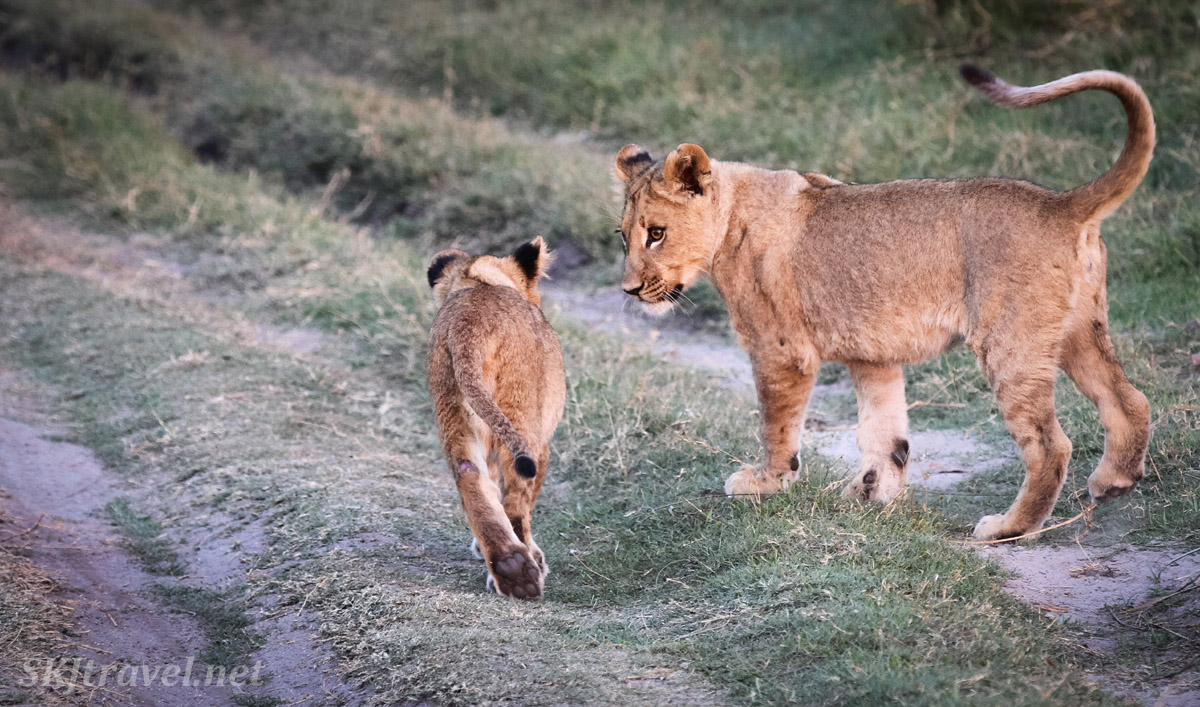 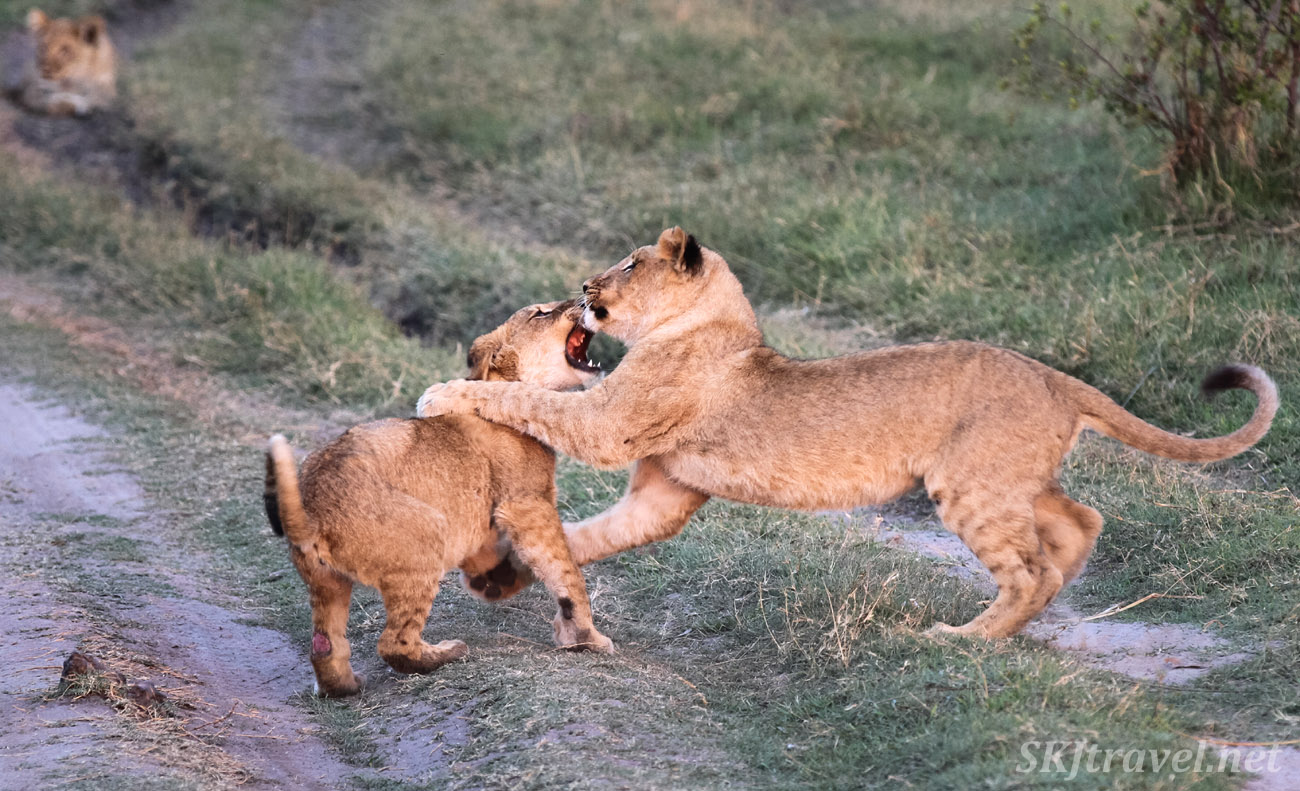 But sleepy and snuggle time was super sweet to witness, too. A little reversal of the usual ... the mom snuggles up to her cub who caresses her head. After awhile the cub started licking mom and cleaned her ears up real good. 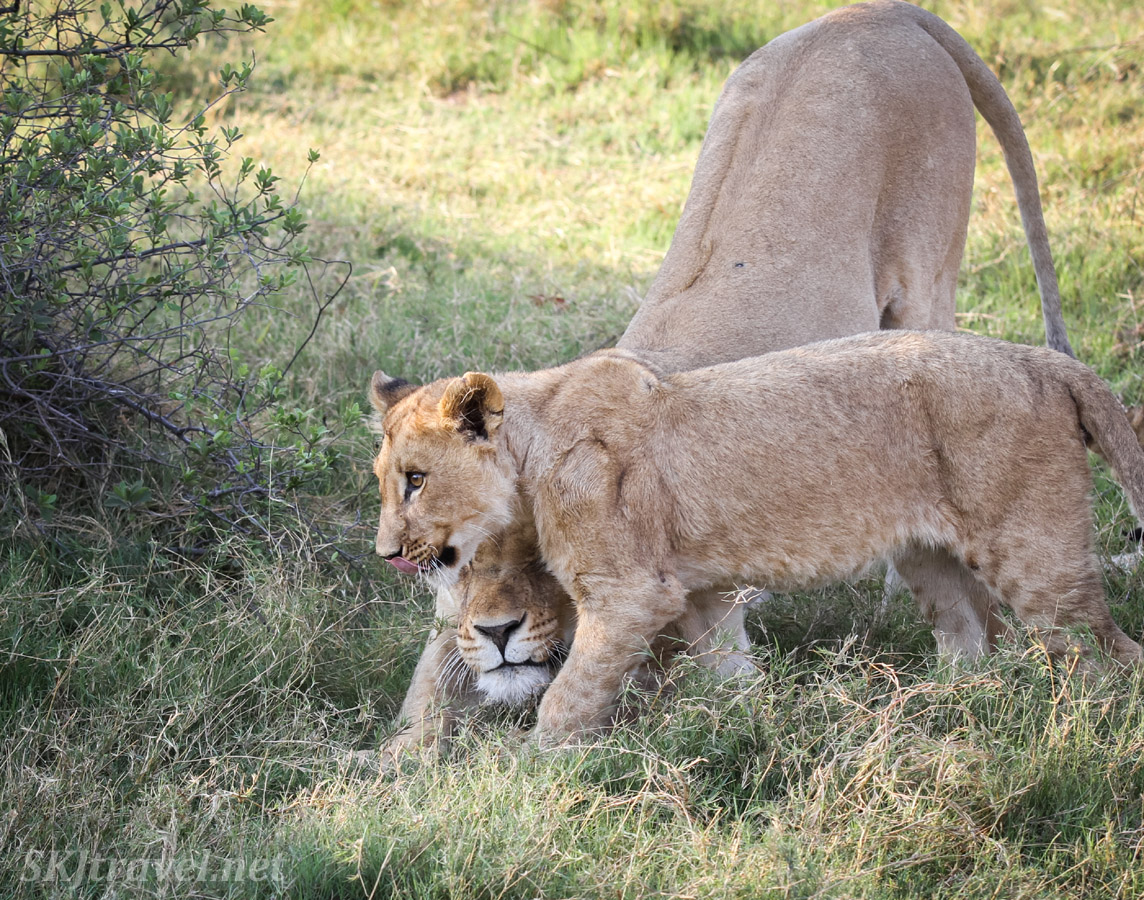 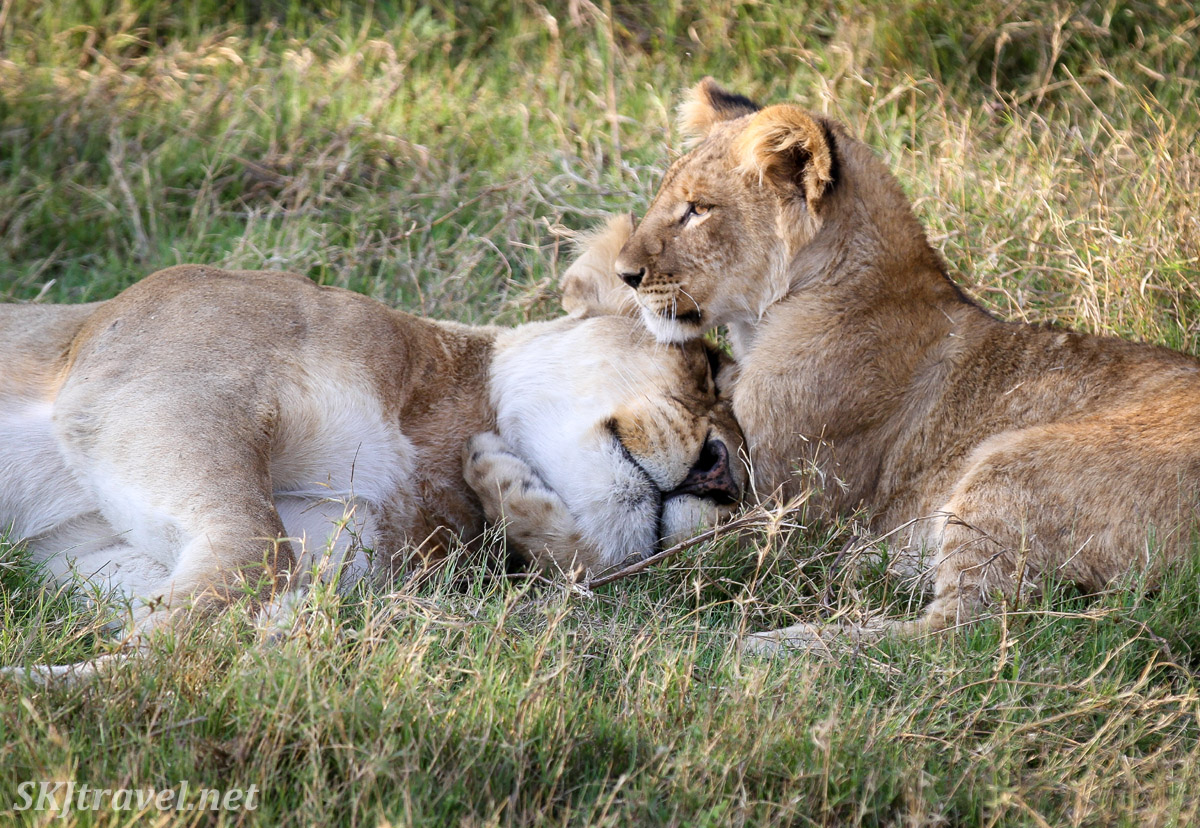 And now it's time for a big yawn to wake up! 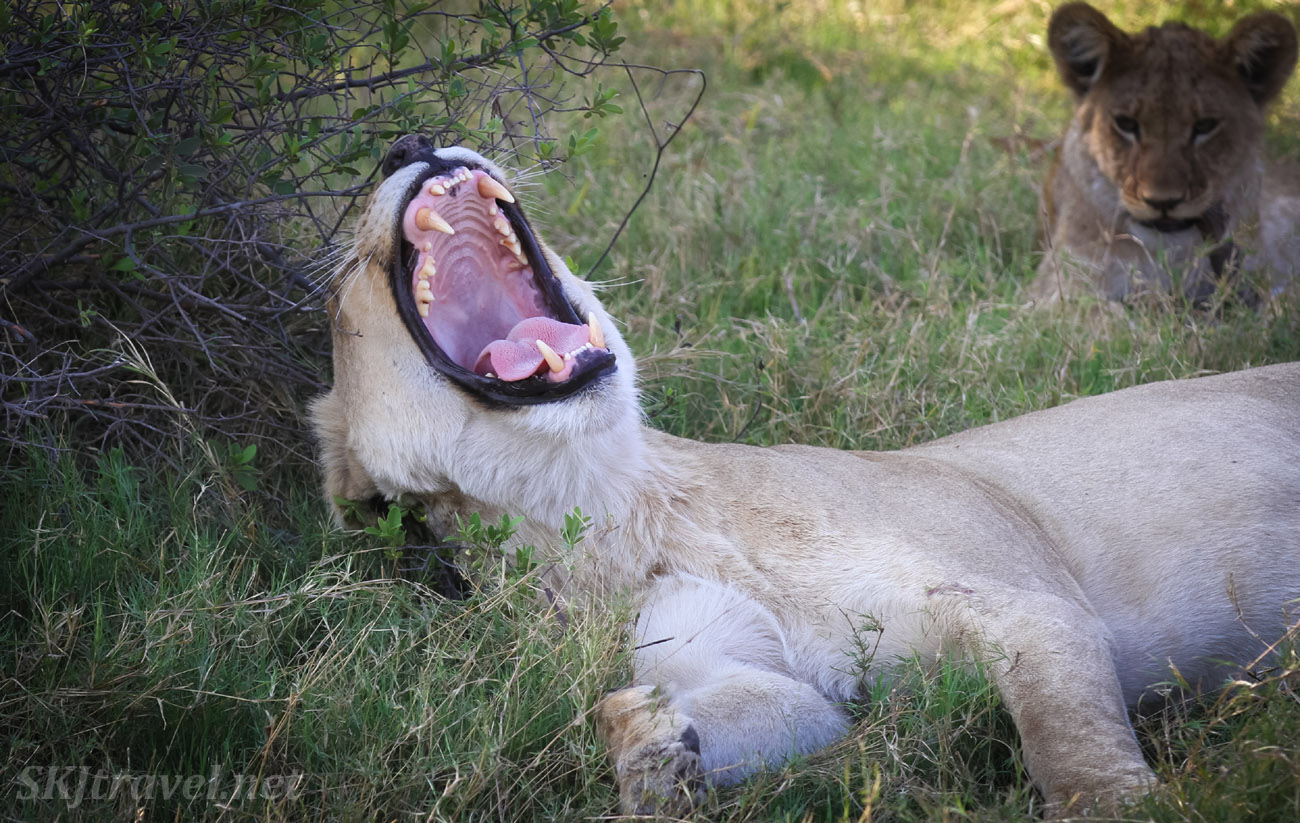 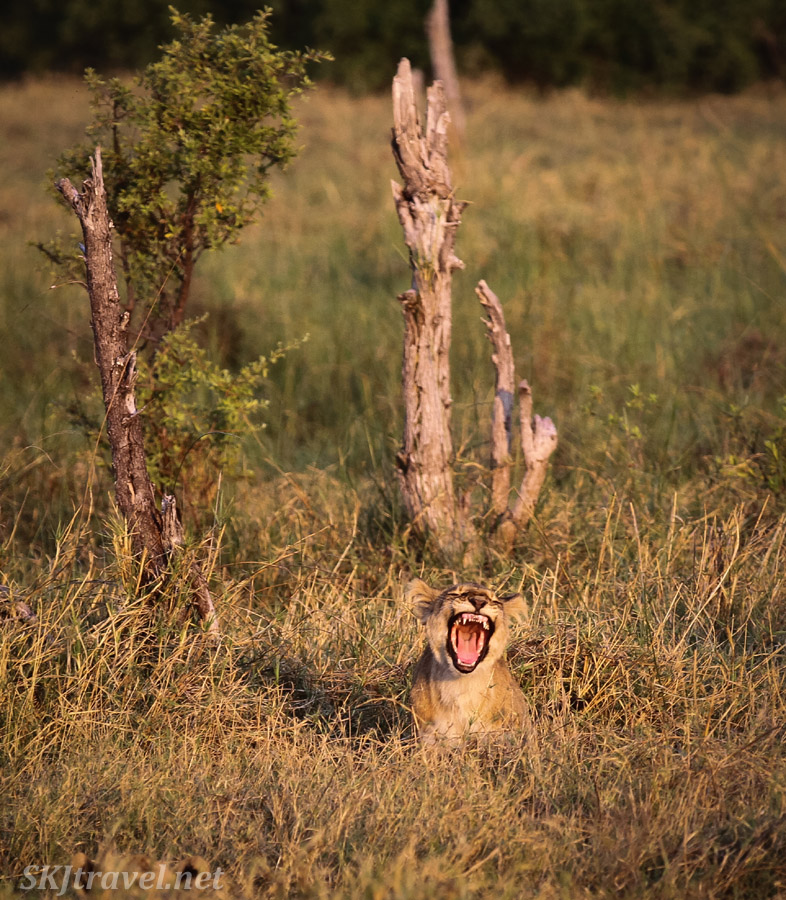 Hope you weren't too frightened by that last photo, it's pretty scary!

The two mothers occasionally nudged each other with affection and seemed to silently communicate their mutual desire to reach their sick sister. They would get up and move the family down the road a little ways and sit contemplating the river. Now, I know you may think I'm anthropomorphizing the lions here, and I don't know how to convey to you the tangibility of their desire, but I assure you it was there. They desperately wanted to cross the river to get to her.

They gathered the cubs up several different times and struck out through the marsh toward the water. Only to be thwarted each time by a crocodile. The cubs seemed to sense the danger even before they got there. The mothers would continue forward until they verified a crocodile was waiting for them, then the whole family would turn around and retreat. They would play and sleep some more, then move down the road to a different stretch of the river, gather together and try crossing again. Again to be turned back by crocodiles. 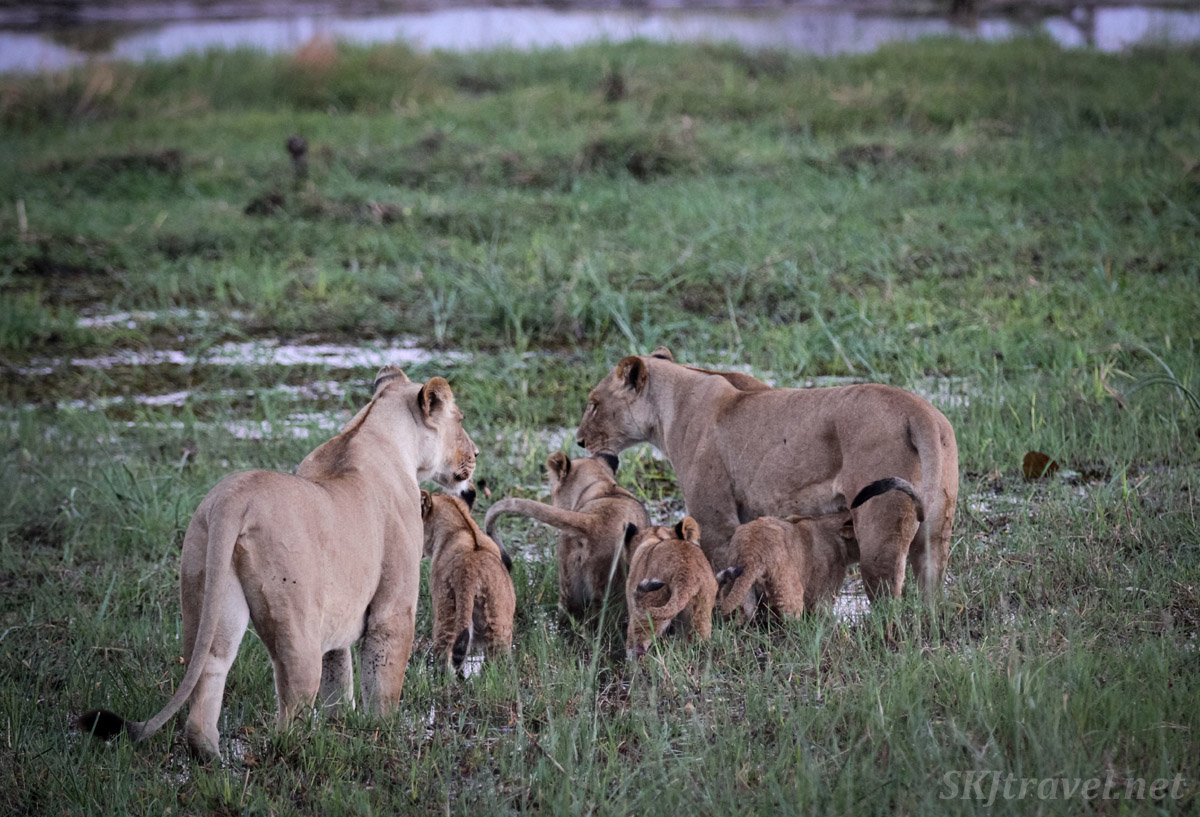 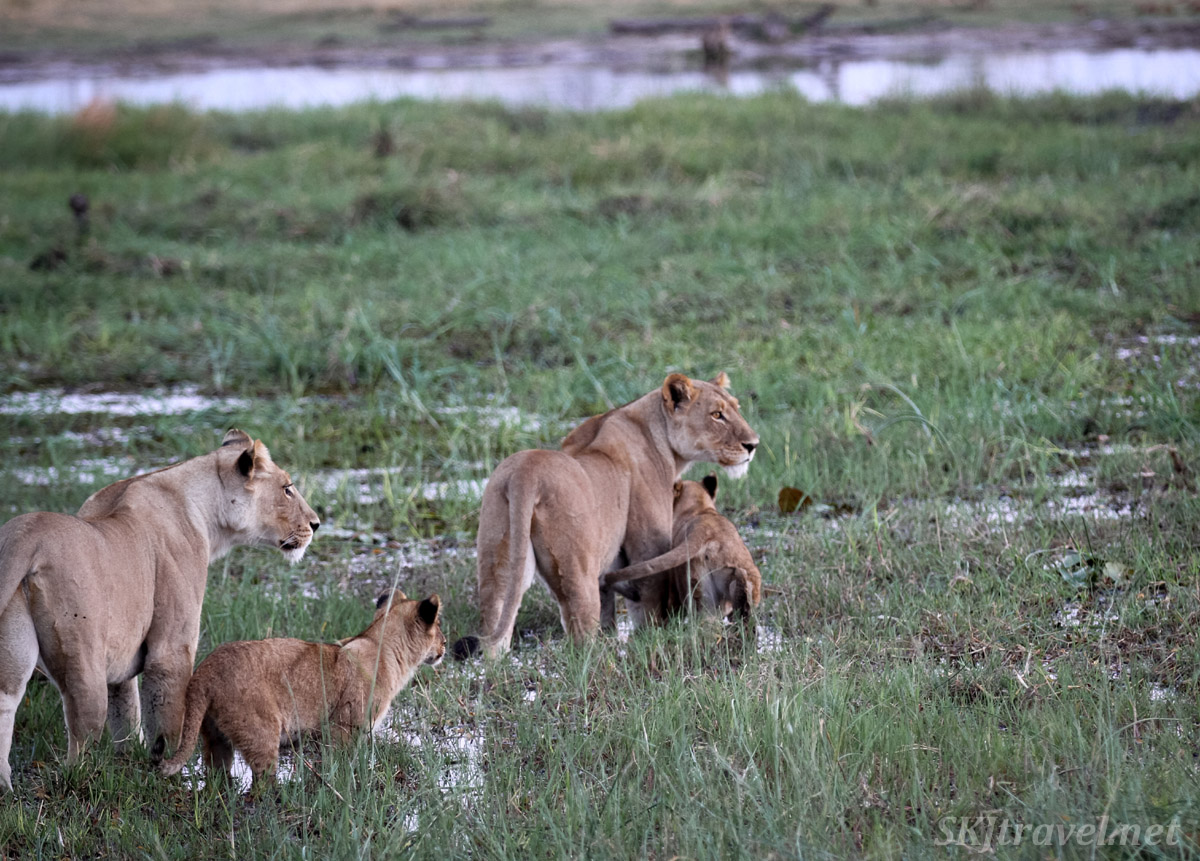 We kept following them bit by bit as they tried over and over to cross. We were rooting so hard for them. And the sister on the other side matched their movements, moving down the river whenever they did. (I don't have a picture of her, I felt so sad for her being sick, I didn't feel like capturing that on film.)

Just as night was falling to where we could barely even see the lions anymore, the family reached a particularly narrow spot in the river and gathered together to try another crossing. Surely, we thought, at this narrow stretch they can make it across. We ourselves couldn't see any crocodiles. There was a fallen log near the water that the lionesses climbed up on to survey the crossing, and suddenly one of them jumped up straight into the air and batted at a crocodile who'd been lurking on the other side of that log. She let out a bone-chilling roar and growled as she swiped viciously at the croc.

The family turned and began retreating yet again, but it was too dark now for us to track them. They disappeared into the night. The little family and their stranded sister. I don't know what happened to them. A drama with no conclusion. That's the way it is when you can only pass through. The next day we moved on to an adjacent park, but the lions still filled my head and heart ... I felt so wonderfully fulfilled while I watched them play and interact the day before, and now I feel a melancholy emptiness where the gate to their story remains open, and will always remain so.

Read more tales from Botswana and the Okavango Delta