The Leopardess: Encounters in Botswana

Female lions are commonly called a lioness. I don’t believe I’ve ever heard reference to a “leopardess,” but I’d like to submit it for your consideration as an addition to the common lexicon of African wildlife.

At the time I began my latest safari in Botswana, leopards had been the big cat I least appreciated and knew little about. I’d seen only one in the true wild, from a distance, mostly hidden by tall grass. I can’t tell you why they were the big cat of least interest to me, why in contrast to cheetahs, lions and tigers, I was somewhat apathetic about them. The animal I most wanted to see close up on this particular safari was a leopard simply because I had essentially not seen one before -- something to tick off "the list."

Early one morning in the Khwai Concessions in northern Botswana, our studious guide got us on the trail of a moving pack of wild African ("painted") dogs, which are one of the rarer animals to encounter in Africa. We found them taking a break, ten resting adults and eight manic puppies romping and playing with the exuberance possessed by all species of children. We watched them until the adults abruptly got up and, upon some seemingly telepathic cue, all took off into the thick weeds. Our guide valiantly attempted to keep up with them and to forecast where they were headed in order to keep ahead of them so we could see them (we were hoping they were going to make a kill). It was a thrilling chase as we drove frenetically through the maze of vehicle tracks, catching glimpses here and there of the dogs running, trying to parallel them as they ran through the bushes where we couldn’t drive, hoping to intercept them up ahead.

Suddenly the vehicle stopped and our guide said quietly with great satisfaction, for he knew the dogs might lead us to this prize, “Leopard.”

I was so beside myself with excitement, squealing, “leopard! leopard!” that I actually did not see where it was. “Where? Where?”

“Shhhhhhh,” our guide had to counsel me. “You need to be quiet! She’s right there. A female.”

I scanned the bushes frantically and then … there she was, peering through a portal in the bush, standing on a fallen log like serenity itself, as if the word had just been created right then around her – she was its embodiment, as if she exhaled the concept and it enveloped her, and as she stepped out of the bushes, it lifted gently from her and escaped into the world. But she was the genesis of serenity. Silently, she stepped down from the log, placing her large paws gingerly on the ground. She moved with the measured grace of royalty, regal in a splendor not ostentatious, rather, of composure and gravity. 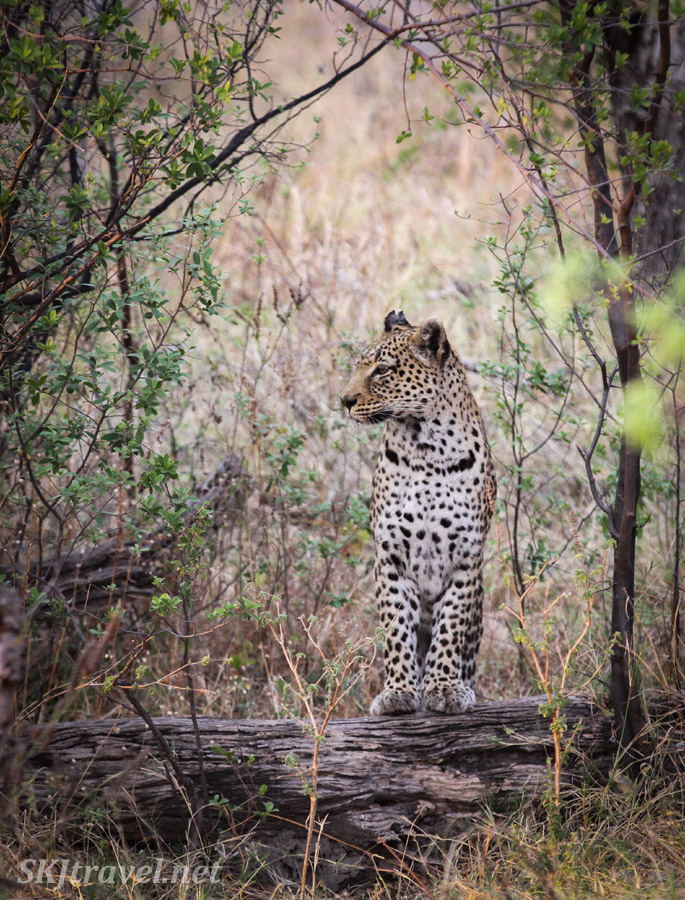 I had been practically panting with the thrill of the chase going after the dogs, careening through the bush in pursuit. When she emerged and strode toward me, I’d like to say that I poetically held my breath, that the world stopped spinning. But I was mouthing the words, trying not to make a sound, “Oh my god! Oh my god!” A curious juxtaposition of my wild and gangly excitement over her calm elegance.

She walked a short distance through the weeds right toward me. 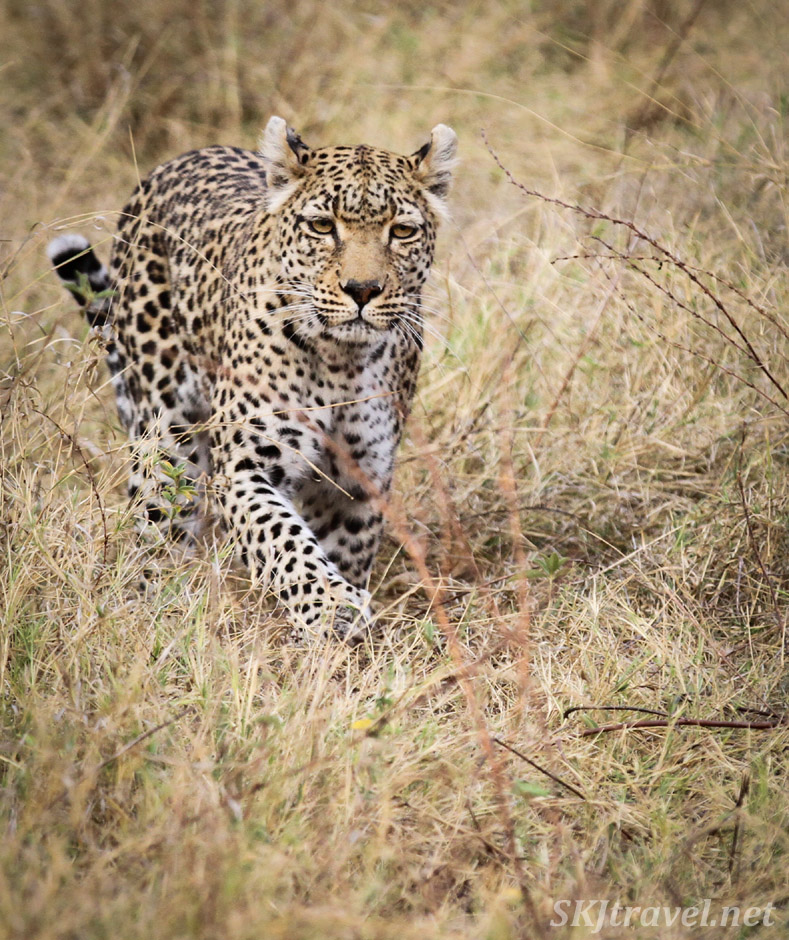 Then she turned away and stood in profile, sleek and feminine with a fluidity of form, her tail artistically curled with the white tip pointed up. She sat down with a detached dignity as if nothing was going on around her -- no wild dogs on the hunt, no humans ogling and clicking cameras. She stood up and walked some more, her gait so smooth, like a puck sliding across glassy ice. The majesty of her presence wasn’t that of a queen, a matriarch, but of a princess, young and desperately beautiful. A leopardess. 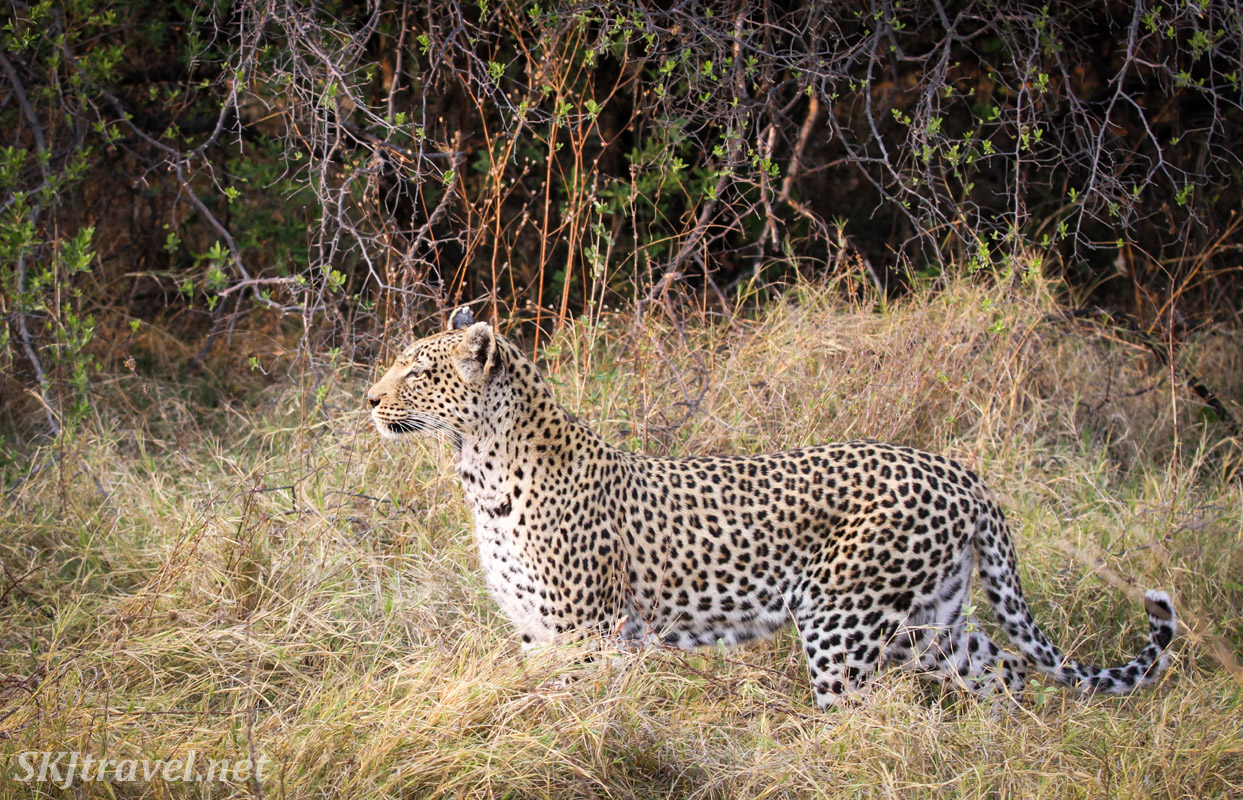 The dogs, historically antagonistic toward leopards, came in closer and she prudently retreated into a tree, adeptly navigating the organic fractal of tree branches as if they were but ripples on water she parted like a porpoise. 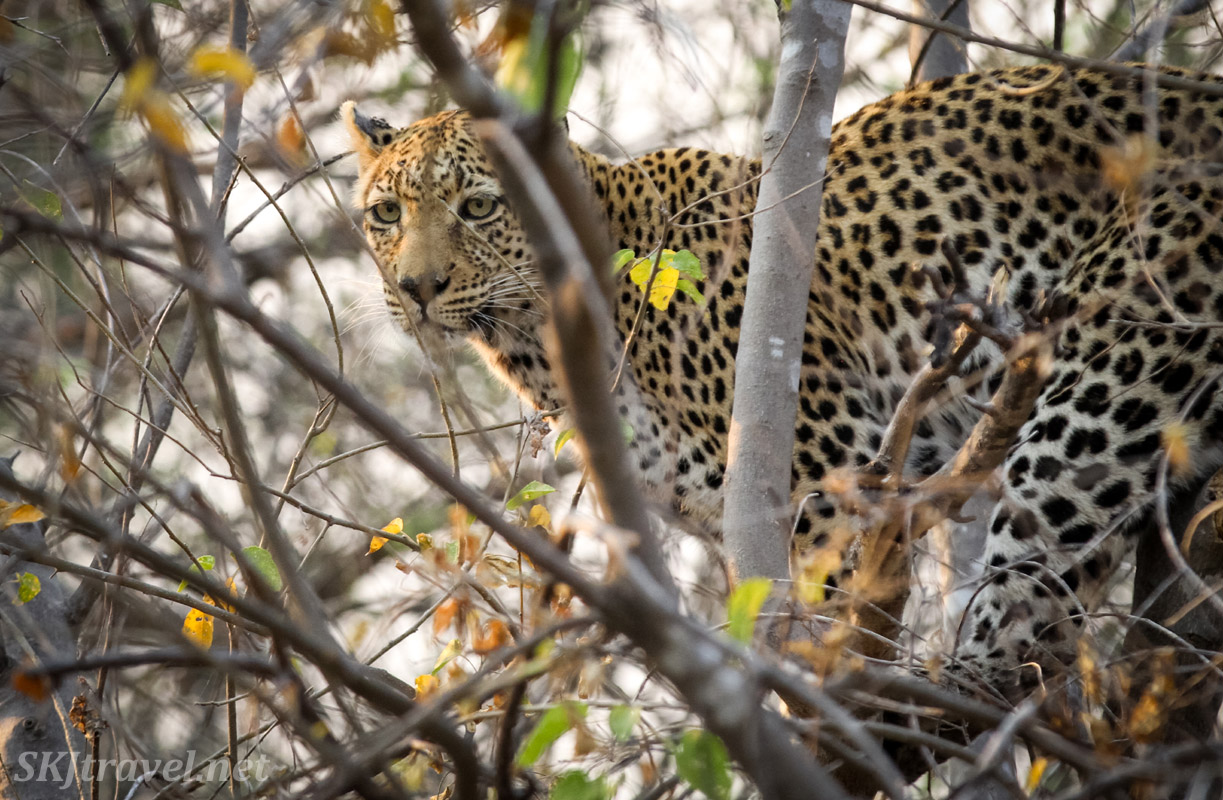 She was not a cornered animal, frightened and cowering. She simply removed herself from the reach of her adversaries until they moved off, and then she descended to disappear into the bush like a whisper from the mouth of a dream. 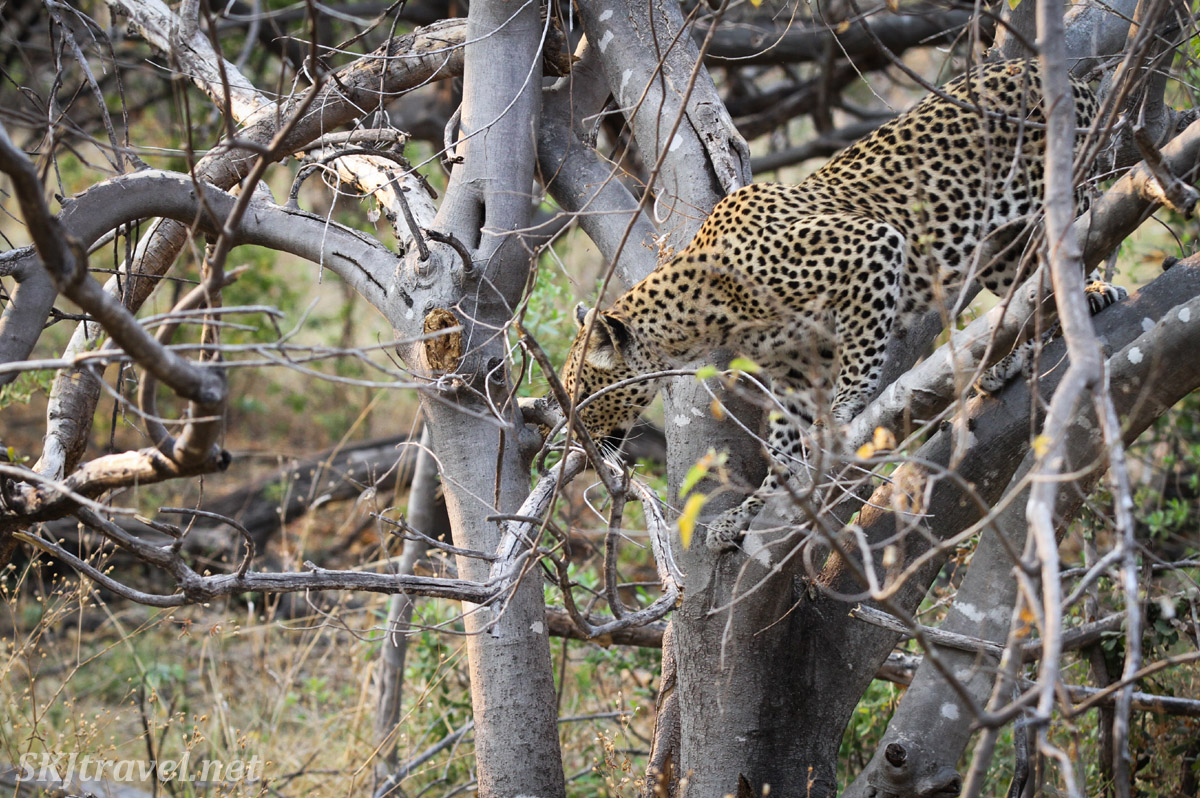 While we continued to have many more outstanding animal encounters, this one of the leopardess emerging from the woods remained singularly magical because it was so much more than just a visual encounter to touch this animal's nature as if it were as tangible as her fur ... a nature which is calm but not gentle, for it is predatory. Within this contradiction of a powerful predator making such delicate passage through the bush, lies a profound poise.

A couple days later, we saw another leopardess posed on a trail sign, completely self-possessed, like the first one. 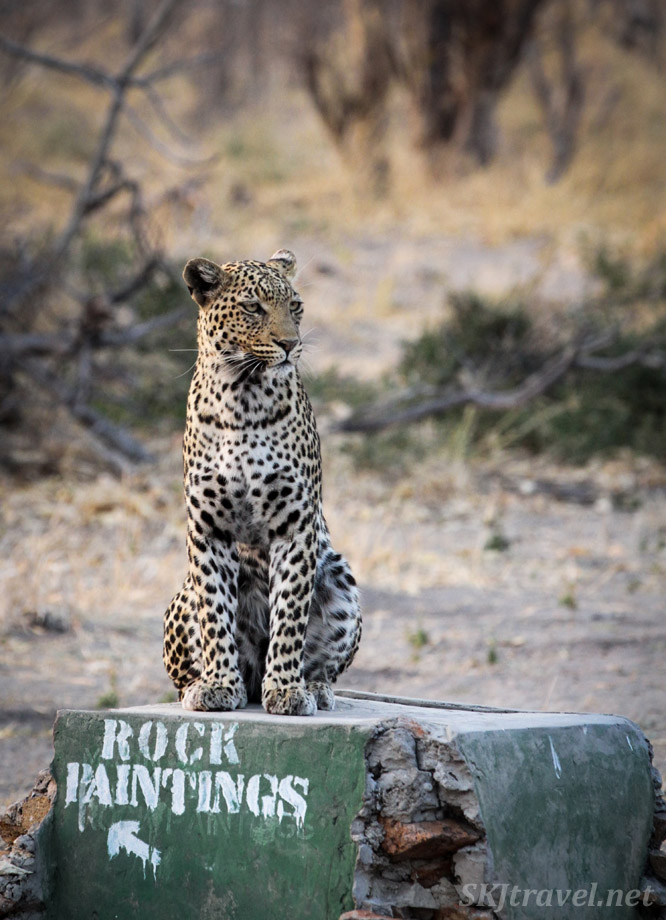 She alighted to the ground and began stalking an impala in the distance. Leopards can direct register, placing the back paw in exactly the same place as the front paw, enhancing their predatory stealth. With intense focus on the impala she lowered her body and lifted each paw slowly and purposefully, placing it back down as if the earth was an eggshell that would crack under a more careless weight.

She sat down in the bushes and pondered the unsuspecting impala until a pair of kory bustards bumbled in and gave her away with a set of alarm calls. 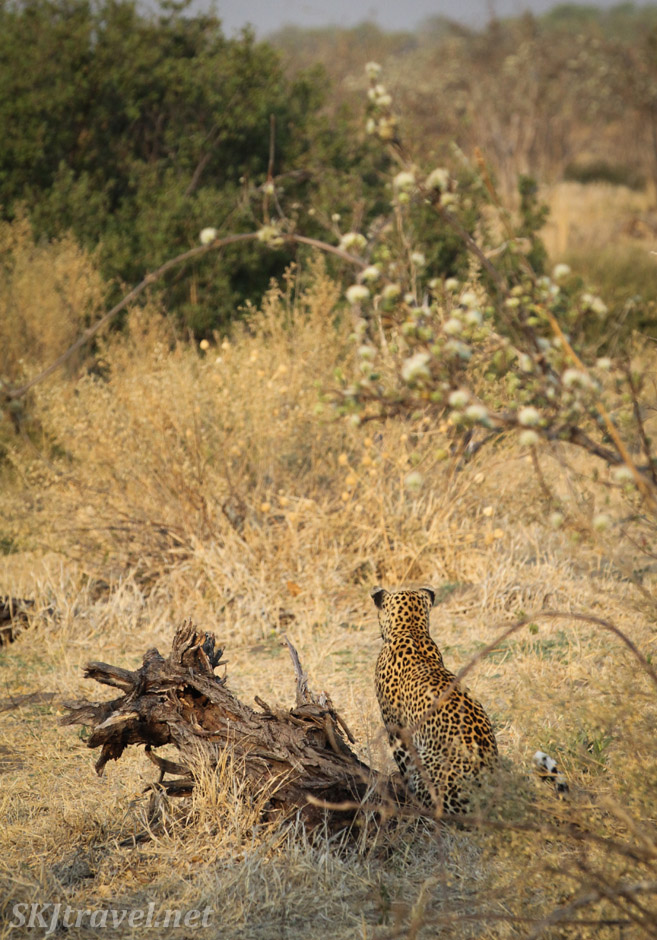 The impala left. And before she left, the leopard princess turned her spotted head back toward me briefly.

The milky eyes of a leopardess belie a dispassionate peace. They are like no other I've ever seen in the animal kingdom ... rendering her an impassive observer of her world. I don't know how to explain it or describe it, but this indifferent countenance is ethereal. 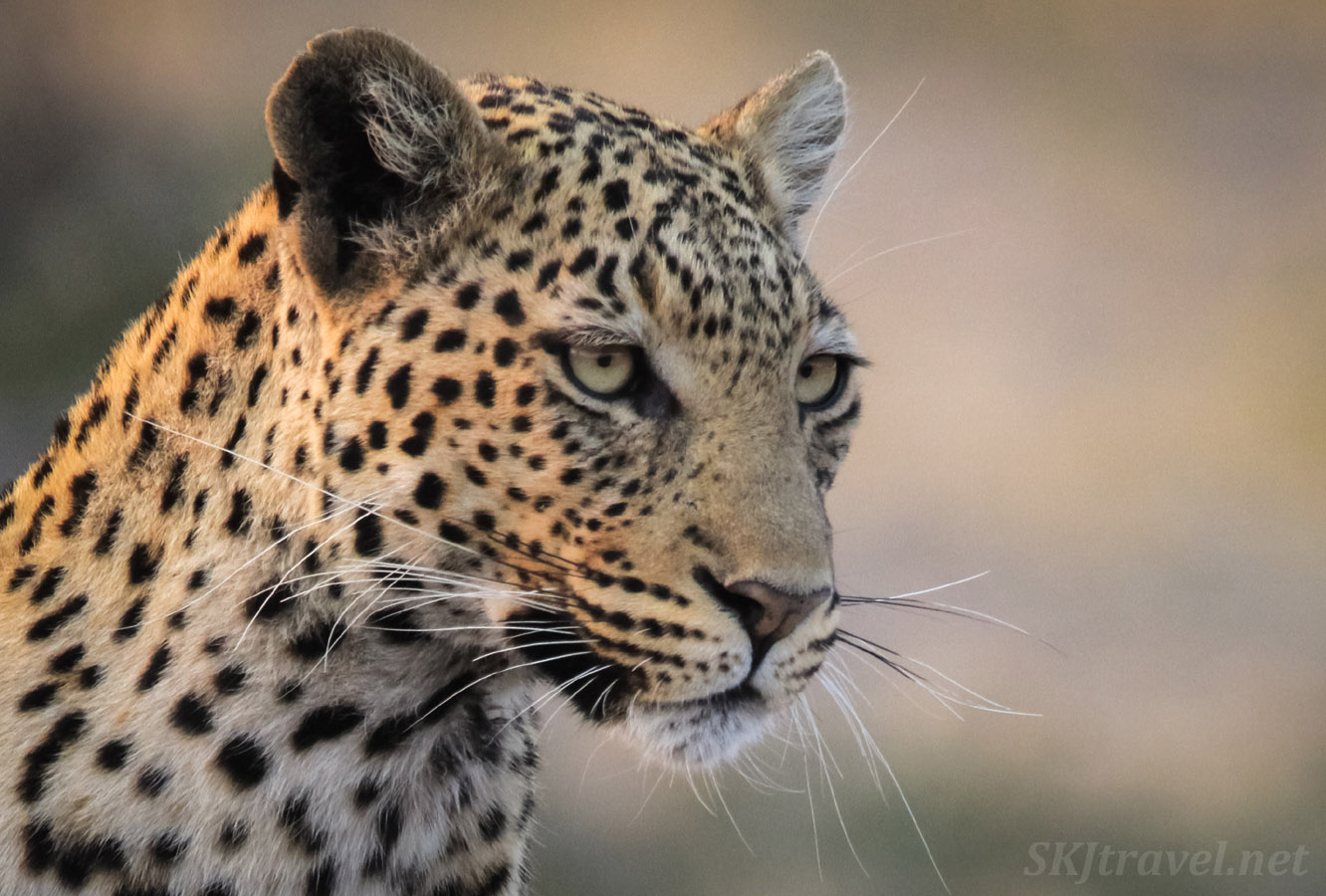 She stepped into the bushes and disappeared into her secret world. But I learned then that a leopardess is never completely absent from the landscape. For in the rounded contours of her paw print, she leaves behind a soft longing in the pith of the souls who watched her. I think if she were not to emerge from the bush again, she would break the heart of Africa. 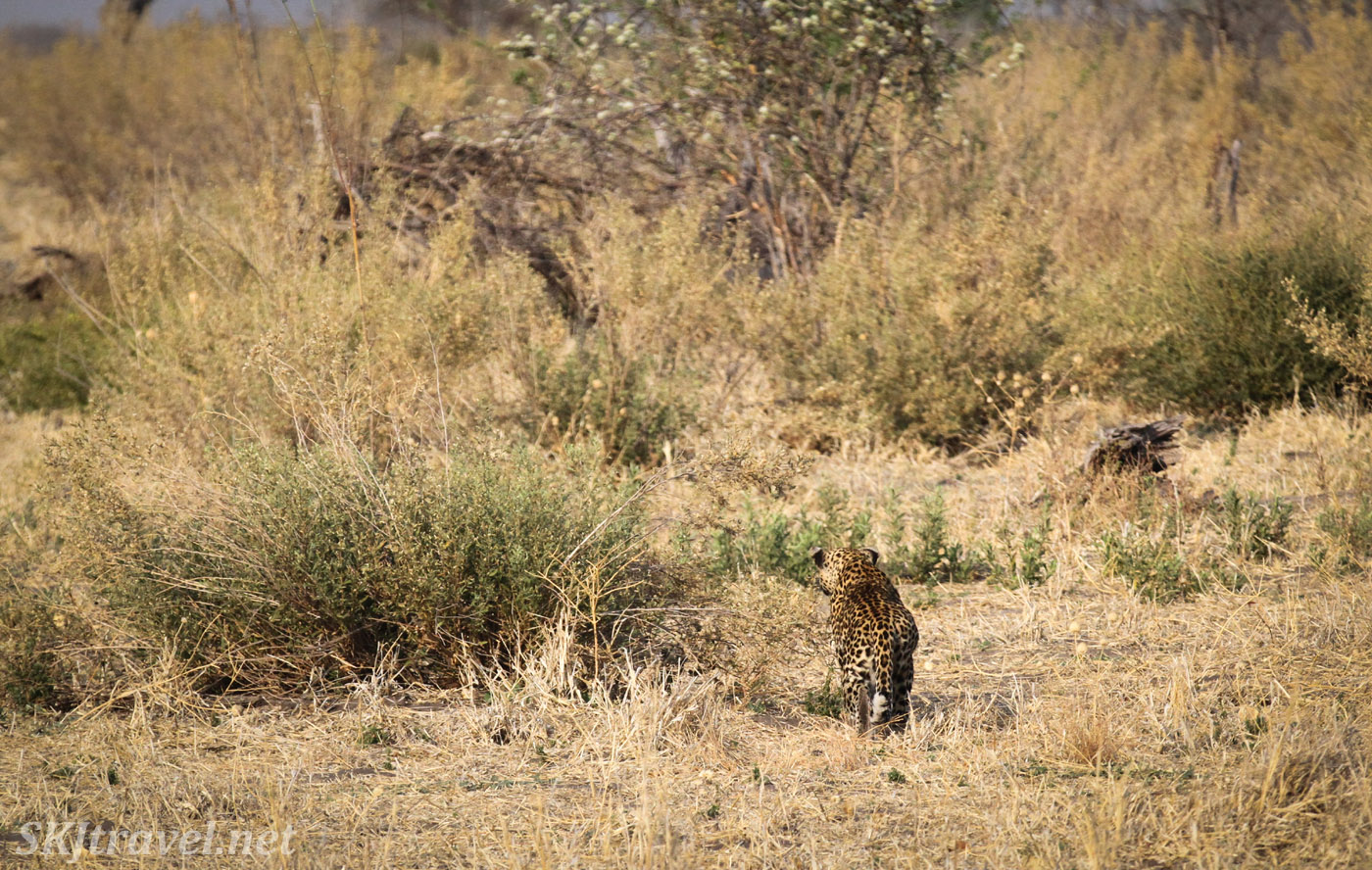