Another of our favorite 3-hour tours from my home in Nederland, Colorado, is the 4x4 route over Kingston Peak pass. This one is a bit of a doozy in places -- definitely the most difficult terrain we have yet explored. Well, save one stretch of trail we did years ago in Jenny Creek that took us about 45 minutes to move about 3 feet forward. Our 4-Runner, Trusty Trudy, was precariously balanced on only two wheels -- one front wheel and one back. As we inched forward, literally inch by inch with me spotting continually and Erik getting out to survey and strategize every few inches, I also had to hang off the outside of the opened driver's-side door with all my weight to ensure Trudy didn't tip over on her passenger side. It was clear from various forms of evidence that previous travelers had spent a long time trying to get past this spot, as well.

The first time we attempted Kingston Peak with Trudy, we were turned back by one egregiously large boulder on a steep skree slope. Later that summer we made a second attempt and met with success. This year we have a new ("new" 1999) 4-Runner named Chewbacca. Chewy is a beast on this terrain with higher clearance than Trudy and a mean grunt in low gear. We love him. We started trying to get to Kingston Peak early in the summer. Every two weeks we went out, as the snow melted we got higher and higher each time. It was I think our fifth outing when the snow had finally melted enough for us to summit. We just chugged right over that boulder that had given Trudy such a headache. We then went over the route a second time in late August when we took a friend out to show him what our backyard had to offer in 4x4 trails. As you may have read in the Gamble Gulch post, most of these trails originated as old mining roads ... people were crossing them in wagons.

So by now we have crossed this terrain in early, mid- and late summer. So I present to you a little photo tour through the seasons. If you are thinking of trying this route yourself -- from Mammoth Gulch Road over Kingston Peak to Fall River Road -- know that I'm not understating the requirement of a high-clearance vehicle with low-4 gearing.

The wildflowers along the lower part of this route (upper Mammoth Gulch) are spectacular. The season begins with a sea of yellow pea in bloom dotted with clumps of our state flower, the blue columbine. 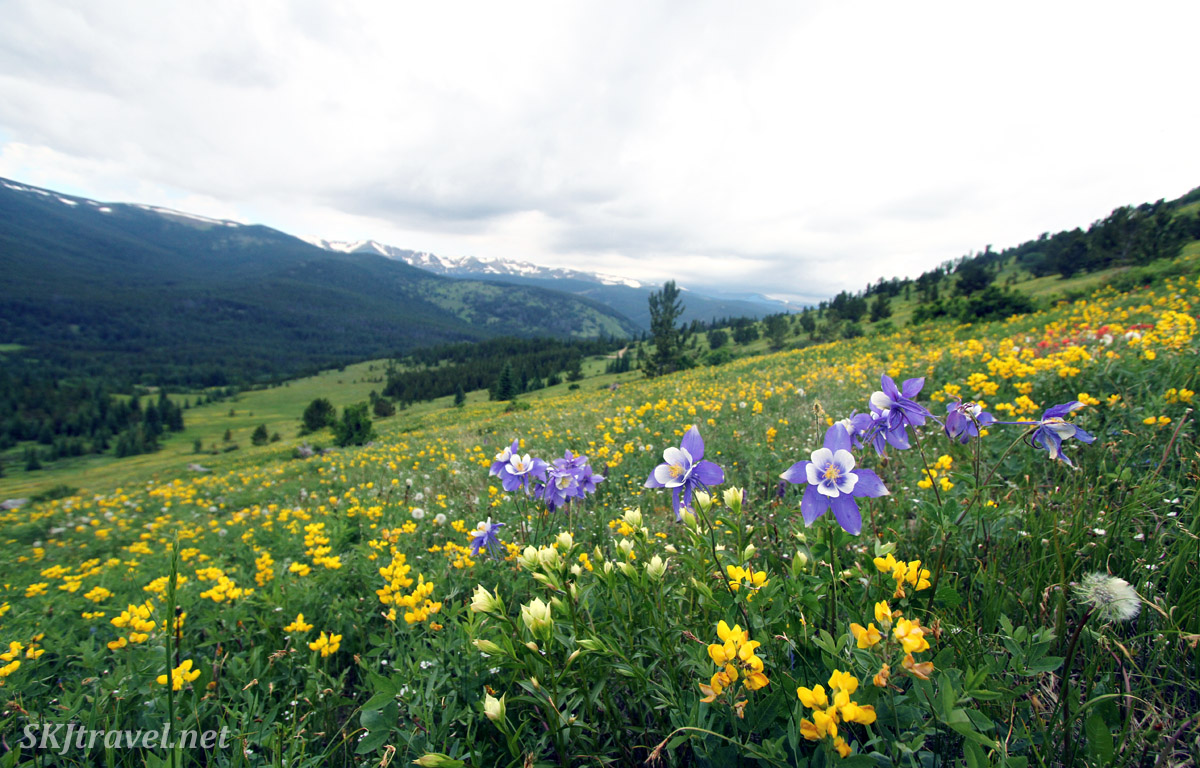 Next, the red spikes of Indian paintbrush take over the landscape, and these can last most of the wildflower season. (FYI: Cozy & Quiet B&B is my guest studio I run in Nederland ... some of these pics were posted to its Facebook page, hence the C&Q watermark) 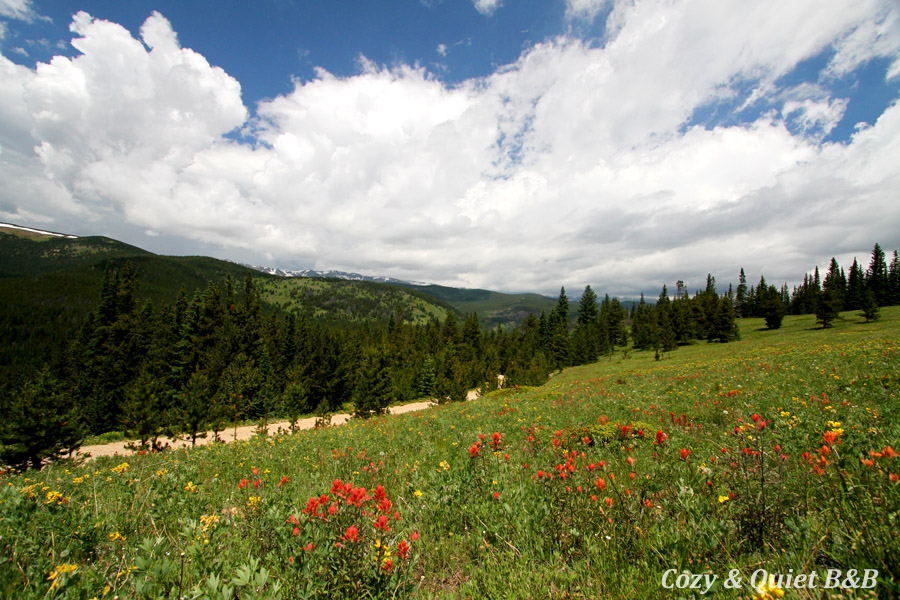 We love collecting wild raspberries from this area. I'll keep it a little secret precisely where we go ... there are many side roads. :) The character below is our new guy, Chewbacca. 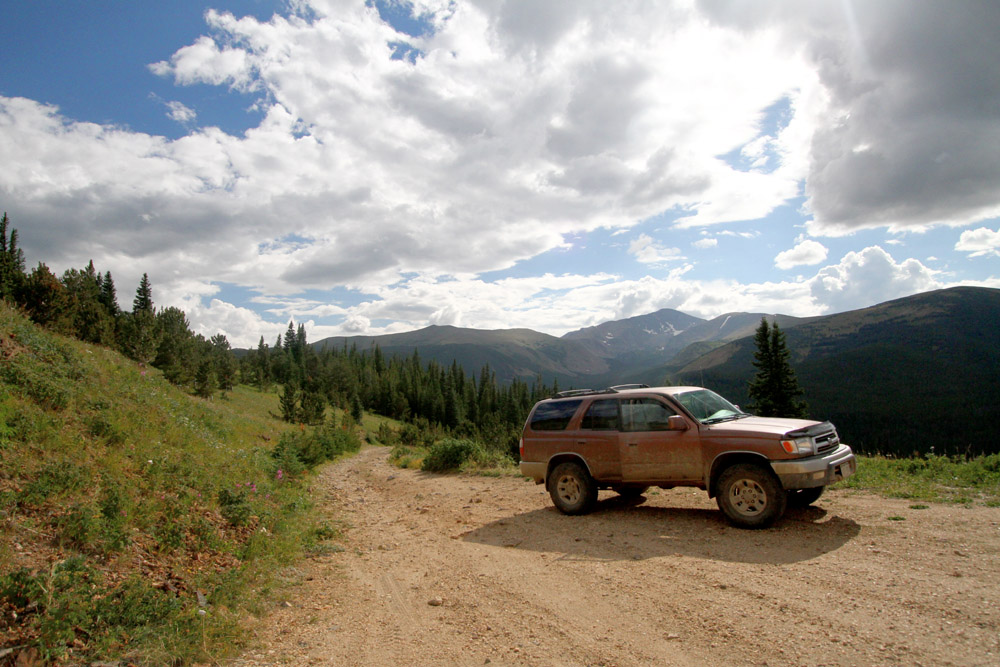 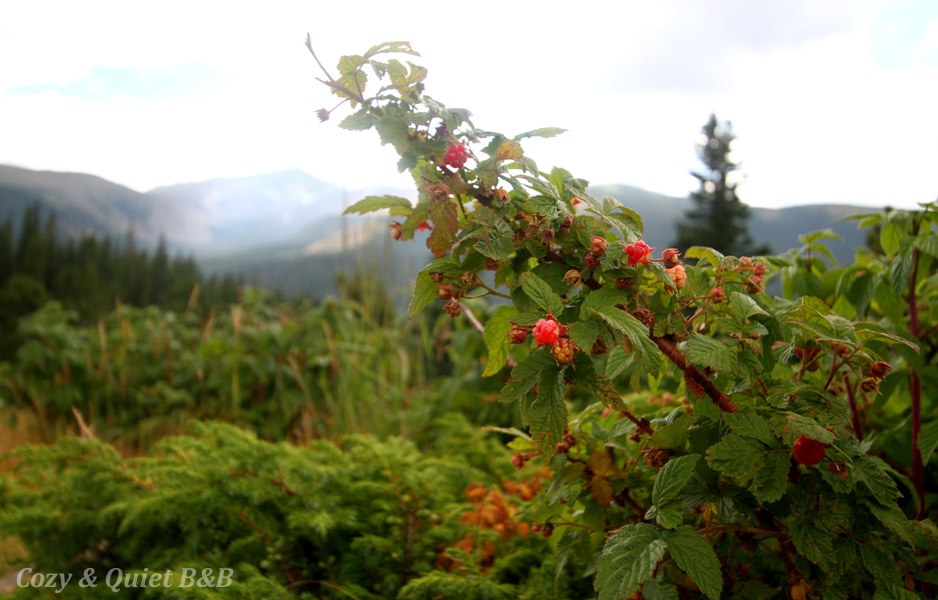 Our first attempt with Trudy ... you can see her hood just peeking up over the horizon of the trail and Erik walking back toward her after we left her temporarily to see if there were any other show-stopping obstacles ahead. 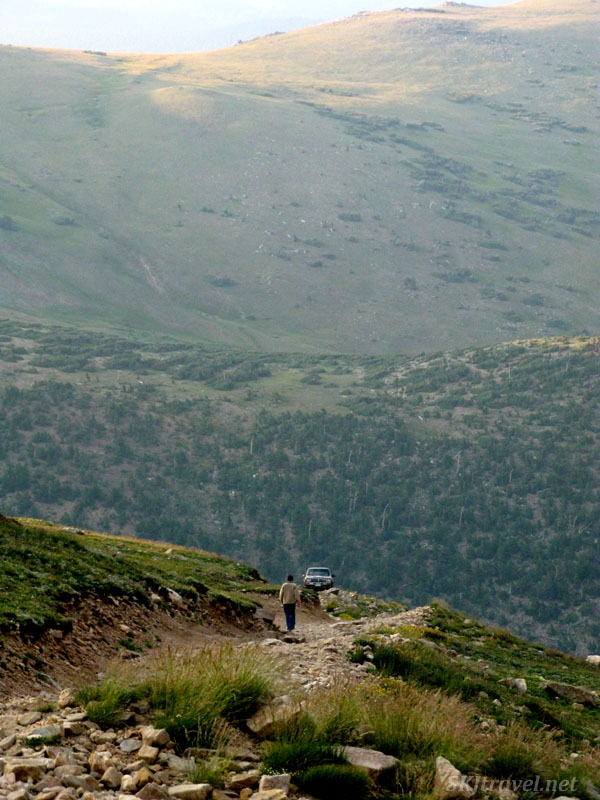 Our second attempt with Trudy ... success and the reward of copious wild bluebell flowers, also called harebells, which I absolutely love. As you can see, we were traveling at our usual time of late in the day. 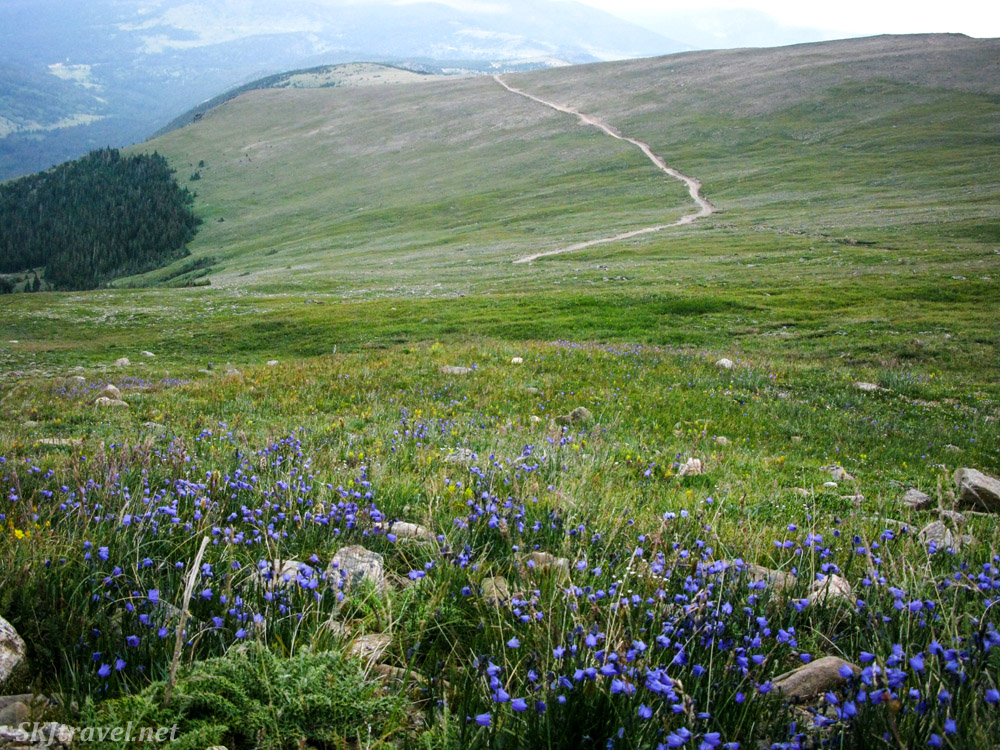 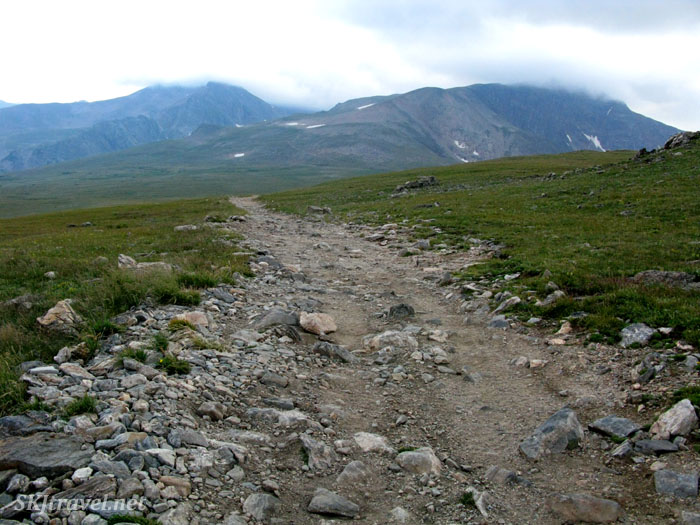 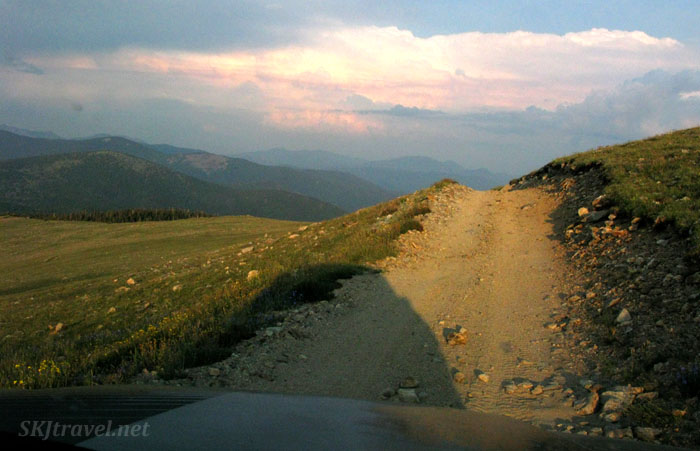 After crossing the pass above timberline, the route drops into Fall River Road beside St. Mary's Glacier near Idaho Springs. (these days, we call it more of a glacier-ette) 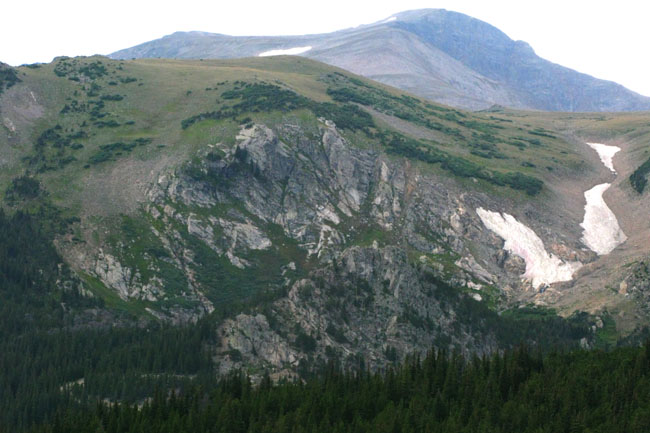 This year when we made our first crossing, I was very excited because it was a rare blue sky above the mountain peaks and we could clearly see the layers and layers of mountains heading back into the heart of the Rocky Mountains. I had brought my camera and as I clicked the shutter with glee for my first pic, my smile turned a little upside down when I realized there was no memory card in the camera! I had left it in my computer from downloading some other pics. So the beauty of that day is just in my private memory. The next time we crossed it with our friend in late August, we had pretty much the polar opposite sky ... low and heavy with fog and rain. But it lent the route an air of secrecy and mystery. By now the green grass was largely turning to gold and red.

Chewy seems like such a sizable truck until you get a little perspective of his place in the mountain landscape. 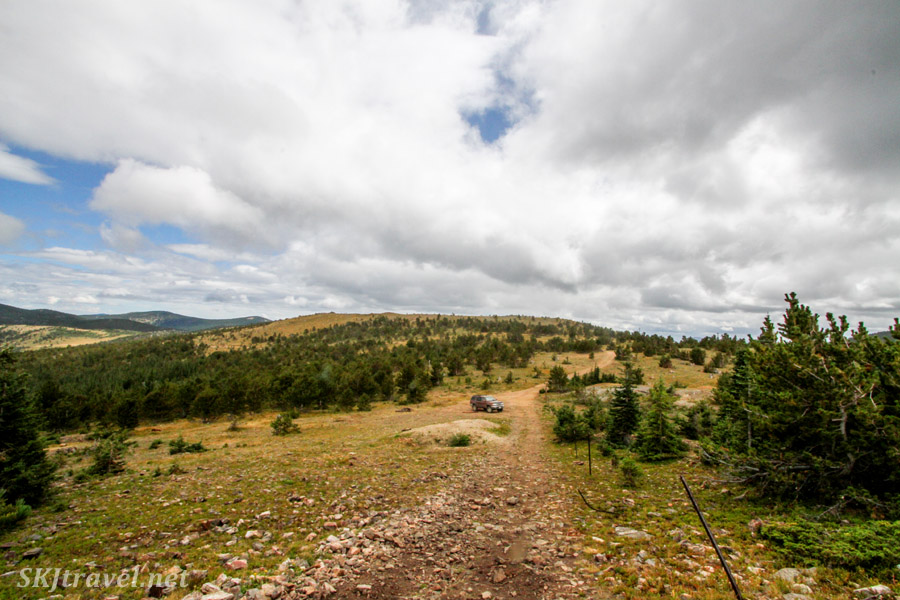 I've never been to Scotland, but I envision its highlands somehow like this, maybe just because of the low, heavy mist so iconic to that part of Scotland. The red and gold grasses had a lovely rich color in the rain and midday diffused light. (we started earlier than usual on this day) 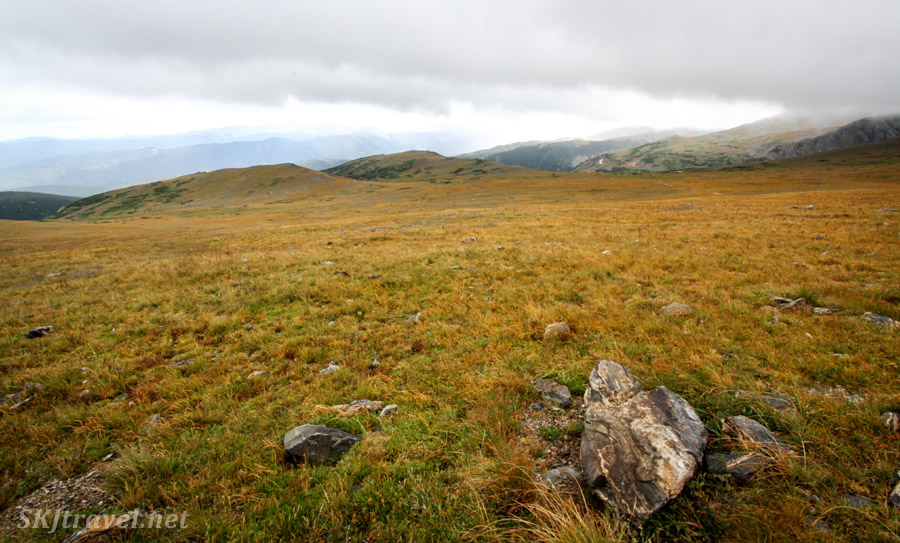 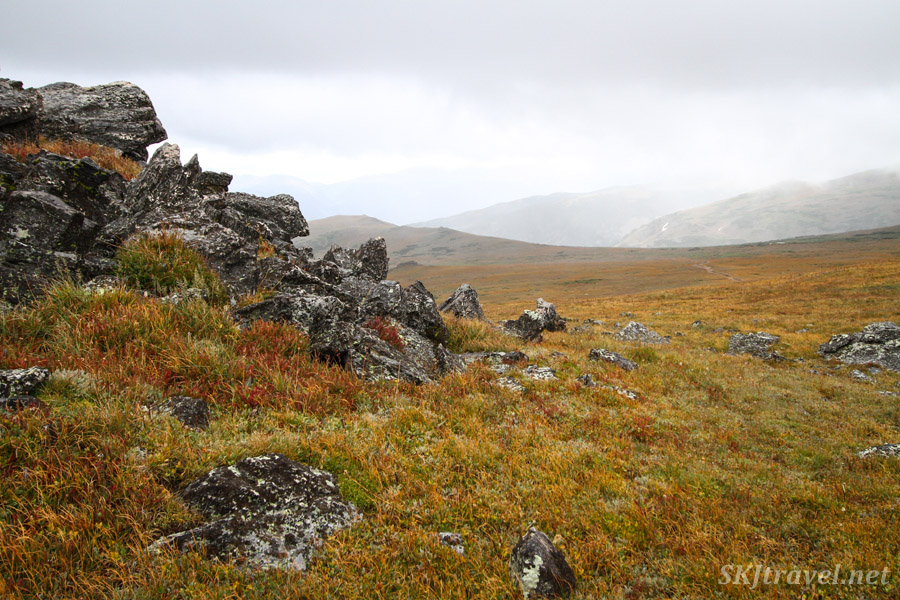 We got out to hike a little ways to see the mountain lakes below (my friend is a marvelously accomplished photographer and was very keen to walk about with his camera). You can just spy him and Erik as little black pixels off on the upper right-hand side of the photo. It started raining quite substantially and I stopped to try to get some pics of my beloved harebells without kneeling in the soaked grass, as my feet and head were already soggy. Sort of got a pic ... In standing up I banged my shin on a rock and between that pain and being wet and cold, I didn't forge on to see the lakes. That will be a gift for me another time. (p.s. you can view all these pics at larger size by opening in a new tab) 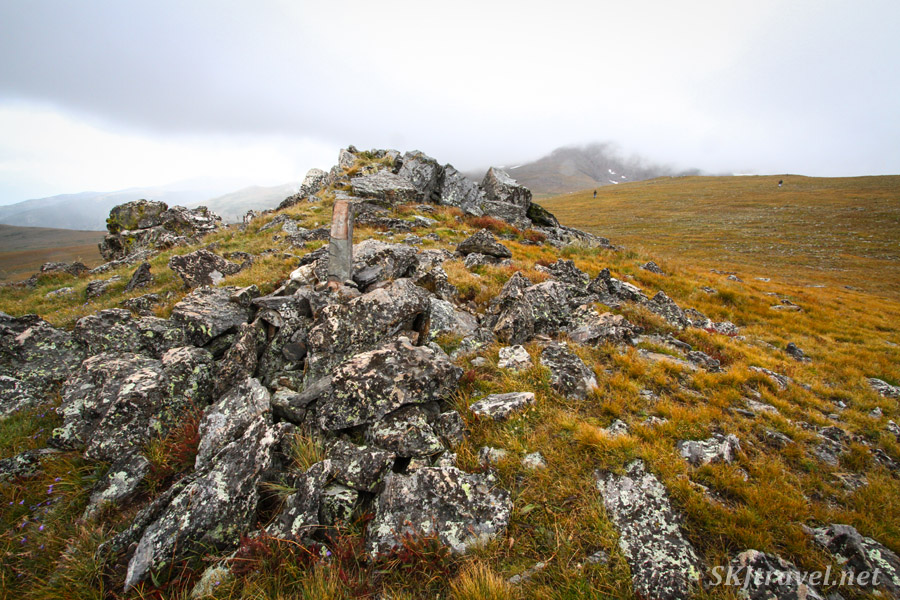 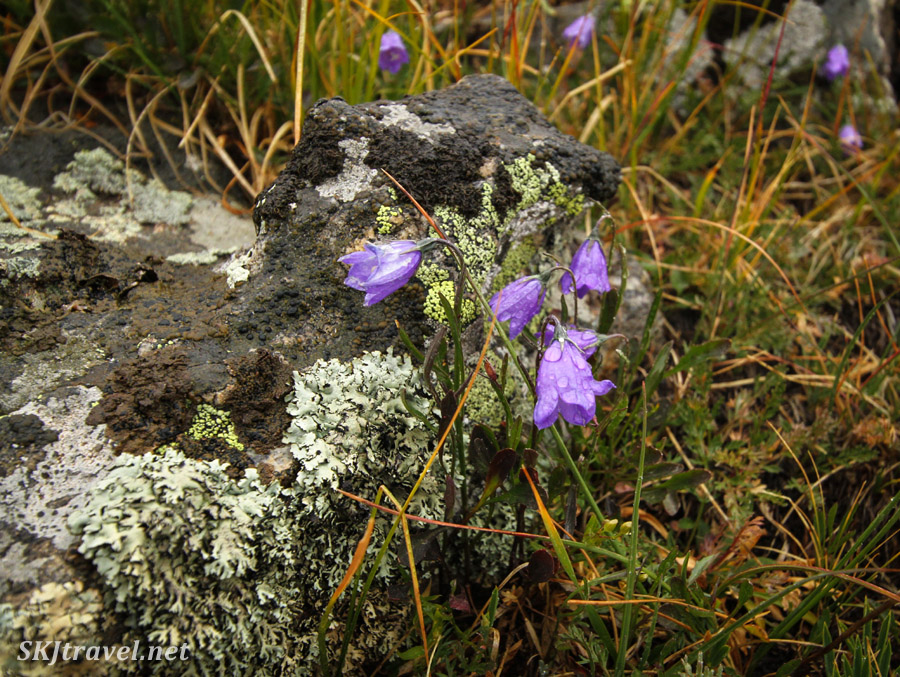 Once you start descending the other side down toward Fall River Road, you are treated to a Seussian forest of wind-sculpted trees. Can you guess which direction the wind blows? :) Some day I would spend more time exploring this little forest that marks the beginning of treeline. Such fantastical shapes and colors in the trunks. 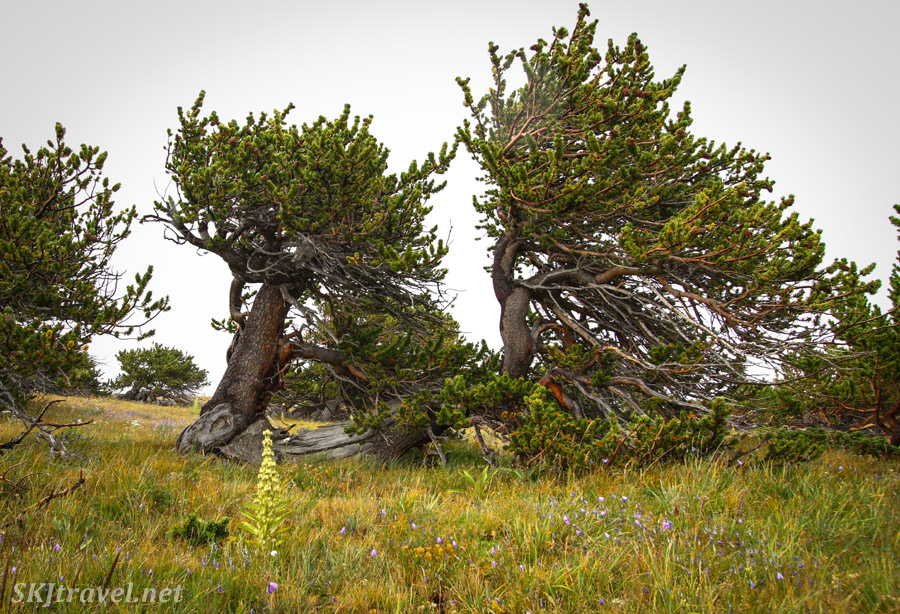 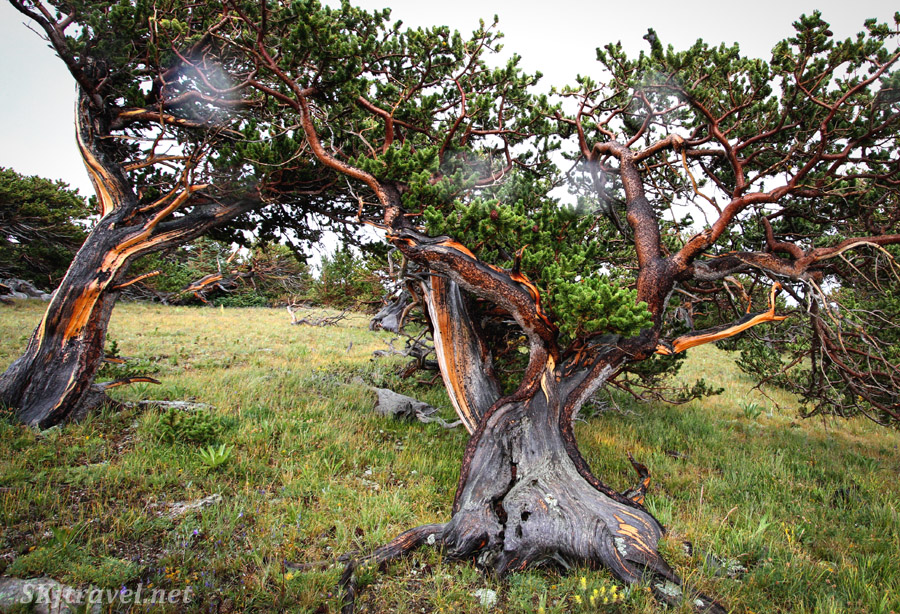 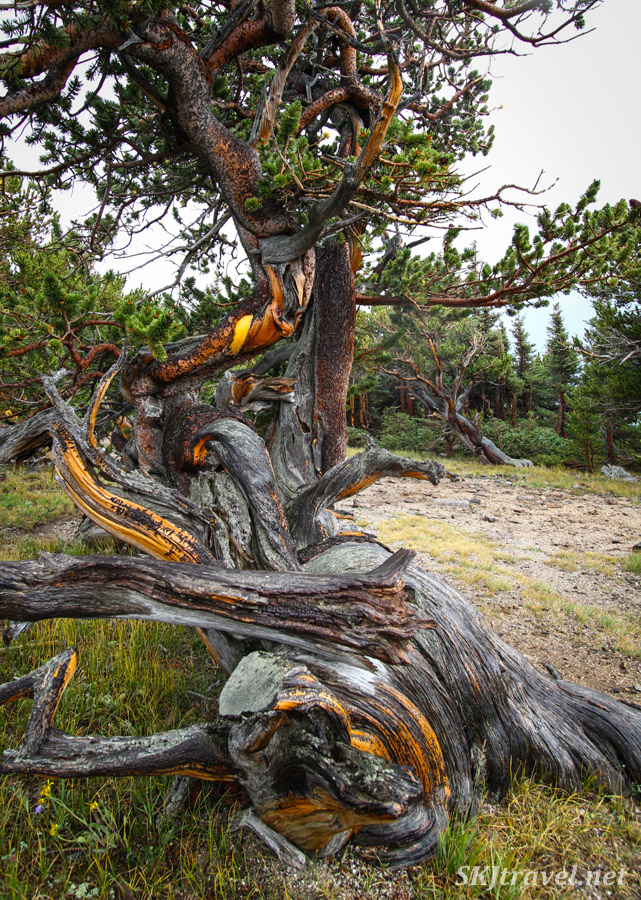 The doors of summer are closing already this year. But I imagine, as we've become quite fond of this route, that we will be back soon. And maybe my memory will allow the inclusion of a memory card inside my camera!

Stay with me near this 3-hour tour!

Check out the excellent photography of my friend, Garett Gabriel, much of it taken in Colorado in the Nederland area.